Van Gogh’s astonishing week in the asylum, 130 years ago—when he painted an olive grove and a starry night

By coincidence, both pictures ended up at New York’s MoMA, which is now planning a redisplay 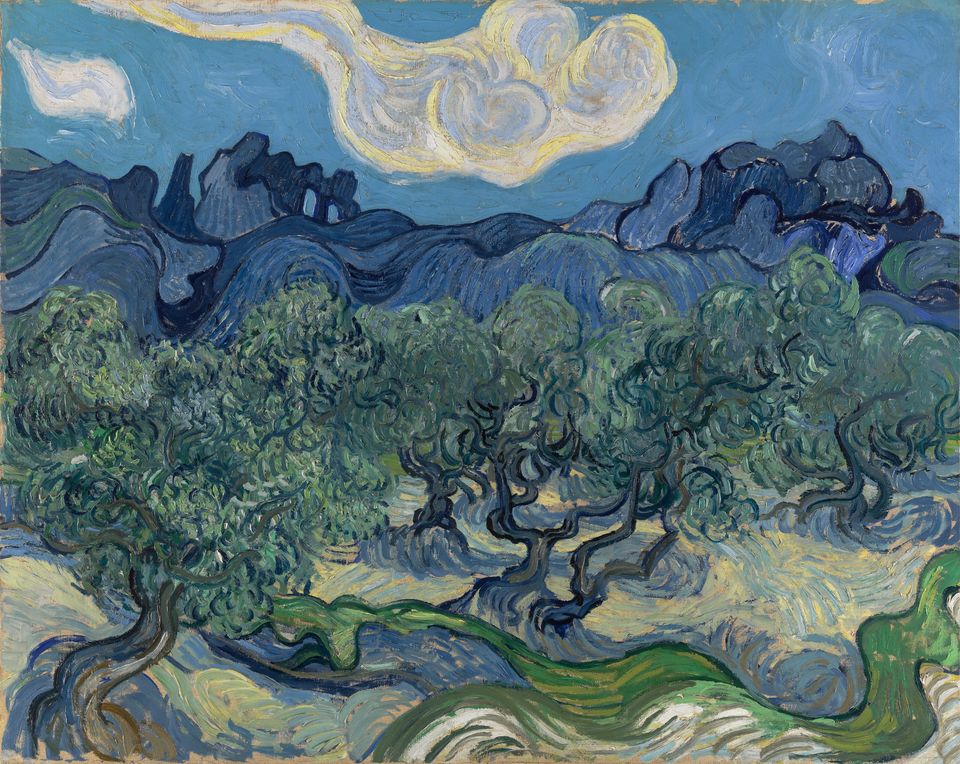 In the space of a single week, exactly 130 years ago, Van Gogh completed five of his finest Provençal landscapes. The greatest of these—Starry Night and Olive Trees with Les Alpilles—were by sheer chance both eventually acquired by New York’s Museum of Modern Art. MoMA closes tomorrow (15 June) for building work and a rehang of the collection. When it reopens on 21 October, hopefully the two Van Goghs will be hung in close proximity, enabling visitors to appreciate them as a pair.

Although Vincent was living in the asylum of Saint-Paul-de-Mausole, when in good health he was allowed out during the day to paint in the surrounding countryside. On 16 June 1889 he wrote that he had just done three landscapes: “an olive grove” (now at the National Gallery of Scotland, Edinburgh), “a field of yellowing wheat” (National Gallery, Prague) and “a field of wheat on the slope of the hills” (Ny Carlsberg Glyptotek, Copenhagen). All three, finished within a few days, are outstanding works.

Two days later Van Gogh reported that he had completed a couple more paintings, so he had probably done five in a week. One of these was Olive Trees with Les Alpilles (MoMA), depicting a grove just outside the asylum with a crest of hills in the background. The two holes in the craggy peaks do not come from the artist’s imagination, but represent a dramatic limestone formation known as Les Deux Trous. 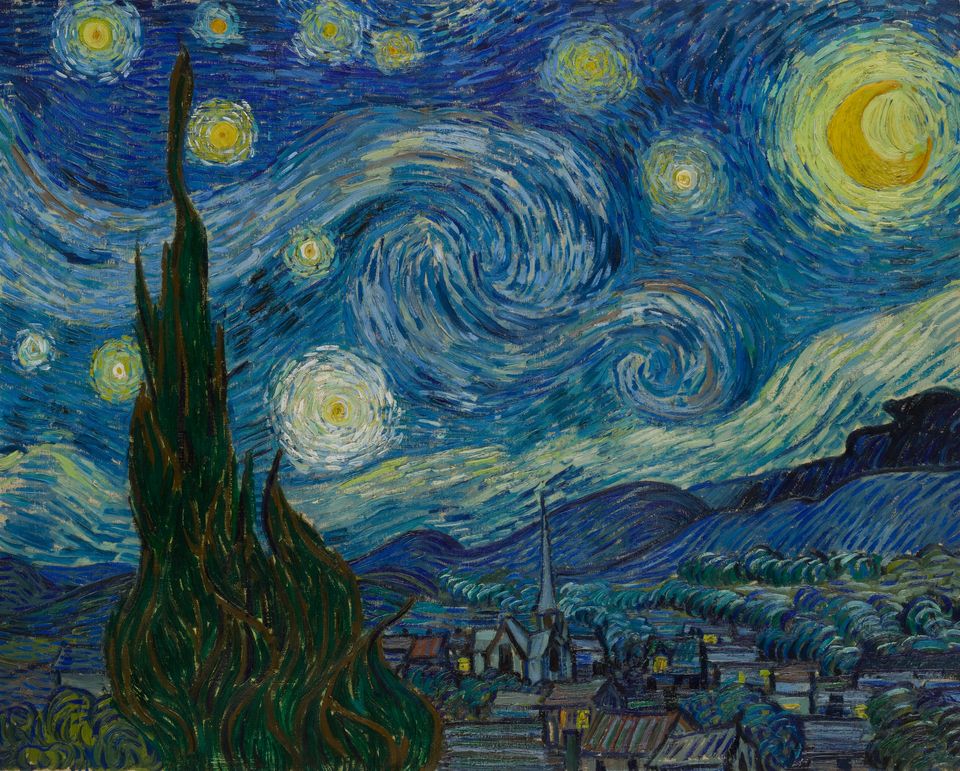 The final painting he had finished by 18 June was a masterpiece, Starry Night (MoMA). In the landscape part of the picture a village nestles around a church which is reminiscent of the nearby small town of Saint-Rémy-de-Provence. In the painting, this settlement is surrounded by olive groves and soaring cypresses, set beneath the hills of Les Alpilles. But of course it is the night sky which makes this such an amazing work.

Van Gogh certainly saw similarities between Olive Trees with Les Alpilles and Starry Night. As he wrote to his brother Theo: “The olive trees with the white cloud and the mountains behind, as well as the rise of the moon and the night effect, are exaggerations”. By this, he meant he had used his imagination. He also commented on the “contorted” lines of his brushstrokes.

Both paintings show the same hills in the background and are mainly executed in blues, greens and whites, dotted with glints of yellow. The azure sky of Olive Trees with Les Alpilles with its elongated cloud calls to mind the wave-like surging form in Starry Night. One is a daytime scene, the other a night picture.

Van Gogh could not sell his work and this pair of paintings were together in 1906, when Jo Bonger (Vincent’s sister-in-law) sold them to separate buyers. So how did they end up together at MoMA? It was pure chance, but very fortunate.

Starry Night went to Georgette van Stolk, from Rotterdam, who hung it in her conservatory (fortunately it escaped damage from sunlight and damp). In 1941 Starry Night was acquired by MoMA, in exchange for two works by Cézanne and one by Toulouse Lautrec, becoming the first Van Gogh to enter a New York museum collection.

Olive Trees was bought in 1906 by the German collector Karl Osthaus and by 1947 it had been acquired by the New York collector John Hay Whitney, a publisher and later American ambassador in London. His widow Betsey, a former daughter-in-law of US president Franklin D. Roosevelt, bequeathed the Van Gogh to MoMA in 1998.

Although the two pictures done on the same days are not pendants, they are closely linked and deserve to be seen together. Appropriately, both are in similar frames. MoMA’s curators are now planning the full rehang of their collection, and in October visitors will be able to once again see them in close proximity - although the constant crowd swarming around Starry Night may make it more difficult to enjoy them together. 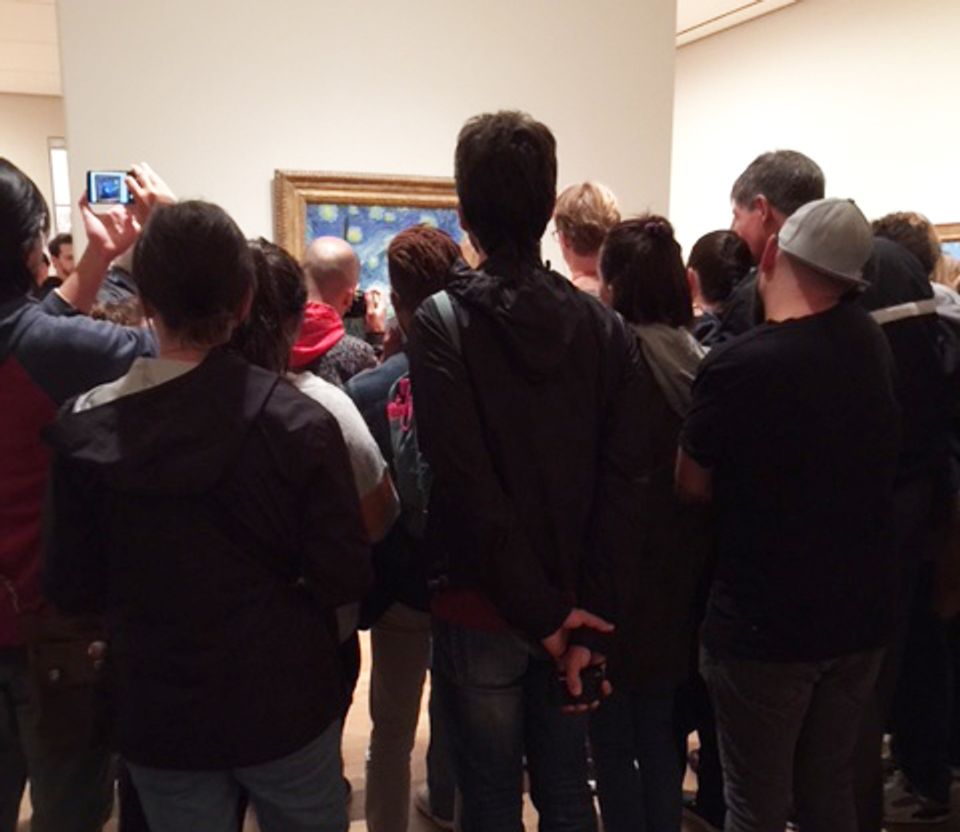 Visitors around The Starry Night at the Museum of Modern Art, New York Alison Cole