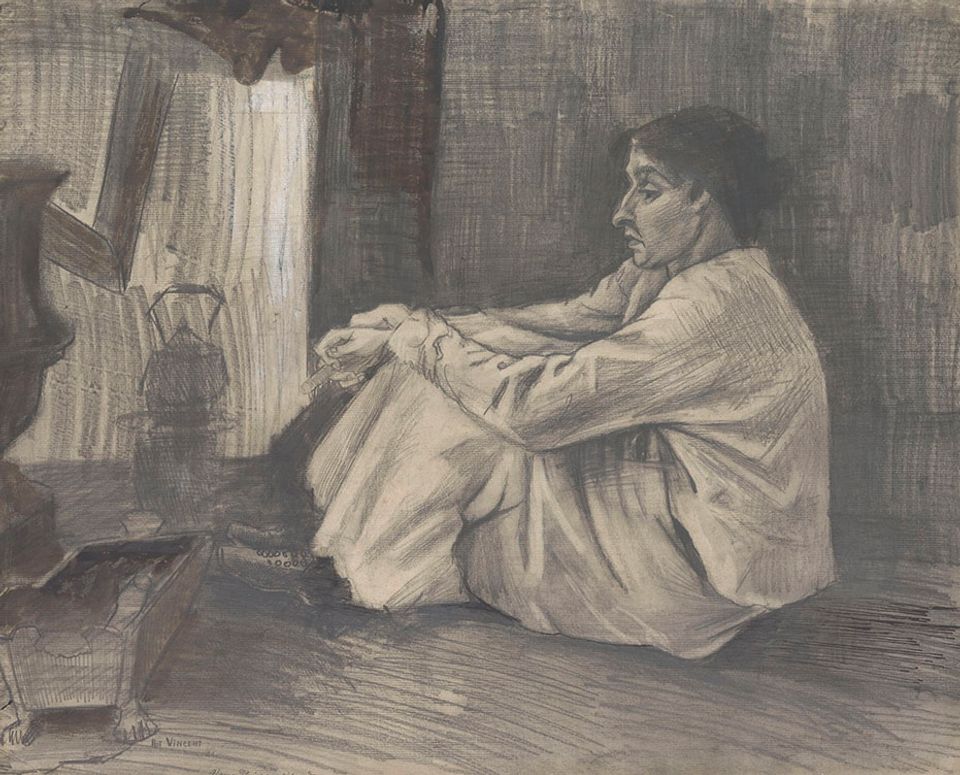 Although Vincent fell in love several times, he only ever lived with one woman. Sien Hoornik, whom he met in The Hague, was working as a prostitute when Van Gogh approached her to model for his drawings. They quickly developed a relationship. Sien and her young daughter moved into his modest apartment, creating a family life for Vincent.

A year or so later Sien confessed to Vincent that she was lazy, explaining that this was why she had become a whore—the term she used to describe herself. She admitted to Vincent: “It’s bound to end up with me jumping in the water.”

Tragically, 21 years later, this sad prediction came to pass. The story is recounted in my latest book, Living with Vincent van Gogh, which is published on 25 April. I tracked down Sien’s 1904 death certificate in the Rotterdam municipal archive and armed with this date it was possible to find newspaper reports on the drowning of a woman identified only by her initials. 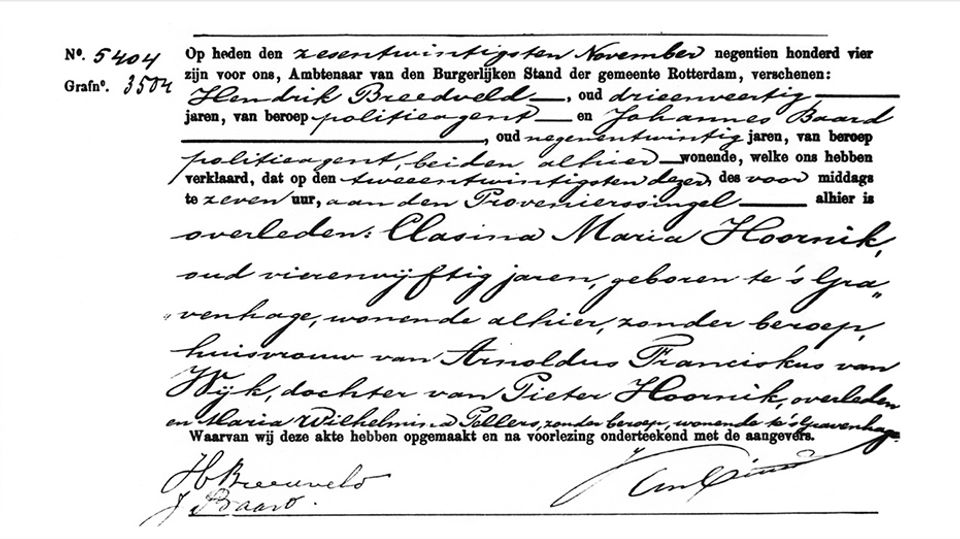 Sien had faced a succession of challenges in life. She had become pregnant by four men, all of whom abandoned her. Two children died in infancy. When she met Vincent she had a 5-year-old daughter, Maria. Sien was pregnant again (from another man) when she moved into his apartment and a few months later gave birth to Willem—named after her latest lover, Vincent Willem van Gogh.

Vincent was initially elated, caring greatly for Sien, Maria and the infant Willem. As he wrote to his brother Theo: “I don’t want her to feel abandoned and alone for a moment longer... I feel a tender love for her and hold her children dear.” Vincent wanted to marry, “otherwise hardship will make her take the same road that ends in the abyss”. But partly because of Theo’s opposition to a relationship with a former prostitute, they never married.

Vincent and Sien were certainly an unlikely couple, but they were lonely souls who had faced difficult lives and supported each other. However, it proved to be a difficult relationship. Vincent was an awkward character, obsessed with the idea of becoming an artist. Sien was a tough woman, saddened by her experiences—and with none of Vincent’s interests in art and literature.

Tensions developed and around 18 months after meeting, they split up. Van Gogh set off for Drenthe, a remote area in the north of the Netherlands, to develop his skills as a landscape artist.

Until now little has been published about Sien’s later life, but soon after Vincent’s departure, she handed over the care of her two young children. Maria was sent to live with Sien’s mother and the infant Willem with Sien’s brother, Pieter. Sien moved from The Hague to Delft, then to Antwerp and eventually to Rotterdam.

In 1901, at the age of 51, Sien married for the first time. Her husband, Arnoldus van Wijk, was 11 years younger. It has sometimes been described as a marriage of convenience, since he formally gave his surname to Willem, then 19.

Very little has been known about Sien’s death. Jan Hulsker, a distinguished Van Gogh scholar, was the first to record in the 1980s that “she drowned herself”, but with an incorrect date, making it difficult to investigate further.

However, I recently found the unpublished death record in the Rotterdam archives which states that Sien died on 22 November 1904. Her body was found in Provenierssingel, a canal and parallel street of the same name just north of Rotterdam’s central station (the area was bombed during war and is now much changed, although an ornamental garden remains). 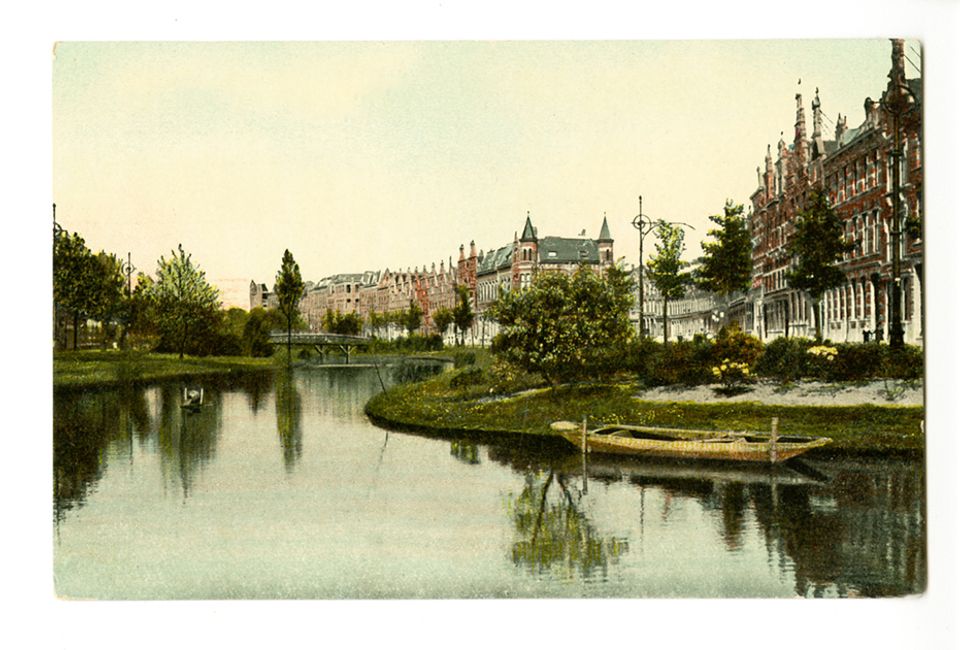 With the date and location, it was possible to track down newspaper reports about the drowning of an unnamed woman. The Rotterdamsch Nieuwsblad ran a front-page article saying that a public gardener had found the body of a woman aged around 45 in the Provenierssingel early in the morning.

She was “very thin” and 1.65m tall, with dark brown hair and eyes. The woman had been dressed in black. On the middle finger of her left hand she wore a silver ring. Her corpse was carried by barge to Crooswijk, in northern Rotterdam, the city’s main cemetery.

Sien must have drowned herself in the canal during a freezing night. Her life had been full of suffering, but we will probably never know what finally led to her to end it in this terrible way.

The Rotterdamsch Nieuwsblad returned to the story a week later. A man identified only as A.F.v.W. had gone to the police station in the evening of 28 November. He was Sien’s husband (Arnoldus Franciscus van Wijk), who had last seen his wife the previous Monday. The police showed him the clothing and the ring, which he recognised as those of his wife. He must have endured a very distressing week after Sien had gone missing, but worse was to come.

The police felt it was necessary for Arnoldus to identify the corpse, although unfortunately it had been buried just a few hours earlier. The corpse was exhumed, and Arnoldus had to view the bloated body of his wife, which had deteriorated considerably during the week. The Rotterdamsch Nieuwsblad identified the woman only as C.M.H. (Clasina Maria Hoornik).

This new evidence suggests that Sien’s relationship with Arnoldus was a proper marriage, not one of convenience, since the newspaper gave their joint address as 30/2 Verlaatstraat, 10 minutes’ walk from Provenierssingel. As Arnoldus had seen his wife a few hours before her death they were presumably living together.

After mourning the loss of his wife, Arnoldus remained in Rotterdam until his death in 1916. Maria Hoornik, the girl whom Van Gogh had sketched in their apartment in The Hague, died in 1940. Her younger brother Willem lived on until 1958; by a strange twist of fate, he became an engineer with the state waterworks. Neither Maria nor Willem ever seem to have talked about the Dutch artist who had once been their mother’s lover.

Although it is probably coincidence, 12 days before Sien’s suicide a major exhibition of Van Gogh’s work had opened at Rotterdam’s Oldenzeel gallery, one kilometre from Verlaatstraat. Van Gogh was then gradually becoming known as an artist. One wonders whether Sien ever learned of the growing fame of the man with whom she had lived—and whose career was cruelly curtailed by his own suicide.

• Living with Vincent van Gogh: The Homes & Landscapes that Shaped the Artist is published on 25 April by White Lion Publishing