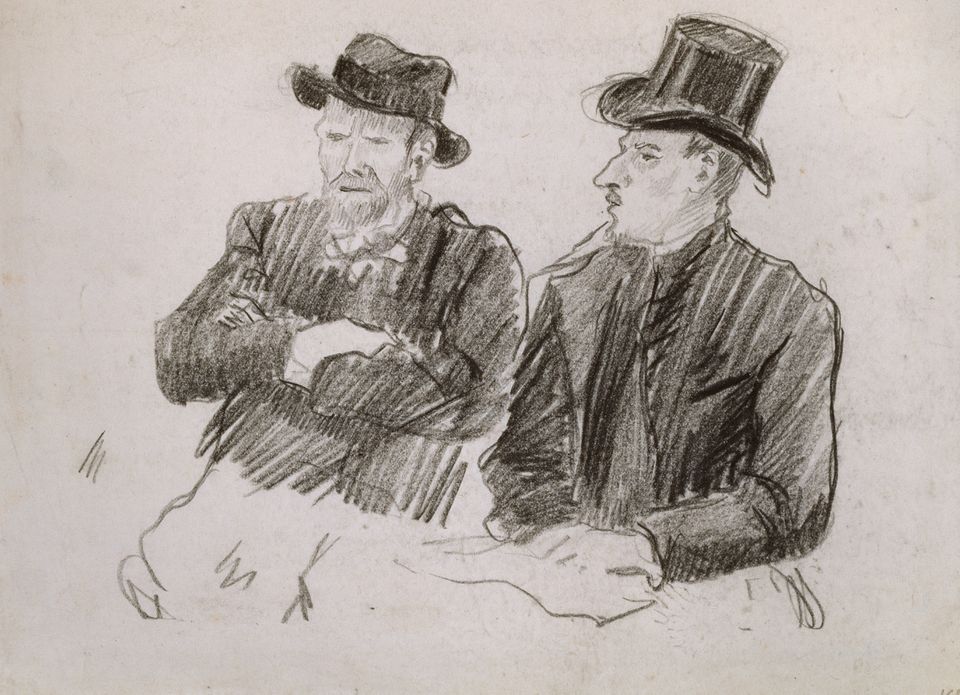 A mysterious drawing by Lucien Pissarro, currently on loan to Tate Britain’s Van Gogh show, represents the only depiction of Vincent and Theo together. Theo, in the top hat, is talking with his brother, who sits with his arms crossed in a rather defensive pose. Lucien, the son of the Impressionist painter Camille, sketched the two men in Paris in 1887.

Lucien, who died in 1944, never displayed the drawing during his lifetime. Six years later it was bequeathed to the Ashmolean Museum in Oxford by his widow Esther. It was first published in 1958. Rarely displayed, it is now on show for the first time for more than a decade.

Although it has always been thought to depict the bearded Vincent (on the left), the other man is more difficult to identify. He was once said to be the Parisian critic Félix Fénéon, but a condolence letter was later found in which he wrote that he “did not have the honour of knowing Vincent personally”. The features of the man in the top hat do not seem to match anyone in Vincent’s circle of artist friends in Paris.

I have long believed that the man in the right is almost certainly Vincent’s brother Theo. An 1888-90 profile drawing of Theo by his friend Joseph Isaäcson depicts him with a similarly prominent nose, although it is more exaggerated and slightly caricatured in Lucien’s sketch. 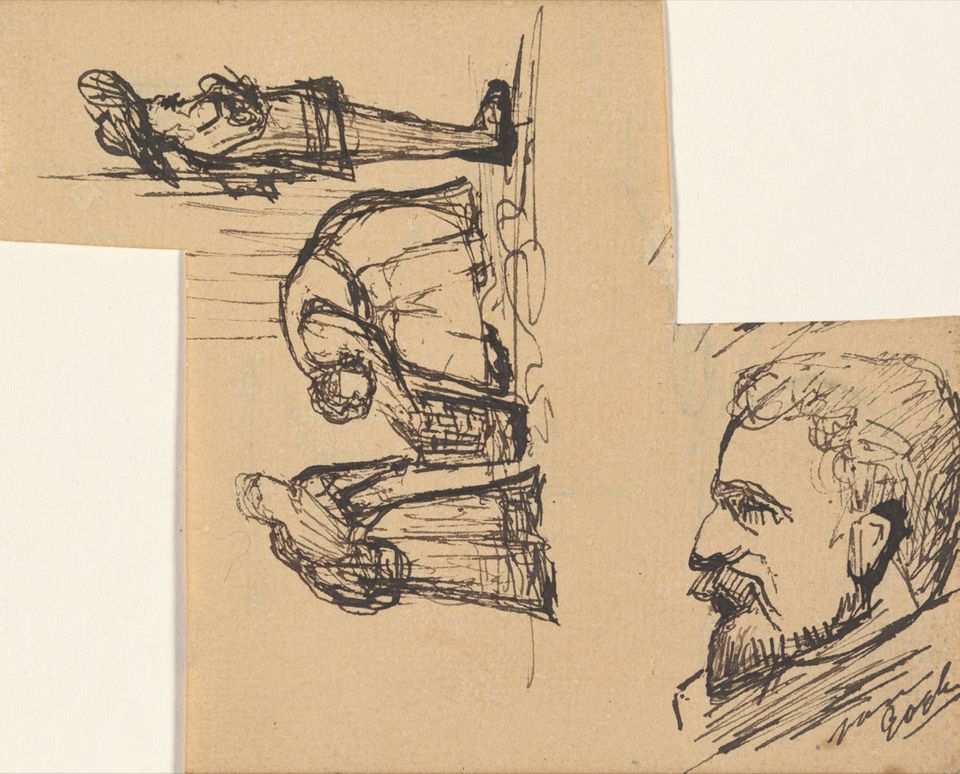 A detail of the Isaäcson portrait has been reproduced before, but what remains of the original sheet is published here for the first time. Seeing the sheet emphasises that the Isaäcson is a very informal portrait sketch. Inscribed “Van Gogh”, it depicts Theo, rather than Vincent. Theo was known in Parisian circles by his surname, whereas Vincent always wanted to be called by his Christian name.

Theo first met Camille Pissarro and his son Lucien (then aged 24) in the late spring of 1887 and Vincent encountered them shortly afterwards. In Lucien’s drawings, the two Van Gogh brothers must be outdoors, since they are wearing hats. They have jackets, not coats, which suggests a summer or early autumn scene, with September as the most likely month. The brothers may have been drawn at a pavement cafe, and a couple of curved lines in front of Theo could represent a small round table, and Theo seems to have something in front of him, perhaps a newspaper. In 1887 Theo was 30, four years younger than Vincent, which seems consistent with the figures in the Lucien Pissarro sketch.

Theo sports a top hat, a sign of respectability and urban fashion. Vincent has a soft hat, similar to those in a number of his Paris self-portraits. A decade earlier Vincent had also worn a top hat, while working for the Goupil gallery in Britain, and he had then written to his parents that “you cannot be in London without one”. But by the time he had moved to Paris he had become a Bohemian artist, and was well known for his scruffy appearance.

Louis van Tilborgh, the Van Gogh Museum’s senior researcher, has written there are “doubts” about the identification of Theo in the drawing, on the grounds that he normally had more of a moustache and beard. However, the three photographs of him as an adult show varying amounts of facial hair. There are no full profile photographs, which makes it difficult to see the shape of his nose.

Colin Harrison, the Ashmolean’s senior curator of Western Art, is now inclined to accept that it is indeed Theo. He says that “although there is no definitive identification of the second man, Theo is the most likely suggestion”. The Lucien Pissarro drawing is in The EY Exhibition: Van Gogh and Britain, Tate Britain (until 11 August).

• Martin Bailey's Living with Vincent van Gogh: The Homes & Landscapes that Shaped the Artist was published on 25 April by White Lion Publishing.