What’s old is new (and vice-versa) 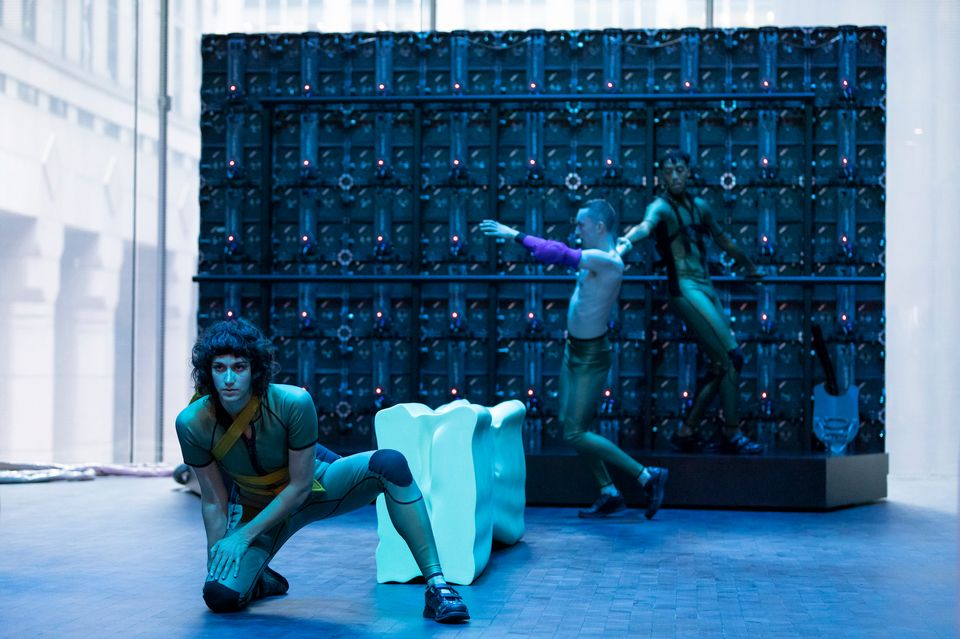 Some of us are pleased, or at least are not surprised, when a gallery bets on mystifying new art. Who doesn’t enjoy making discoveries? Because context is everything, it is a whole other proposition when a museum known best for its historical collections takes the same risks.

That is what the Museum of Modern Art is doing with its new Kravis Studio, a soaring gray cube dedicated to the presentation of media and the live arts. At the opening of the expanded building, the Studio gloriously housed a new variation of Rainforest V, a 1973 sound and sculptural installation by David Tudor that took supreme advantage of the gallery’s advanced acoustics and lighting. People could wander through the “forest” of instruments (made of household junk) suspended from the ceiling or sit on benches; during performances a sliding door closed off access to adjacent rooms, totally immersing audiences in the environment.

No such luck for the Studio’s new, linked exhibitions, Shelf Life by the choreographer Adam Linder, and Force Life by the artist Shahryar Nashat. The Angeleno artists live together but usually do not work together. Not that this is a collaboration, exactly. The two works on view fulfill the Studio’s other purpose: to provide a workshop for younger artists to experiment and introduce new ideas, forms or technologies. (MoMA’s media and performance curator Stuart Comer compares it to Fluxus group activities.)

At the 1 February opening, attended by a hardcore, inner-artworld group of artists, curators, dealers and critics, I did not respond well to Linder’s hour-long dance. Though a potentially transformative take on the tension between artificial intelligence and human intervention, ), I found the piece so deep in old tropes and so invested in the banal that I retreated to the adjacent gallery to watch the more precedent-setting film of Trisha Brown’s Man Walking Down the Side of a Building (1970), from a cushioned seat. During the live performance, there was room for a small number of viewers to sit on the floor along the sides; standing meant catching glimpses through heads.

I don’t mind a little discomfort in art, but this piece tried my patience. The best part of Linder’s performance was the hinge action, when four dancers (out of six who rotate) made the changeover to Nashat’s video wall, accompanied by a disembodied female voice reminiscent of the robot that alerts the crew of a doomed spaceship of its imminent self-destruction.

I tried to think of the dancers as motion-captured, posthuman sculpture. It didn't help. Especially since Nashat had three actual, static sculptures of more visual interest right there, almost as stage props, with which the dancers did not engage. Yet I could plainly see that the Gen-Xers in the room were intently wrapped up in the proceedings. Because of that, and because Linder arrived with encomiums from performances in other institutions, and because this was MoMA, I went back a few days later with the Hammer Museum curator Aram Moshayedi to check my responses against his and the public’s.

Moshayedi and others were moved by the repetitive, robotic movements of the dancers, whom I still found unexceptional. If this weren’t MoMA, I might have expected less. My companion appreciated Linder’s attempt to make dance about something other than a sensate human body. (Why bother?) And dismissed the pleasures of virtuosity when its displacement could reveal other truths. (Hmm.) Another curator judged the piece semi-successful, applauding Linder’s determination to imagine the Baudrillardian future in terms of dance. Point taken. But that is a future that doesn’t interest me. And it’s here, now, anyway.

How effectively can a sanitizing museum of modernism—especially one with so storied a venue for the contemporary as PS1—mine the unsettled, or unsettling, art of this moment, about which most bets are off?

A few days later, Gavin Brown Enterprise provided an answer of sorts with House, an exhibition of sculpture, drawing, painting and video by Uri Aran. Galleries, which sometimes trump museums in terms of scale and speed of presentation, do new art best. Even when it has ancient resonance.

Aran’s first show in New York in seven years fills three floors of this former brewery and includes loaves of aging fresh bread arrayed on library shelves like edible books. The passing of time from yesterday to tomorrow has a physical presence here — no human bodies needed.

On entry, I felt disoriented by the array of seemingly unrelated works. “They look like relics of something, I don’t know what,” the collector Shelley Fox Aarons observed at the opening. Her other half, Phil Aarons, who collects printed matter, helped himself to one of the doctored New York Times editions stacked on a plinth. So did everyone, an impressive number of whom were other artists—Wade Guyton, Jacqueline Humphries, Ryan Sullivan, to name three. Though other enthused collectors, like Marty and Rebecca Eisenberg, were present, the artists seemed to be the ones buying. “Uri’s an artist whose work other artists want to own,” Gavin Brown said.

Aran’s mixed-media paintings are abstractions of their making—beautiful and so densely layered they take time to discern. Sculptural works, typically for this artist, include found tables appointed with so many objects and materials (corn husks recur), they slip around your eyes while you are looking. The big crowd-pleaser was a 20-foot wall spread, barcode-like, with what many took to be ancient copper knives, but actually were cast-bronze tongue depressors. “Easy to carve,” the artist explained.

The more time I spent with his work, the more absorbed I became. This was not my experience at MoMA, but I give the museum credit for throwing its chips in the air for other artists to catch.

41 minutes ago
June auction highlights: from a delicate Degas pastel to a Kandinsky painting once owned by the Guggenheim museum