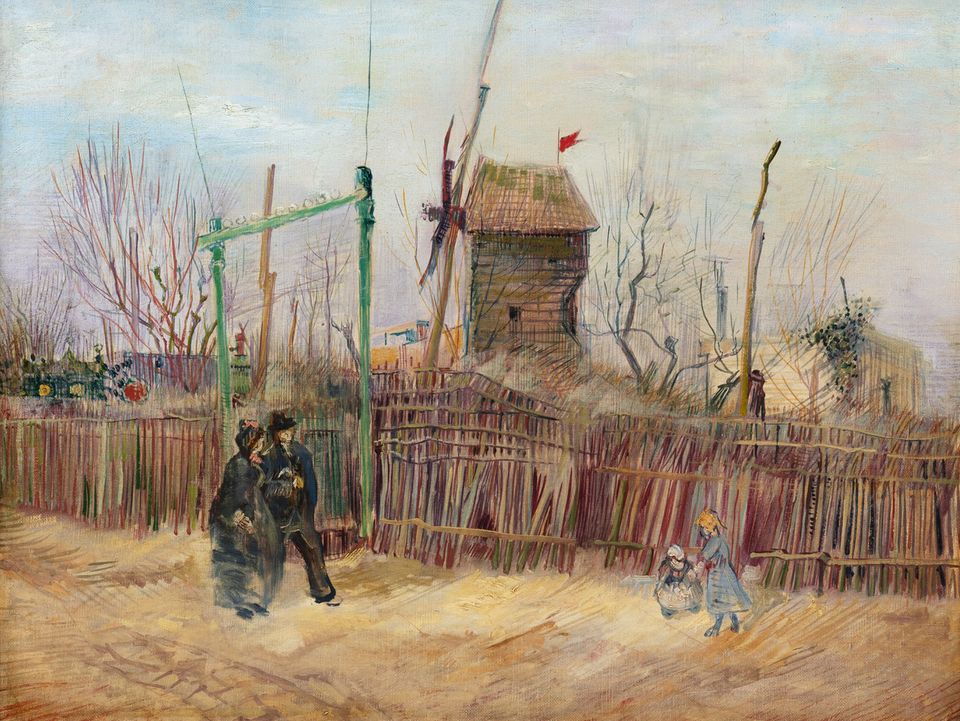 Sotheby’s will be selling a painting which has never been exhibited since it was in Vincent van Gogh’s Paris studio. The landscape has been in the same family since at least 1920. Although a black-and-white photograph was published in 1972, it has only once been reproduced in colour as a very small image.

On 24 February Scène de rue à Montmartre (Montmartre Street Scene) was unveiled at a Covid-19-secure press event in Paris. The owners had originally approached the Paris auctioneer Mirabaud Mercier, which then entered a partnership with Sotheby’s. The Van Gogh will come up for sale on 25 March, estimated at €5m-€8m ($6.1m to $9.8m).

Scène de rue à Montmartre depicts the street outside an entertainment complex at the top of the hill. A couple walk past the entrance, framed by green poles, while two very young children play in the street. The picture dates from spring 1887, when Vincent was living with his brother Theo in Rue Lepic, five minutes’ walk away.

A wider view of almost the same place appears in another Van Gogh landscape now at the Van Gogh Museum, Impasse des Deux Frères (February-April 1887). The mill is the Moulin à Poivre, also known as the Moulin Debray. The small mill on wheels in this painting is probably a movable billboard advertisement for the bar and cabaret. 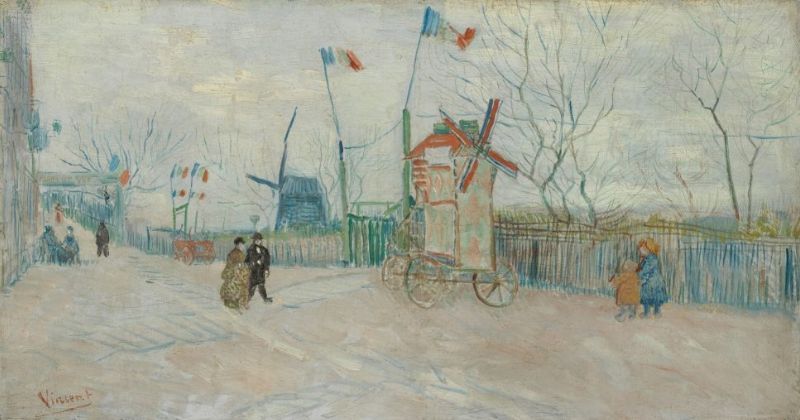 So where has the newly unveiled painting been since 1887? There is no evidence that it was originally given to Theo, who received most of Vincent’s pictures. Vincent couldn’t sell his work, so he may have given or exchanged Scène de rue à Montmartre with one of his artist friends. Alternatively it might have been with Père Julien Tanguy, a paintseller who sold him materials and also stored many of his pictures.

Whatever its early provenance, Scène de rue à Montmartre was acquired by 1920 by the family who are now selling it. For many years the Van Gogh hung in their office. When an image of it was first published in 1972, by the distinguished Dutch art historian Abraham Hammacher, it was said to belong to “a private Danish collection”. But although there is probably a Danish connection, Sotheby’s says that the owning family has always been French.

No details of the family are being released, but they are believed to have done business with Denmark and travelled regularly to Copenhagen. One of the major Danish collectors of modern French art in the early 20th century was Wilhelm Hansen (who later set up the Ordrupgaard Museum), so it is just possible that he owned the painting earlier.

The Van Gogh Museum has not publicly commented on the discovery, but in the case of newly emerged works, the major auction houses seek their acceptance of authenticity. Although this is not recorded in Sotheby’s initial web catalogue entry, Scène de rue à Montmartre is due to travel to Amsterdam next week.

And how much did the Van Gogh cost in 1920? A comparative picture is at the Art Institute of Chicago: Terrace and Observation Deck at the Moulin de Blute-Fin, Montmartre (early 1887). Painted at almost the same time, it depicts the observation deck at one of the windmills on the hill. 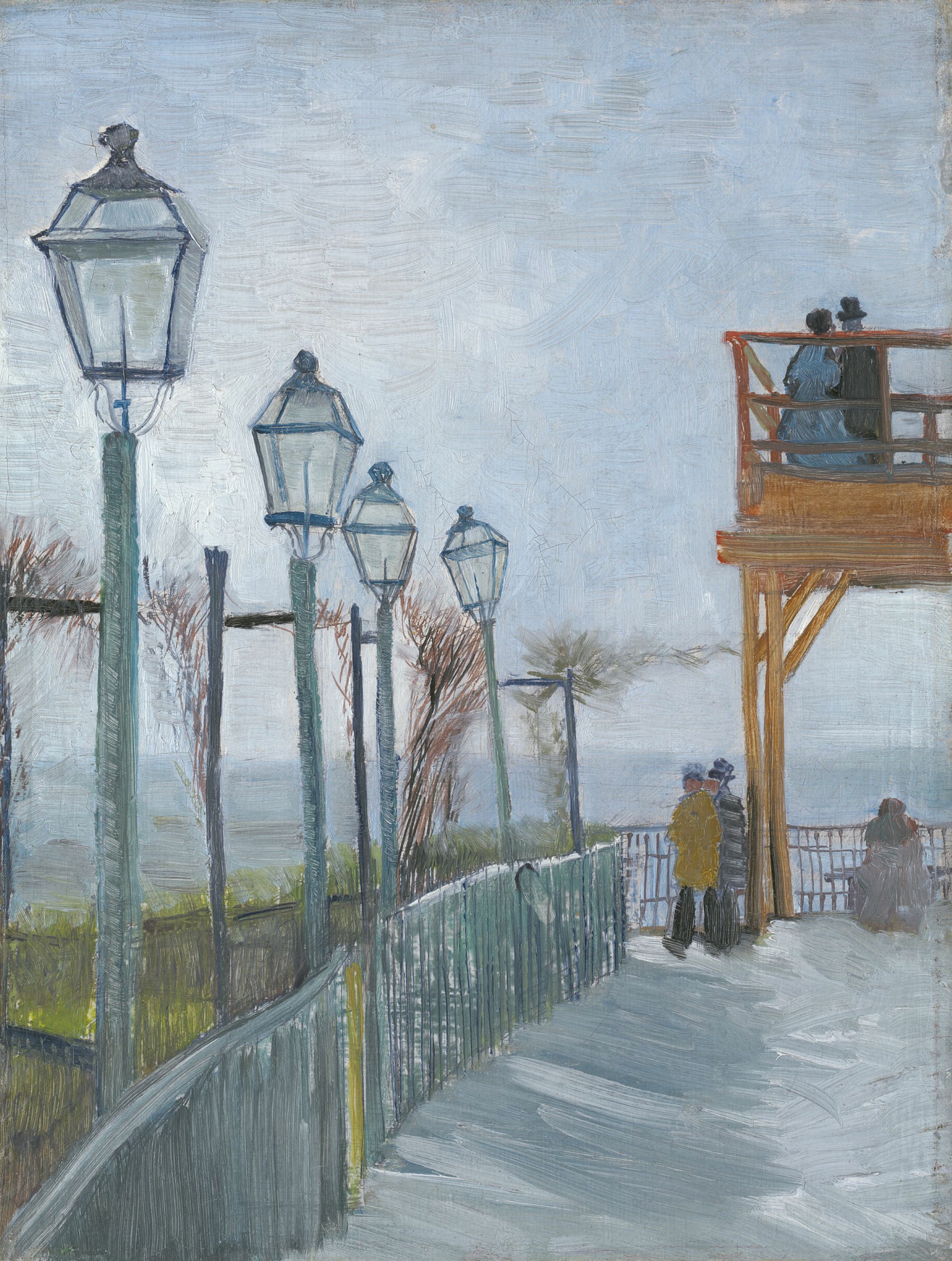 Terrace and Observation Deck at the Moulin de Blute-Fin, Montmartre was sold in 1924 by the London dealer Oliver Brown, who ran the Leicester Galleries. Praised by the artist Augustus John, it was bought by Elizabeth Carstairs, whose husband Charles was a director of the New York-based Knoedler Gallery. Two years later the painting was donated to the Art Institute of Chicago by the widower of Helen Birch Bartlett.

The 1924 price of Terrace and Observation Deck at the Moulin de Blute-Fin, Montmartre was £300. Although almost half the size of the Sotheby’s painting, the sale was a few years later, when prices had risen. The fortunate family who bought Scène de rue à Montmartre may therefore have paid a similar sum.