Banksy’s activism is his greatest work

The Louise Michel has rescued more than 150 people off the coast of Libya Image: @MVLouiseMichel/Twitter

Banksy is at his best when he is not making art, and his latest project—funding a refugee rescue boat named Louise Michel after the 19th-century French anarchist—may be his greatest work yet.

Since setting off a week ago from the Spanish seaport of Burriana, the boat, which is registered in Germany and manned by a crew of activists from across Europe led by Pia Klemp, has rescued more than 150 people off the coast of Libya. The majority of passengers were transferred to a larger rescue vessel over the weekend after European authorities appeared to deliberately ignore Mayday calls from the Louise Michel, which had become too overloaded to steer. The survivors finally arrived in the port of Palermo, Sicily yesterday.

Underscoring the hypocrisy of governments who claim to be progressing the case for racial equality while simultaneously taking a hardline anti-immigration stance, Banksy’s video of the rescue mission, posted on Instagram, concludes with the words: “All Black Lives Matter”. 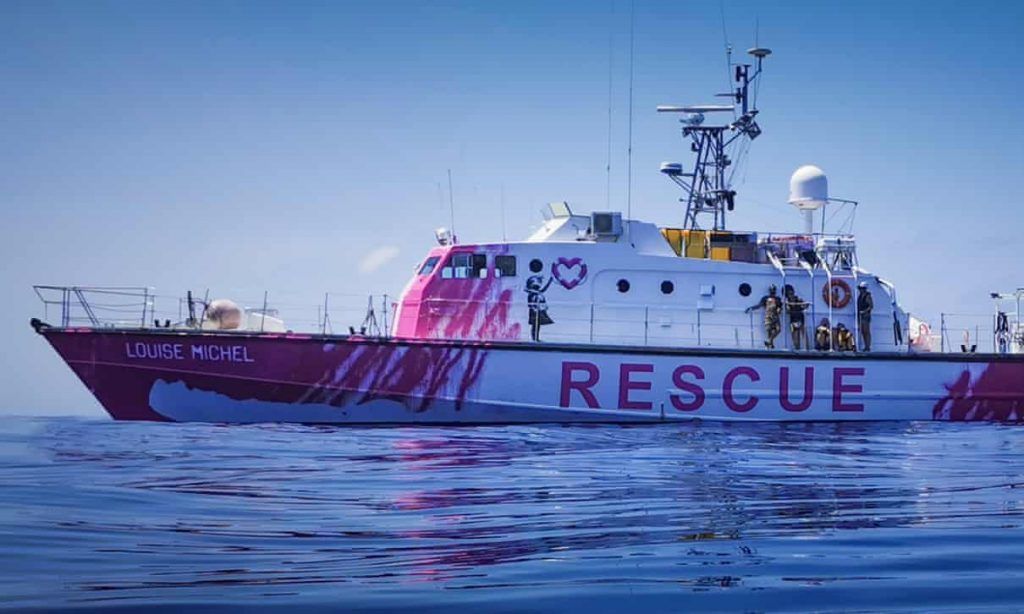 Unlike many in the art world who have recently announced themselves civil rights supporters, Banksy cannot be accused of such tokenism. His involvement in the Louise Michel mission dates back to last autumn, when he opened a pop-up shop in Croydon and announced his intention to purchase a “new migrant rescue boat” using the proceeds from sales. Klemp’s ship, the Iuventa, had been impounded by Italian officials and Banksy offered to replace it.

His history of working to highlight the plight of refugees and displaced peoples stretches back much further. Banksy first visited Bethlehem in 2003, returning numerous times to stencil works on the West Bank barrier, which, he has said, “turns Palestine into the world’s largest open prison”. In 2017, he opened the Walled Off Hotel smack-bang next to the barrier, bringing some much needed life—and tourism—to a rubble-strewn, forgotten stretch of Bethlehem. 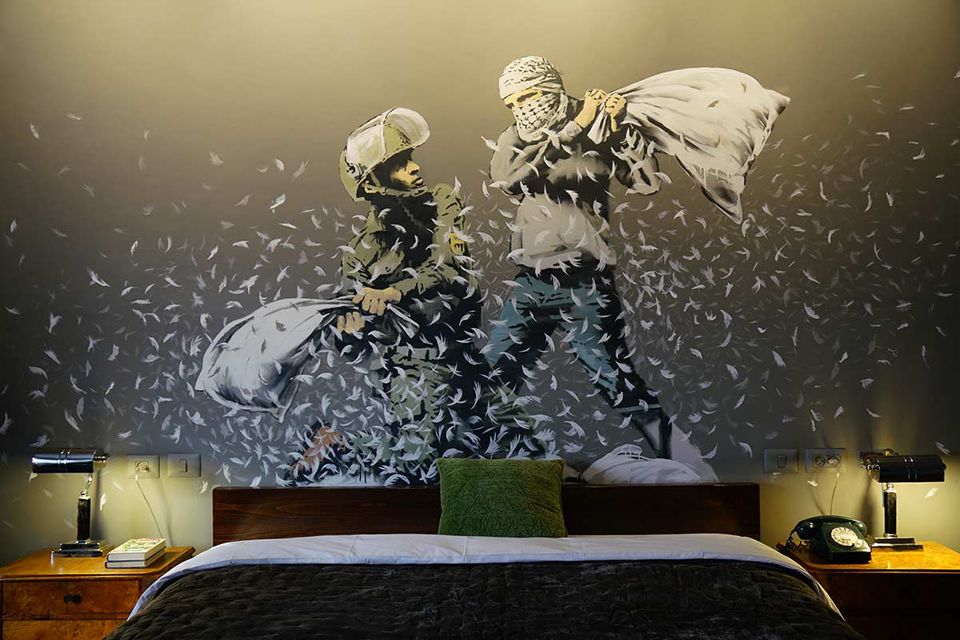 Banksy has also spent time in the refugee camp in Calais known as “the Jungle”, donating wood and other structural elements from his 2015 bemusement park installation Dismaland to help build shelters. As a reminder of the benefits of migration, he left in the camp a painting of the late Steve Jobs, the founder of Apple and son of a Syrian migrant.

The scale and ambition of Banksy’s enterprises have ballooned with his market, which has reached fever pitch in recent years. The artist has been able to retain some degree of control—since setting up Pest Control in 2009 to oversee authentications and primary market sales, his personal wealth is estimated to have grown to between $20m and $50m. 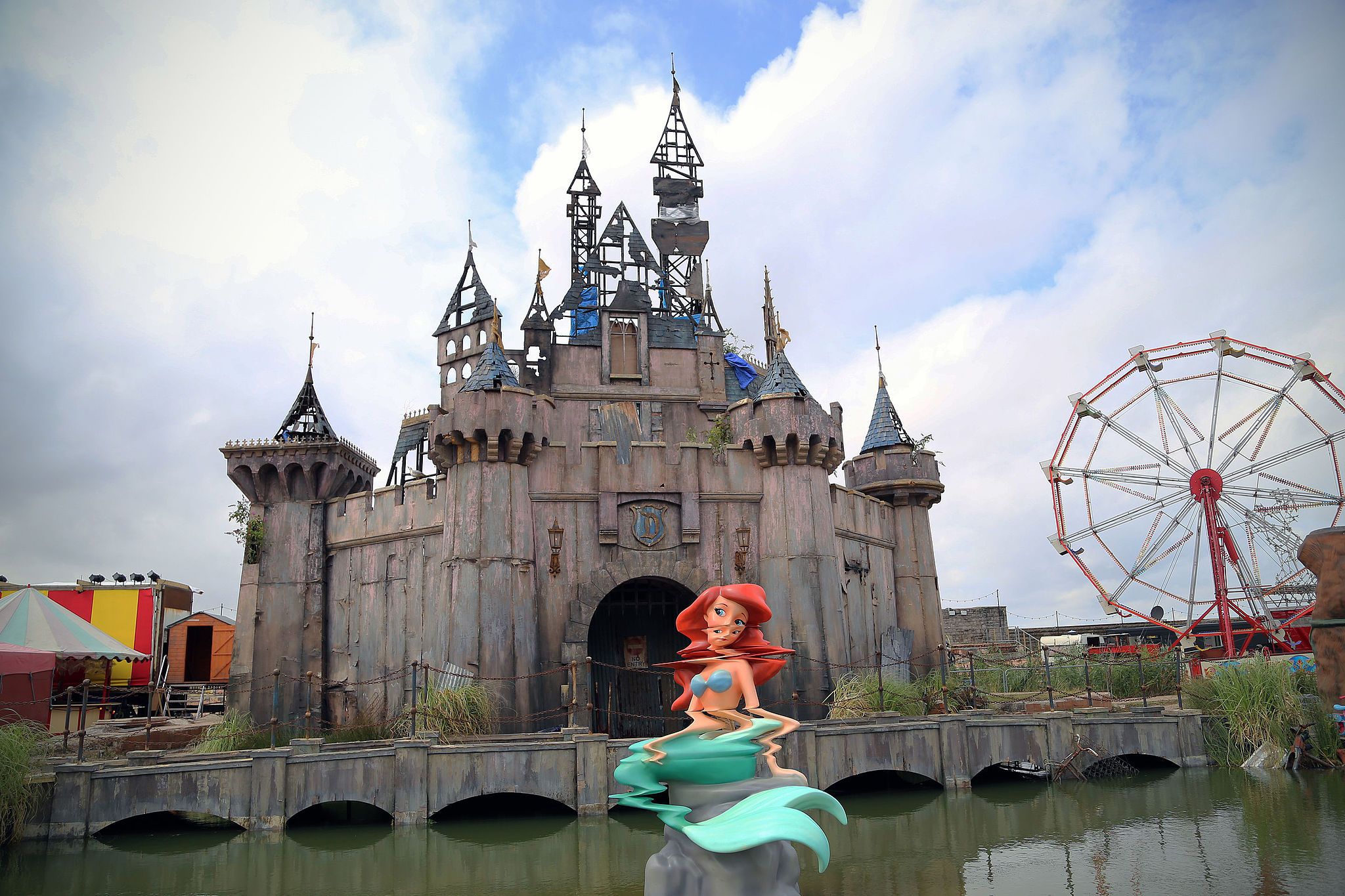 But, as a crusty from Bristol, albeit a canny one, his relationship with the market is complicated. His latest video, some of which was shot on board the Louise Michel, begins with footage of the now infamous auction of his Girl with Balloon painting at Sotheby’s in October 2018, which hammered down for £860,000 before being shredded by a mechanism hidden in the bottom of the frame.

In the film, scenes from the Sotheby’s auction cut away to people screaming as they struggle to stay afloat at sea. The contrast is loathsome. “Like most people who make it in the art world I bought a yacht to cruise the med,” Banksy says. “It’s a French navy vessel we converted into a lifeboat. Because EU authorities deliberately ignore distress calls from ‘non-Europeans’.”

Could the sale of Girl with Balloon have contributed to the purchase of the boat (the consignor is widely thought to have been one of Banksy’s circle, if not the artist himself)? After all, a version of the painting featuring a girl in a life vest holding a pink heart-shaped safety buoy has been spray-painted on the side of the Louise Michel. His publicist, Jo Brooks, declined to comment. 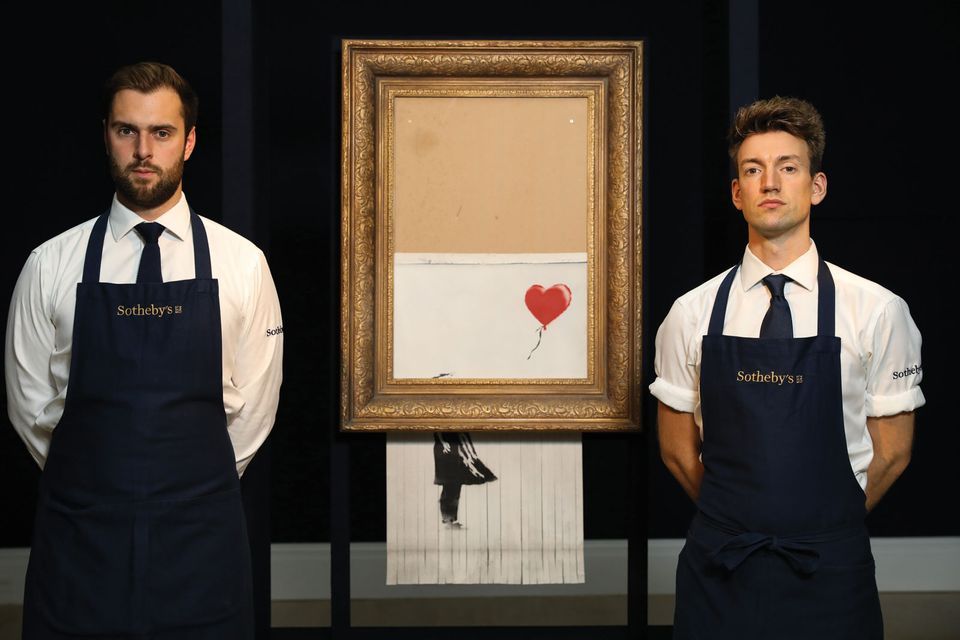 Banksy's Girl with Baloon (2006) shredded itself at a Sotheby's auction Image: Sotheby's

In an email to Klemp last year, Banksy acknowledged that he “obviously can’t keep the money” from the sale of works he has made about the migrant crisis. If only more market players felt such pangs of conscience.

Indeed, the crisis is growing once more. Over the past year, as coronavirus has exacerbated economic hardship and unemployment, migrant arrivals on Italian shores have increased 149%, according to new figures from the Italian interior ministry. The number of unaccompanied minors arriving by boat has risen by 158%.

The uptick has stretched asylum processing facilities on the Italian island of Lampedusa, where many refugees land, prompting protests from the residents. Banksy’s funding of the Louise Michel has likewise divided opinion—detractors suggest the artist take the refugees to Britain where job prospects are better.

Of course, Banksy is not the answer. The refugee crisis needs a joint solution from European governments, who must implement safe and legal routes for people fleeing conflict, persecution or violence. If Banksy can use his profile to draw attention to the emergency, there is a chance governments will listen.

As Banksy himself has said: “There aren’t many situations where a street artist is much use.” As an activist, however, he is proving his worth.

Donations towards the Louise Michel and her missions can be made here.