Freedom of expression was at the forefront of the fight to overthrow Omar al Bashir, now the political cartoonist Khalid Albaih asks the US to keep an eye on its own dictatorial leaders 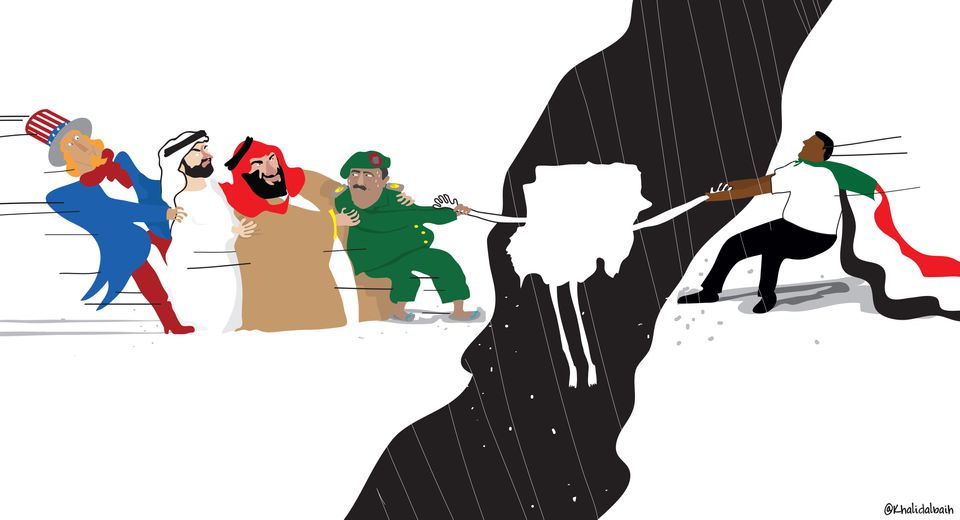 This month, US Secretary of State Mike Pompeo invited General Abdel Fattah al-Burhan, the head of Sudan’s sovereign council to visit the US. Washington, DC and Khartoum have been at odds for the past two decades over Sudan’s inclusion on the state sponsored terrorist list, but relations have improved since Omar al Bashir’s overthrow last April after 30 years of military rule, and the formation of a civilian transitional government. And none of this could have been achieved without the country’s artists and writers.

Throughout our recent history, Sudan has been cursed with military dictatorships, but it has also been gifted—like most of the region — with a young population that uses its creative resistance to win back power, bypassing censorship, sharia law, violence and most notably, the world’s apathy. Three years ago, I was in Sudan participating in an arts festival that took place in Karmakol, an almost deserted village 300km from Khartoum. One of my many unforgettable memories is of a starry night after a long day where most of the festival organisers were gathered on a sand dune as high as the stone wall it leaned against. Everyone was silent and thinking about the same thing: how extraordinary it was to be there, together and for once not worried about getting arrested for things that anywhere else in the world would be considered normal, like playing music or gathering or, if you are a woman, something as ordinary as wearing pants. At that moment, Taha Elroubi, the veteran DJ and owner of one of the first English-speaking radio stations in Sudan, walked into the courtyard and joined our silence for a minute, then pointed at everyone and said: “This is what they are scared of, you gathering.” What Taha said made me appreciate this stolen moment of freedom and gave me a glance of what the future of Sudan could be. The government for the most part has neglected the country’s arts scene, except for during democratic bright spots that never managed to last long before yet another military coup would force artists to disperse. Karmakol was the first point of regrouping for my generation and its exhibitions, concerts, performances, murals, and collaborations were a preview for the explosion of artistic expression that was to follow just a few years later, at the Sudanese army headquarters sit-in that toppled al Bashir in the spring of 2019.

During the protests, while the people of Sudan were coming together and struggling to get the attention of the international news outlets, Sudanese young film-makers Suhaib Gismalbari, Amjad AbuAlala and Marwa Zain were winning international awards and making the world notice by mentioning the resistance in every acceptance speech. The Sudanese American musicians Oddisee, Alsarah and Sinkane gave shout-outs to the demonstrators and their courage at live concerts around the world. The US-based crew of the neurosurgeon turned revolutionary poet Marwa Babiker, the Reggae artist Ayman Mao and the music producer Ehab Saeed uploaded anthems of the revolution. The global music platform COLORS launched a campaign called #BlueforSudan with three popular performances: beginning with the Qatar University IT student Sammany, stating our demands to the world while rocking a traditional outfit and playing his guitar, the up-and-coming Dutch-Sudanese singer Gaidaa offering a soulful tune, and finally the Saudi-based rapper Flippter vowing that we will never forget the martyrs.

Meanwhile, the Saudi based cartoonist Bushara chronicled the protests and, later on, the day-to-day life during the sit-in through his images. YouTuber Muaz Osman made satirical vlogs documenting the protests from his room in Bahri. And Khartoum’s favorite wedding photographer Naji—along with Ala Khair and their colleagues—discreetly provided media outlets with high definition GoPro footage of the protests at time when using a camera was comparable to using a weapon. And the traditional poet Wad Alkabis shot videos from his car that attracted a more populist audience that would otherwise have thought of this revolution as a middle-class affair.

For the first time in my life, there was an explosion of revolutionary slogans spray-painted in the streets of Khartoum. Graffiti artists risked their lives sneaking around the city at night painting the street walls with truths and shaming undercover government agents in their own neighbourhoods. The only female Sudanese graffiti artist at the time, Assil Diab, flew in from Qatar when everyone was flying out of Sudan to create portraits of martyrs who were shot dead by the government forces during the protests.

However, despite the success of our peaceful revolution, despite finally getting the attention of the world for something other than famine, civil war and corruption, the US has done very little to support the new civilian government. Sudan is still on the terrorist list and sanctions continue. Trump recently expanded his travel ban to include Sudan, for reasons that are unclear. The head of the military has been invited to visit the US instead of the much loved prime minster of the transitional government, perhaps to please alliances that do not want to see a democracy in the region. It also ignores the fact that this is the same military that committed war crimes in Darfur and South Sudan for 30 years, the same military that killed protesters even after the fall of al Bashir, the same military that destroyed the murals painted by artists during their sit-in at the army HQ and then disconnected the internet for a month and thought the world would forget.

Art and freedom of expression were at the forefront of our fight to overthrow a dictator. Artists are still doing all they can with what they have to ensure that Sudan’s burst of collective artistic expression helps Sudan reach democracy. This time, we need you to keep an eye not only on our dictators, but also on yours, and to continue supporting Sudan and its artists. This time, the show must go on.

• The writer is an artist and political cartoonist from Sudan. He is on Twitter and Instagram @khalidalbaih