Britain's pillaging of the Benin Bronzes begs for a reasonable resolution

As debate grows over Europe's 19th-century cultural plunder of Africa, the key is to ensure meaningful access 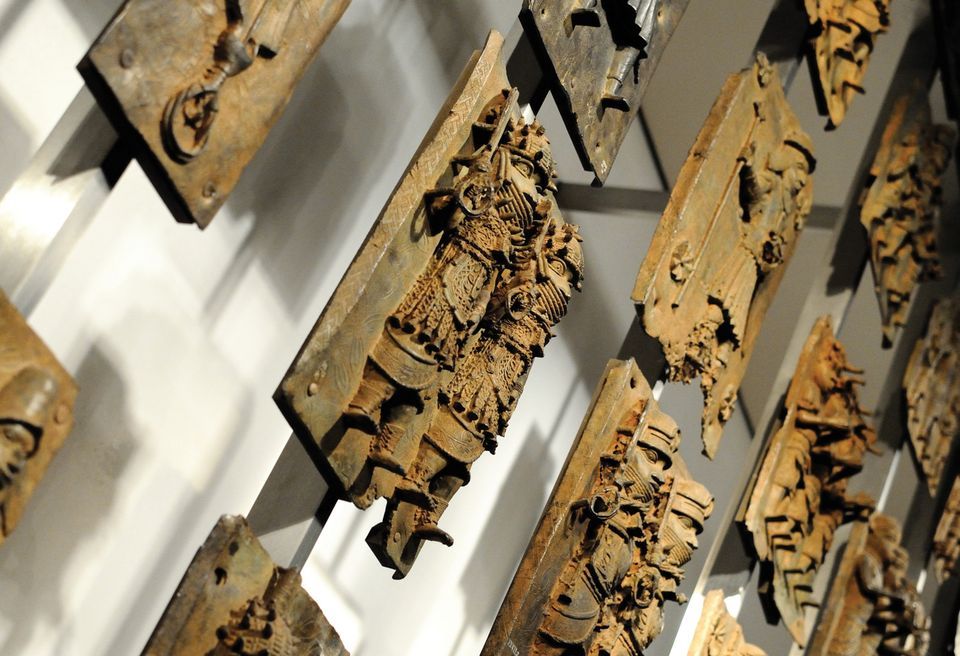 In 1897, British troops marched on Benin City, the capital of the fabled West African kingdom of Benin, ruled over by a powerful Oba. The attack was called a "punitive expedition" because it was a retaliatory response to the Oba having massacred a British delegation of eight officials, two traders and local escorts the previous month. After the British victory, the troops destroyed the town and took away nearly 2,000 plaques and sculptures, known thereafter as the "Benin Bronzes". These pieces were brought back to Britain: many were transferred by the Foreign Office to the British Museum, while a good number were sold to foreign buyers as far away as Germany and America.

This was the typical practice for a punitive expedition at the time: march on the despised local ruler, raze the town to teach him a lesson and take away items of value that could be sold in order to finance the expedition. It was a very economical affair. But was it right to strip the defeated power of all items of value, especially those with cultural or religious significance?

For centuries armed conflict was wrapped up with the pillaging of sacred places and the removal of artefacts of value, such as golden idols, libation bowls, thrones or ancient weaponry. An illustration of the age-old practice can be seen on the Arch of Titus in Rome, which depicts the Roman legions looting the temple of Jerusalem in AD70 and carrying off a large six-pronged menorah.

Things started to change in the early 19th century—more precisely, in 1815. This was the year of Napoleon’s defeat, when the victorious Allies had to face a tough question: what was to be done with all the works of art Napoleon had taken from the princely states during his victorious march across the continent? Should they remain at the Louvre, the museum that had become the deposit-house of the French Empire? The answer was an emphatic no.

The most prominent advocates of the policy of restitution were the heads of the British delegation in Paris at the time: the foreign secretary Castlereagh and the Duke of Wellington. Castlereagh stated categorically that the works taken by the French "contrary to every principle of justice, and to the usages of modern warfare" should be promptly returned; while Wellington personally assisted the King of the Netherlands in reclaiming his royal collection from the Louvre. Not everything was restituted, however. This was because the Louvre’s canny director had spirited a number of pieces off to provincial museums where the Allies couldn’t find them; others were simply too big to carry without causing irreparable damage. On the whole, over half the works taken by the French were recovered, including famous pieces like the Laocoön, which went back to the Vatican, the Medici Venus, which went back to Florence and a collection of ten Cranachs, which went back to Prussia.

The year 1815 represents the beginning of a sea change in the international treatment of cultural objects. Even though the returns were not provided for by treaty or convention, the principle of restitution can be seen from that point forward as a developing custom of international law. International law is a funny thing: legal rules can arise not just out of treaties, but also out of custom, meaning a generalised state practice. Custom is invariably difficult to pin down, for the obvious reason that it can’t be traced to any single legal instrument. But if enough states operate in a certain way (such as in protecting works of art in times of war), then a custom may indeed arise—one that can have legal consequences.

It is generally accepted by legal scholars that a custom that protected cultural objects during war began to develop around 1815. This development continued until it was finally codified at the end of the 19th century in an international convention on the rules of warfare, agreed to by 51 countries at the Hague, Netherlands in 1899. The Hague Convention sets out, in particular, a clear rule that both pillage and the seizure of works of art are prohibited, the latter to be made the subject of legal proceedings (see in particular Articles 47 and 56 of the Hague Convention’s Regulations).

Due to the way customs come into being, these principles were likely in place prior to the Hague Convention, although they lacked enforceability. (Prior to the convention, there was no arbitration body to decide disputes.) A declaration made in 1874 at Brussels by Great Britain, France, Germany and 12 other powers of Europe had proscribed pillage and the confiscation of works of art. A similar principle was echoed by the Institute of International Law in its Oxford Manual of 1880, which would serve as a guide to troops on the ground. While neither were strictly binding, they indicated a custom crystallising with regard to the protection of cultural objects during times of war.

However, the custom was unfortunately not universal: it sadly stopped at Europe’s borders. When it came to colonising the so-called "Dark Continent", all bets were off.

The problem with trying to find a similar custom in the way the European powers dealt with Africa is that there were simply too many instances of looting and seizure still taking place. British troops took artefacts from Maqdala in 1868, from Ashanti in 1874 and, of course, from Benin in 1897, while French troops looted Ségou in 1890 and Abomey in 1892. The sine qua non of a customary rule—a generalised state practice that forsook looting—was simply non-existent when it came to Africa, at least not until the 20th century.

It is a cruel twist of fate that the pillage of Benin City, resulting in what was probably the greatest haul of African art in history, took place two years before the Hague Convention was signed. And it seems patently unfair that a principle that had been applied between European states more or less since 1815 was dead in the water when it came to Africa—or any other colonised territory for that matter.

But this explanation of the state of affairs shows us that, while the looting of African stores was not legally forbidden at the time, the actions were nonetheless of questionable morality, even back then. To use the language of the 1880 Oxford Manual, it still violated the "principles of justice which guide the public conscience".

Despite what some have written more recently, moral question marks were in place early on in the story. Not everyone at the time agreed with the less savoury actions taken on behalf of the Empire. Following the Maqdala expedition by the British Army into Abyssinia, for example, Prime Minister Gladstone stated in Parliament that he ‘"deeply regretted" that the treasures had been taken, expressing sorrow that items so sacred to the Abyssinians "were thought fit to be brought away by the British army". Upon the order of the British government, with support from no less a figure than Queen Victoria, the holiest book that had been taken from Maqdala in 1868, the Kebra Nagast, was returned from the British Museum to Abyssinia four years after the expedition. It seems Victorian morality was not so different from our own.

Whether predicated by rule of law or ethical inclination, the principle against pillaging of cultural objects does not immediately lead to their return. Restitution of cultural property has always been a drawn-out affair. The University of Heidelberg in Germany saw its famous collection of books looted by the Bavarians in 1622 during the Thirty Years War; it would have to wait nearly 200 years to have them returned. In the 20th century, the Treaty of Versailles of 1919 finally allowed France to recover flags, archives and works of art taken by Germany 50 years earlier. More recently, Italy returned a Roman sculpture to Libya and a monumental obelisk to Ethiopia, both taken during Italy’s colonial ventures in Africa, nearly 100 and 70 years earlier respectively. But these things take time.

Nevertheless, once a new legal or ethical plane has been reached, it becomes possible for cultural objects to be returned. Past actions, even if undertaken legally for the time, can have present-day consequences. Of note is French President Emmanuel Macron’s decision last month to return 26 objects looted by French troops in Abomey in 1892, a seemingly analogous case to that of Benin City for the British. While the question remains what the legal basis for this return will be, often in these cases, shifts in morality predate shifts in law.

The unfortunate absence of any rule of international law in this particular instance means that the Benin Bronzes cannot be forced back to Nigeria (the country comprising the Benin Kingdom’s former territory). However, the compelling moral factors described above do beg for a reasonable outcome. Such an outcome would, in my mind, provide that part of that great collection be made available to scholars, researchers, curators and the general public of West Africa for a significant period of time, perhaps on a rotating basis, by way of a long-term loan. This does not mean permanent restitution, which can be left for a later date, provided the temporary return proves secure, fruitful and sustainable.

Offering meaningful access to communities of origin, as is envisioned by the Benin Dialogue Group in its most recent arrangements, does represent a reasonable first step. Having some of the items back in Benin City will hopefully enable a local audience to appreciate once again the artistry that went into creating and casting them. On the other side of the coin, sending the pieces out on a long-term loan can help prove to the British Museum and other Western institutions that even without these pieces in their possession, the walls won’t come tumbling down.