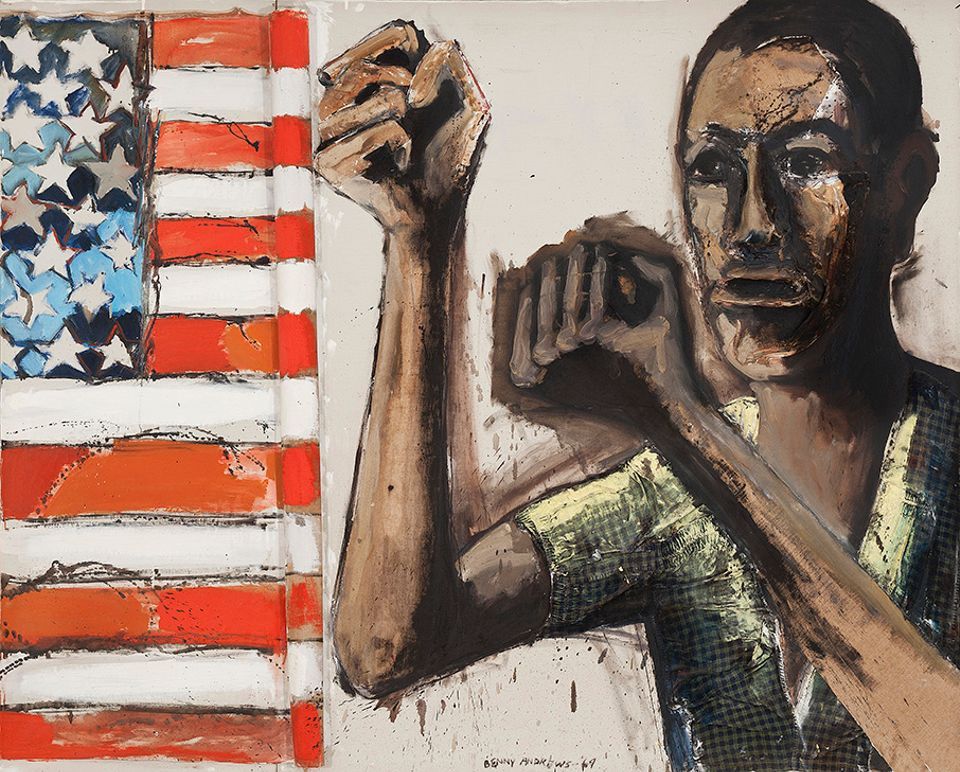 Benny Andrews's Did the Bear Sit Under the Tree? (1969) was on show at the Tate's Soul of a Nation exhibition © Estate of Benny Andrews/DACS, London/VAGA, New York 2017

That fakers are moving into the market for contemporary African American art in increasing numbers should not come as a surprise. Wherever the money flows, the scum follows. And it is clear that the market for work by African American artists is surging. It is not just the headline multimillion figures for Kerry James Marshall, Sam Gilliam and Jack Whitten; while works by Faith Ringgold and Betye Saar fetched less stellar numbers, they have been soaring above their estimates—Saar almost doubled her previous record auction price with a $42,500 sale at Swann last October.

The dealer Thaddaeus Ropac tells The Art Newspaper podcast (released tomorrow) that recognition of African American artists was “the most outstanding and overdue event for me in 2018”. An undoubted catalyst is the acclaimed Soul of a Nation show, which began at Tate Modern in 2017 and is at the Brooklyn Museum until 3 February before travelling to the Broad in Los Angeles later in the year.

But despite Ropac’s confidence in the interest in these artists, one wonders how the thriving market will affect their ability to restore much needed balance to major public collections, particularly outside the US. In European collections, for instance, black American artists are almost completely absent. One of the recent museum mantras is that they have been too focused on Europe and North America and are now looking to different contemporary art communities to reflect a genuinely international representation of 20th- and 21st-century art. But their past collecting of North American art was itself extremely narrow, and dominated by white artists (and, of course, men).

Take the two European collections that can claim to rival New York’s Museum of Modern Art (MoMA) in representing global Modern and contemporary art: the Tate and the Centre Pompidou. Tate Modern and its curators Mark Godfrey and Zoe Whitley are to be commended for conceiving Soul of a Nation, but when you pause to consider Tate’s historical approach to artists of colour from America, it exposes a troubling indifference. Frances Morris, the museum’s director, acknowledged as much in what she told The Art Newspaper as Soul of a Nation opened: “This is a community of American artists we have not recognised in our collection.”

A look at the Tate’s holdings makes for grim reading. No works by Ringgold or Saar, nor by Charles White. Many of the items it does have by black American artists are recent long-term loans: three by Romare Bearden, a Norman Lewis painting, a Melvin Edwards sculpture. The Tate acquired its first Marshall painting last year. It has one David Hammons work, and one Whitten (acquired at the Frieze Art Fair in 2012). It also has a single Gilliam piece, which came into its collection in 1974 as it established a body of work by Washington Color School artists. The Centre Pompidou is even worse: none of the above artists feature in its collection.

So, while we should be pleased that attention has turned to African American artists, we should also lament that the market is surging before major European collections have any significant foothold in the field. Exhibitions help, of course, but it is through collections that artists are thoroughly absorbed into the canon. It will take much creativity and resourcefulness, because many top artists’ prices are propelling them out of increasingly cash-strapped museums’ reach.