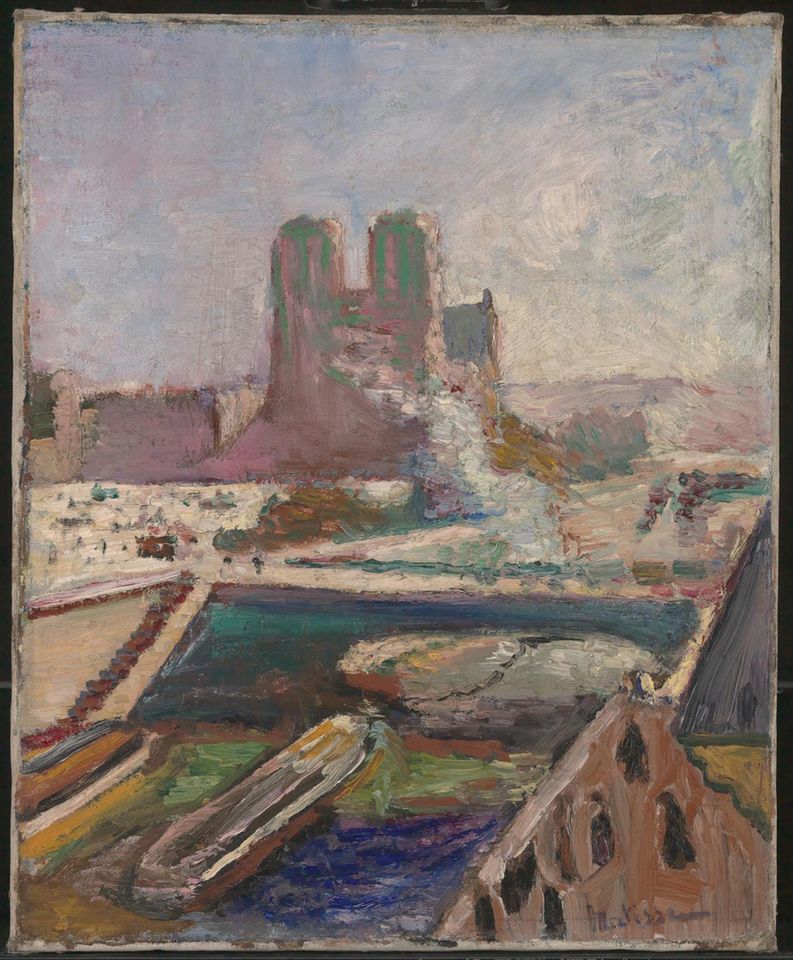 Matisse painted many versions of Notre Dame around 1900 DACS

Right up until that bittersweet moment when the last of the fire’s embers were dampened and the pompiers declared they had saved Notre Dame’s structure, I was deeply distressed. Notre Dame is more than just a facade before which tourists pose for pictures—it has a rich emotional significance for many around the world. So many people shared their experiences of the cathedral—an overwhelming confirmation of the way in which cultural spaces and their contents become an intimate part of the narrative of people’s lives.

Like many who studied art history in the UK, a trip to Paris at 17 was, for me, a cultural awakening. But while I remember being suitably awed by Notre Dame on that trip, it was the Matisses and Picassos in the Centre Pompidou and the Musée Picasso that had me spellbound. When I got back to the UK, I sought their works in our public collections. One was a tiny early Matisse of Notre Dame in the Tate, painted from his studio on the fifth floor of 19 Quai Saint-Michel, looking across a Seine teeming with boats, the cathedral’s vast facade in shadow (below). It is not a major work, and yet I adore it: Matisse’s restless brushwork describing the Seine in ultramarine, ochre and viridian, the bridge’s turquoise undercroft, the pink bell towers in shadow, their details sketched in an improbable green.

I learned so much about art from Matisse’s paintings of Notre Dame: how he absorbed the influence of Cézanne in the more modulated tones and rigorous structure of a 1902 work in the Albright-Knox Gallery in Buffalo, New York; how in 1914 he returned to Quai Saint-Michel and made his greatest Notre Dame picture—stripped back, its towers are little more than Constructivist boxes, the window frame, bridge and quais described only in rough black lines. This latter picture was a landmark in the history of abstraction: a poster of it hung in the studio of the painter Richard Diebenkorn and undoubtedly helped him to capture the light and space of his own environment, the Santa Monica neighbourhood of Ocean Park, prompting some of the greatest abstract paintings of the 20th century.

On later trips to Paris, I walked along Quai Saint-Michel to witness Notre Dame in the morning light that had entranced Matisse and, once inside, basked in that special light from those rose windows. When it seemed on the brink of devastation, it wasn’t just the medieval masterpiece I was preparing to mourn; I feared Matisse’s Notre Dame, so deeply inscribed in my cultural make up, was gaining a newly elegiac significance.

No wonder the fire caused so much anguish: Notre Dame has been endlessly written about, painted and photographed. Beyond its unique material importance, it has found countless ways of entering our hearts and imaginations.