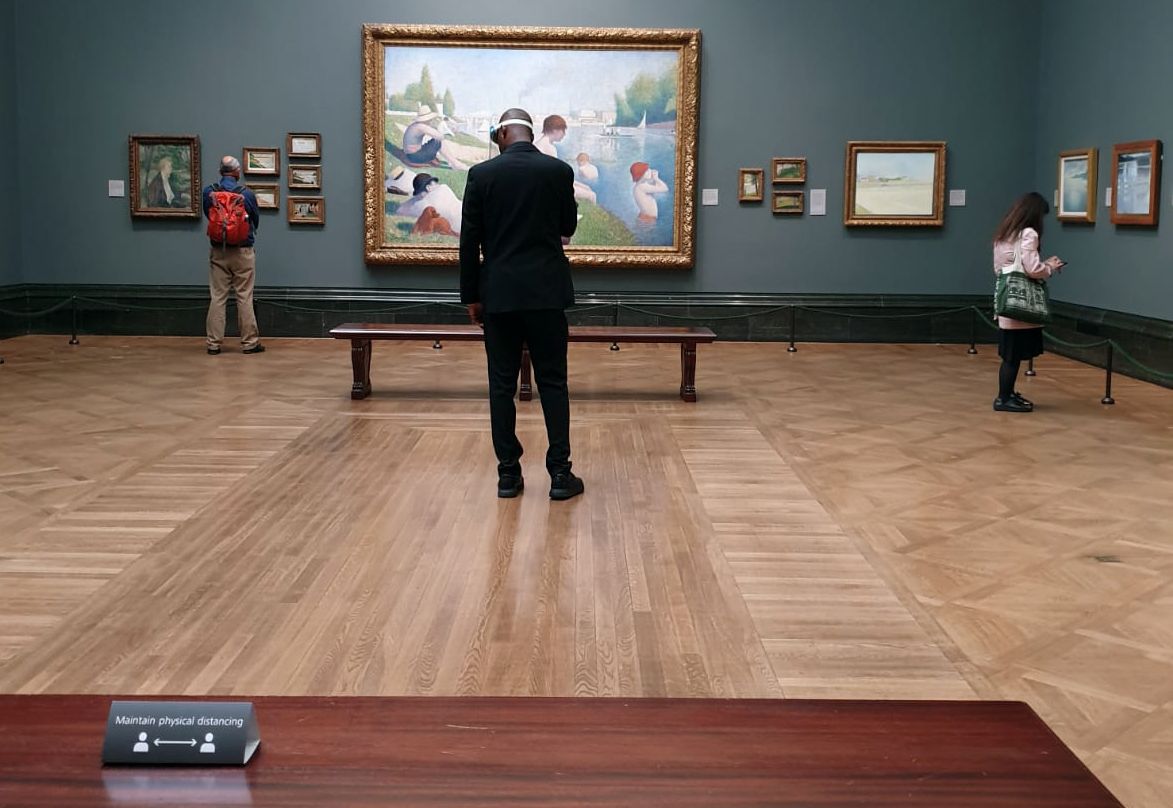 The National Gallery is one of the museums in the UK that has reopened with social distancing measures Photo: Hannah McGivern

Amid much frustration at being exiled from art in recent months, there have been moments of real uplift that have reminded me of the deep personal connections we have to works of art and our wider visual culture. Some of those have come in my conversations with artists, curators and museum directors on The Art Newspaper’s podcast The Week in Art, in which we have discussed “lonely works” behind the doors of museums in lockdown. A few highlights: the critic Laura Cumming speaking about the enduring resonance in her life and memory of Bruegel’s Landscape with the Fall of Icarus (around 1560); the Chisenhale Gallery director Zoé Whitley on the joy she finds in Alma Thomas’s Wind and Crêpe Myrtle Concerto (1973); and Julia Peyton-Jones finding portents of our cataclysmic moment in Leonardo’s extraordinary A Cloudburst of Material Possessions (1506-12).

Meanwhile, the best thing in the generally grim world of Twitter during the pandemic was #MuseumsUnlocked, an initiative by Dan Hicks, a professor of contemporary archaeology at the University of Oxford and a curator at the city’s Pitt Rivers Museum, which came to an end in July, after 100 days. Through #MuseumsUnlocked, my Twitter feed had been punctuated every day by images of, and words about, places and objects, posted in response to daily themes set by Hicks, whether historic civilisations, particular cities or countries, or themes such as animals or food and drink. The results were a people’s curatorial endeavour—community art history and social history as told by visitors from across cultures and geographies; a collision of endlessly stimulating thoughts and pictures.

The #MuseumsUnlocked project has reached the end of its 100 days. We're going to give some thought to where this project goes next, so watch this space, but for now ❤️A MASSIVE THANK YOU❤️ to all who participated - and you can browse the archive here >> https://t.co/v3xh6kzNM2

Among much else, Hicks’s project reflected the profound bonds people have with museum collections; one that is deeper, it seems, than those they have with any blockbuster exhibition. And in the mid- and post-coronavirus era, thoughts on permanent collections have been uppermost in the minds of museum directors and curators. Dan Weiss, the chief executive of the Metropolitan Museum of Art in New York, and Frances Morris, the director of Tate Modern in London, both told The Week in Art in April that there would necessarily be a renewed focus on collections at the expense of exhibitions.

Imbuing their permanent holdings with the same allure that groups of one-off loans have for visitors has long been an elusive goal for museums. With social distancing now mandatory, the onus for museums is not on attracting ever more visitors, though many still want their museums to be both bustling with life and even more inclusive.

Of course, there are severe financial challenges for museums. But this moment also offers a potentially historic opportunity for directors and curators to push the reset button, to diversify the stories they tell and the staff that tell them. They should grasp this as a chance to experiment, to develop radical programmes that make the most of people’s thirst for meaningful engagement with culture and the institutions that are its keepers, to heighten the existing bonds between audiences and their collections and, more importantly, create fresh ties with new communities. Should an equivalent to #MuseumsUnlocked be instigated in ten years’ time, one would hope it would be similarly inspired, but also even more thrillingly diverse.