A home of one's own: tackling London's growing housing and studio crisis

From central London, it takes two Tube journeys, a 30-minute train ride and then a mile’s walk past construction sites and over half-finished roundabouts to reach Radley House, one of five Brutalist tower blocks in south-east London that have recently become a provisional solution to the city’s artist housing and studio crisis.

Inside, the decor is gloomily institutional and the smell of bubblegum-scented floor cleaner grows stronger on the 11th floor, where the artist Joseph Griffiths has lived for the past six months. He is one of nearly 40 artists housed in vacant flats through a scheme run by the educational arts charity Bow Arts in partnership with the Peabody housing association, which is overseeing a £1.5bn regeneration of the vast 50-year-old Thamesmead estate.

Griffiths’s flat is spacious and light. It includes two bedrooms, a separate living room and kitchen, as well as a balcony big enough to grow tomatoes on. Rent is £700 a month (£850 with bills), around 60% below market value, according to Marcel Baettig, the chief executive of Bow Arts. Around one-fifth (£150) is processed as a voluntary donation towards the charity’s work in the area, which has been blighted by depopulation and anti-social behaviour. Radley House, a Brutalist tower block in south-east London, is providing housing for almost 40 artists through an initiative run by the Peabody housing association and the educational arts charity Bow Arts

The Lakeside Centre was a major factor in persuading Griffiths to move to Thamesmead, which once famously served as the dystopian backdrop to Stanley Kubrick’s 1971 film A Clockwork Orange. A former clubhouse overlooking Southmere Lake is being converted by Bow Arts into a cultural centre with 40 artists’ studios. Rents start at £130 a month, around 40% cheaper than the market rate. The £2m revamp has been partially funded by the Greater London Authority.

The centre is due to open in March 2019 and is at the heart of a vision to transform Thamesmead into a cultural hub. Current offerings are limited to a single artist-run gallery TACO!, which opened in July, and a monthly cultural forum hosted by Peabody. The arrival next autumn of the high-speed Elizabeth Line railway will be a further boost.

Bow Arts has a 30-year lease on the Lakeside Centre, but the living accommodation is more precarious. Radley House and its neighbouring blocks are slated for demolition in six years’ time, so rental agreements are on a monthly rolling basis. “It is a guardianship scheme, so we are expected to move around to some degree, but I hardly think about it,” says Griffiths, who previously lived in Poplar, east London, for four years under a similar initiative with Bow Arts.

Griffiths says he would prefer “a certain level of security”, but he points out that the private rental market in central London is not much more secure. For now, having physical and mental space has enabled him to develop his practice and focus on applying for funding for projects, while holding down a day job for 25 hours a week.

“You are always on the back foot, having to work to pay the rent on top of your practice,” he says. “I feel I’ve lost ten years. Artists from wealthy backgrounds are able to not only put all of their time into their careers, which means they get the shows sooner, but they also seem to be prioritised for the paid residencies and free studios.”

Baettig believes “transitional schemes” such as that run by Bow Arts, which “help artists during the first ten years of their career”, are key to building sustainable careers in the arts. However, the charity has an agreement with Peabody to “look at how we could develop long-term accommodation for artists, whether that’s shared ownership or self-builds”, he says. 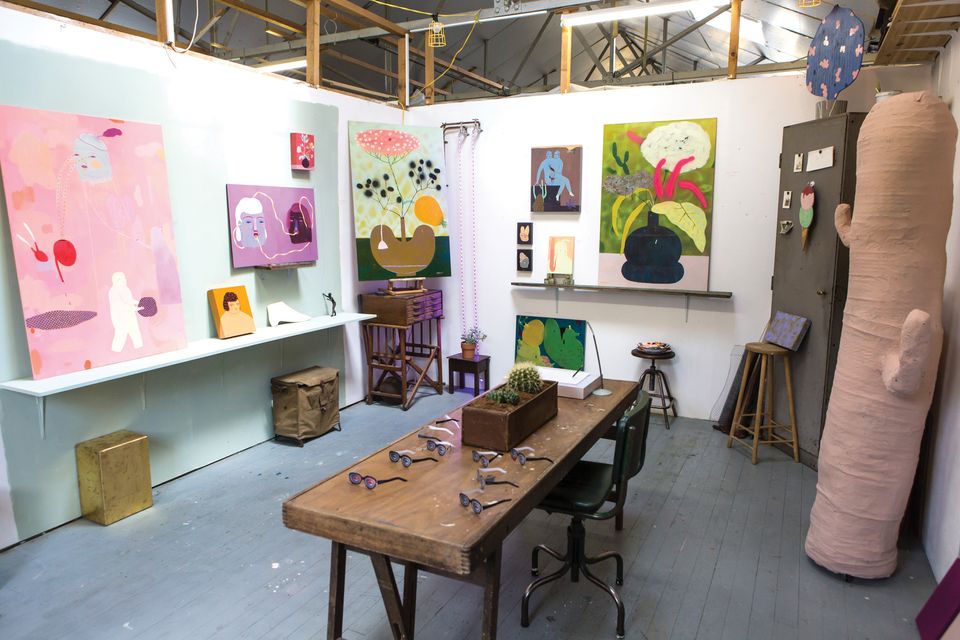 Just north of the river in Barking town centre, the non-profit organisation Create London is pioneering a more permanent model with the borough of Barking and Dagenham, which is due to launch in 2020. Backed by the Turner Prize-winning artist Grayson Perry, the £3.5m development comprises 12 flats for artists, writers or musicians and their families, shared studios and a community hall on the ground floor. Rent will be at 65% of local market rates, ranging from £740 to £975 for one-, two- and three-bedroom flats.

In exchange for long-term—potentially lifetime—tenancies, artists are being asked to spend half a day a week managing the public programme of the community hall. “Artists have lived precariously in places like Hackney Wick and other parts of east London for the past 15 to 20 years. This is a dream project for integrating artists into neighbourhoods and contributing to them as they change,” says Hadrian Garrard, the director of Create London.

“The building is called A House for Artists, and it will always be for artists,” he says. There will be no right to buy the properties, but as long as artists meet the criteria and “don’t go off and buy a nice flat in Whitstable [on the Kent coast] or become a banker in the City”, they will be eligible to stay permanently. The non-profit organisation Create London is establishing A House for Artists in Barking, backed by the artist Grayson Perry Rendering: Apparata

While Baettig applauds Create London’s efforts, he is not convinced by the business model. “It means artists will be working for well below the London Living Wage. It creates a poverty trap because it means you can’t ever afford to move out of that situation,” he says.

Garrard counters that “active tenancies” are common across Europe. “In places such as Amsterdam, many blocks have two or three maintenance days a month,” he says. What is more, he says, Barking and Dagenham stands out among London boroughs in planning for sustainable growth. “They are taking lessons from Hackney and Tower Hamlets, where there has been rapid growth that hasn’t necessarily brought the community along with it.”

Artists are often blamed for catalysing gentrification. The story goes that they move to areas with cheap housing and studio space, then artisanal coffee shops and property developers soon follow. Baettig dismisses this as a “myth”. He says that “artists are far too small a sector to have any impact”. By mixing the gentrification debate with the question of artists’ studios, “we move away from the huge positive impact artists have on our communities”.

Garrard sees “a side-effect to artists occupying space that developers really like”, however. “Ultimately, it makes an area more expensive. Although that might not be the intention of artist communities, there’s a degree of accidental complicity,” he says.

Both agree that there needs to be a more nuanced understanding of gentrification and its relationship to regeneration and economic growth. “There’s nothing wrong with a part of London wanting to grow its economy and create more jobs, particularly when there are high levels of unemployment,” Garrard says.

Indeed, at a time when Brexit threatens to further derail London’s cultural community, with Lisbon, Berlin and Amsterdam among the European cities offering artists competitive rates and a better quality of life, the more crucial these new housing and studio projects seem. There are few others on offer; Space and Acme have provided affordable studios since 1968 and 1972 respectively.

There are modest signs that the tide is turning. According to a report published last month by the mayor of London, Sadiq Khan, at least 39 artist workspaces closed in the capital between 2014 and 2017, but 52 new sites were created. The risk remains high, however, as 24% of current sites providing artists’ workspace face closure in the next five years.

For Griffiths, too, scepticism is at last giving way to optimism. “Finally, the work I am making is resembling the images that I have in my head,” he says. “It’s a very exciting moment for me, which has been a long time coming.”