“Is it possible to have too much Rembrandt? Can you have too much love, wisdom, fine weather? No, you can’t.” So says the art historian Simon Schama. Rembrandt possessed the rare skill of making “faces and figures materially present”, Schama observes, “the looser and rougher the paint handling, the more palpable the flesh; the redness of eyelid rims, the puffball of white hair indicated by the freest brushstrokes”. The best, he thinks, are “constructed around the play of conflicted emotion”, and who can resist this rendering of the human condition?

While the chances of too much fine weather in Holland in March are admittedly slim—and love and wisdom we leave to you—there is an embarrassment of Rembrandt. Across the country, the 350th anniversary of the death of Rembrandt van Rijn (1606-69) is being marked with a lively mix of shows and events throughout 2019 focused on the life and work of the 17th-century Dutch master and his contemporaries.

The perfect opportunity, then, for visitors to Tefaf Maastricht to escape the fair for their own Golden Age day trip, taking in a range of Old Master exhibitions up and down the Netherlands. No stone goes unturned, with shows dedicated to the artist’s burgeoning early career and his ill-fated relationship with his wife, Saskia van Uylenburgh.

There are other notable names in the mix, though. Head north from Maastricht to Delft (159km as the crow flies) for the first retrospective to be held in Holland of the Dutch Golden Age painter Pieter de Hooch. Perhaps combine it with a trip to The Hague and find out why Nicolaes Maes matters (the overlooked artist was one of Rembrandt’s most gifted students). Finally, for a contemporary twist, visit Haarlem to see how today’s artists are turning to the incisive and influential Golden Age figure Frans Hals. 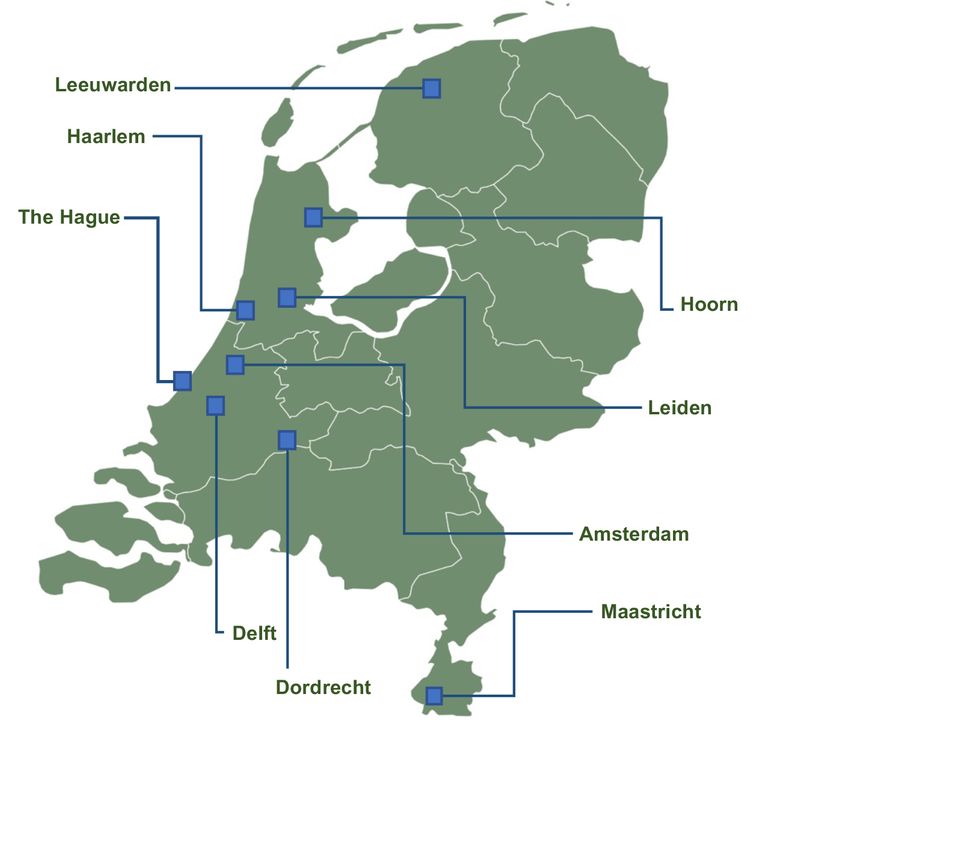 This, surprisingly, is the 17th-century painter Pieter de Hooch’s first retrospective in the Netherlands, with more than 30 of his works depicting the courtyards and interiors of his home town. Key loans by the artist—who arguably had talent to rival Vermeer—include Woman and a Maid with a Pail (around 1660) from the Hermitage Museum in St Petersburg. 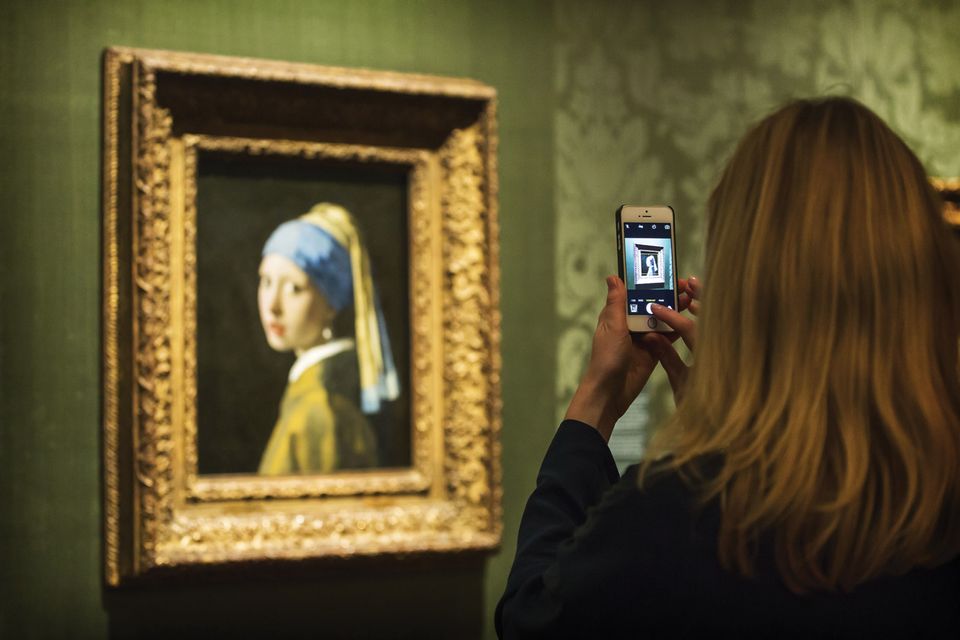 Selfie with Vermeer's Girl with a Pearl Earring

Fries Museum, Rembrandt and Saskia: Love in the Dutch Golden Age, Until 17 March

Rembrandt was 28 when he married Saskia van Uylenburgh in 1634; she died less than eight years later. The story of their fledgling romance and their burgeoning relationship is told here through marriage portraits, intimate sketches and personal objects. A monumental image of Van Uylenburgh, painted by Rembrandt in 1642, concludes the show.

The curators from the Museum de Lakenhal and the exhibition co-organisers at the Ashmolean Museum in Oxford focus exclusively on Rembrandt’s early adulthood—from age 18 to 28—when he was perfecting his technique and training his eye. A 1628 self-portrait on loan from the Rijksmuseum in Amsterdam shows the coy artist in pensive mode.

Each of the 18 Rembrandt paintings on show in this exhibition are accompanied by lengthy texts and stories revealing how the works were discovered and entered the collection. How the pieces were received and viewed over the centuries is also explored. Visitors can ponder the gruesome anatomical details presented by the artist’s Anatomy Lesson of Dr Nicolaes Tulp (1632).

The Mauritshuis shines a light on one of Rembrandt’s most talented pupils, the Dordrecht-born artist Nicolaes Maes. The exhibition traces the arc of his career, from his early biblical representations to the later domestic scenes, which often featured women engaged in household chores. Works on display include The Old Lacemaker (around 1655).

The Dutch Golden Age was not just a time of prosperity and progress. Over the course of the 17th century, the economy, arts and sciences flourished in The Hague, which was the national centre of power and politics at the time, but there was also a darker side. “What was the situation with regard to poverty, child mortality, trade in products from the colonies, and slavery?” ask the organisers. On show are paintings depicting the underbelly of life by, among others, Jan Havicksz Steen. Dordrechts Museum, Work, Pray and Admire: a New View on Art and Calvinism, Until 26 May

What was the nature of the relationship between Calvinism and art, ask the curators of this weighty survey, which features works by the Dordrecht-born Ferdinand Bol, including his Portrait of Wigbold Slicher and Elisabeth Spiegel as Paris and Venus (1656), and the Utrecht Mannerist painter Joachim Wtewael’s Portrait of Eva Wtewael (1628).

Using the Dutch Golden Age painter Frans Hals as a benchmark, the exhibition explores the “formal, cultural and political possibilities of portraiture” in contemporary art. The show includes works by the American artist Nicole Eisenman and the British painter Tom Humphreys. “Hals’s paintings convey a painting technique that was rougher and freer than that of his contemporaries,” the organisers say. 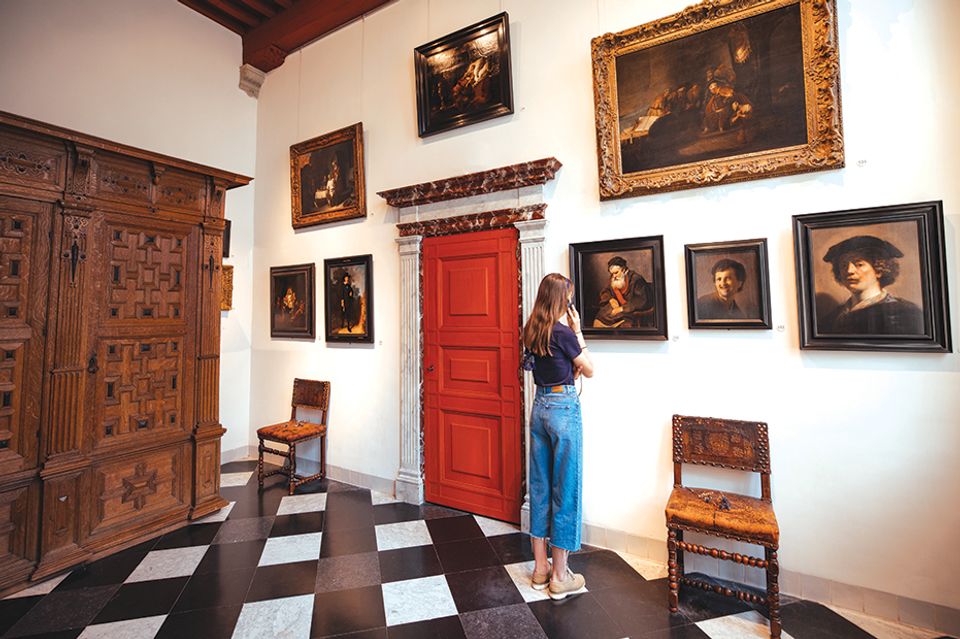 Rembrandt’s social network—his web of friends and colleagues, comprising influential figures such as the painter Jan Lievens and the Amsterdam dealer Jan Six—comes under the spotlight in this examination of the artist’s relationships, and how they shaped his life and work.

Rijksmuseum, All the Rembrandts, Until 10 June

The blockbuster: for the very first time the Rijksmuseum presents its entire collection of works by the Dutch Old Master. The largest holding in the world of Rembrandt’s works encompasses 22 paintings, including The Night Watch (1642), 60 drawings such as Recumbent Lion (around 1660), and more than 300 prints.

A clash of the Old Master titans this autumn pits the 17th-century Dutch artist against the Spanish court painter in a blockbuster pairing. Works by other trailblazers, such as Vermeer and Bartolomé Esteban Murillo, will also be hung alongside.

The Dutch earn their living from water, have fought wars over it, but also need to protect themselves against it. Holland is a land of water, with broad rivers, 18,000 kilometres of dikes, and around a third of the country below sea level. Featured are artists who depicted water, including Jacob Maris of the Hague School and the 19th-century painter Hendrik Mesdag.

Louvre Abu Dhabi, Rembrandt, Vermeer and the Dutch Golden Age, Until 18 May

Jet off to Abu Dhabi to see two works by Vermeer—Young Woman Seated at a Virginal (around 1670–72) from the Leiden collection and The Lacemaker (around 1669–70) from the Louvre in Paris—hung alongside each other for the first time. The 95 works in the show are mostly from the privately owned Leiden collection, with a few from the Musée du Louvre, the Louvre Abu Dhabi, the Bibliothèque Nationale de France, and the Rijksmuseum.