As waters rise, artists answer a call to action 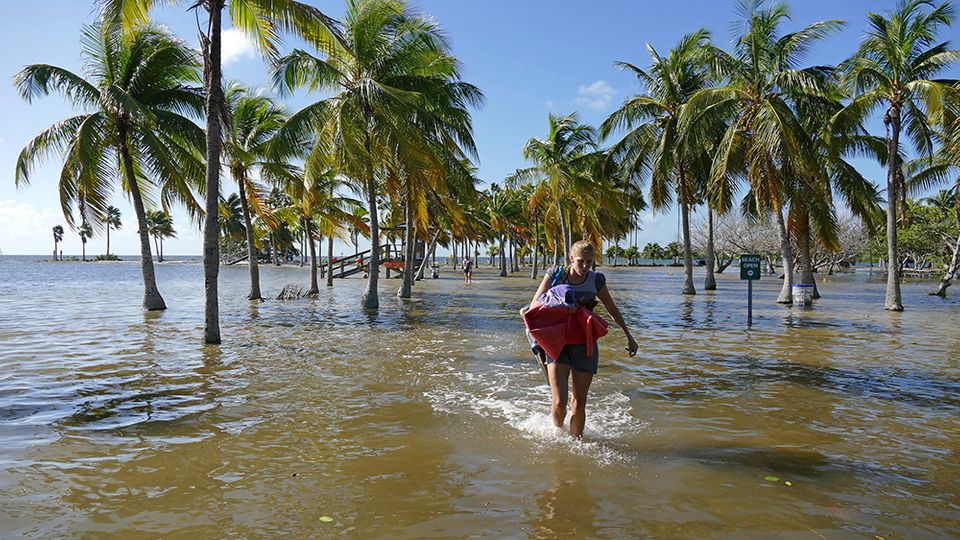 As galleries were setting up their Art Basel booths this week, and millions of dollars of art was being shipped into the Miami Beach Convention Center, Miami experienced an all-too-familiar event: a king tide. These occur when the Earth, sun and moon are in particular proximity, causing high tides to flood the city’s streets.

The king tides are the most visible evidence that climate change and rising sea levels are not a future nightmare but a present reality in Miami. (The increasing prevalence and ferocity of weather events like Hurricane Irma, the catastrophic storm that hit Florida in September, is another.) At the Pérez Art Museum Miami, a neon sculpture by the artist Andrea Bowers installed on the façade proclaims: “Climate Change is Real”. The work, which is for sale for $125,000, has been produced in collaboration with the ecologically focused Leonardo DiCaprio Foundation, which will split the proceeds with the artist. And Art Basel in Miami includes a discussion on Friday titled “Natural Disasters: Whose Crisis Is It?”, reflecting on the extent to which artists can contribute to the discourse around climate change and other environmental problems.

Miami communities, especially those living on the coast, could give a straightforward answer to the question posed by Friday’s discussion: it is our crisis. And while Florida’s governor, Rick Scott, is in denial about the scientific evidence for manmade climate change—as are the head of the US Environmental Protection Agency, Scott Pruitt, and, of course, that regular visitor to the “Sunshine State”, President Donald Trump—art institutions across Florida are addressing the situation head on. 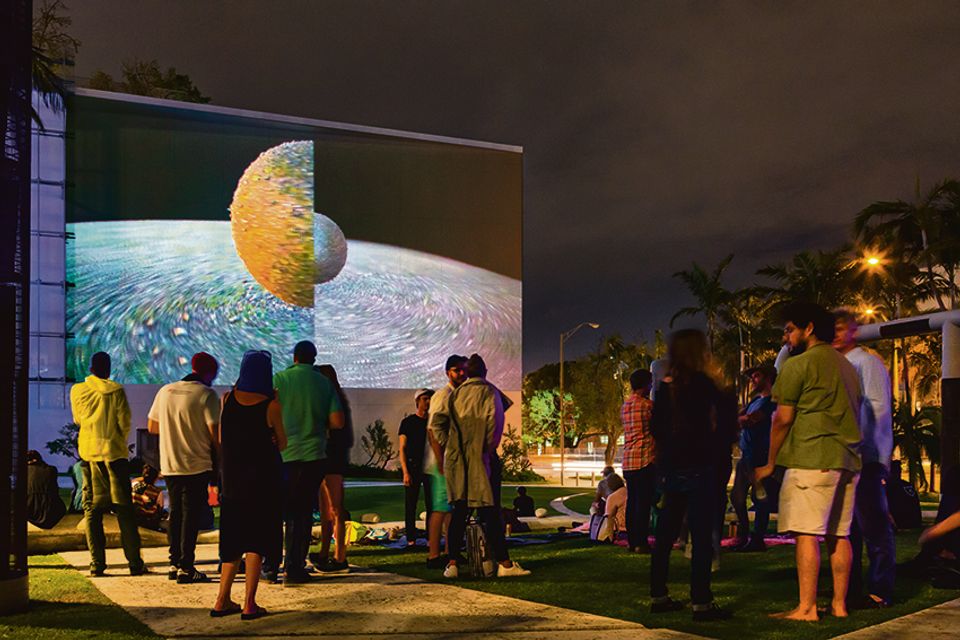 “Our city is literally ground zero in the US for climate change,” says Dennis Scholl, the president and chief executive of ArtCenter/South Florida. The centre has launched the Art in Public Life residency, supported by the John S. and James L. Knight Foundation, which will embed an artist in the administration of the City of Miami Beach.

“We think it’s important to have artists at the table when these issues are being discussed,” Scholl says. “Artists are some of the most creative people in our society, and you don’t normally see them when you’re having discussions about water rising, or installing pumps in a community to make sure it stays dry.”

What will artists bring to the debate? “The ability to speak up for more novel solutions, and ideas about how to communicate the issues in a different way,” Scholl says. “If you really want people to [respond to] a call to action, you have to find a way to motivate them to care about this.” And it is a pressing problem. “All you have to do during a king tide and a full moon is to go to these areas that are struggling. You understand very quickly when you’re ankle deep in water that this is a problem of a magnitude that we really haven’t experienced before.”

The resident artist, who will be chosen following an open call, will receive a stipend of $25,000, free housing and $7,500 in production costs. Together with the ArtCenter’s ArtSail residency, in which an artist responds to the ecological issues relating to South Florida’s sub-tropical coral reef, Art in Public Life reveals a forward-thinking, but also unusually pragmatic, response to environmental concerns.

On the panel for the Art Basel talk is Lars Jan, the Los Angeles-based artist who is unveiling his commission for the watchmakers Audemars Piguet in Miami this week. Slow-Moving Luminaries is a pavilion on two decks, with the lower deck described as a “maze of scrim and flora”. Above, “building models that mimic the surrounding skyline [will] emerge and recede in concert” from a pool of water.

A performer in Holoscenes (2015) by Lars Jan Lars Jan

Jan has described the piece as a response to Miami Beach’s proximity to the ocean. The potential of water has preoccupied him ever since he had a vision in 2010 of a person reading a newspaper in a room deluged in water, acting as if it were completely normal. He began researching catastrophic flooding events, including Hurricane Katrina and floods in Pakistan in 2010, caught in a stunning photograph by Daniel Berehulak. “I found it incredibly beautiful and horrific at the same time,” Jan says, adding that the “beauty and mystery” of that image “invited me to ask some questions”.

His research prompted the work Holoscenes, shown in Miami in 2015, and in numerous cities across the world. It evokes that original vision by placing performers in a tank of water, where they carry out everyday tasks—sleeping, applying make-up, cleaning—only for the water to rise and submerge them.

The piece was also inspired by his interest in the Anthropocene, meaning our current geological epoch, shaped by human activity. The term was popularised by the Nobel prize-winning atmospheric chemist Paul J. Crutzen, whose work, as Jan puts it, shows how “climate change is great at circumnavigating our ability to address it appropriately, for a lot of different reasons. Our capacity to adapt, which makes humans unique—I guess you could call it one of our strong suits—is also a double-edged sword, because it can lead to a hubris and myopia.”

Holoscenes symbolised this dilemma. “That’s the thing about letting the vision lead, rather than the idea of [making] a climate change project, because there’s so much data, it’s such a complex topic. One of the work’s strengths is that the metaphor, visually, is very simple.” This, he adds, “allowed people who were invested in issues raised by the project to gather their communities and further their own conversations”. 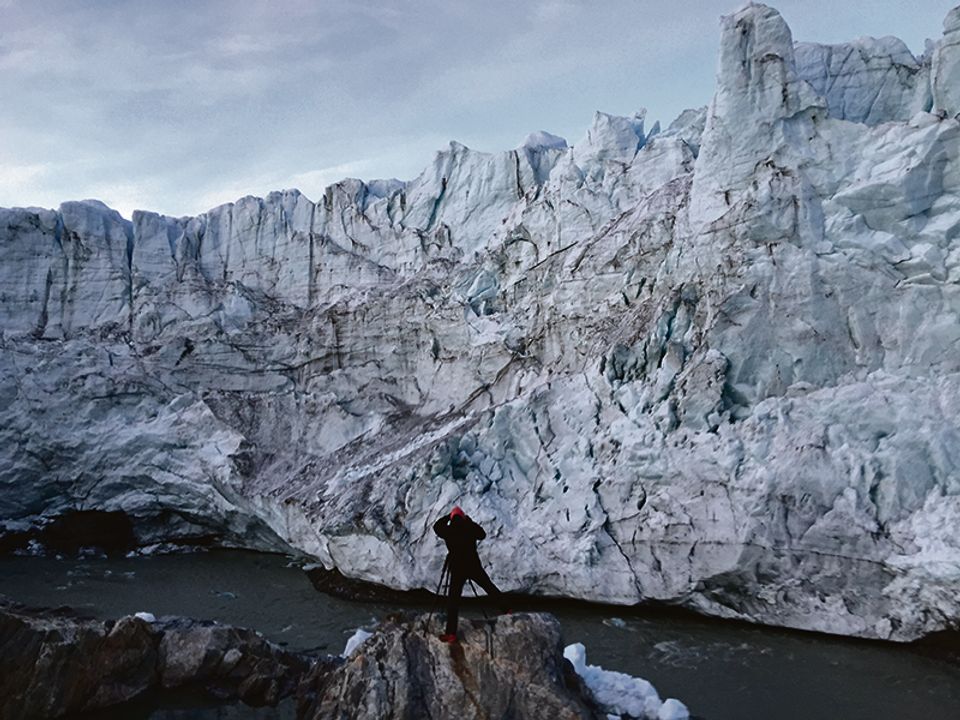 The artist’s unique power to address the major issues of our time was behind the Brooklyn-based Justin Brice Guariglia’s decision to move from photojournalism to making art. His exhibition Earth Works: Mapping the Anthropocene (until 7 January 2018), at the Norton Museum of Art in Palm Beach, features 22 works, many informed by a series of trips to Greenland with Nasa scientists working on Operation IceBridge—a mission to study the impact of melting glaciers on sea levels.

His concern for the environment was born out of the “very visceral” experience of pollution in China amid the “great Asian acceleration”, as Guariglia calls it. After this, it was a natural progression to move beyond his documentary work. Photography, he says, “has been eviscerated by social media and it has lost a lot of the power and oomph it used to have”. He criticises photographic artists who respond to climate change with spectacular images of the environment. The issue “cannot be addressed by heroic, pretty pictures of icebergs”, he says. “It’s the absolute wrong conversation in this day and age.”

So what is the right conversation? “Responding to climate change is the moral imperative of our time, and as artists we have the ability to shape public opinion,” Guariglia says. “The only way to do that is to come at [the audience] in a very subversive, visceral way, in an impactful, emotive way, that gets them to really feel something. You’ve got to reinstil that feeling that gets them to either feel complicit or annoyed, something that can take root.”

This is why Guariglia’s images of glaciers are mounted on that most polluting of synthetic materials—polystyrene. “It breeds this sense of complicity when you realise what it is you’re looking at: that this thing on the wall has already outlived the glacier that is on the surface of this material. The biggest work in the Norton show [Jakobshavn I, 2015-16]—that piece of ice is in Miami. It’s water molecules—it’s all gone—it melted two years ago, a couple of months after I photographed it.”

Guariglia will participate in a climate change symposium at the Norton in January, along with the academic Timothy Morton, who has written extensively on ecological theory; Josh Willis, a Nasa scientist; and Tiffany Troxler, the director of the Sea Level Solutions Center at Florida International University.

Back in Miami, Amanda Sanfilippo, a curator in Miami-Dade County’s department of cultural affairs, is behind Sea Level Rise, a series of temporary commissions funded by the Knight Foundation in partnership with the University of Miami. The programme has featured five artists working in very different media. One of them is Domingo Castillo, whose film Tropical Malaise: Prologue, a wry comment on the absurd commercial property speculation happening in a sinking Miami, used architectural visualisation technologies to imagine a post-human world, 500 million years from now. Appropriately, it was shown next to Frank Gehry’s hi-tech New World Center in Miami Beach, also developed using those technologies. 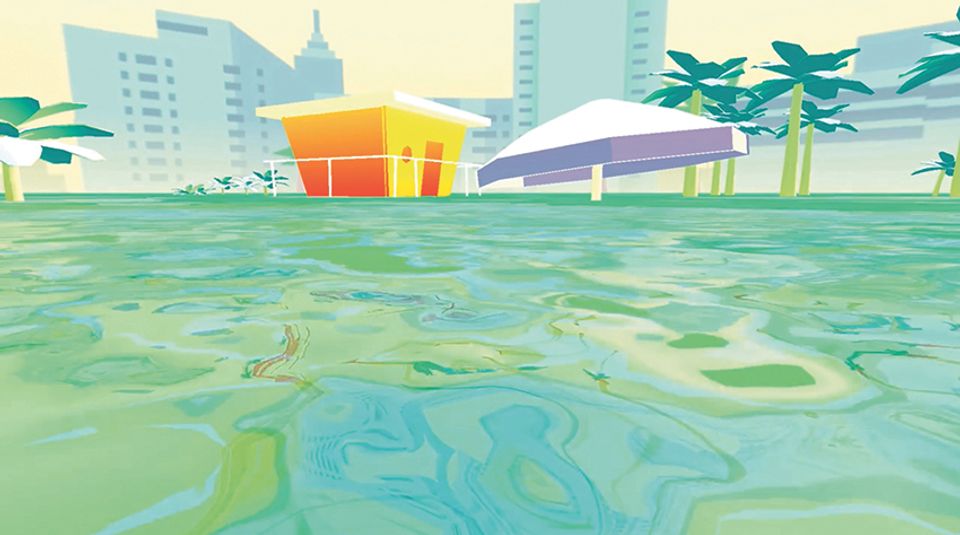 Hannes Bend’s SEAing Breath, meanwhile, is a virtual reality work. With children and families in mind, the German artist created a video game-like, underwater environment. “When you start to breath in or breath out more quickly, it impacts your environment, so the sea levels change based on your biomorphics,” Sanfilippo explains.

Despite climate change being literally at the doorsteps of those living in Miami Beach, Sanfilippo feels that much remains to be done in reaching out to local communities. Her priority, she says, is putting work in high-profile places “and trying to get it out of the echo chambers as much as possible”.

One of the most dramatic examples of this approach is Misael Soto’s Flood Relief, which used the gas-powered pumps that normally disperse flood waters to create what Sanfilippo calls “an amazing spectacle”. Water from Biscayne Bay was sucked in and spat back out at a site next to the Pérez Art Museum Miami. “[The pumps] are so ubiquitous in and around the city and the county,” Sanfilippo says, “so when they’re positioned so that they’re creating a spectacle, it really does create that moment of pause. We’re all now used to dealing with the reality of what it means to have major flooding all the time, and really this isn’t a coincidence.”

Sure enough, those pumps were back doing their usual job on Monday, as the king tide hit Miami again.