What happens when a rapper, a painter and an art fair director get together in a swanky hotel to make digital art?

Inside the stately Grand Hôtel du Cap-Ferrat—set in an affluent town on the French Riviera boasting billionaire yachts, palatial villas and thriving gardens—is a conference room housing six paintings of flowers unfurling against pulsating striations. These latticework-like backdrops betray the visual language of the French-Iranian artist Sassan Behnam-Bakhtiar. One part of a series of works titled Present the Future, the paintings are the result of an NFT art residency organised by the collector and Volta art fair director Kamiar Maleki, branded the first of its kind. Tinie Tempah with Sassan Behnam-Bakhtiar Images courtesy of the artists

The flowers reappear in a collaborative digital work presented in the hotel’s lobby, produced by the UK digital artist Vector Meldrew, which will be minted into a unique 90-second NFT. There, an image of one of Bakhtiar’s aforementioned paintings disintegrates into rainbow gumballs, which are then recomposed into diamond-like prisms, set to a song composed by the UK rapper Tinie Tempah. Images of the other five paintings will be minted into five 30-second-long NFTs (250-500 editions) and sold on 21 July in a drop on Nifty Gateway.

Despite these online releases, the physical world is very much the starting point for the collaboration between the three men—Bakhtiar, Meldrew and Tempah—who spent seven days (from 7-13 June) working together in the rather lush residency at the Grand Hôtel. 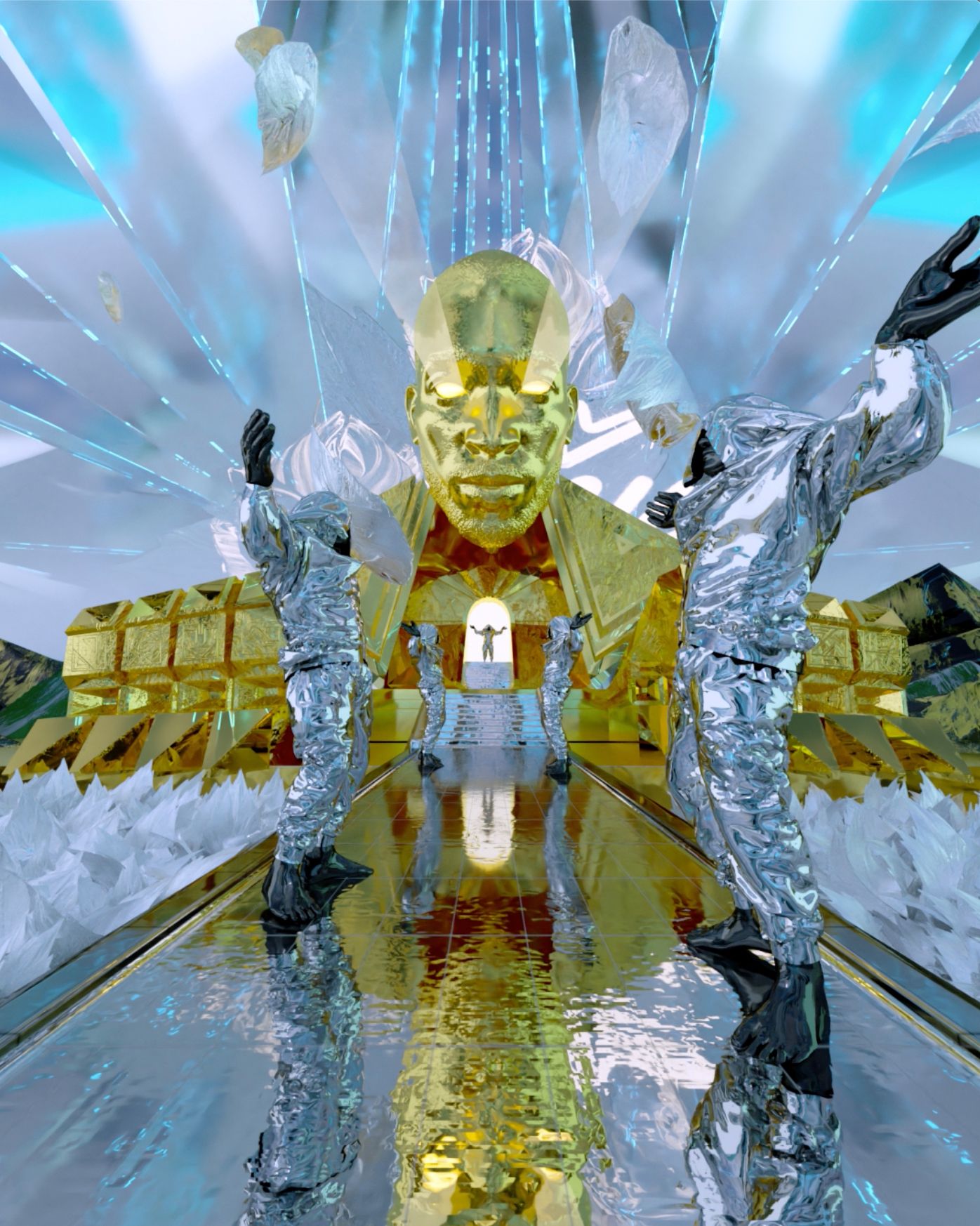 An NFT video still of Present the Future, a collaborative digital artwork by Sassan Behnam-Bakhtiar, Tinie Tempah and Vector Meldrew Images courtesy of the artists

It was last year, when Tempah visited Bakhtiar’s exhibition Rebirth, inaugurating a new cultural space at Saint-Jean-Cap-Ferrat, that they decided to bring the worlds of music and painting together. When NFTs took off, Meldrew, who has collaborated with Tempah in the past, was brought into the mix. (Their last production was the 2012 London Olympics campaign called "About to Blow", which featured Tempah and Mo Farah and almost got cancelled by London's then mayor Boris Johnson for evoking terrorism).

Meldrew’s anonymous hooded figures in shimmering tracksuits accompanied Tempah’s monumental golden face in the resulting retro-futuristic NFT mark how far he has come from documenting London’s grime scene through pirate radio stations and websites as a teenager. Tempah’s voice was part of that underground vibe, though now it is more mainstream pop culture. In a way the music industry mirrors the drastic commercialisation of the art industry. 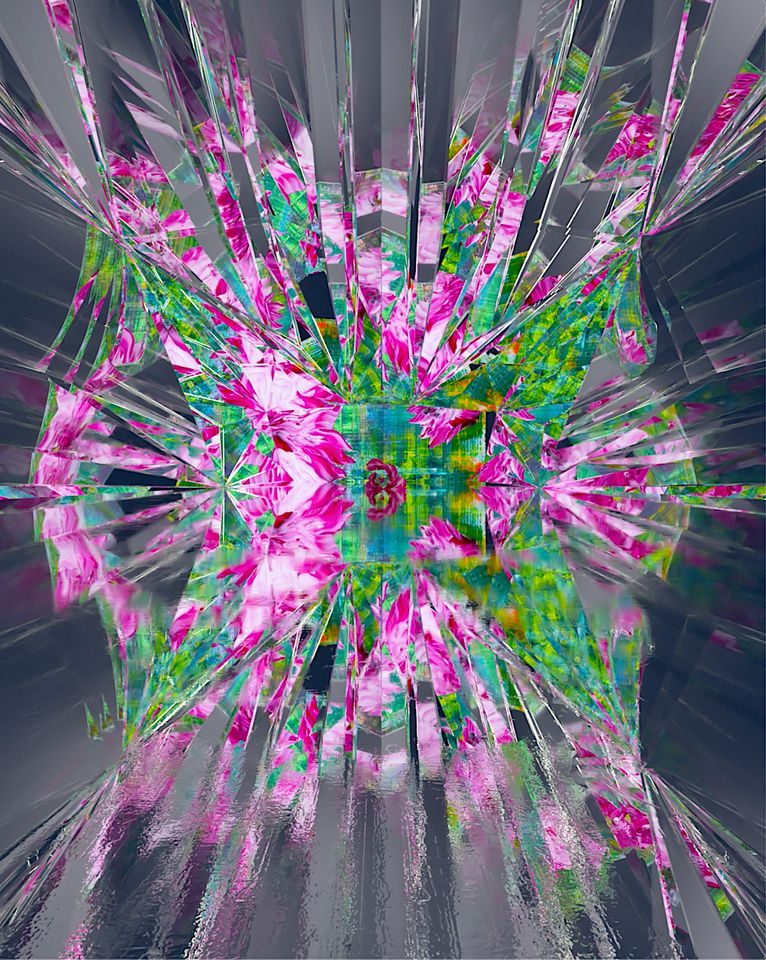 An NFT video still of Present the Future, a collaborative digital artwork by Sassan Behnam-Bakhtiar, Tinie Tempah and Vector Meldrew Images courtesy of the artists

Present the Future looks at the future in light of the past. “We wanted to take a step back and connect our physical environment, this beautiful planet, with the digital movement that is pushing ahead constantly,” says Bakhtiar. “The internet has felt dystopic and no longer about the liberties it was created for. NFTs have changed that,” Meldrew adds. “It feels very much to me like when I was a teenager in internet chat rooms, building forums and communities around ideas.” 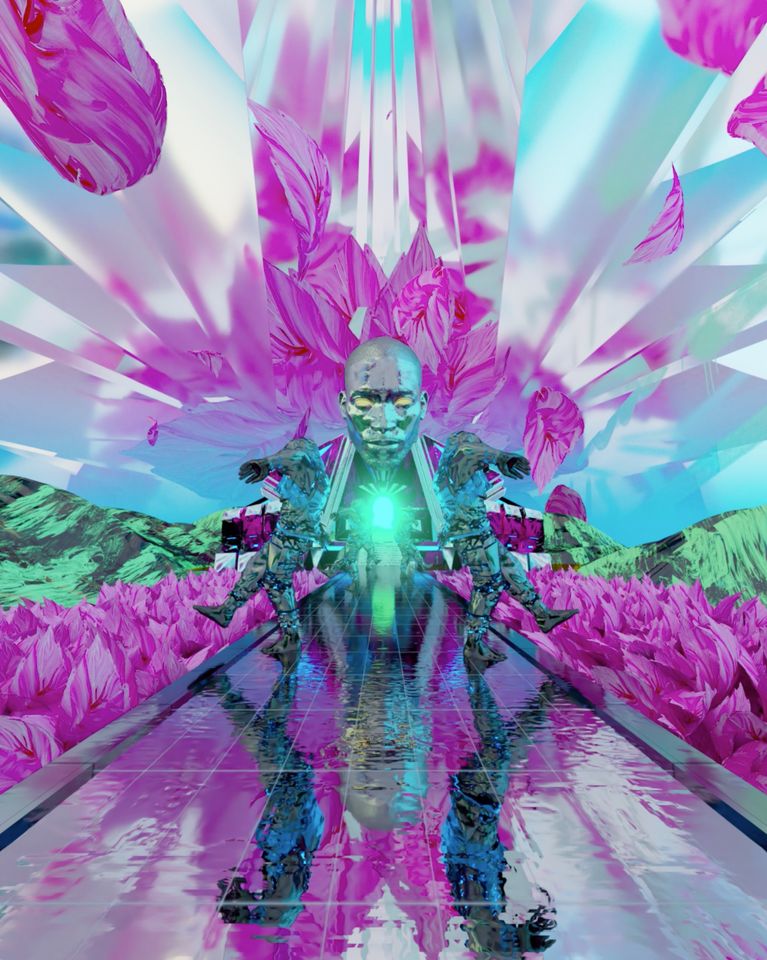 An NFT video still of Present the Future, a collaborative digital artwork by Sassan Behnam-Bakhtiar, Tinie Tempah and Vector Meldrew Courtesy of the artists

The culmination of the residency had Tempah rhyming to a live painting performance by Bakhtiar in the hotel’s manicured gardens: “Future is nigh/Our imaginations intertwine… Interspace hyper… Take us higher.” Bakhtiar began with his floral symbols, which draw from an early childhood memory of a field of wild tulips in northern Tehran—an image he says gave him hope when he got into trouble with the Iranian authorities. As Tempah (whose floral suit revealed no stains) contributed splatters of paint to the mural-sized canvas, so did members of the audience, to whom Bakhtiar handed his construction tools, and all forms disappeared in streams of what looked like sound frequencies. Present the Future, a one-off, live, collaborative performance of live painting by Sassan Behnam-Bakhtiar and a musical and spoken word performance by Tinie Tempah Images courtesy of the artists

This concert will become the seventh NFT of Present the Future, as a unique edition created with edited drone and camera footage. Although as a performance it lacked the edge of the digital images, there was something magical about the artists sharing their process like an openwork object. In the end, the process—creating an NFT derived from a collective painting in the real world—took precedence over the product.