There are arguably few American cities that identify as closely with their architectural heritage as Chicago. Yet while participants in one of the city’s popular architecture tours are usually informed that the city’s name derives from the Miami-Illinois word shikaakwa, this is typically the last mention of the original inhabitants of what was once one of the most vital portage sites for Indigenous Peoples of the Great Lakes region.

With its title …and other such stories, the third Chicago Architecture Biennial signals its commitment to addressing the histories of displacement, privation and segregation that inform the city’s urban design as surely as its most vaunted structures do. It joins a number of biennials reckoning with the colonialist dimensions of their host cities and their impact on contemporary urban realities. 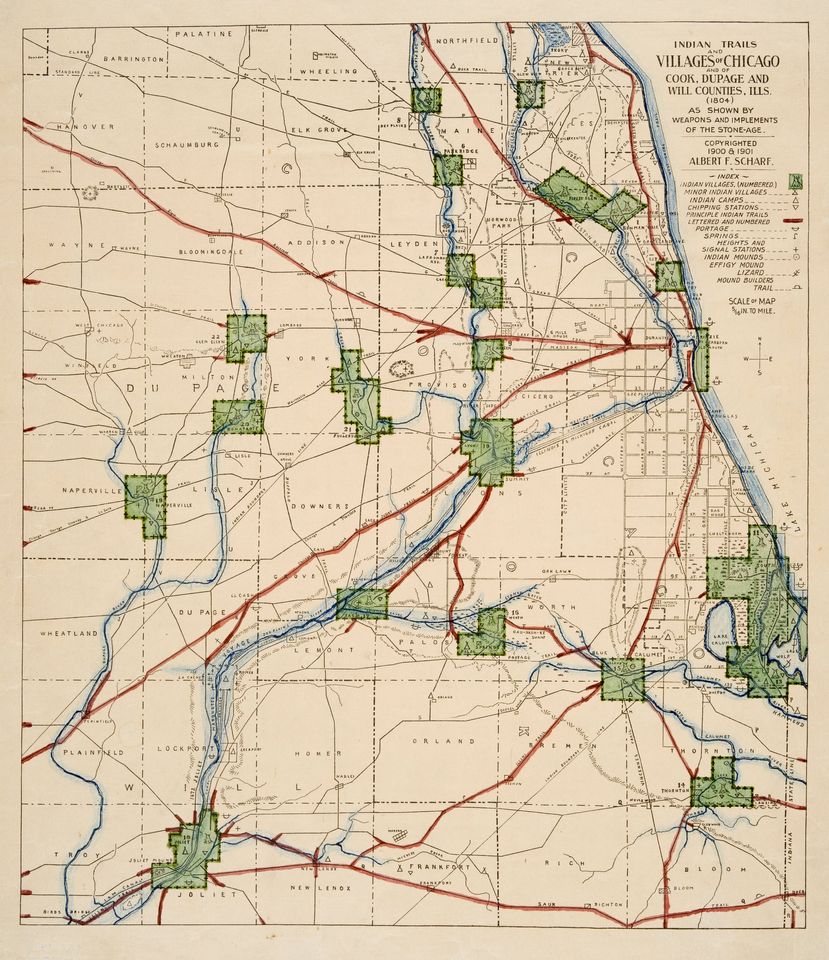 Map of American Indian trails and villages of Chicago, Illinois, and of Cook, DuPage and Will Counties, Illinois, in 1804. Map by Albert F. Scharf, 1900-1901. Villages highlighted in green; principle trails in red; and waterways in blue Courtesy of the Chicago History Museum

For example, one programming initiative with the Settler Colonial City Project in collaboration with Chicago’s American Indian Center reconciles Chicago’s modernisation with the forcible removal and dispossession of Indigenous people that mainstream historical accounts erase. Euphemistically referred to as “the People’s Palace,” the Biennial’s host building, the Chicago Cultural Center, might easily dazzle viewers with its glittering Neoclassic marble and mosaic interiors. Yet the site-wide installation, led by architectural historians Andrew Herscher and Ana María León, both of the University of Michigan in Ann Arbor, “annotates” the material and spatial histories that constitute this luxurious spectacle through a series of didactics strategically placed throughout the building, as well as a corresponding publication.

"We're not simply telling a different story about the Chicago Cultural Center,” León says. “We're allowing the building to tell its own stories, in particular its stories around colonialism, both nationally and globally."

Drawing inspiration from traditions of Indigenous knowledge manifested in human beings, places, and the natural world, Herscher and León amplify the voices of individual elements within the structure. The building's stately mahogany doors, for example, are the products of colonialist outposts in East India during the 19th century, while the Tiffany Dome that crowns the third floor is a monument to the success that Tiffany & Co. enjoyed by celebrating westward expansion, the closing of the frontier, and the displacement of Native Americans during the Golden Age. 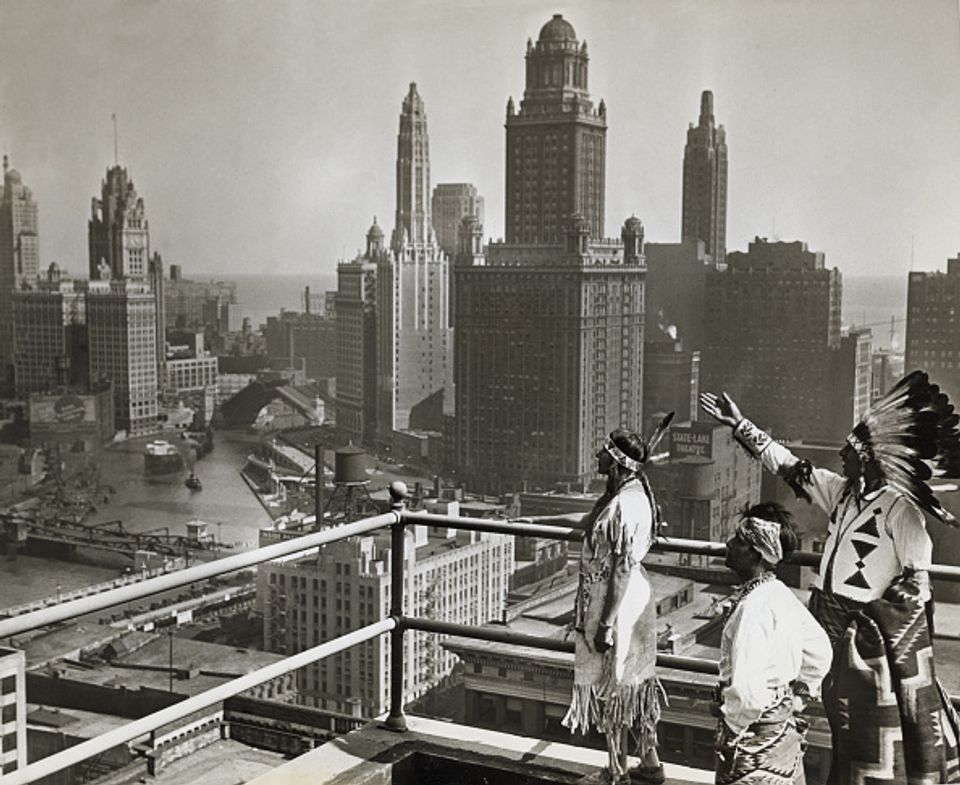 Princess O-Me-Me, a Chippewa, Sun Road, a Pueblo, and Chief Whirling Thunder, a Winnebago, look over Chicago's skyline from the roof of the Hotel Sherman, 3 October 1929 Photo: Underwood & Underwood/CORBIS/Corbis via Getty Images

Notably the Cultural Center also sits on an indigenous territory that remains officially unacknowledged in the heart of downtown Chicago, and it is one of many such sites in the city, which also include some of its most iconic causeways famously designed in 1909 by Daniel H. Burnham and Edward H. Bennett. Ultimately, León says the project frames how the colonial processes of extraction, erasure, dispossession and violence yielded the now architecturally pedigreed city.

The biennial’s curatorial team, comprised of curator Sepake Angiama and architect Paulo Tavares, as well as its artistic director Yesomi Umolu, further establish historical erasure as part of a continuum that includes more contemporary effacements forced by gentrification. Noting the particular “sort of attrition” that marks waves of urban displacement over the city’s history, Umolu says: “Gentrification has shaped Chicago’s neighbourhoods differently than it has those of other North American cities, due, ironically, to the prevailing ethos of segregation.”

Gentrification is often understood as shifting the racial/ethnic and economic composition of low-income neighborhoods through an influx of middle-class wealth. But in certain parts of the Chicago, “the demographic specificity of neighborhoods combined with entrenched attitudes towards race have made it more difficult for gentrification to take its expected form of shifting racial compositions”, Umolu says.

This is a process that the Chicago artist and urban planner Theaster Gates aims to disrupt in his ongoing engagement with the South Side. In 2009, Gates initiated Dorchester Projects, a facet of his nonprofit organization, the Rebuild Foundation. Under its umbrella, the artist has acquired a number of South Side properties and renovated them into the troves of black American culture that are Archive House, Listening House and the Stony Island Arts Bank. Gates’ primary medium is real estate; his aim for the biennial is to make the inscrutable mechanisms of land acquisition that he had to master comprehensible to the publics that have been disfranchised by these processes. While the documents that chart Gates’ acquisitions in plain text and images may initially appear dryly ascetic, as conceptual art often does, the material effects of this gesture are “very real for Chicago residents who have over the decades lost billions of dollars through practices of contract buying and redlining that have withheld the equity that home ownership was long supposed to guarantee”, Umolu says.

In an iteration of their ongoing Justice Hotel project that will coincide with the Biennial, 6018North Director Tricia Van Eck and artist Amanda Williams grapple with the concept of value, an abstraction that is nonetheless weaponised in the politics of urban space in America. In their 2005 decision in Kelo v. City of New London, the Supreme Court affirmed the right of private entities to seize another’s private property for redevelopment if the owner’s use of their property was determined to be “undeveloped,” and therefore worthless. Eminent domain is the process by which many of the properties on the South Side have come to be abandoned, seized by private companies that force the evacuation of their residents.

Williams executed her acclaimed Color(ed) Theory series within this terrain, developing a variety of hues that signal coded cultural meanings depending on the receiver’s experience of urban space, and applying them to Englewood houses slated for demolition. The project brought to the fore just how powerful a role color plays in signaling how social and financial value is assigned, from redlining to commercial product branding.

The artist’s earliest large-scale articulation of this series is still extant in the attic room of a century-old house in the comparatively affluent Edgewater neighbourhood. Van Eck now operates the art organisation and exhibition venue 6018 North out of this space, which Williams, Van Eck and a group of 25 concierges/curators from ALAANA backgrounds are temporarily converting into Justice Hotel, a provisional lodging house they hope to make the official hotel of the Biennial and a forum in which to activate alternate systems of exchange.

Musing over their plans for a rather utopic venture in which guests will be housed, fed, and engaged in a series of conversations about how justice and luxury are typically understood to be antithetical to one another, Van Eck has encountered a host of practicalities that she, Williams, and the concierges have been navigating in determining how to practice justice in executing the work.

“The concierges are determined that intrepid justice is present throughout, from programming the dinners to cleaning the rooms,” she says. “Hotel workers are also co-owners, and services are infused with art and equity. Hospitality is a way to fulfill our objective of justice by changing a privileged and stratified space of consumption into a communal space of equality.”

Operating as an affiliate Biennial program partner, Van Eck and Williams will through this iteration of Justice Hotel consider what it really means to establish a brick-and-mortar, cooperatively-run version of the project to eventually be located on sites in danger of being taken by eminent domain or other inequitable land practices. Williams explicitly disavows the notion that her projects' objectives are to “fix the South Side,” emphasizing instead the hope that that “this temporary concretization of the amorphous Justice Hotel project might serve to provide one more piece to the puzzle of how art and artists can uniquely address the wickedly complex problems of urban atrophy through creative development strategies.”