Frank Stella: A romantic, after all

As a major retrospective opens at the Whitney Museum of American Art, the US artist reflects on how beauty is “a given” in art—and how, after nearly 60 years, he is still pursuing “the problems of painting”

Frank Stella feels no pressure. When we spoke, less than a month before the opening of his retrospective at New York’s Whitney Museum of American Art (30 October-7 February 2016), he was chatty and at ease. He is used to talking about his work. Stella, now 79, is of a generation of artists who are unafraid to steer the reception of their art. His most famous quote about his work—“what you see is what you see”—was offered in 1964 in the spirit of clarity. “That doesn’t leave too much afterwards, does it?” asked his interviewer, Bruce Glaser. “I don’t know what else there is,” Stella replied.

Stella is still a straight talker. There is little nonsense in his vocabulary. His answers to questions are measured and deliberate. But he no longer carries the historical burden of Minimalism, a movement he led, largely unintentionally, throughout the 1960s. These days, the artist has no anxieties. “I feel that one of the nice things about outgrowing everything is that it’s up to everybody else now,” he says.

The Art Newspaper: From an artist’s point of view, what goes into putting on such a big exhibition?

Frank Stella: It’s a lot of work, but in a funny way, the artist is after-the-fact. After [the organisers] tell you what they want to do, you have to kind of correct it and put in the obvious things that are missing. And I don’t want to labour the point, but it wasn’t my idea for it to be a retrospective. So once they make it a retrospective, you’re dealing with 50 years of work, and that creates its own kind of problems.

What would you have preferred instead of a retrospective?

Everyone says I had two retrospectives [at the Museum of Modern Art, New York], but actually, that’s not true. One was in 1970; the other was [of work] made from 1970 to 1987. So this show could have been from 1987 to now. I don’t think that would have hurt anything. But the [organisers’] argument is that all these people weren’t born yet. So that’s the way it played out. But there is something about the museum that’s special. It’s doomed to success because of the [neighbouring] High Line [park] and because it’s a really wonderful, generous building. But since the Whitney moved downtown, it’s expanded, and in general, I’m against all expansion. As you get older, you’d rather see things shrink like you do.

But you did convince the curators not to arrange the show chronologically.

Yes, but that wasn’t so easy to come to. It’s not going to be really achronological, but there will be a lot of places where you get to see what happened later and there will be some objects around it that are from earlier. But I think the idea is that you’ll see some connections. You’ll see how, for example, the Irregular Polygon paintings [1965-66] had something to do with what happened with the Polish Village paintings [1970-74]. They’re not that dissimilar. What happens when you make everything strictly chronological is that it becomes very artificial. It would be possible, I suppose, if you had a conventional gallery, but [the Whitney] is an open space. So when you make a room and put things in it, you lose the flow. You want some kind of path, some kind of movement. Not that it’s as simple as that, but it has to look good. It’s not about getting locked into a certain room. I mean, you wouldn’t want to walk off the elevator and be caught in a hallway of black paintings! 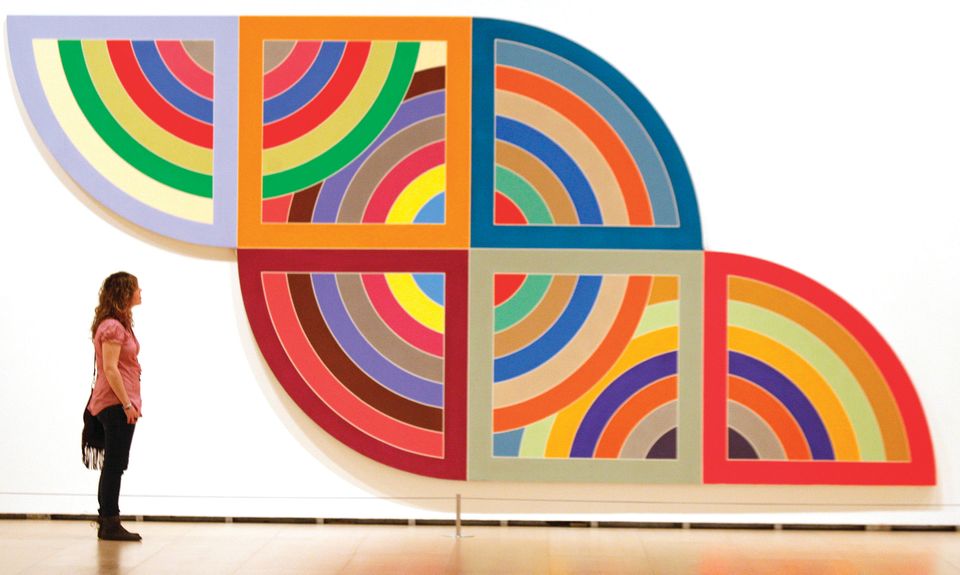 A woman eyes the US artist Frank Stella's painting 'Harran II' as she visits the exhibition 'Painterly Abstraction, 1949-1969: Selections from the Guggenheim Collections' during its presentation at Guggenheim Bilbao Museum, in Bilbao, Basque Country, northern Spain, 14 June 2011. EPA/ALFREDO ALDAI

Your work has changed a lot since the Black Paintings (1958-60). But the core argument the curator Michael Auping makes in the catalogue essay is that there is a way of seeing that cuts through all your work. Do you agree?

I can’t guarantee it. Most of the time, you say of an artist that he has a style or a gesture. You can follow his hand or see the way he thinks. I think it’s true of me, too. But the fundamental thing is that, even in the early paintings, structure is pretty important. Those paintings are trying to find a way to organise themselves and I feel that’s always underneath whatever I do. I’m not really capable of abandoning that kind of structure. I don’t know if you want to call that pictorial coherence, but whatever it is, that’s what’s there.

It’s not much of a question because it’s a given. I mean, nobody sets out—even though people say they do—to make bad and ugly paintings. I think you have an innate sense of touch, and maybe it’s a kind of taste. It seems to me that the colour in my painting is the same all the time. It’s part of the style. You do have a style, in a way, no matter how much you change the organisation of things.

So are you still pursuing the problems of painting?

That’s what I know. That’s how I started; that’s what I still like. I think the problems of sculpture and architecture are slightly different. But there’s always been painterly sculpture. And probably now there is more painterly architecture than we’ve had before. I don’t know what to say about that.

Your titles often have literary or historical allusions. How do they come to you?

Really, it’s hard to say. It’s basically so you can identify it. Sometimes it seems to really work and sometimes it’s essentially peripheral. There’s no point in getting bogged down by that. I don’t have to be illustrational. I think the Moby Dick series [1986-1997] is a kind of turning point. I was a little afraid, and probably still am a little, with Moby Dick, but the pictures [are] essentially curved surfaces. They started to really move, and the novel moves; you’re going around the world, it’s pretty wet, there are a lot of waves and motion. I think the idea is pretty straightforward. I’ve said it many times: abstraction can be a lot of things. It can, in a sense, tell a story, even if in the end it’s a pictorial story.

You work very quickly. Your Polish Village series (1970-74), for example, comprises more than 100 works. How do you sustain that pace?

It doesn’t seem so fast to me. All I can remember are the parts that slow everything down. I don’t honestly think about it. One of the things is, I do have a plan. Up until fairly recently—the past 20 years or so—I always had drawings for whatever I made.

Do you ever have crises?

Yes, I know, everybody wants there to be crises. Well, there certainly are, but I don’t know if they deserve to be elevated to the level of “crisis”. I would call it more doldrums or treading water, when you know you’re not really going anywhere. But there’s nothing much you can do.

But you would not call yourself a romantic.

That’s not quite true. It’s a kind of given. It’s part of the business of equilibrium and being able to stand up [a work of art], but in the end, you wouldn’t bother making paintings if you weren’t romantic. There’s really no analytic-aesthetic enterprise that I know of, that I’ve ever seen.

What’s the most important thing for you today?

Literally, I mean. It’s corny, but it’s true. I like to see things. It sounds so incredibly trivial, but the only thing that’s not so great about not being able to move around so much is that it’s hard for me to get around Chelsea. I’d like to go into all of the galleries, no matter what’s in them, which is what I used to do in the old days. But I just can’t do it any more.

What do you do instead?

I always had a sense that the 18th century was eluding me. I only had a sense of art history from the 17th and the 19th centuries, but something happened there in between. So I’m reading about 18th-century art—a book called Rococo to Revolution by Michael Levey. He’s often quite severe on the artists he’s praising. Given what people say about artists now, it’s pretty sharp-tongued. One of the things he says, which is quite wonderful, is that in the 18th century, pleasure was an occupation. It’s really a wonderful line. I could settle for it now.