The Baghdad-born, Los Angeles-based artist talks about the impetus for her new work at Susanne Vielmetter

In 1991, when the Baghdad-born artist Hayv Kahraman was ten, she was part of the mass exodus of Kurds fleeing Iraq to escape Saddam Hussein’s brutal regime. She remembers sitting in a car with her mother and sister, stuck in almost-immobile traffic as they approached Iran from Sulamaniyah. The 50-mile journey took 11 days. They ran out of both gas and food on the voyage, to the point where she sliced a cashew into quarters and pocketed it for safekeeping. Then they discovered the border was closed and the family had to turn around. It would be another year before her mother hired a smuggler, who helped them reach Sweden, where the artist lived as a teenager.

“The main thing I can access from that time is these masses of bodies on the move,” said Kahraman, who is Kurdish on her mother’s side. “I remember seeing this constant flow of bodies from the car window, knowing that we were lucky just to have a car.”

Masses of bodies, somewhere between a pile-up and a huddle, show up in different forms in Silence is Gold at Susanne Vielmetter (until 27 October), the artist’s first gallery show in Los Angeles where she is based. Kahraman previously had three shows with Jack Shainman in New York and is also getting museum attention, with a solo show at the Contemporary Art Museum, St Louis last year and a project room now at the Pomona College Museum of Art, through 22 December. 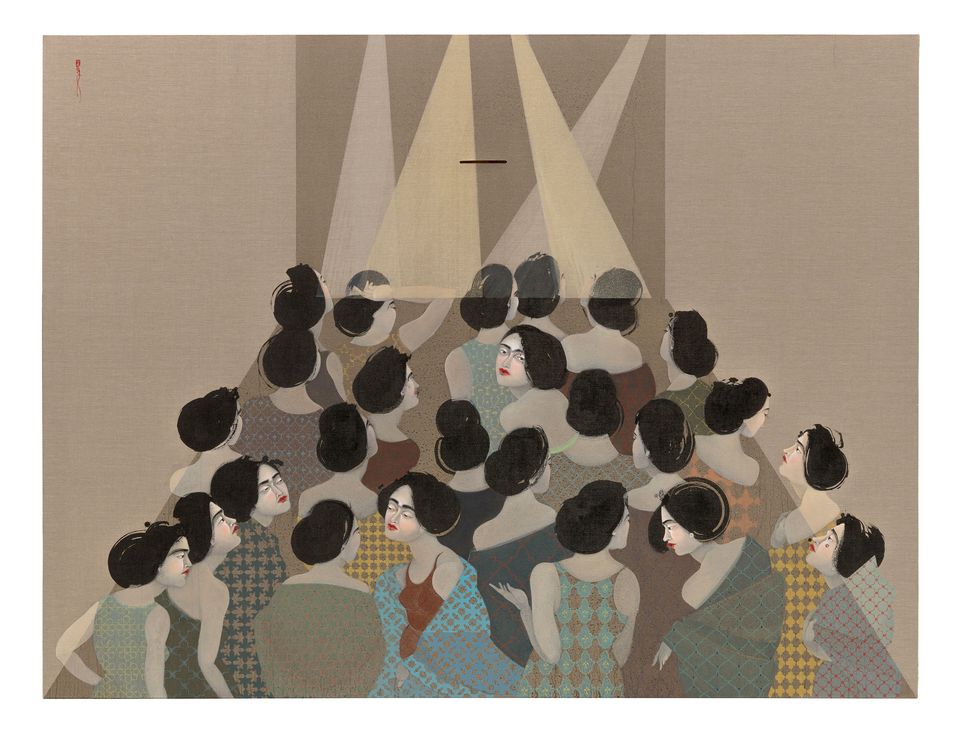 She has rendered crowds of women and also individual portraits in her recognisably stylised manner: curvy, pale-skinned, dark-haired beauties that look like Botticelli’s Venus as seen through the eyes of Japanese ukiyo-e artists. She has also placed a few crumpled-looking carpet cut-outs the size of her own body, rugs handmade in Iran, Afghanistan and Kurdistan, in odd spots of the gallery. Like the paintings, these “oriental” carpets use seductively patterned and colored surfaces to point to an uglier reality: the refugee’s loss of identity, individuality and voice.

This exhibition also reflects the artist’s research into the exploitative strategies and images of modern humanitarian aid campaigns. Because of her research-based process, she calls her work “semi-autobiographical—I go beyond my own memories.” In particular, she became fascinated by a relief concert staged in 1991, The Simple Truth: A Concert for Kurdish Refugees. As she explained, “I found this weird Live Aid campaign, staged in multiple Western cities across the world, where celebrities like Whitney Houston, MC Hammer and Sting performed against this image and video backdrop of impoverished brown Kurdish bodies.”

“From that I started questioning: How do we mediate images in these humanitarian campaigns, these images of 'suffering others', in a way that doesn’t strip them of all their dignity and in a way that allows them a voice?” She also started looking into the ways that women’s sexuality has been used as a tool for raising money—“selling your body for charity” as she put it. 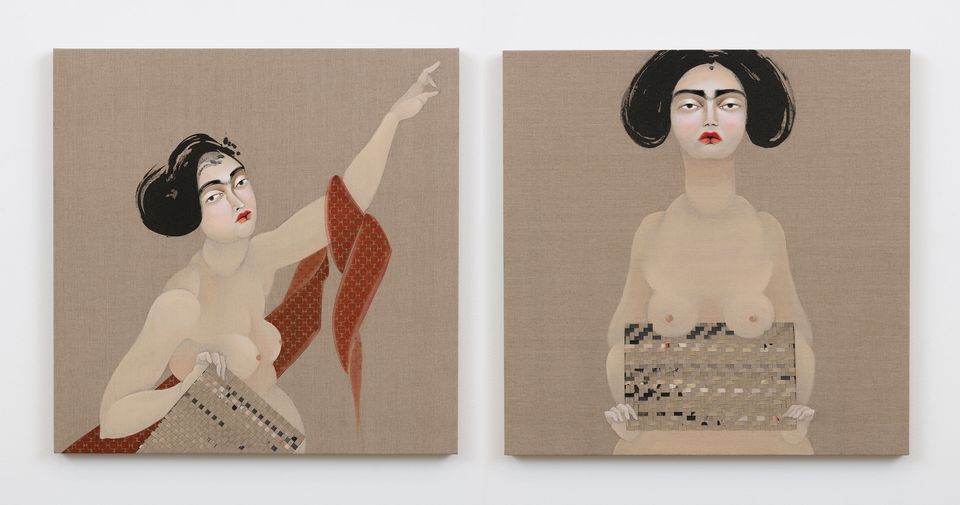 Hayv Kahraman, The Appeal 11 and The Appeal 12 (2018) Courtesy of Susanne Vielmetter, Los Angeles

For one series in the show, a set of 15 new paintings called The Appeal, she has painted women in the sort of sexually suggestive poses she found in an Oxfam print campaign. But instead of waving some marketing brochure or photo, each woman in her paintings holds a mahaffa, a fan woven from palm fronds that is a symbol of Iraq and a recurring image in Kahraman’s work.

Nearby, at the entrance of the show, the 2018 painting on linen Donation Mouth, features the face of a heavy-browed, heavy-lidded, vaguely Middle Eastern-looking woman whose tongue has essentially been cut out—a strip of linen has been removed from where her mouth should be. The show’s title, lifted from the popular saying “speech is silver, but silence is gold,” seems especially pointed in this context, suggesting that refugees gain currency or value for being seen and not heard.

The end of the exhibition makes Kahraman’s idea of sexual-image trafficking in the name of philanthropy even more explicit. Hanging on one wall, in column formation, are seven small paintings showing close-ups of labial folds. Only in place of each vaginal opening, the artist has used an x-acto knife to cut one of her slits. 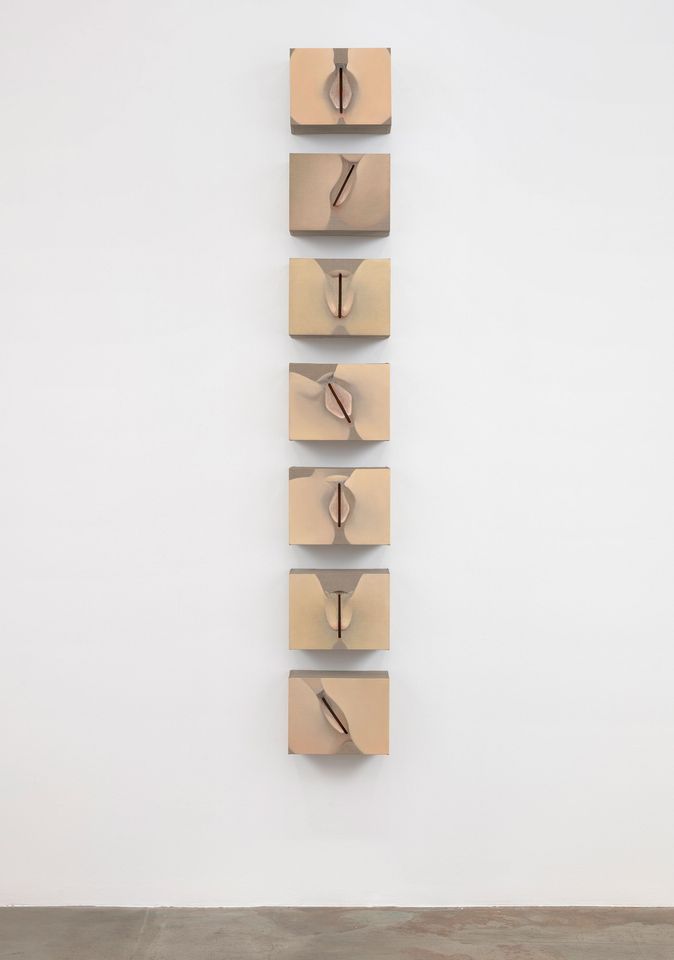 Looking at the paintings, Kahraman said she toyed with the idea of inserting an actual dollar bill into the slots. No need. It is clear that the women in these paintings, or rather the mediated images of fragments of women, are spreading their legs for money. The title is explicit too: Pussy Donation Boxes.

“I’ve shown a lot in the Middle East and there’s still an element of censorship there—they don’t want any nipples or vaginas,” she said. “My work is not just about being shocking, but I love that here I’m free to do anything I want.”