A new book looks at the life and work of the Italian architect and designer, famed for his Pirelli Tower and Superleggera chairs

The Italian architect and designer Gio Ponti (1891-1979) is best known for his streamlined skyscraper the Pirelli Tower in Milan, Superleggera chairs and the Gran Madre di Dio cathedral in Taranto. But he also designed toilets, knives and forks; fitted out cruise liners and hotels; and co-founded architecture and design magazines.

A new book titled simply Gio Ponti and published by Taschen brings together the designer’s huge output as well as giving a glimpse into Ponti’s family-oriented life. Below is a selection of images from the book. 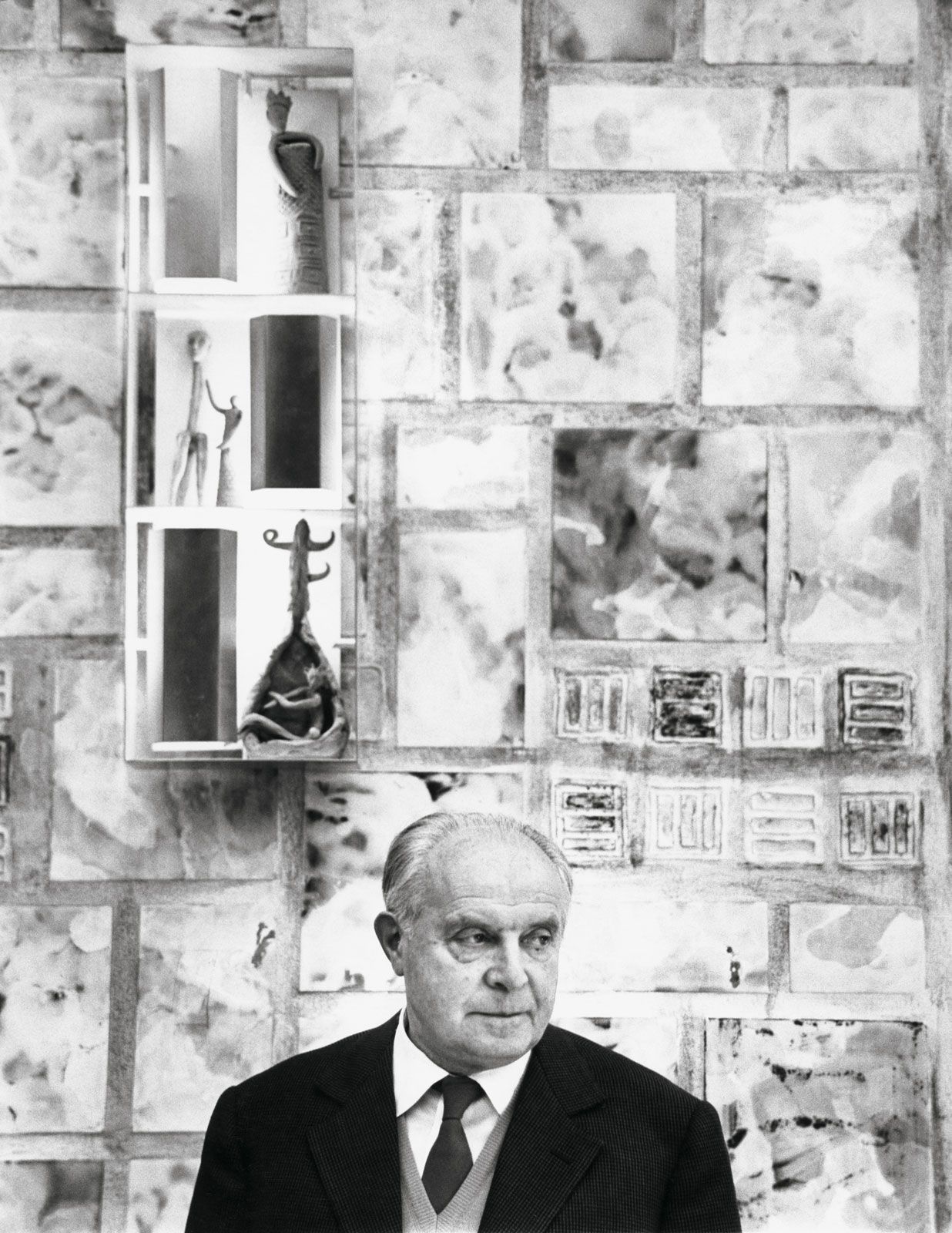 Gio Ponti in 1959 at the New York office of the Alitalia air line. In the background are works by Fausto Melotti, one of several ceramicists whose work Ponti used in his interior designs. 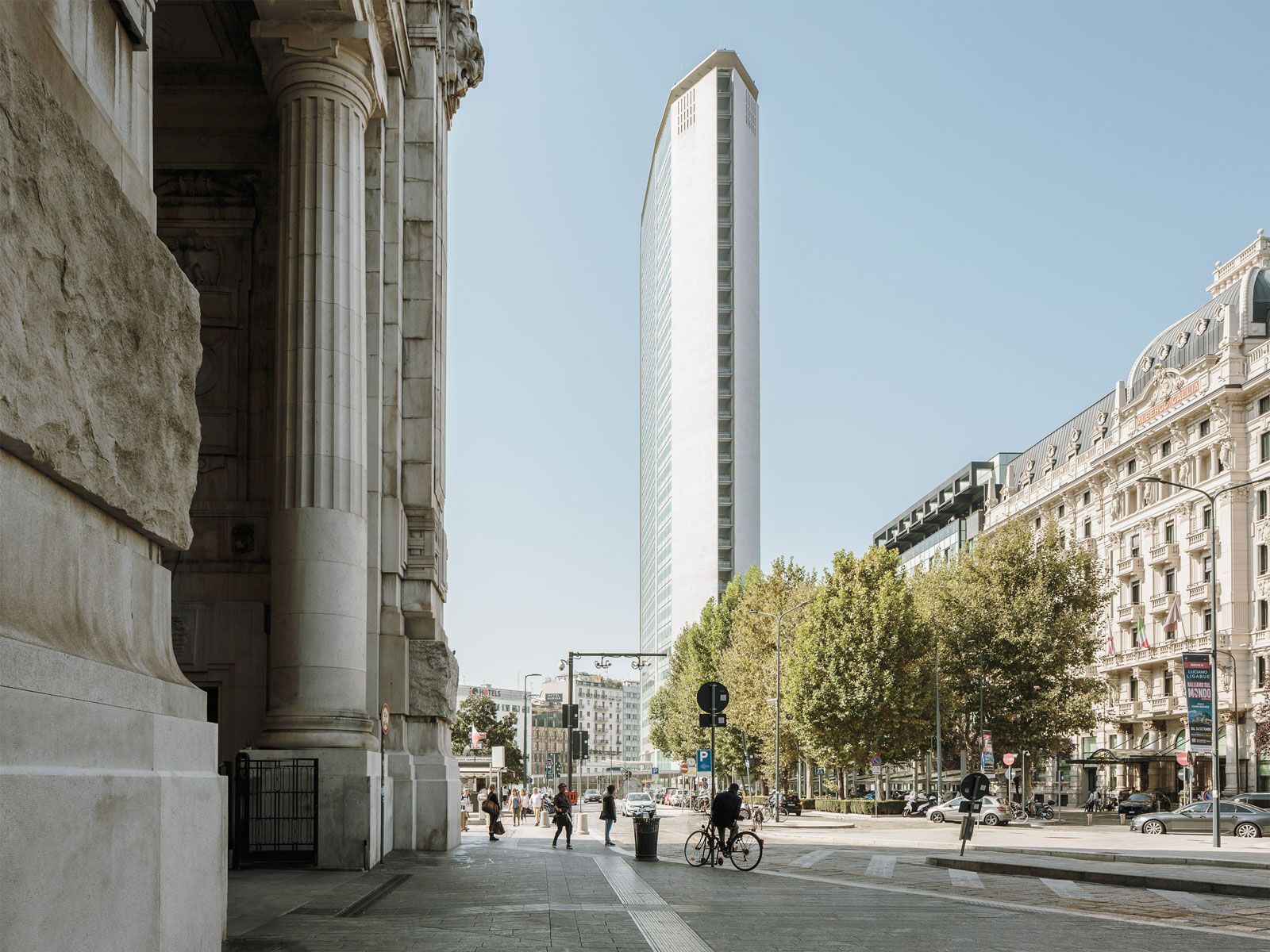 The Pirelli Tower in Milan was commissioned by Alberton Pirelli, the owner of the eponymous tyre company, in the early 1950s. The 127m-tall building was completed in 1960 and for a short period was the tallest building in Italy. Today it is used by the regional government of Lombardy. 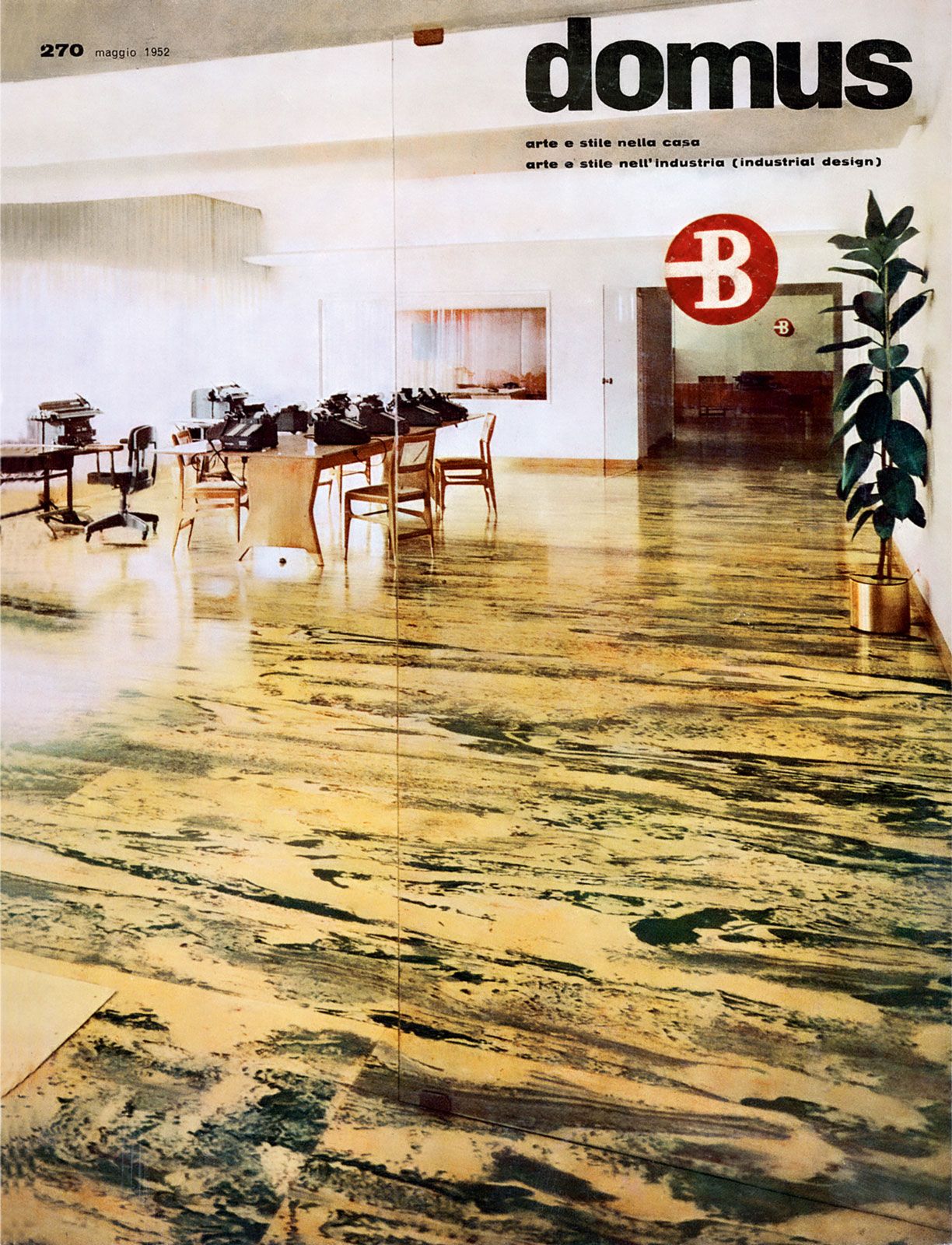 Ponti co-founded the architecture and design magazine Domus in 1928, which continues to this day. This front cover shows the main reception room at the Vembi-Burroughs office in Genoa, replete with Giallo Fantastico rubber flooring, which was designed by Ponti and made by Pirelli. Ponti later founded Stile magazine in 1941, which ran for six years. And while it was ostensibly an architecture magazine, it also published writings by artists such as Vincent van Gogh and as his friend Giorgio de Chirico, alongside Ponti’s own pieces done under 22 different pseudonyms. 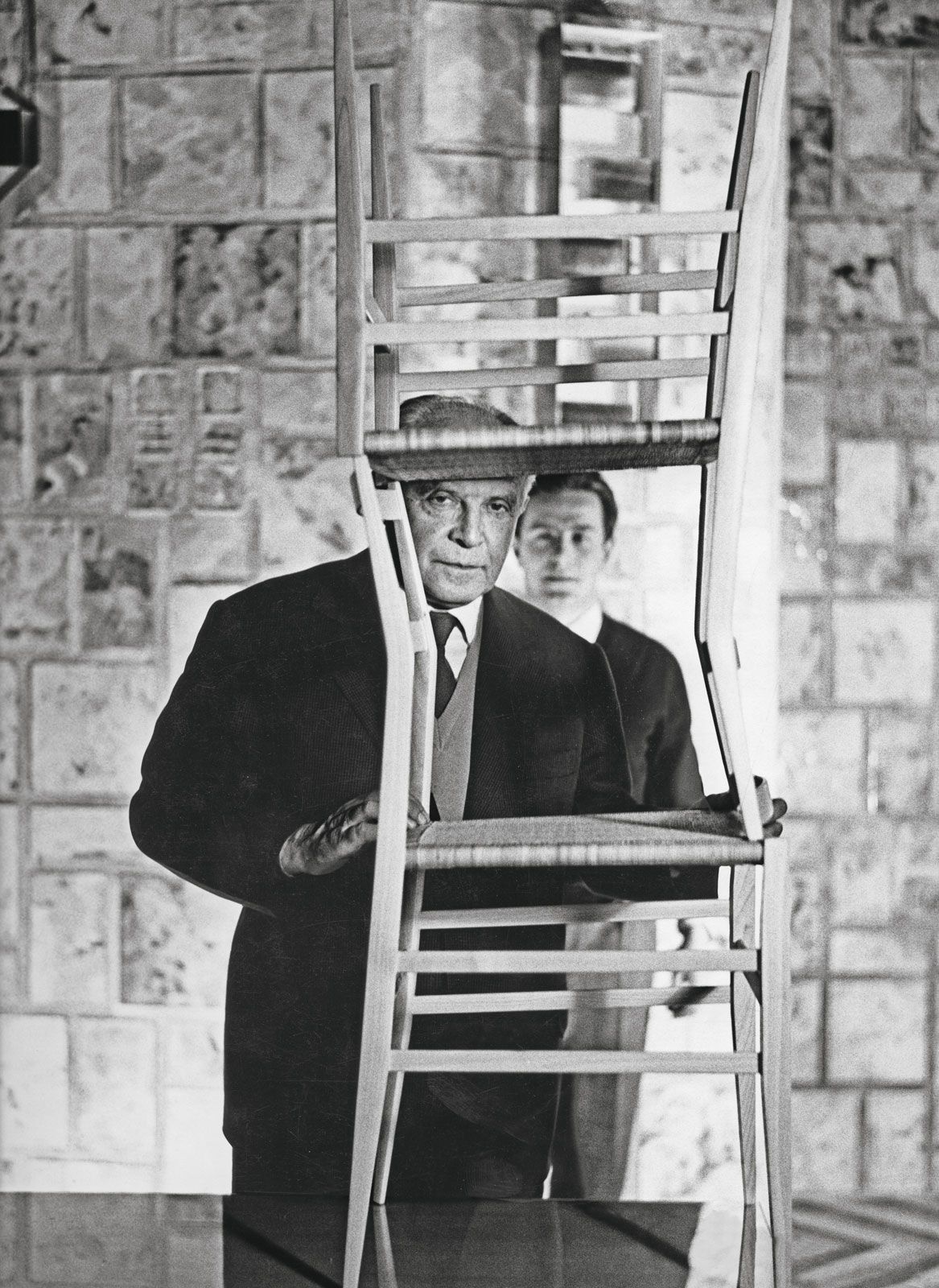 Ponti and his son Giulio photographed in 1957 at the New York office of the Alitalia airline, with two of his signature Superleggera chairs. The slimmed-down, lightweight chairs weighed only 1.7kg and were available in a variety of colours. Ponti would later explain why he thought this “poor nondescript chair” became such a success: “in the anxious drive to express oneself even in the shape of a little nail, we have moved so far away from the spontaneity of truth, from the naturalness and simplicity of things that the appearance of one single thing that is right, spontaneous, ‘real,’ natural, and simple, as we can see, amazes people and is the cause of an absolutely unexpected success.” 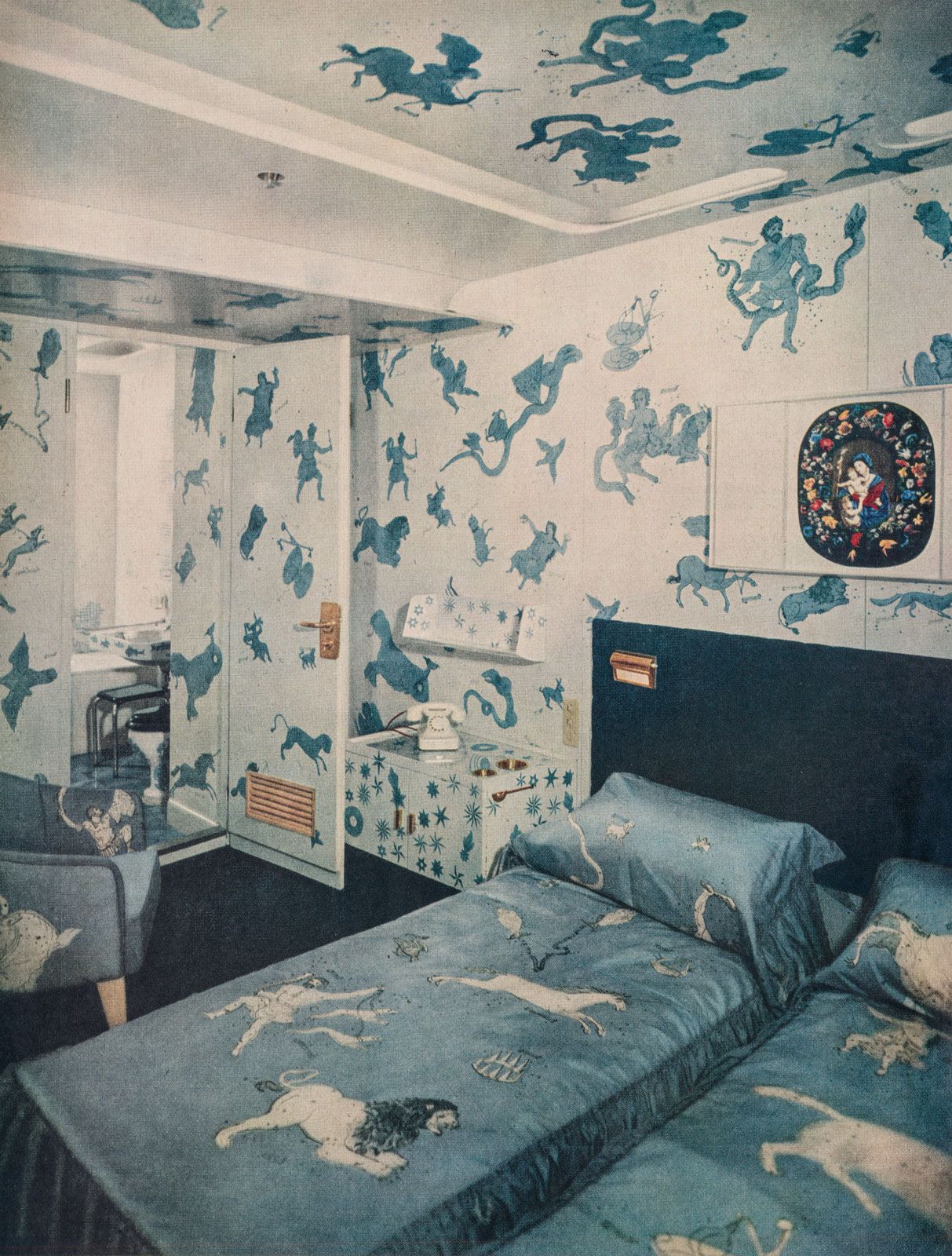 The Zodiac Suite of the Andrea Doria ocean liner was designed by Ponti in collaboration with the Italian artist Piero Fornasetti. 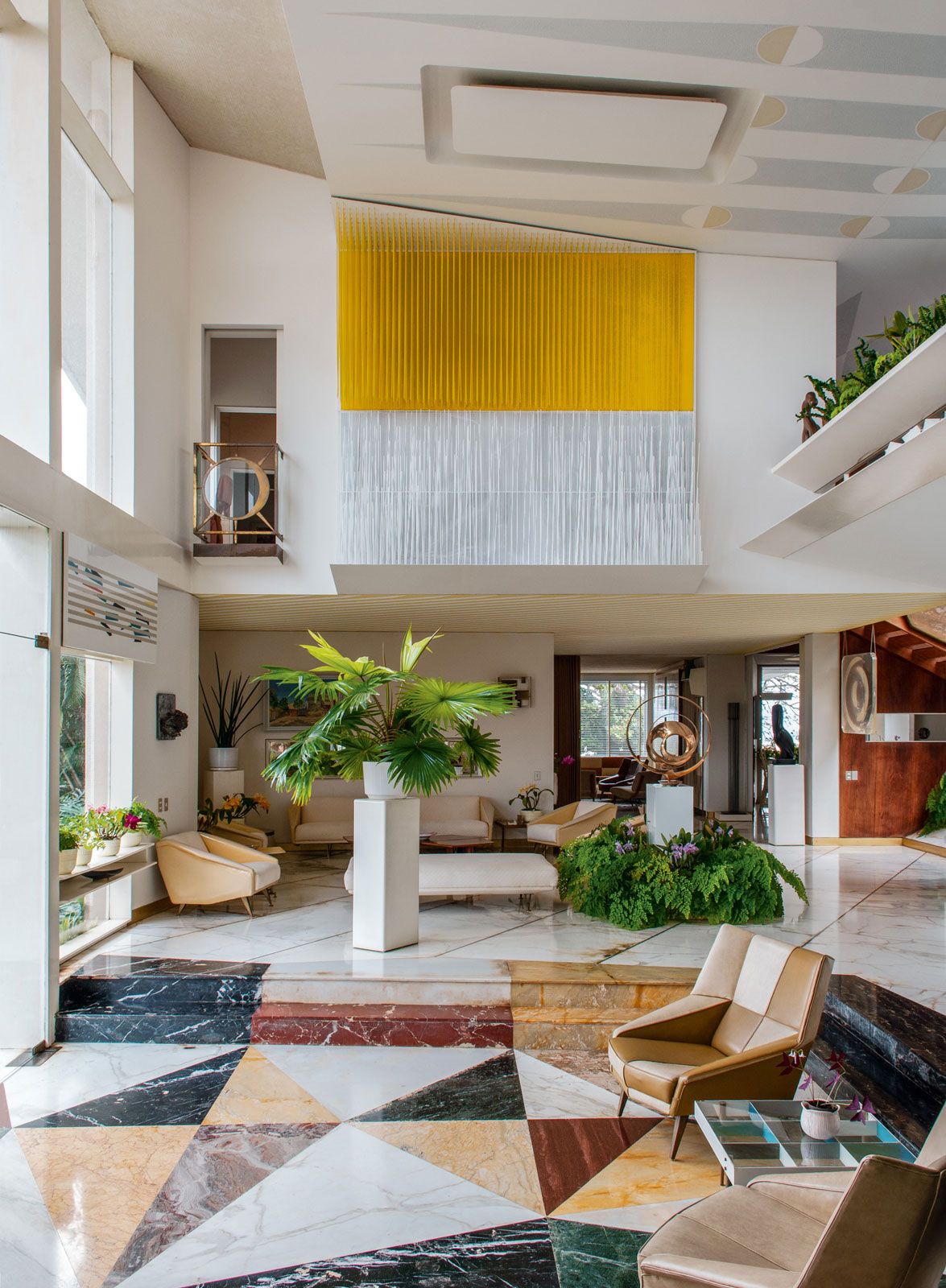 Interior of the Villa Planchart in Caracas, designed in 1953-57 © Antoine Baralhe

The interior of the Villa Planchart in Caracas, Venezuela, was fitted out by Ponti in the mid-1950s and includes his Mariposa leather armchairs in the foreground and a sofa from his Diamond series in the background. The large site specific work by the Venezuelan artist Jesus Rafael Soto was added later. 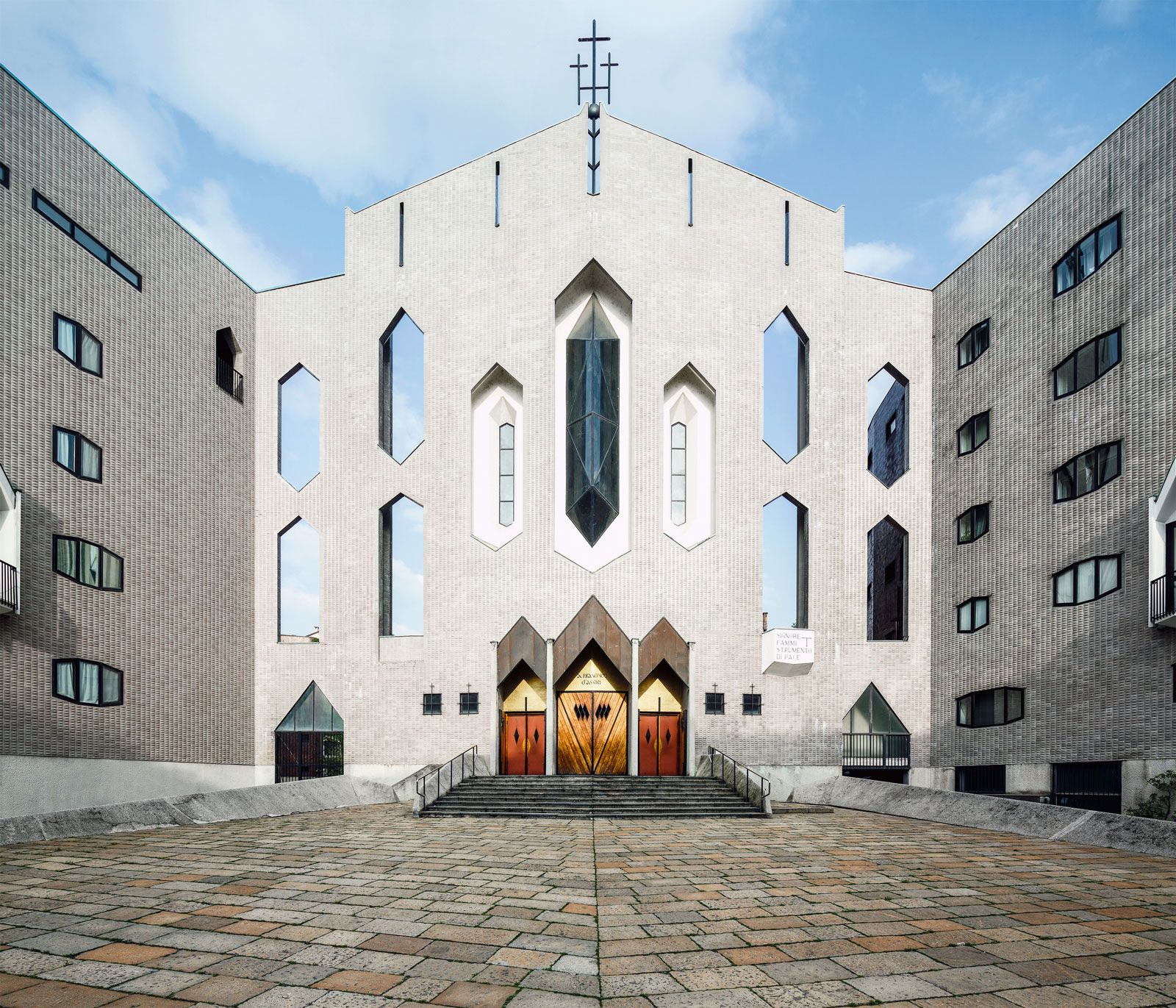 The Church of San Francesco d’Assisi al Fopponino in Milan was constructed in the early 1960s and is covered in light grey, diamond-shaped tiles. Ponti also designed the Church of San Carlo Borromeo in the mid-1960s and later in 1970 his masterpiece, the Gran Madre di Dio cathedral in Taranto. 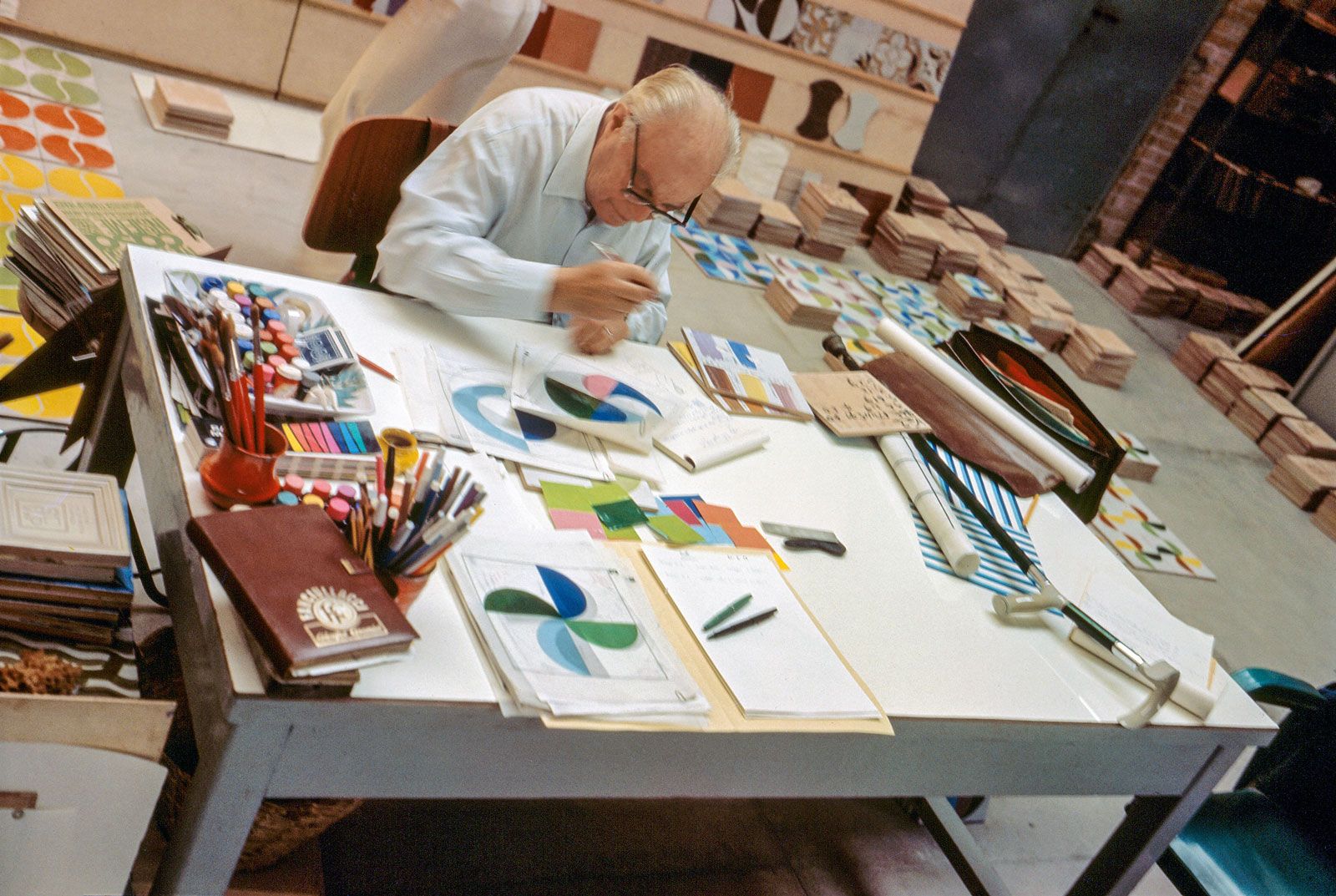 Gio Ponti hard at work designing geometric ceramic floor tiles at the Ceramica D’Agostino factory in Salerno in 1964. The tiles would be used in several of his interiors, including the Parco dei Principi hotels. The Gio Ponti book on top of the Planchart Coffee Table

As well as the regular version of the book, there is also a limited edition that costs £3,000 and comes with a set of four prints and a coffee table based on Ponti's Arlecchino table design—handy as the book is part of Taschen’s XL series and weighs about the same as a small ocean liner.