Paula Rego: 'retire? and do what? eat ice cream?'

She is considered one of the greatest living painters of modern times, has a museum in her name, six honorary degrees and a damehood. But, at 84, Paula Rego is not content to rest on her laurels.

For the past five years, she has been developing her sculptures, which are being shown for the very first time at Art Basel, in a solo presentation staged by her longtime dealer, Marlborough gallery. It is a new direction for the Portuguese-born, London-based artist, who for decades has crafted mannequins and dolls to use as props for her paintings, but has never conceived them as standalone works.

“I’ve made characters so that I can draw them in my studio, [and use] props and dollies I’ve commissioned from family and friends. I put them together to act in my stories, and they appear in many works. More recently, they have been travelling to exhibitions, which they enjoy,” she says.

In her new work, Rego has traded the easily disposable papier-mâché of her models for longer-lasting materials, fusing found and sculpted objects to create fantastical figures—some human, some animal. Priced between $300,000 and $450,000, the three-dimensional pieces are on a par, value-­wise, with her primary market large-scale charcoal works. “It’s a real opportunity; the market [for her sculptures] will develop and continue to expand over time,” says Max Levai, the president of Marlborough.

Alongside hand-coloured etchings, the gallery is also showing several of Rego’s monumental paintings, including The Fitting (1989) and The Family (1988). The larger pictures are priced in the $3m range, in line with her private secondary market, which has recently seen works traded for as much as $6m, far higher than her $1.8m auction record set in 2015.

With most of her work going straight to museums, mainly in Portugal and the UK, or to private collectors who have little interest in reselling, her market has not been subject to manipulation, nor has her practice been “conducive to market hysteria”, according to Levai. Production has always been limited; in some years, Rego has only created around seven or eight pictures.

For Rego, as with many of her female contemporaries, market success was “a long time coming”, she says. Many still regard her work as undervalued compared with her peers. An unflinching political stance, combined with her commitment to figuration and narrative representation, has also meant Rego’s work has tipped in and out of fashion over the decades.

But much has changed since Rego settled in London in the 1970s. “It was a tough time for a woman to receive acknowledgement for a political practice. She was constantly pressured to change her approach, but that was never a question for her,” Levai says.

Now her work appears more timely than ever. Migration, abortion and depression are among the themes she returns to time and again, and curators are not shying away. Her Art Basel presentation coincides with a solo exhibition at Milton Keynes Gallery, her first major retrospective in the UK for 20 years (15 June-22 September). In 2021, she will have a survey exhibition at London’s Tate Britain, while her show at the Musée de l’Orangerie in Paris, which closed in January, was something of a revelation to French audiences. 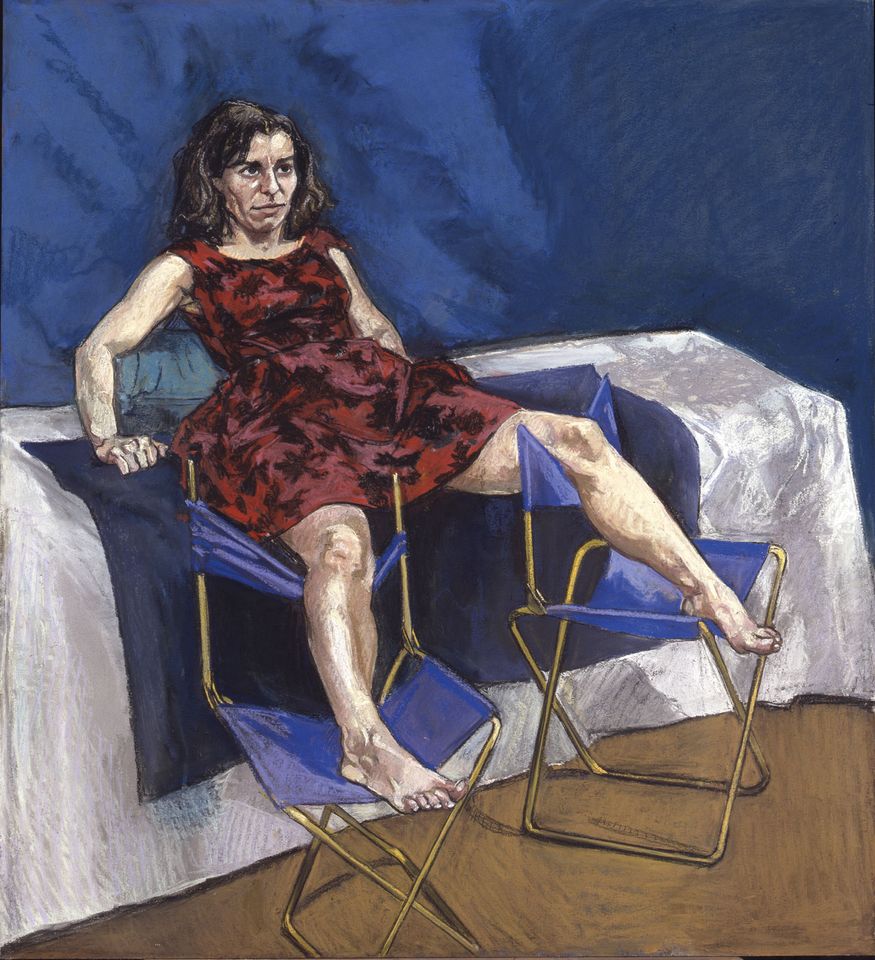 Paula Rego, Untitled No. 5 (1998) Courtesy of the artist and Marlborough

Catherine Lampert, the curator of the Milton Keynes exhibition, says a greater focus on issues that affect women—abortion, female genital mutilation and honour killings—have contributed to a spike in interest in Rego’s work. But she also points out that the artist often adopts a humorous approach to some of the difficult topics she paints. “Sometimes the details in her paintings —the shoes and dresses—are humorous. It’s not just about [painting] heavy subjects in a heavy way.”

Rego appears ambivalent about how much gender discrimination has affected her career. “It is hard for me to tell,” she says. “I was certainly aware that you had to be a man to be [considered] a ‘proper’ artist, but I felt like a man when I was working.” She has said before that “painting pictures is the part of you that’s a man. It has the push, the thrust.”

If she is reluctant to align herself with any particular feminist thinking, Rego has campaigned for decades for abortion rights, creating her first work on the topic, a triptych, in 1998. The paintings and subsequent etchings, on show in Milton Keynes, are her response to the failure of the referendum in Portugal and the government’s decision to not legalise abortion. She considers the works among the best she has done “because they are true, and they were effective in helping to change the law in Portugal [in 2007]”. Rego has also donated 50 etchings, Untitled Abortion, created in 2000 but never printed before, to raise funds for Milton Keynes Gallery (£1,500 each).

Is she surprised, then, that the works continue to be so relevant in light of the wave of anti-abortion laws sweeping the US? “I’m disappointed that after so much trouble to get these rights for women, and after so much suffering women had to endure, that judges feel the need to criminalise what has always happened,” she says.

Other works on show in Milton Keynes include a series Rego made in the 1960s under the regime of the Portuguese dictator António de Oliveira Salazar, which has not been shown in Britain before. They hang alongside pictures such as War (2003), a painting she made in response to a photograph published in the Guardian newspaper of the bombing of Iraqi civilians, and Painting Him Out (2011), which reverses the traditional art historical relationship between male artist and female muse.

As the breadth of her presentations in the UK and Switzerland show, Rego’s practice has defied being pigeonholed – arguably to her detriment. “There’s always a demand from the market and collectors to group people into certain categories, but Paula has a lot of links to different historical movements,” Levai says. “Hers has always been a very personal and linear practice that isn’t so easy to categorise. She’s a unique artist.”

Rego was adopted by the London Group in the 1960s, exhibiting alongside David Hockney and Frank Auerbach, and has been cast as an honorary godmother figure to the YBAs, with whom she shares a patron in Charles Saatchi. Levai also observes connections between Rego and US painters as diverse as Alice Neel and Henry Darger.

Marlborough is planning a survey of Rego’s work, to be held in the gallery’s new space in New York soon after it opens in September 2020. “There hasn’t been an exhibition of this kind in New York, and it’s where we have the most to gain in terms of introducing Paula to that audience,” Levai says. He notes that her collector base is international, with a dedicated following in the UK and Portugal, and pockets of collectors in the US and Hong Kong.

With so much success already behind her, one wonders if Rego is considering retirement? “I don’t ever think [about it], she responds, adding: “Retiring to do what? Watch movies? I’d like that, with ice cream.”