Remembering Lindy Dufferin, artist and entrepreneur who used her Northern Ireland home as a centre of community and cultural exchange

Lindy Dufferin was an artist, a friend of artists, a conservationist, businesswoman and chatelaine of Clandeboye, a fine Georgian house with a 2,000-acre estate, in Northern Ireland, between Bangor and Belfast. Her full name was the Marchioness of Dufferin and Ava but she painted under her maiden name, Lindy Guinness.

For all her social and entrepreneurial energy, she was happiest painting. When I stayed with her at Clandeboye, she would give over the morning to working in her studio, converted out of the old drawing room. Or she would race across the green fields of County Down and paint the lake or her beloved cows. With her herd manager, Mark Logan, she built up a prize-winning herd of pedigree Jersey and Holstein cattle that went on to make Clandeboye Estate Yoghurt—which has now sold 10 million pots, each with a picture by Lindy on the lid. As she said, “That’s how I came to be the most famous disposable artist in the world.”

Today, Clandeboye buzzes with life. In the woods, local children are taught about trees and wildlife by a forest school. Conservation Volunteers, an environmental group, set up their first branch at Clandeboye 30 years ago. The Woodland Trust operates from the house’s courtyard. There, too, every year, the Belfast pianist Barry Douglas and Lindy hosted Camerata Ireland, the All Ireland Chamber Orchestra. Lindy also hosted joint initiatives between Queen’s University Belfast and Trinity College Dublin with the Clandeboye Reading Party, a North-South joint research collaboration between the universities aiming to further “cultural awareness and understanding of issues around war, commemoration, identity, memory and history”.

She had begun painting in earnest at the age of 17 after a glamorous but fractured youth. Her father was the banker and MP Loel Guinness, a scion of the brewing family, who had fought bravely in the Battle of Britain. Lindy was born in 1941 at Prestwick, near Glasgow—her father was Group Captain of a squadron based at Prestwick Airport. Her mother was Lady Isabel Manners, the Duke of Rutland’s daughter. They divorced when Lindy was nine.

Painting was her life, her therapy and her spiritual and philosphical connection to the world Catherine Goodman, artist

Lindy Guinness’s gilded connections began young: she was taught to scuba-dive by Jacques Cousteau and to play golf by the great American golfer Ben Hogan. She retained an elegant golf swing into her late 70s, playing at the course she had set up at Clandeboye—one of the many ventures she launched after the sad death of her husband, Sheridan, the fifth and last Marquess of Dufferin and Ava, in 1988, aged only 49.

In 1958, she met Duncan Grant, the Bloomsbury Group painter, at a Bonfire Night party in Sussex, where Grant was drawing the fire. “She loved telling the story of their meeting as a ‘coming home’ and of finding her father figure,” says Catherine Goodman, the artist and co-founder of the Royal Drawing School. “Unlike anyone else up until then, he took her talent seriously and showed her how painting could be a way of life.”

Grant taught her for a decade. Among her other teachers were Oskar Kokoschka and Sir William Coldstream. She trained at the Byam Shaw School of Art, Chelsea School of Art and the Slade School, London University. Her first exhibition was in 1971 in the Harvane Gallery, London. In more than 20 subsequent exhibitions, she showed in Belfast, Londonderry, Dublin, New York, Paris and London, where Browse & Darby was her main gallery.

“She was an entirely natural painter and had an extraordinary talent,” says Goodman. “Being very aware of her multiple privileges, she always found it very hard to describe herself as a professional artist, but she was one. Painting was her life, her therapy, her companion in deafness and her spiritual and philosophical connection to the world.

“Staying with her at Clandeboye, she would get us right to the chapel door on a Sunday morning, only to say, hearing the organ playing inside, ‘Let’s skip it and go and find it in nature!’ She would then revel in the freedom of a morning spent painting by the lake. She was immensely prolific, consistently competitive and, like all good artists, forever striving for a more complete understanding of her craft.”

During lockdown at Clandeboye, Lindy produced 140 canvases for a show with Jenna Burlingham Fine Art, in Kingsclere, Hampshire. She embraced Instagram with gusto, putting up her pictures each evening and loving the responses.

“She was deeply connected through her love of the natural world to the English/Irish Romantic tradition of landscape painting,” says Goodman. “Jack Yeats, Blake, William Nicholson, Ivon Hitchens and John Craxton were her touchstones. She was always experimenting with language and medium. Confidence strangely often eluded her, but this did not constrain a life spent painting to a pulse she knew was there at the heart of nature; that offered her sanity. Often privately despairing and feeling she had lost her way, she pushed on with courage late into the night on a few beers, only to be amazed at what appeared the next morning.”

At her parties at Clandeboye or at her house in Holland Park, west London, you might bump into Barry Humphries or David Hockney, who Lindy’s late husband showed at the Kasmin Gallery—which he co-founded with John Kasmin—from 1963.

Lindy had an extraordinary gift for understanding the human character, aligned with social confidence. It meant she could get on with the great and the good, from Prince Charles to Van Morrison. But it also meant she could spot a broken reed—triggering all her powers of kindness and sympathy. I was her godson and a shy soul as a boy. She saw that and brought me out of myself. When I was 14, she asked me to order the wine at a restaurant before my confirmation—something I had never done before—but she asked in such a natural way that I did it with no self-consciousness or awkwardness. 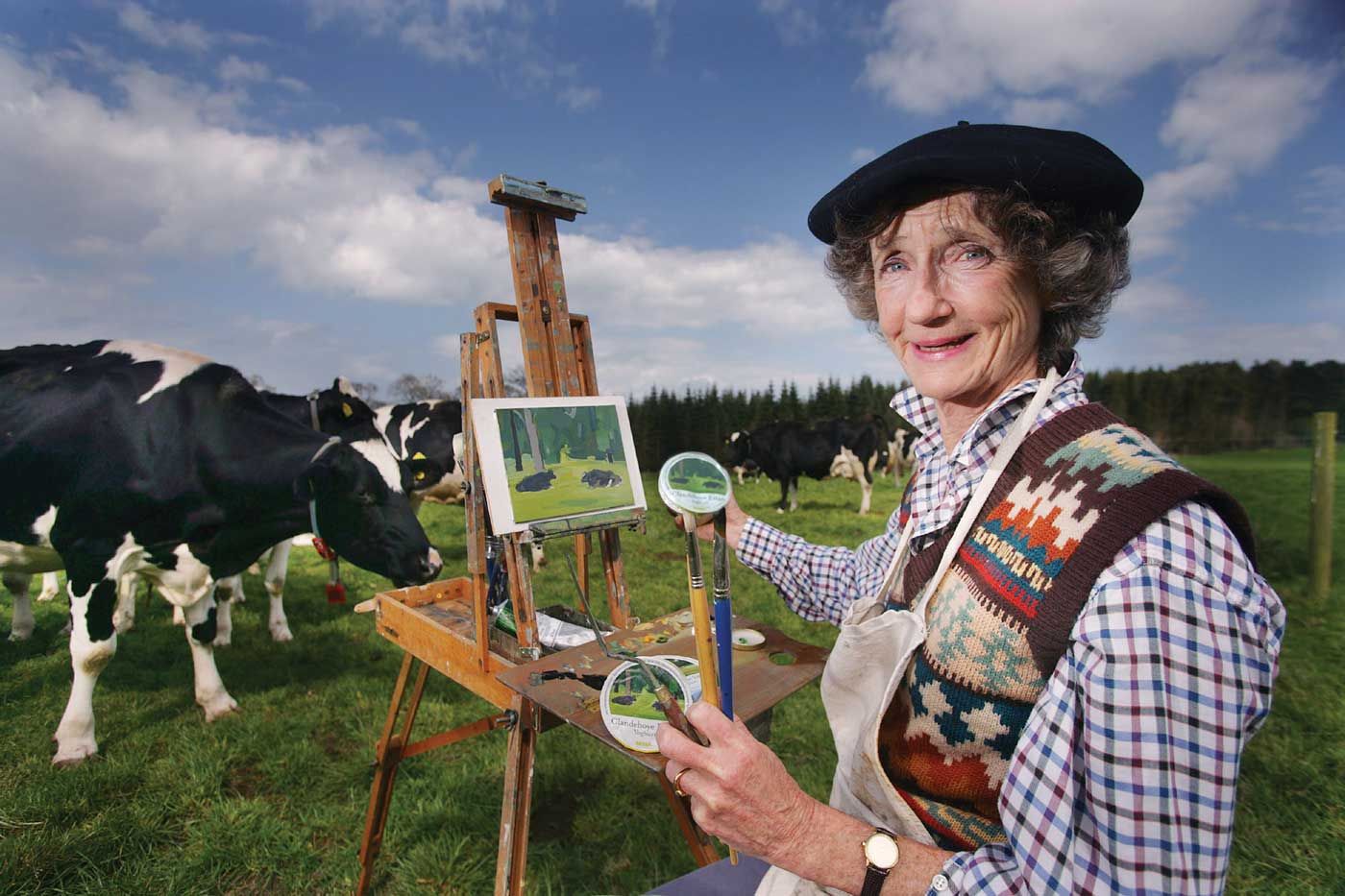 She loved painting the estate she had done so much to preserve and reinvent with Sheridan and her head gardener, Fergus Thompson. “Clandeboye’s landscape, woods, lakes and flowers were Lindy’s muses and she painted them every day,” says the Irish landscape designer Catherine FitzGerald. “Out of the studio window, she looked on to an astonishment of interwoven colour—the broad, species-rich, wildflower meadow. She began to create it—with painstaking research and a lot of deep discussion about Yellow Rattle—35 years ago.

“The view to the lake was a constant inspiration and recurs in her work again and again. She kept it beautiful and healthy, dredging the shores when it began to get clogged with too many rushes, opening up views through to further stretches of water beyond the island of trees, home to a family of swans. She planted more trees, encouraged wildlife and built bridges to connect the landscape together.

“At the end of all the discussions, you knew perfectly well she had had it all worked out beforehand and knew exactly what she was going to do—no one had come up with a better idea.”

In an interview with Camerata Ireland this year, Lindy Dufferin spoke of how she had laid out a 100-year business plan for the future of Clandeboye through the Dufferin Foundation: “In a hundred years’ time, Barry Douglas’s great-great-great grandson or daughter will be playing here, the trees will be growing and Clandeboye will exist because it’s a very, very precious and wonderful place.”

about 9 hours ago
The state of painting now