Riders on the storm 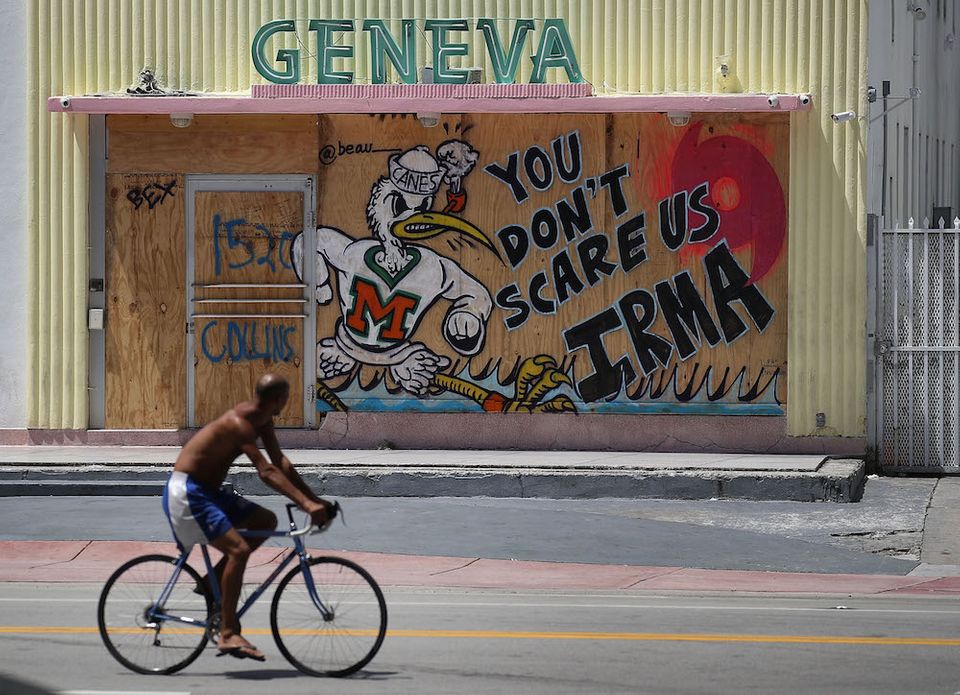 A message reading "You Don't Scare Us Irma" is written on plywood being used to cover the windows of a building as people prepare for the arrival of Hurricane Irma on September 8, 2017 in Miami Beach, Florida. Florida appears to be in the path of the Hurricane which may come ashore at category 4. Joe Raedle/Getty

When Hurricane Irma started barrelling towards Miami earlier this year, many of the area’s museums, including the Pérez Art Museum Miami (PAMM) and the Vizcaya Museum and Gardens, put their disaster plans into action. They secured their buildings and collections and closed to the public on Wednesday 6 September, four days before Irma’s landfall in western Florida. But the museums did not sit empty as the winds and water surges hit Miami, tearing down palm trees, flooding the streets and causing considerable damage. Each of the waterfront institutions had dedicated staff who braved the storm on-site to ensure the buildings and art weathered the onslaught. 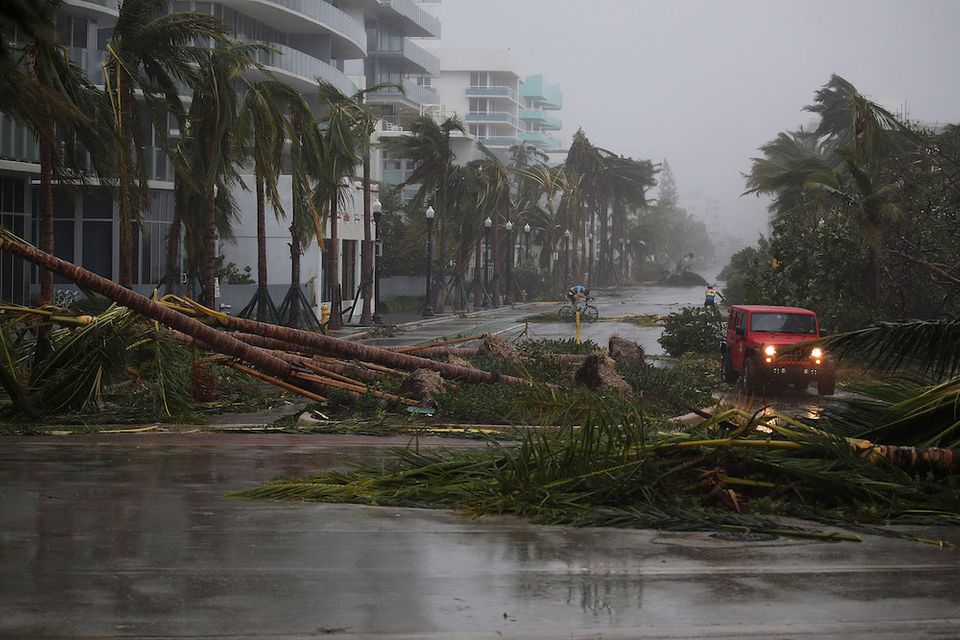 A vehicle passes downed palm trees and two cyclists attempt to ride as Hurricane Irma passed through the area on September 10, 2017 in Miami Beach, Florida. Florida is taking a direct hit by the Hurricane which made landfall in the Florida Keys as a Category 4 storm on Sunday, lashing the state with 130 mph winds as it moves up the coast. Joe Raedle/Getty Images

PAMM, located on Biscayne Bay in a building designed by Herzog & de Meuron, had a “ride-out crew” of 14 staff members who stayed in the museum during the storm, led by Mark Rosenblum, the deputy director for finance and operations, François Bonhomme, the director of security, and Jim Sharpe, the director of facilities. “Maybe in some museums, the COO of the facility delegates this [overnight work] and stays at home with the family—which my wife would probably prefer—but I’m not that kind of guy,” Rosenblum says. “If I’m going to make [staff] do things, I want to be there by their side.” 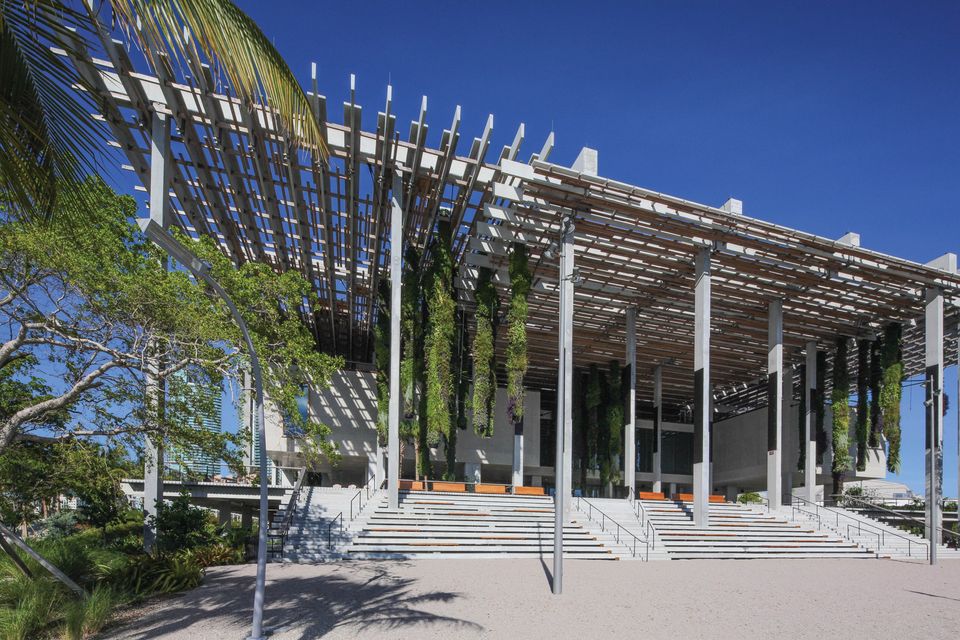 Since they might not have been able to access the museum as the storm worsened over the weekend, the team started their preparations on Friday afternoon—after Miami-Dade’s mayor Carlos A. Gimenez expanded evacuation orders to include most of downtown Miami. It was the largest effort in the coastal city’s history to remove its residents to safety, with more than 650,000 people affected. “The world around us gets the heck out of here and we’re going the wrong way,” Rosenblum says. “People driving by were probably saying, ‘What are those guys doing?’”

As soon as the category 4 hurricane’s 130mph winds and lashing rain arrived, security staff patrolled the building for leaks (there were none, fortunately) on a military-style “alpha-bravo” shift—half of the team was always on duty while the other half rested. The facilities staff made sure the operating systems kept working and that the back-up generator was ready in case the power went out (which it did not). Rosenblum played the “quarterback” role, he says, managing the team and communicating with the board, the museum’s director Franklin Sirmans and other staff. 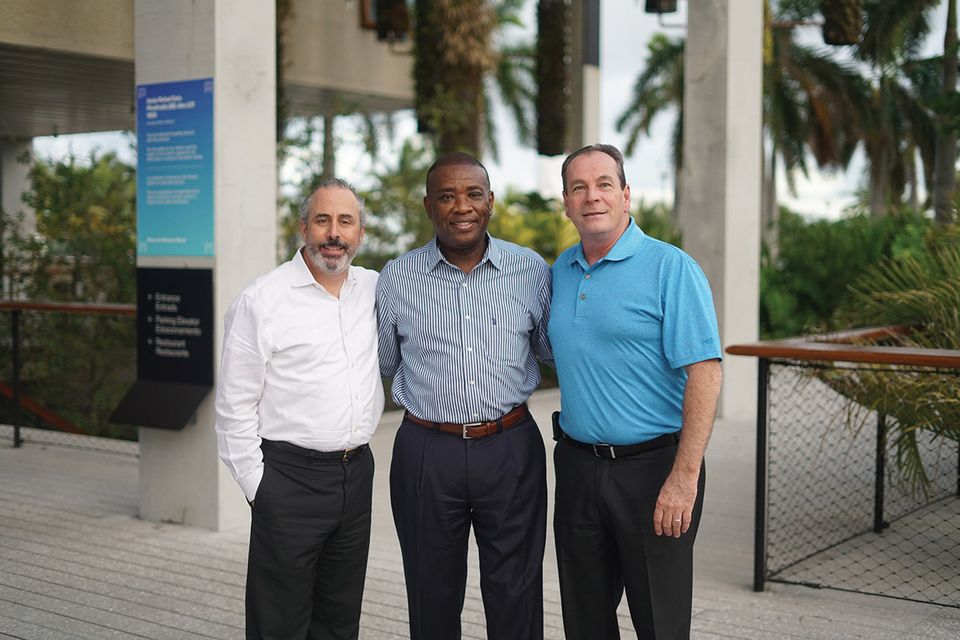 When he had downtime, Rosenblum says he enjoyed the opportunity to walk around the empty galleries and read the wall texts for each work. Most of the art remained installed in the galleries, since the building, which opened in 2013, has special hurricane-proof glass and other storm-proofing. Rosenblum says that the hardest part about staying in the museum was being away from his wife and two small sons, who sheltered at their home, about 90 minutes north of the city. The experience did, however, give him a chance to get to know his museum colleagues—or “PAMMily”, as the institution collegially calls them—better. “You’re living together 24/7 with folks you don’t hang out with every day of the week… that’s where I think the bonding really comes from,” he says. “It’s breaking bread together, storytelling, just experiencing it together.”

Although the crew brought some non-perishable snacks for the weekend—“fun stuff…you gotta have a couple of bags of Doritos, chocolate,” Rosenblum says—they also used the museum restaurant’s kitchen. But since the ventilation system was sealed, they cooked on an electric George Foreman Grill. “We were never exactly cooking lobster, but we were making nice meals,” he says.

The crew, with permission, even used some of the restaurant’s supplies. “We found some beautiful chicken breasts,” Rosenblum says, which he used to make chicken sandwiches with melted cheese and tomato. He snapped pictures for his wife to prove his culinary abilities—which might come back to haunt him, he says.

When it was time to sleep, “everyone kind of claimed their own space,” Rosenblum adds, with crew trading air mattresses that the museum keeps for such situations. The guards set up camp in the boardroom, while Bonhomme claimed the first aid room and slept on the medical bed. “It became a big camp-out,” Rosenblum says. 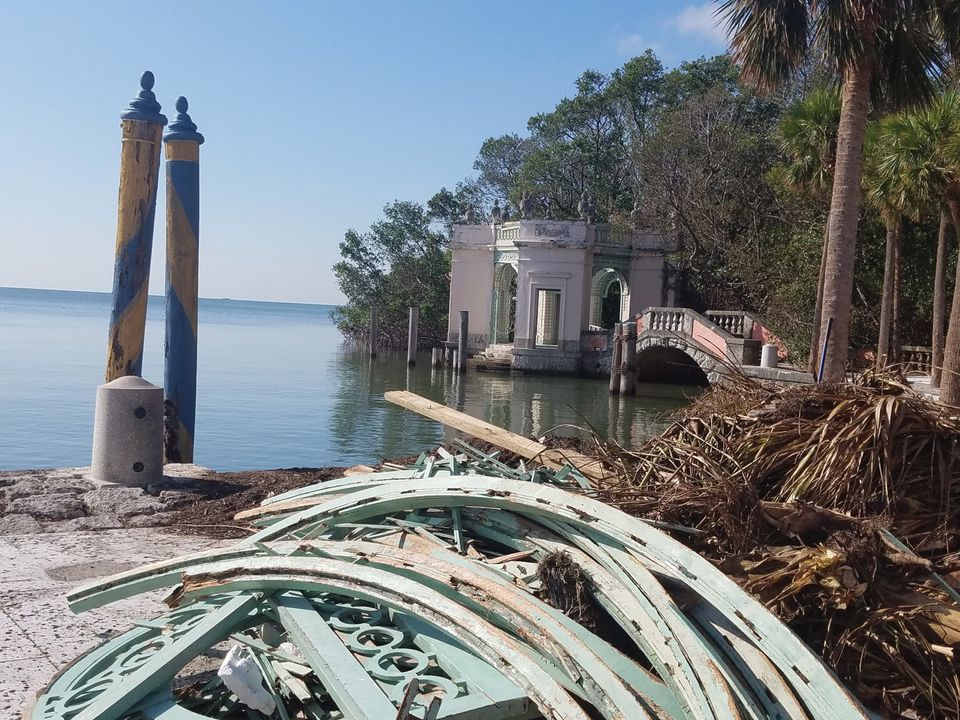 Debris from the destroyed roof of Vizcaya’s tea house gazebo, seen in the background Alejandra Serna

Lights out in Vizcaya

The situation was more chaotic at Vizcaya, a 1916 Italianate estate built as a winter home for the eccentric industrialist James Deering, located further south on the Biscayne Bay waterfront. “Once the storm surge hit and flooded our basement, we lost all power,” says Marvin Mora, the museum’s assistant security chief, who led the four-person all-volunteer “storm team” of museum staff. “I was intrigued by the notion of battling a natural disaster,” Mora says. “Beyond being my place of work, Vizcaya is an incredible property that I’ve fallen in love with and I wanted to make sure things were done right during the storm.”

When the team arrived on Friday evening, Mora came armed with two bags containing extra clothes, toiletries, spare boots—which proved useful, since his shoes soaked through during the flooding—as well as snack bars, nutritional supplements, tea and coffee. “I decided that I wasn’t going to be ‘that guy’ who wasn’t prepared for a situation he knew about days in advance,” he says. The group that runs the Vizcaya Café & Shop, A. Joy Wallace Catering, had also left them sandwiches and snacks. 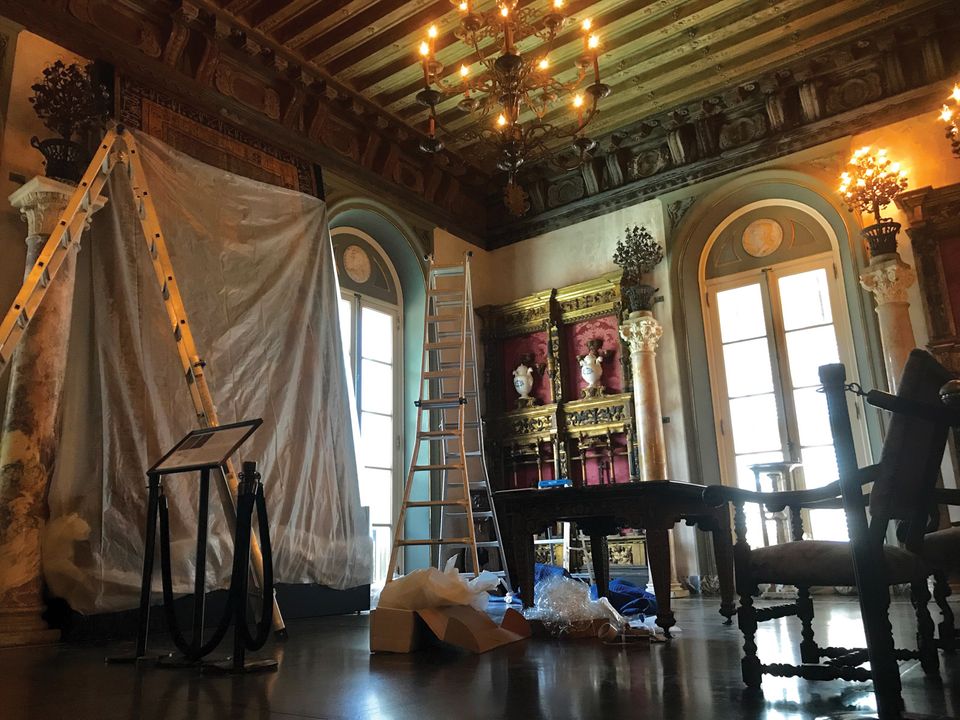 Preparations for Irma in the living room at Vizcaya Natasha Salehi

But even the best-laid plans often go awry. “We had a great theory for how sleep and work rotations would be handled,” Mora says. “Of course, nothing went according to plan and most of us got little sleep in three days. We napped here and there and, once we were all-hands-on-deck for the storm, we ate while stopping to grab additional supplies and tend to the decorated rooms within the house.”

Mora says he was not expecting the flooding in the basement, but was not completely surprised. When the storm surge hit the café basement level, he went to check the watertight doors, which were installed more than a decade ago but had never been tested before Irma.

Luckily, the doors were holding, but “I could see the water rising higher and higher through the windows and starting to flow into the café,” Mora says. “From where, I couldn’t be sure ­— in a 100-year-old house, there are nooks and crannies throughout that can let in water, especially during a storm with such force.”

Mora also says he was not expecting to lose power in the main house. Because of this, the team could not recharge the batteries for their power tools and needed to tighten screws and saw wood to board up any openings by hand. They also could not access batteries from the flooded basement for torches, so they had to work with “minimal lighting”—a “valuable experience” for future storm planning, he says. Mora expected windows to burst open, which they did, in the historic breakfast room.

And after Irma passed, there was more work to be done. “Although the storm was no longer a threat by Sunday night, we still needed to clear a path to the exit on Monday morning,” Mora explains. “With a chainsaw in hand, we began clearing a path at daybreak.” By noon, Mora’s team had made enough progress that they were able to hand over the recovery work to colleagues and head home. Volunteers, including nearby residents of Coconut Grove, came to help with the clean-up operation throughout the week after a call was put out on social media. “They just started showing up—dozens and dozens of them. It was amazing,” says Gina Wouters, the curator of Vizcaya.

“I expected the pressure to stay in constant motion and keep ahead of the storm—it did. I expected to be exhausted at the end of it all—I was,” Mora says. “I expected to make the best out of it and have some fun in the process—and we did.”