In little more than a year, the artists and scientists—and, crucially, the funds—have been gathered for a unique biennial. The journey begins this month

I have to declare an interest here. I am the chairman of the Board of Trustees of the Antarctic Biennale and I consider this the proudest title of my career, although it has had some rocky moments since I got involved last May. The art world is a hyper-sensitive, PC and suspicious place, very far from the artistic myth of bohemian lackadaisicalness. The Russians go in for inspired improvisation—let’s call it the Italian style of doing things—which crashes into the cautious Nordic way of planning everything ages in advance. We lost a keen supporter, the architect Hani Rashid, and artist Matthew Ritchie, who makes forms out of data, at the last moment because of this. And yet, in little more than a year, Alexander Ponomarev, 59, the star of this crazy event, its originator and leader, has made the Antarctic Biennale happen.

“Captain Pono” to his friends is an engineer, ex-submariner in the Soviet Navy, famous artist, representative of his country at the Venice Biennale, and the only person to have taken a submarine (small, leaky, home-made, but still a submarine) up the Grand Canal.

It costs well over a million dollars to ship dozens of artists, brains, film-makers and support staff to the Antarctic and he has found the money. Most of it comes from Eugene Kaspersky, head of one of the biggest privately owned cyber-security firms in the world (Russian, ironically, given the current paranoia over cyber-attacks). The collector and karaoke king of China, Qiao Zhibing, and his partner, Lihsin Tsai, have also pitched in.

Robin to Ponomarev’s Batman is the young curator, Nadim Samman, who has been responsible for the competition for artists under 35. For some reason, this category aroused the ire of some of the artistic advisors, who said that it was discriminatory, but since the concept “young artist” is ubiquitous in the art world, I think the storm was more about people who thought they were important not being consulted at every step of the way. The competition duly took place, with nearly 500 applicants, 15 finalists, who get an exhibition of their work in the Antarctic Pavilion in this year’s Venice Biennale, and two winners, Sho Hasegawa and Gustav Düsing, who join the expedition.

The stalwart ambassador in the US for the biennale has been John Blaffer Royall, who organised, apparently effortlessly, a whole weekend of jollies at the height of the social season in Newport, Rhode Island, last summer to make the biennale known, and persuaded Erik Owen Arneberg, chairman of the Robert Lee Blaffer Foundation, to put money into the documentary that will be made in the Antarctic. Its director is one of France’s top documentary makers, Denis Delestrac, who specialises in under-the-radar subjects, such as secrets of the shipping industry.

The ineffable and ubiquitous Nic Iljine, Franco-Germano-Russian advisor to museums such as the Guggenheim and the Centre Pompidou, has navigated the shoals of international tensions and fragile egos, encouraging, stabilising and occasionally getting quite cross.

The research vessel Akademik Sergey Vavilov sets sail from Ushuaia, at the tip of Argentina, on 17 March for a 12-day journey. It will be cold, around freezing, but not extreme. The ship will become a floating studio, conference and exhibition space. We are told that there will be scientific discussions, performances, poetry and philosophy readings, and screenings. Sea sickness permitting, there is sure to be a lot of talking. As you might expect from a nation that has “visionary” as a profession, Russians love speculating and arguing, and while the company is thoroughly international, Ponomarev will be setting the pace. Here’s a likely topic: living under extreme conditions, led by one of the nine official brains on the expedition, Barbara Imhof, who is a “space architect” and researches how to build on Mars.

When the ship makes landfall, artists will create or install works of art, or do performances. “Some people will be like pirates,” says Ponomarev. “They will rush at it with panache; others will be more like researchers. People need to taste the space of the Antarctic and we will see what happens. So much art today is social, social, social; political, political, political. This biennale must be about space.” 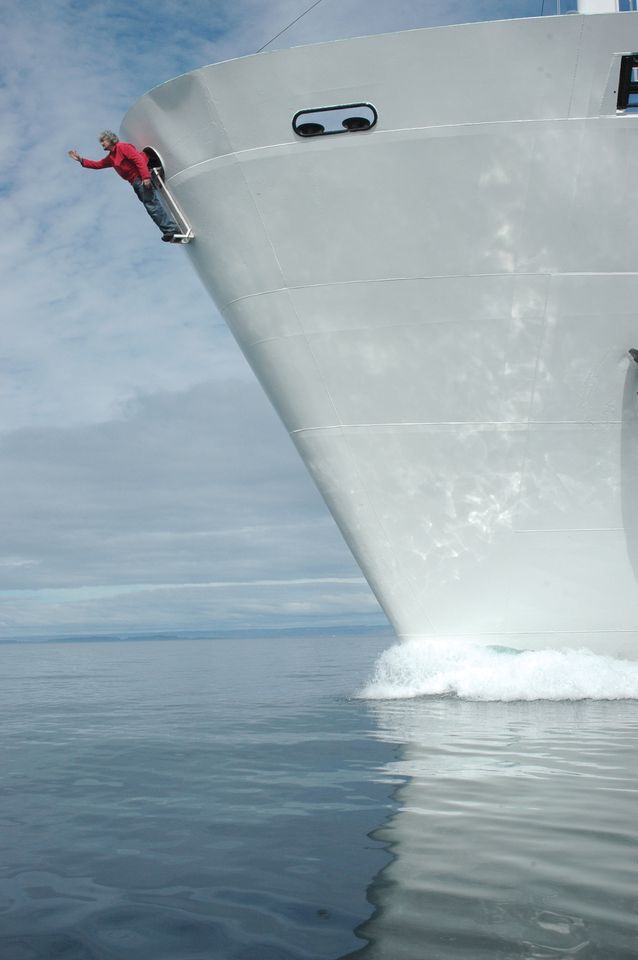 Alexander Ponomarev recreates his performance Buffin figure (2013), in which the artist played the role of a figurehead for a modern research vessel crossing the Buffin Bay

What does he think it will achieve, I ask him: “I thought up this exhibition as a process, voyage, movement, self-development. The situation in our lives and art is very structured, like lined paper or the dial of a watch,” he says. “We need to come up with new ideas; I want this biennale, without commerce, without nations, to clean us. Our biennale is about process.”

Ponomarev sees the weather as a component in the creative process. “The works can sustain harsh conditions; the weather affects installations and performances, and our weather-focused works of art are designed to interact with wind, water and ice. Severe climate makes us understand the importance of the weather and climate issues better.”

After the expedition, film footage, photographs, texts and other artefacts will be available for exhibitions that Ponomarev and the biennale organiser, Anna Shvets, are negotiating to place in museums around the world.

Ponomarev ends by quoting Albert Einstein: “The most beautiful thing we can experience is the mysterious. It is the source of all true art and science. Anyone who can no longer pause to wonder and stand wrapped in awe is a good as dead—his eyes are closed.” 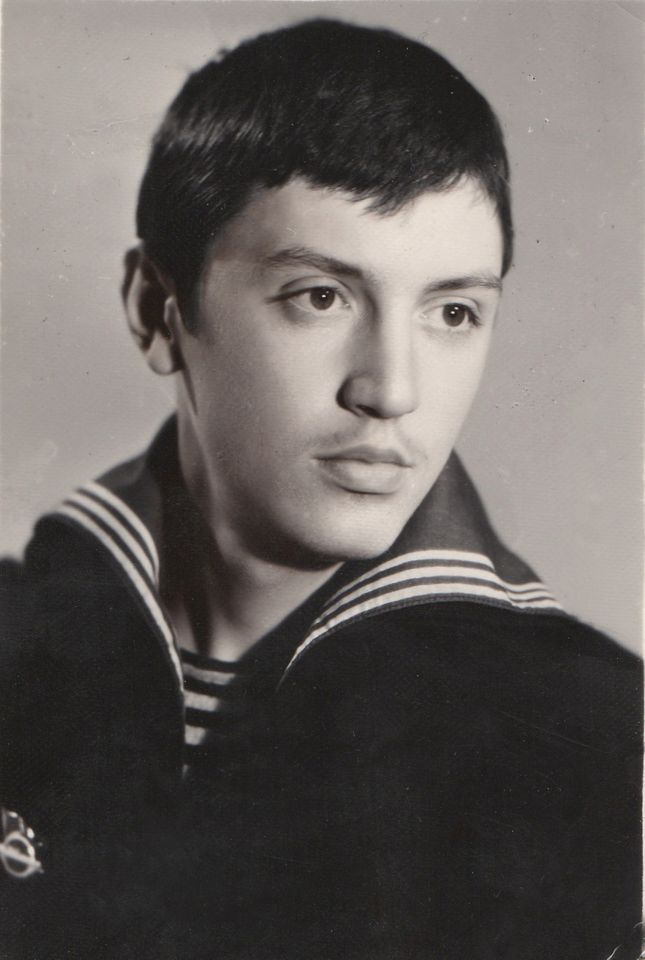 “Captain Pono”: From Submariner to Artist The Art Newspaper: Were you already an artist when you were in the Navy?

Alexander Ponomarev: The USSR had very good training in art for children and I began when I was seven, every day, and in the summer we did plein air drawing. But for me travelling was the most important thing, and the only way you could do that was in the Navy or as a pilot. But I never stopped drawing. I am like the Phoenicians, who said, one third of your life for study, one third for the sea, and one third for art.

How did you persuade the Soviet Navy to let you paint their submarines funny colours?

It was a radical gesture. I did a big action when I painted a wrecked ship; I resurrected ships. With the submarines, I did the opposite of Leonardo. He came up with the first design for one, in the Atlantic Codex, and wrote: “I won’t tell you how to take it under water because you will start killing each other.” In 1991, I took a killer submarine and turned it into a work of art and called it The Way of Leonardo.

Why did the Tretyakov put on an exhibition of your work at a time when it didn’t cover contemporary art?

You forget that the avant-garde, which it did cover, came out of engineering. Tatlin, for example, was in the Navy. The curators could make the connection.

What attracts you to the Antarctic?

I like everything to do with space: water, sky, ice, topography, navigating. All the meridians join up here and every sailor knows that ordinary navigational techniques stop working. There is no time in the Antarctic; we construct a new time. It is also the only place in the world with no nationality [because of the Antarctic Treaty of 1959, implemented 1961]. Nature, the fish and animals are sovereign here, not the humans. So, the hierarchy of life is also different.

Is the Antarctic more a physical or a metaphysical reality for you?

Oh, metaphysical. I am sailing first in my dreams, then on my ship. When I am on the ship I am very quiet and sit on deck, just looking at the horizon. Do you know, there are people who live all their lives and never see a 360-degree horizon! The Antarctic cleans your eyes and gives you a craving to come back again and again. It’s the last open, clean, white place on the planet.

What are you yourself going to do?

I want to work under the water. I am bringing a little submarine with me. But I have very little time because I have been working for the other artists and making the biennale.