By using The Art Newspaper website you agree to our use of cookies as described in this Cookie Policy.
Close notice
ePaperNewsletter
Rembrandt's Self-Portrait with Two Circles (around 1665). Courtesy of English Heritage © Getty Images

The year of Rembrandt with Simon Schama

Yet another commemoration and yet another mega-show at the Rijksmuseum. Is it possible to have too much Rembrandt? Can you have too much love, wisdom, fine weather? No, you can’t.

His was the first art that properly caught my eye; or rather his eyes caught mine and wouldn’t let go. Those eyes, one lit, the other in shadow, belonged to the late self-portrait at Kenwood House. I was, I think, just nine years old, but even then I registered the transfer of the artist’s intense observation of himself as somehow a scrutiny of my own attentiveness. It was a gaze a small boy dared not break. The effect was somehow simultaneously intimidating and invitational, as if sharing a confidence. I also noticed something that goes to the heart of the way Rembrandt makes faces and figures materially present: the looser and rougher the paint handling, the more palpable the flesh; the redness of eyelid rims, the puffball of white hair indicated by the freest brushstrokes. And, of course, the circles under the eyes seemed even then to be amplified into the hemispheres on the wall behind the painter: a mark I thought of some sort of cryptic wizardry; an impression that years of battling through discussions of whether those half-circles represent a shorthand for the terrestrial and celestial spheres, or the ultimate demonstration of free-hand drawing, has done nothing to dispel. But why, I asked my father, hadn’t he finished, of all the details—that of his own palette hand, the agent of all this wonder, a perverse refusal to picture the agency of picturing, so at odds with the perfectionist indication of an oily highlight on the tip of his big nose? “Who knows?” said dad. Who indeed? But perhaps the steadiness of the gaze and the commotion of the brush, so ostensibly at odds with each other, are a calculated demonstration of the fit between mind and hand? 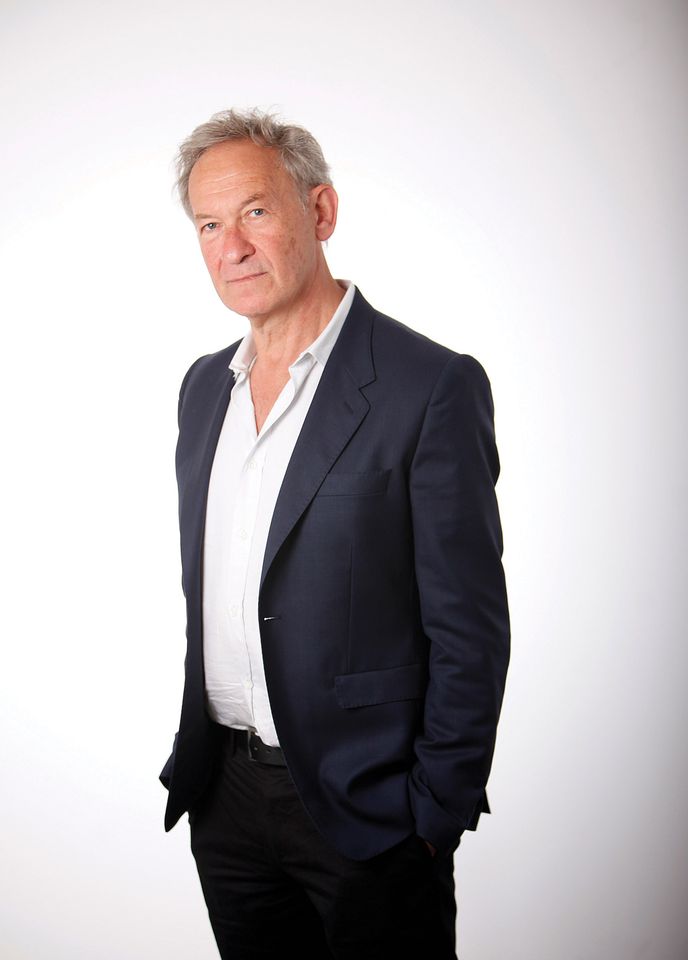 This unforced union between the work of the mind’s eye and the craft of the hand—invenio and ars—was, of course, the standard Renaissance ideal since at least Alberti’s treatise on painting. But what Rembrandt added was the drama of its translation into paint (and etched line); a drama to which he shamelessly and repeatedly drew attention. What, after all, was his prodigy piece, The Anatomy Lesson of Dr Nicolaes Tulp (1632), except a living meditation on dexterity, a treble epiphany: first, the indication of the dissected flexor muscles and tendons; second, Tulp’s demonstration of their action with his own hand; but thirdly, the painter’s dramatisation of a moment of learning amid a company of the astounded.

The force of the hand following the changing beckonings of the mind often registers itself most powerfully in the display of restless reinvention embodied in progressive states of his etchings. In defiance of conventions that disapproved of making performance, radical reworkings, as much the subject as an ostensible narrative or figure, Rembrandt documented those alterations on the plate itself, so that the struggles of the process intensified the drama of the subject matter. Finito be damned, but climax, like the apocalyptic obliterations in the last state of The Three Crosses (around 1660), was material as well as narrative.

The self-conscious exhibition of these working practices is what makes Rembrandt forever the ultimate artist’s artist. But for most of the millions who like Auguste Rodin “prostrate themselves” before his masterpieces, it is probably the emotional force of his narratives and portraits that bite deepest into their sensibility. 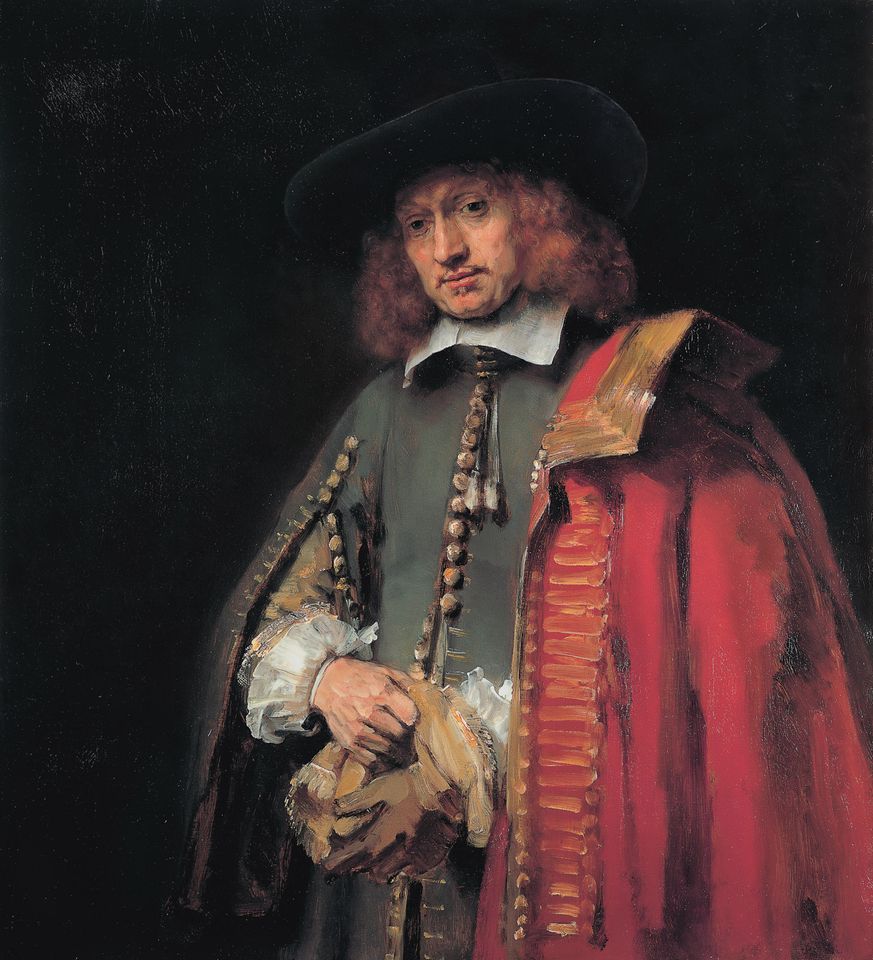 Though scholarly commentary is notoriously allergic to the faintest whiff of Romantic projection, it is nonetheless true that many of the greatest Rembrandts are indeed constructed around the play of conflicted emotion, and are often all the more powerful for being contained under pressure rather than theatrically liberated. The young master of histories, rehearsing the passions by mugging in the mirror, was a virtuoso of theatrical gesticulation and electrified torsos. But the sado-ecstatic wildness of the Blinding of Samson (1636) would give way to passions implied rather than enacted. The storm of mixed feeling swelling in Bathsheba’s perfect breast, the subdued sorrow on her face as she reads David’s summons to his bed are contained within poignant profile. The Lucretia at the Minneapolis Institute of Art abandons the stagey histrionics of the version in the National Gallery of Art in Washington, DC for drained resignation, even as her lifeblood leaches away stickily into her shift (one of the great mimetic passages of painting).

But the virtuoso of the affetti, like his near contemporary Diego Velázquez, was also a mighty thought machine, and the way in which he registered the force of ideas was to dramatise the paint surface itself. That (again like Velázquez) may, in the end, be his strongest claim to 17th-century singularity. For all the toiling efforts to make him a product of his time and culture—blurring the line between authorship and collective collaboration in the workshop, hitching Rembrandt to the taste of patrons (taste which he regularly confounded), it is the expressive freedom with which he manipulated the paint surface that ultimately defines Rembrandt’s vanguard uniqueness.

Those manipulations are most breathtaking when they are undertaken in the service of the underlying concept animating a composition. In defiance of optical conventions, which assume dark colours to recede and bright ones project, Rembrandt’s black-costumed Banning Cocq in The Night Watch (1642) advances beyond the yellow coat of his lieutenant, the action of the “march out” registered in the radical, rhymed, foreshortening of the captain’s commanding hand and Ruytenburch’s partisan. All those devices of motion and commotion are animations of the central idea of the scene: civic propulsion, the celebration of a myth of patrician energy.

In contrast, the majestic heaviness Rembrandt brought to the enthroned chieftain in The Conspiracy of Claudius Civilis (1661-62), depended on the application of brutally trowelled impasto, evidently chosen as the fitting style for a celebration of the primitive virtues of the ancient Batavian. But, as in The Night Watch, the freer and rougher the manner, the more discipline was called for to prevent the whole composition from collapsing into baffling affect. Consciously or not Rembrandt was calculating that he could somehow make the instincts of his practice match the moral of the history: the majesty of wildness. Since the great painting was removed from its appointed place in the Town Hall, that calculation apparently escaped those it was meant to flatter.

Unlike the burgomasters and regents of Amsterdam, Jan Six kept Rembrandt’s three-quarter-length portrait (Portrait of Jan Six, 1654) for the subtlety of its conceit and the bravura of its execution, mind and hand in perfectly coordinated union, the greatest portrait of that or any other century. Six’s fortune came from a family cloth-dyeing business, but he was typically removed from gross commerce to the rarefied realms of poetry and drama. The exclamatory brilliance of Six’s red cape may or may not have honoured the family dyeworks, but the cape’s colour—rare though it is in Dutch portraiture—was that of a quasi-military coat affected by the equestrian classes. Rembrandt has his patron posed between action and reflection, embodying both, just as Cicero required from good citizens. Six is posed on a notional threshold dividing street from house, the vulgarities of the outward world from the inward stirrings of the cultivated mind. And somehow this perfectly judged equipoise had to be expressed with a paint handling that was itself an instance of sprezzatura, the casual nonchalance Castiglione had identified as the hallmark of refined gentility and with which Jan Six flattered his own ambitions. Rembrandt laid on chrome yellow, wet-in-wet, with a dashing insouciance unprecedented in the conventions of portraiture (again perhaps with the exception of Velázquez); the outlandish boldness of the gesture embodied, again, in the startlingly unresolved impression of the gloved hand.

So when, all over again, you are touched by Rembrandt, it is because he means it, and does it, physically and materially. William Hazlitt, who wrote most perceptively about the painter, singled him out for an originality which was “nothing but nature and feeling working in the mind. A man (such as he) does not affect to be original: he is so because he cannot help it and often without knowing it. This extraordinary artist indeed might be said to have had a particular organ for colour. His eye seemed to come in contact with it as a feeling, to lay hold of it as a substance, rather than to contemplate it as a visual object.” 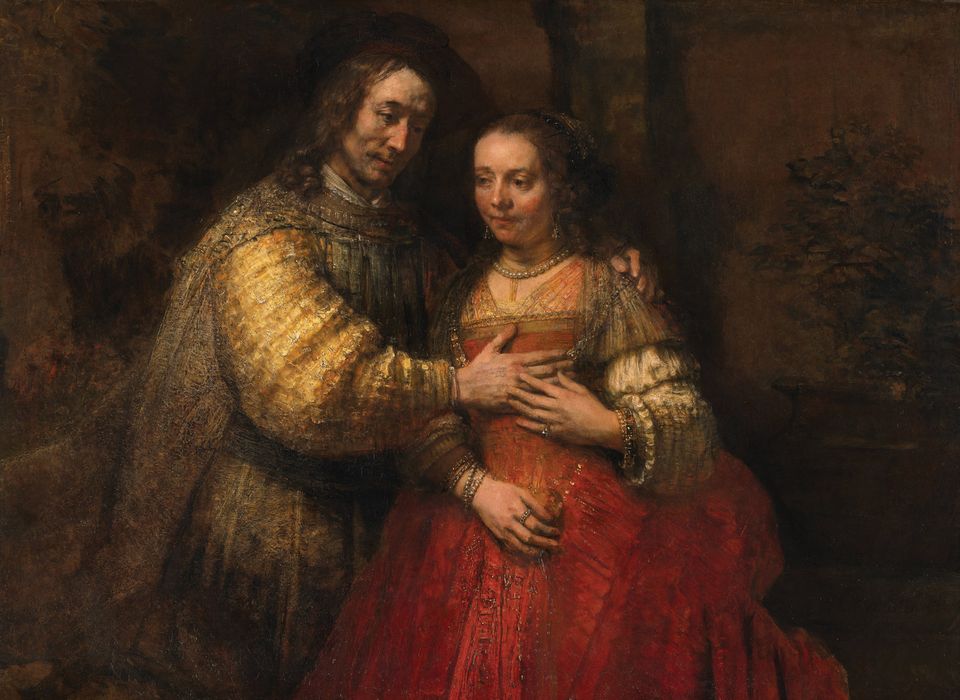 Rembrandt's The Jewish Bride (around 1667) Courtesy of the Rijksmuseum

That “laying hold”, as Hazlitt acutely put it, is evident in all the works which set Rembrandt apart and should make even those most allergic to the G-word (“Genius”), cease their flinching. It is there most luminously of course in the so-called Jewish Bride (around 1667) in which, once again, the action of the hand is the organ of emotion, in this case conjugal love, but a love expressed thickly, weightily, gravely, recklessly and experimentally in the astounding multi-layered construction laid down on the surface to register Isaac’s sleeve, the paint itself turning into a kind of textured fabric, the like of which no one would dare to imagine—much less execute—until centuries had passed and the heroic spectacle of the painted surface, all exertions kept visible as a document of creative performance, became once, again, triumphantly sovereign.