“Turner’s views of Venice are among the most enduring responses to that spectacular but uniquely fragile city,” writes Ian Warrell, the author of a new publication called Venice With Turner, outlining depictions of the Italian city by J.M.W. Turner (1775-1851). Turner only made three visits to Venice, amounting to almost four weeks in total, but his progress through the lagoon city is expertly captured in Warrell’s extensive survey. The book includes the artist’s renderings of St Mark’s Basilica, the Dorsoduro district, the Giudecca canal and the Fondamente Nove area, along with other Venetian panoramas and landmarks. The works are “as colourful and vibrant as Canaletto’s scenes; as wistful as Guardi’s skilful impressions; as mysterious as Whistler’s nocturnes; and as resonant as Monet’s late souvenirs,” Warrell writes. Below are a selection of five images reflecting Turner’s Venetian odyssey. 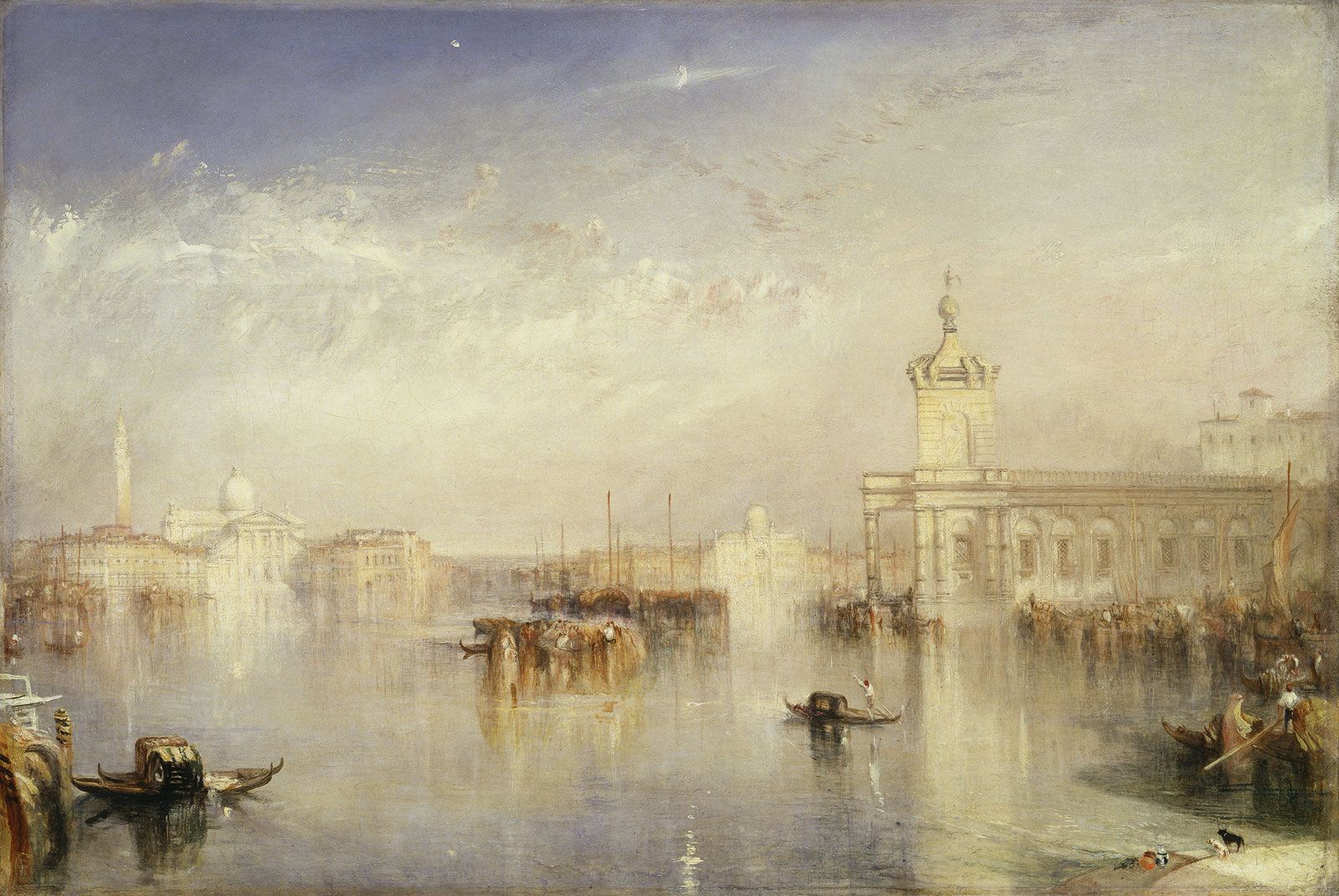 The Dogano, San Giorgio, Citella, from the Steps of the Europa (exhibited 1842) © Tate

The Dogano, San Giorgio, Citella, from the Steps of the Europa (exhibited 1842)

“Without even having to leave the steps of the Hotel Europa, Turner had one of the finest views of Venice, looking out over the wide, deep anchorage of the Bacino di San Marco [St Mark’s Basin],” Warell writes. The artist’s vista is framed on the right by the Dogana da Mar, a former sea customs house, and on the left by the majestic monastery church of San Giorgio Maggiore. The scale of the panorama across the Bacino overwhelmed Turner. “His sketchbooks frequently contain compositions that jump from page to page (and sometimes extend to further sheets) in order to encompass the great landmarks surrounding the ceremonial heart of the city,” Warrell says. 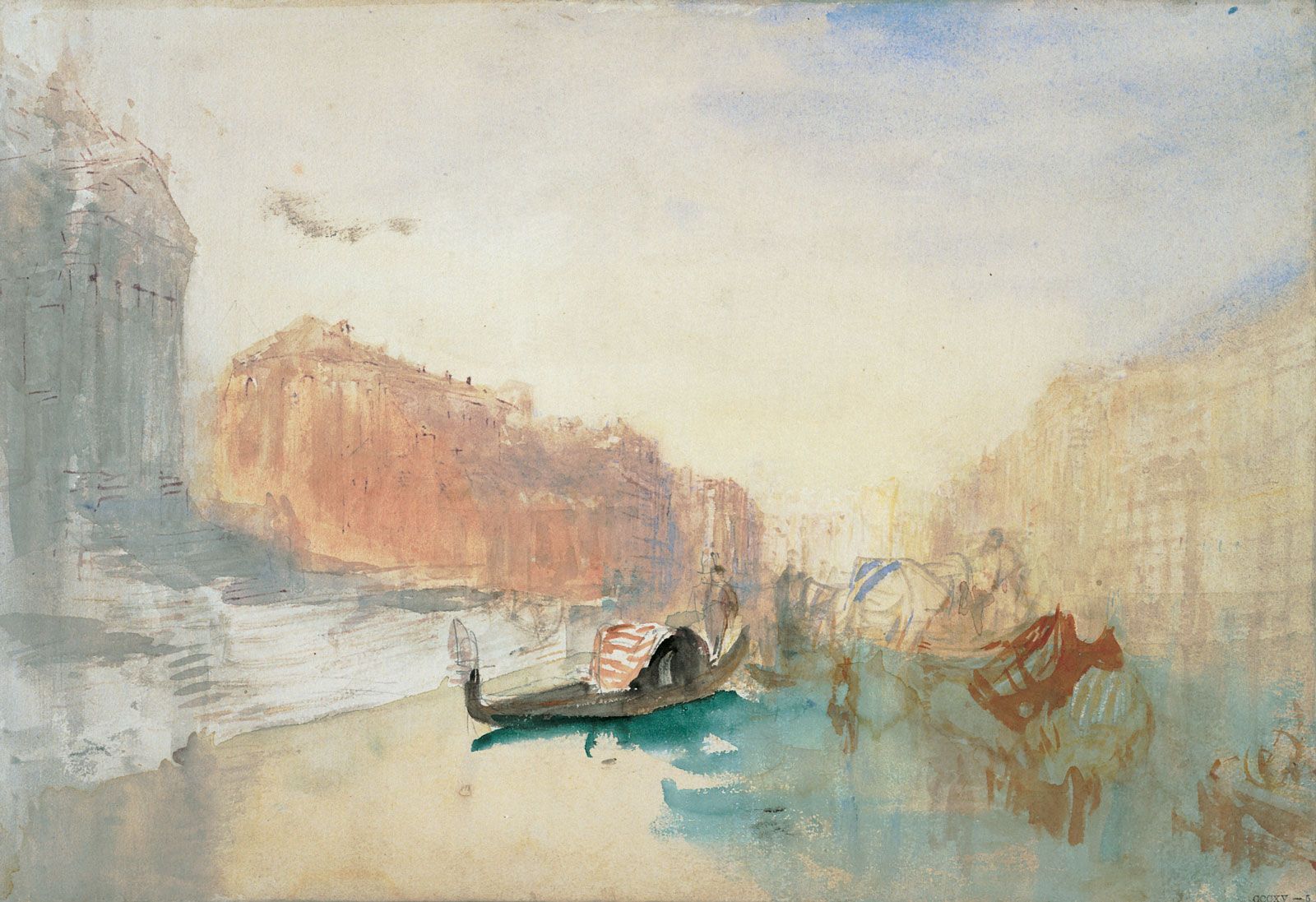 The Steps of Santa Maria della Salute, looking up the Grand Canal (1840) © Tate

The Steps of Santa Maria della Salute, looking up the Grand Canal (1840)

Turner would have seen Canaletto’s paintings of the Grand Canal, which were widely reproduced as etchings by Antonio Visentini in the early 18th century. Warrell points out that Turner subsequently painted the Grand Canal from the same viewpoints as Canaletto though both perhaps simply made use of the ferry points on the canal. The gondola near the steps stands out in this watercolour, while the Santa Maria della Salute church appears as a mirage on the left. “Turner generally cropped or blurred its full baroque extravagance, opting to represent it as a pale and ghostly presence, defined by shade as much as by either sun or moonlight,” Warrell says. 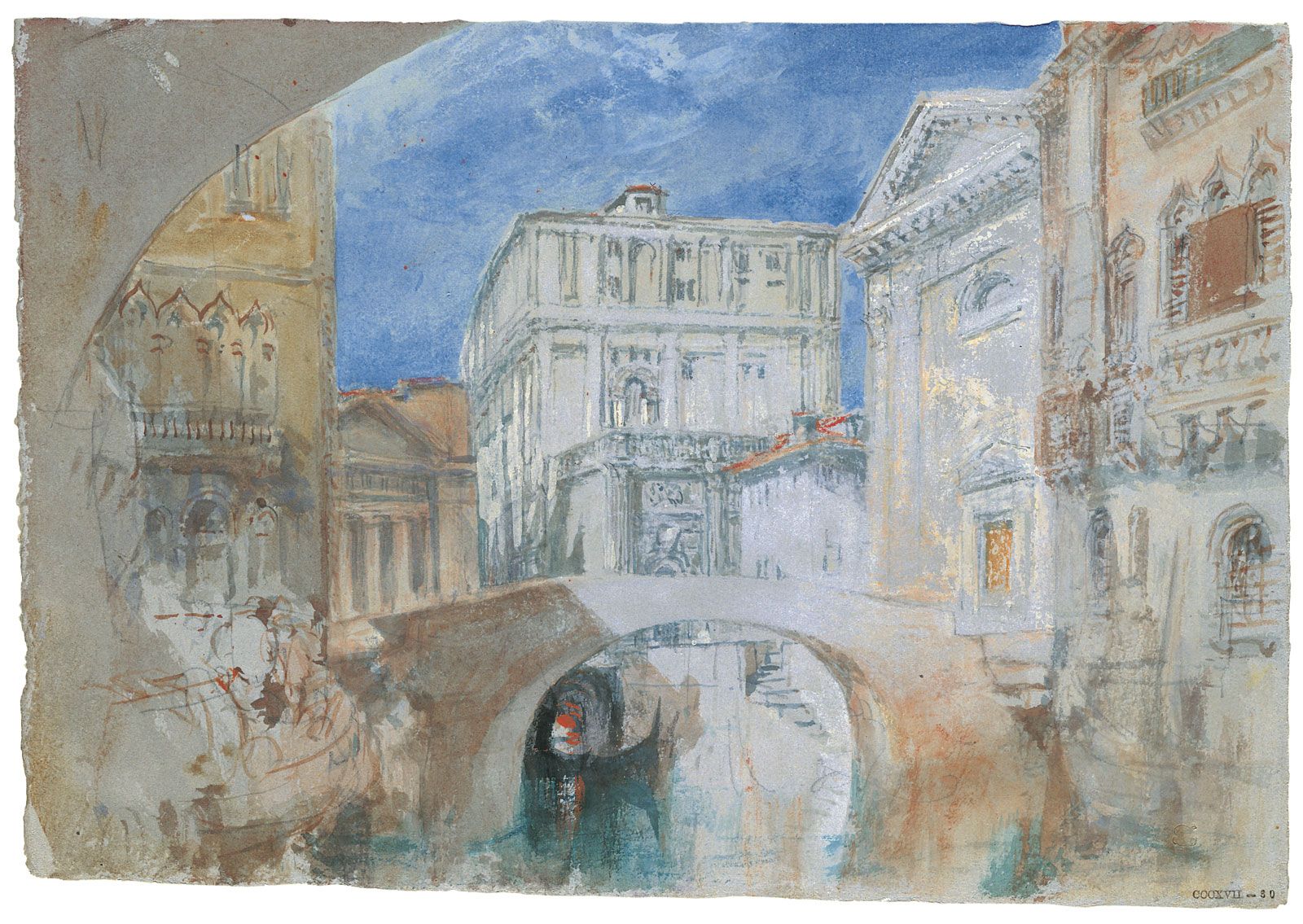 Turner put his own spin on the off-the-beaten track areas of the city as well as the more populous routes. Here, Turner uses the framing device of a bridge arch in this gouache dominated by the 16th-century Palazzo Grimani, which overlooks the Grand Canal and the smaller Rio San Luca canal off the city’s main waterway. “A sequence of studies on grey and blue paper explore this smaller canal [Rio San Luca], which Turner first encountered 20 years earlier when staying nearby at the neighbouring Albergo Leon Bianco,” Warrell writes. The discreet splashes of red paint anchor the busy work that conveys the grandeur of Venice’s architectural heritage. 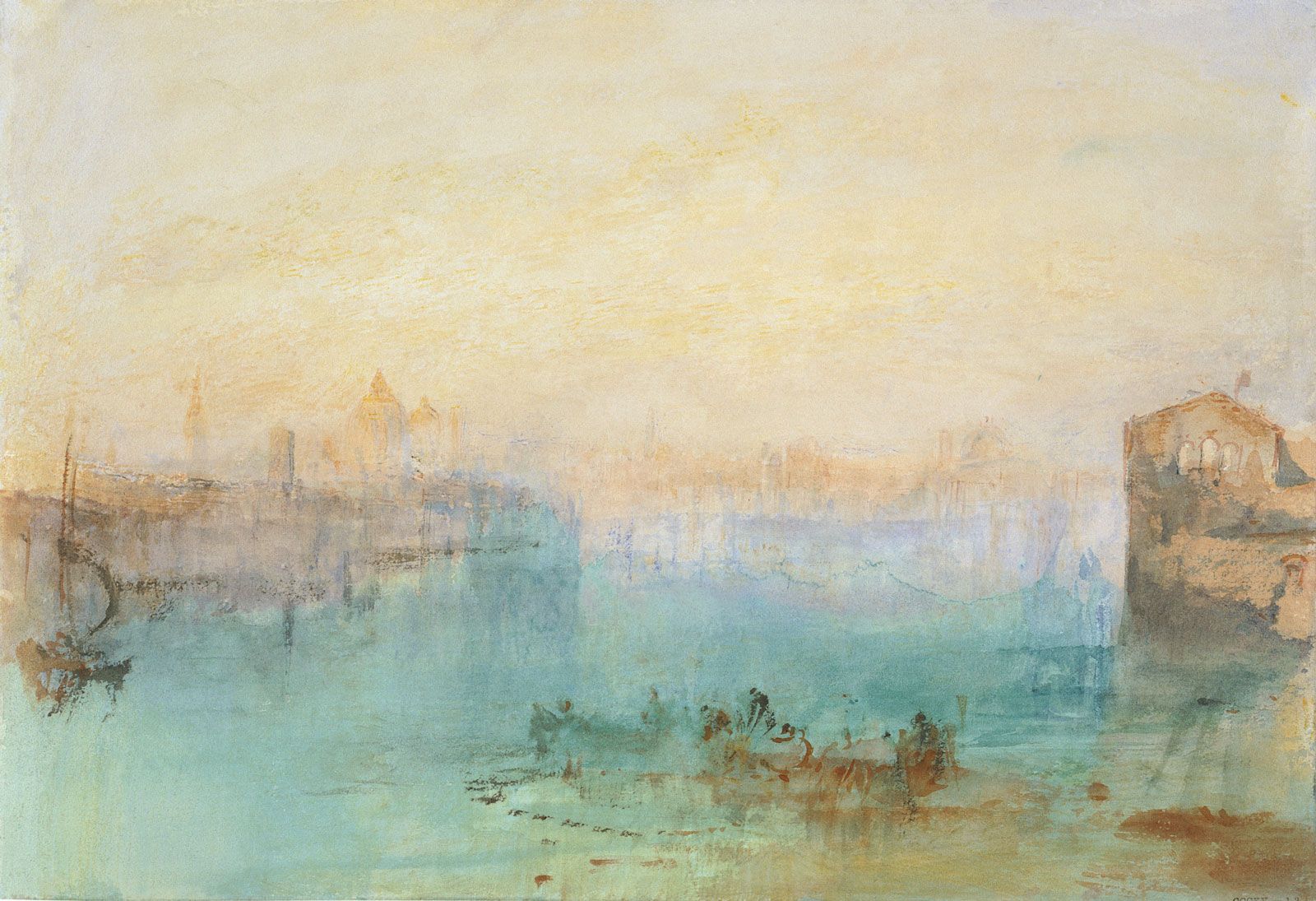 The Western End of the Giudecca Canal, from near the Convent of San Biagio e Cataldo, from the Grand Canal and Giudecca Sketchbook (1840) © Tate

The Western End of the Giudecca Canal, from near the Convent of San Biagio e Cataldo from the Grand Canal and Giudecca Sketchbook (1840)

This watercolour, showing a vessel in the foreground bathed in a blue light, captures the vast scale of the Giudecca Canal, allowing Turner to be slightly more experimental. Warrell says that “in his field notes, the western Giudecca was a place that resonated in his later work. Much of this has to do with the width and openness of the canal, which enabled him to produce expansive prospects of Venice, where the waterfronts on either side frame the natural drama of light—whether sunrise or sunset—infusing and transforming the space in between.” The wispy outline of Venetian landmarks around the perimeter, such as the campanile of San Marco, frame the atmospheric work. 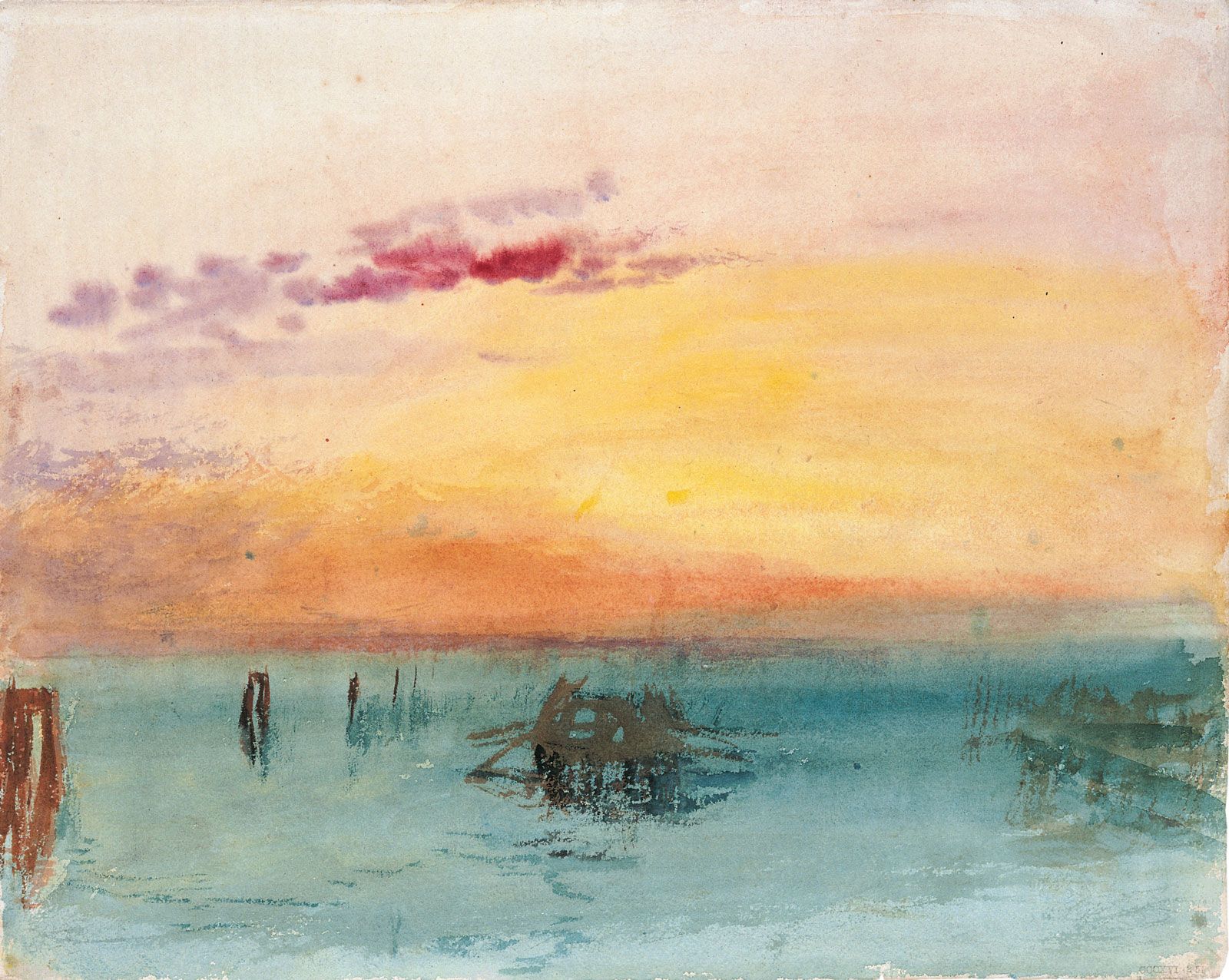 Looking across the Lagoon at Sunset (1840)

The art historian J.E. Phythian eloquently described the colour scheme of this watercolour, pointing out “the rose, gold and orange in the sky made intensely luminous by the deep purple cloudlet dashed into the still wet wash of colour”. The image is the last in the book, an appropriate coda for a collection of works that reveal and revel in the distinctive watery light of Venice. Warrell stresses that “the wide spaces of the lagoon were stimulating for Turner, liberating him from the constrictions of more contained outlooks within the city. Here sea and sky become as one and seem to extend without limits in a way that is timeless.”

• For more of the best books on Turner, see An expert’s guide to J.M.W. Turner: four must-read books on the British painter