Last month an article appeared in the New York Times about the Venetians’ anger and grief at the degradation of their town by mass tourism; the city is becoming an intolerably crowded monoculture and is ceasing to be a community as the locals abandon it for the mainland, they say.

The piece got wide coverage in the Italian media, although it contained nothing that the Venetians have not been saying for the last ten if not 20 years. The Comune (town council) of Venice has a long history of ignoring its citizens whenever they have protested at yet another downward spiral in living conditions, whether the visual impact and pollution of the vast cruise ships, the invasion of the pavements by cafés, the withdrawal of facilities such as the law courts to the mainland, the unlimited number of permits to turn habitations into B&Bs, or the total lack of an attempt to manage the millions of visitors.

Unesco’s threat to put Venice on its sites in danger list has finally stirred the Comune to take action, and in July it published a “Project for the territorial governance of tourism in Venice”.

This does not propose to reduce the number of tourists now or in the future, just manage them better. In fact, the Comune has been actively encouraging more tourists to come from China, as with its presentation at Expo 2010 Shanghai, where the delights of Venice were being offered as the jam in the doughnut of its longstanding grand plan: to get Chinese investors to turn the dying industrial port of Marghera on the mainland side of the lagoon into a vast container port for goods imported from China and Africa on what it calls the New Silk Road. Then, in July 2016, mayor Luigi Brugnaro signed a memorandum of understanding with the mayor of the major northern port of Tianjin “for the joint development of projects in the sectors of the economy, science, technology, but also culture and tourism”.

The only really innovative aspect of the Comune’s plans is that they intend to harness our smartphones to count, steer and cash in on tourists. After consulting with digital technology companies and action groups, the report outlines four main aims.

1. Find out how many tourists actually come to Venice

The only precise figures are for the visitors who book into hotels or official B&Bs because they are legally obliged to register. According to the Comune’s report, in 2016, 2.9m people stayed for an average of 2.5 days in Venice, amounting to 7.25m “presences”, the official statistics all counting in “presences”, not individuals.

Add to this complication the fact that the Venice we know and love is officially called the “historic centre”, while the “Venice” the authorities talk about includes the whole Comune, which extends well into the mainland. Official statistics, therefore, add on another 1.6m individuals each staying slightly under 1.9 days (2.9m “presences”) for the visitors staying on the mainland, a total of 10.15m presences—4.5m individuals—to “greater Venice”.

Confused? So are the media, who regularly say that Venice gets 24m visitors a year: wrong, because they confuse individuals with “presences”, and add on extra millions that are supposedly the number of daytrippers, but that figure is just a guesstimate.

There is no doubt that they are very numerous and the cause of many of the problems attributed to the tourists, but since the Comune ceased in 2012 to finance COSES, a research group that had been doing excellent work on the tourism, the city has not been counting them. This is one of the main criticisms in Icomos/Unesco’s damning official report of October 2015, for without a clear idea of who is coming, and in what numbers, there can be no forward planning. If the Chinese (to mention only the market the mayor is wooing) start to come in large numbers, at what point will the city be obliged to impose a maximum limit?

Now the Comune proposes to get mobile network operators to track the mobile phones present in Venice to find out how many people are in the city, the nationality of their SIM cards, where they go and for how long, because at present almost nothing is known about their demographics and activities. The train line operators will also be roped into giving the numbers of passengers arriving at the station.

2. Reduce crowding by spreading the tourists around

The proposal in the report most likely to cause a row is to sell tickets for entry into St Mark’s Square, the aim being to encourage visitors to go to less crowded parts of Venice, such as Cannaregio.

Another politically challenging proposal is to reduce the number of permits granted to turn residential property into hotels, flats for rent and B&Bs. The Comune already approved a proposal to block all further conversions from 1 June, but this has yet to be enacted.

New arrival points are proposed (for example, Sant’Elena, Arsenale and Fondamenta Nuove) for the large water buses arriving from the airport and elsewhere, to spread the numbers currently arriving near St Mark’s Square. Tickets for the more central ones would be more expensive.

New vaporetto routes (for example, down the Giudecca Canal) will be created to reduce crowding down the Grand Canal, and less well-known attractions in the remoter parts of Venice and the lagoon will be promoted.

Pre-booking will be encouraged through the internet of packaged services, such as museum tickets, entry to St Mark’s Square, use of WCs, vaporetto tickets and hotel bookings.

A video on the internet last month shows a couple having sex under the Rialto Bridge; diving into the canals has become commonplace (do they know that the canals double as the city’s drains?). Fines of €450 were imposed last month on some swimmers, but this was a token punishment. The daytrippers are the ones most blamed for bad behaviour, but unless Venice manages to educate visitors out of thinking it is a free amusement park, it will be difficult to impose decorum, even though the report says that more urban police will be deployed.

Ticketing to enter St Mark’s Square, assuming it was accepted, would be lucrative, because the square is to Venice what the Mona Lisa is to the Louvre: all first-time visitors want to see it. The report proposes a supplement on train tickets to Venice to cover the cost of services such as WCs and rubbish disposal. There would also be a charge for arriving in the large water buses and for all disembarking cruise-ship passengers.

Those who had hoped for acknowledgment that numbers will have to be limited at some point are bound to be disappointed, but these four categories of proposals are interconnected and could create a better system. For example, if booking ahead on the internet to buy packages of services really took off, a sliding scale of fees could help spread visitors over the whole year, bring them into town at less crowded locations, inform them about a wider range of attractions than just St Mark’s Square, and raise money for the Comune.

Venetians are waiting to see whether these objectives, which are not even fully formulated policies yet, will become reality. There remains the risk of Unesco’s censure if they do not, but that may be averted by government lobbying, which has already managed to get the decisive moment postponed from 2016 to 2017, and now to 2019. The world needs to keep watch with the Venetians. 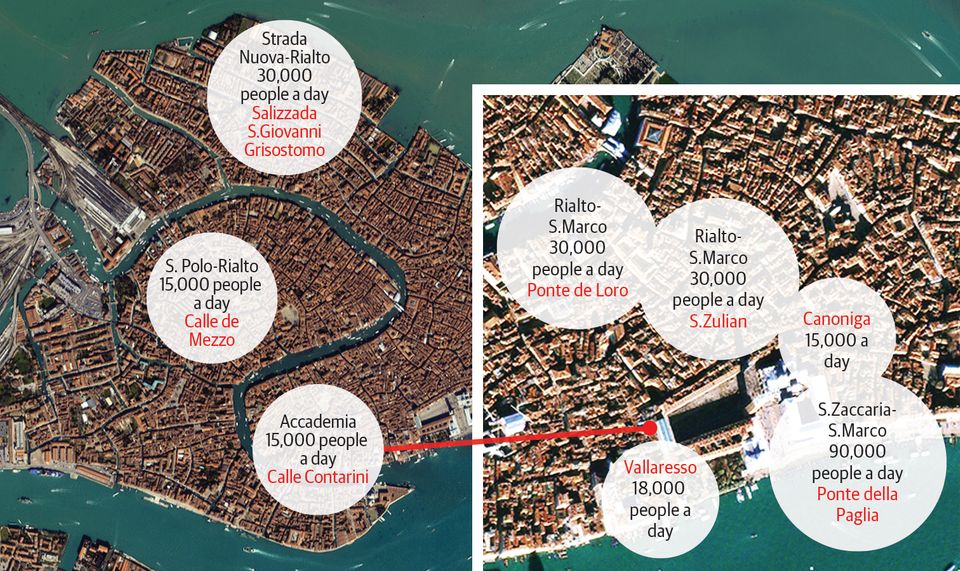 How many people can fit into St Mark’s Square?

How many people a day can walk safely down the busiest routes in Venice?

The bubbles show which they are, with the bottlenecks—narrow alleyways or small bridges—in red. The figures are the maximum number for each, after applying the space requirements (see above) and health and safety criteria for outflow. Answer: 243,000

LUMA Arles: boundary-breaking creative campus opens in the south of France with a glittering Gehry jewel in its crown

LUMA Arles: boundary-breaking creative campus opens in the south of France with a glittering Gehry jewel in its crown

about 3 hours ago
The damnation of Venice: locals are being systematically driven out by officials who are selling off sites for tourism

The damnation of Venice: locals are being systematically driven out by officials who are selling off sites for tourism