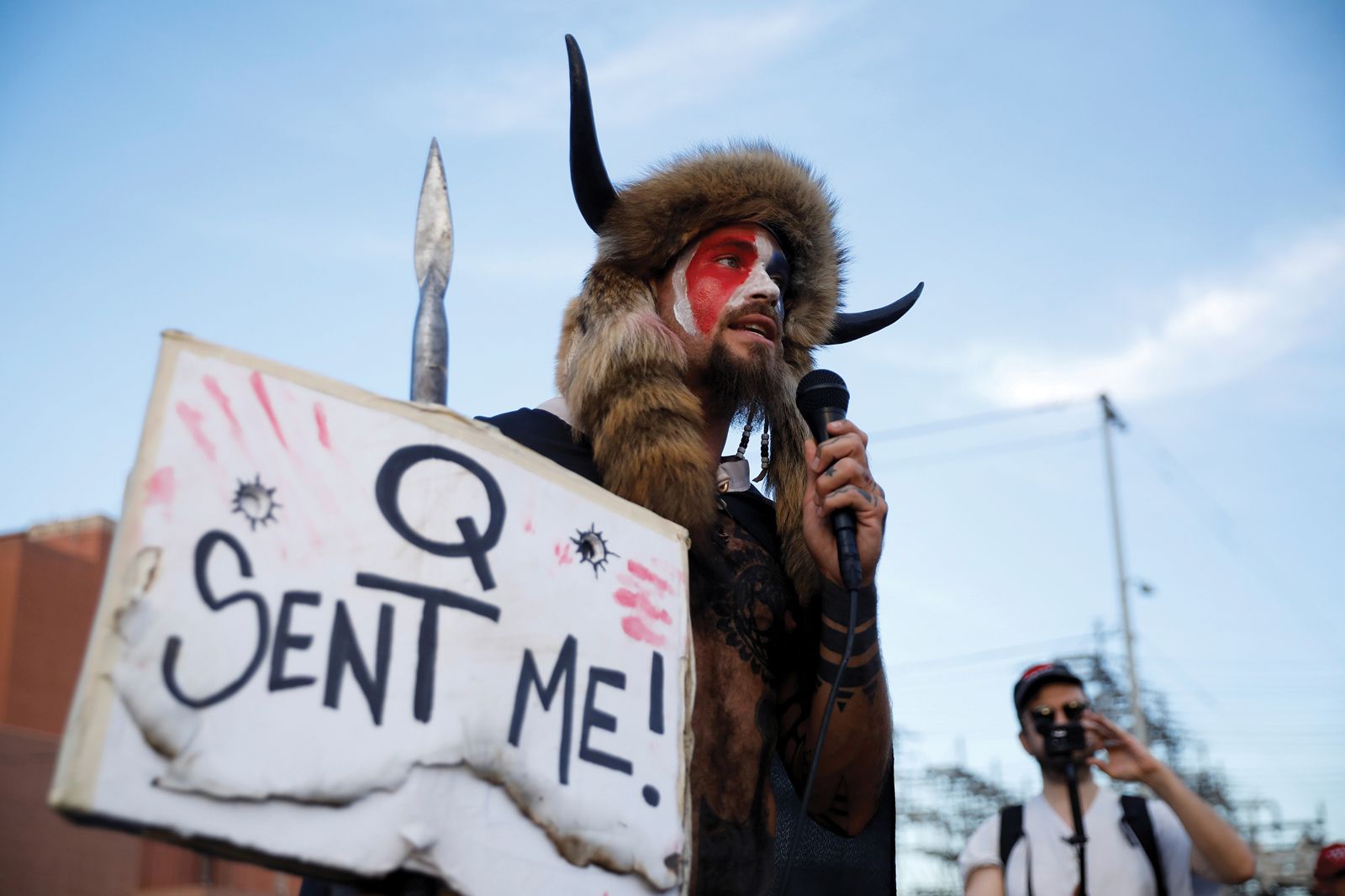 “QAnon Shaman” Jake Angeli, one of the more colourful Trump supporters who stormed the US Capitol in January © Reuters/Cheney Orr

As the US Capitol was overwhelmed by Donald Trump supporters in early January, one figure stood out: with his painted face, bare chest, fur hat and American flag-draped spear, Jake Angeli became one of the most photographed rioters of the day. He is also known as the “QAnon Shaman” and has been seen waving a “Q sent me” placard in other protests.

QAnon is America’s most dangerous conspiracy theory, and if you pull hard enough on its threads, the whole tangled mess lands, somehow, at the feet of a group of Italian artists. It might sound like a conspiracy within a conspiracy, but, as Buzzfeed first reported in 2018, chances are that QAnon, at the start at least, took inspiration from an amorphous organisation of leftist artists who, for most of the mid-1990s, called themselves Luther Blissett after the 1980s English footballer.

They used the Watford and England striker’s name as a nom de plume, perpetrating countless media hoaxes, pranks and art interventions. They started raves on trams that turned into riots, they released albums, wrote books and manifestos, they mocked, questioned and undermined the mainstream, and they grew and grew until hundreds of people around the world were calling themselves Luther Blissett.

In the process, with their media-jamming hoaxes, they helped lay the groundwork for QAnon, a conspiracy theory about a secret satanic cabal of child abusers which controls the world. During the 2016 presidential elections, it famously gave rise to the rumour that Hillary Clinton ran a paedophile ring in a pizza parlour, Comet Ping Pong. More recently, QAnon has become a mainstay of far-right protests and riots, including the US Capitol insurrection.

Among Luther Blissett’s original ranks you will find leading contemporary artists including Eva and Franco Mattes, critical theorists such as Matteo Pasquinelli, and writers like Stewart Home.

The Luther Blissett Project (LBP) was an exercise in anonymity, in group creativity, in forcing left-wing ideals into the mainstream. And it would have remained a neat quirk of 1990s Italian cultural history if the group had not also released Q, a best-selling novel translated into multiple languages and published across the world.

If they are coincidences, there’s a huge amount of them and they’re impressive Wu Ming 1, formerly of Luther Blissett

The links between QAnon and Q extend far beyond alphabetic similarities. The book follows a subversive heretic as he joins a series of revolts across 16th-century Europe. Throughout, he is pursued relentlessly by a Papist agent called Q, a figure who manipulates facts and spreads disinformation to sow seeds of doubt in society and help maintain the dominance of the church, infiltrating and sabotaging every revolt, every uprising.

Sound familiar? It should, because the Q of today’s QAnon has a similar origin story, and similar methods. QAnon’s Q is a supposed White House insider, who in October 2017 began posting farfetched but incredibly popular “insider” information from the White House on the 4chan message board. Paedophilia, the Rothschilds, an impending “storm”, QAnon has multiple targets and beliefs. 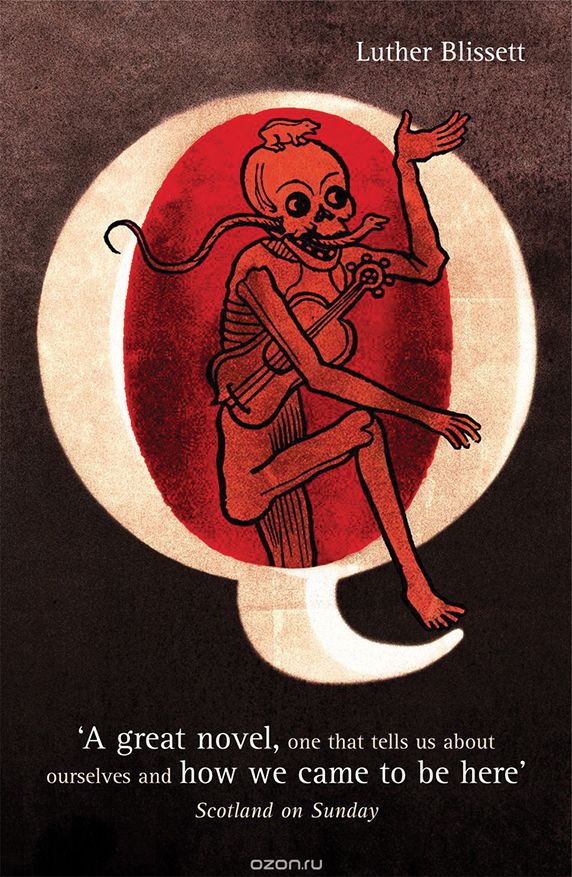 Q, the 1999 novel by the anonymous Italian art collective Luther Blissett, has notable similarities with the workings of QAnon

Not only is QAnon’s popularity constantly growing, but it is also having political influence. Two vocal QAnon supporters—Lauren Witzke and Marjorie Taylor Greene—won Republican primaries in 2020. YouTube has announced that it will be censoring QAnon-endorsing videos, and the FBI has identified QAnon as a legitimate domestic terrorist threat.

From ritual abuse to secret government insiders and media hoaxes, the links between QAnon and LBP are striking. The LBP ended in 1999, with five of the founding members (Roberto Bui, Giovanni Cattabriga, Luca Di Meo, Federico Guglielmi and Riccardo Pedrini) going on to form the Wu Ming Foundation, a writer’s collective. Wu Ming 1 (all the authors use Wu Ming as a nom de plume) thinks the similarities are too obvious to ignore: “If they are coincidences, well, there’s a huge amount of them and they’re impressive,” he says.

Beyond the names of the protagonists, the most striking connection between Q and QAnon is the LBP’s work on the Satanic Ritual Abuse (SRA) scare, a wave of moral panic that coursed through American and European society in the 1990s, accusing countless high-profile people of taking part in violent, occult practices. The LBP made SRA accusations a prime target of their work, creating and publicising extreme versions of satanic conspiracy theories, and letting them take hold in the media. Wu Ming 1 says: “We played sophisticated media hoaxes to show how dangerous SRA and the great paedophilia scare was. Some of our most effective pranks were parts of a counter-inquiry and solidarity campaign to prove the innocence of people accused of SRA in the city of Bologna.” 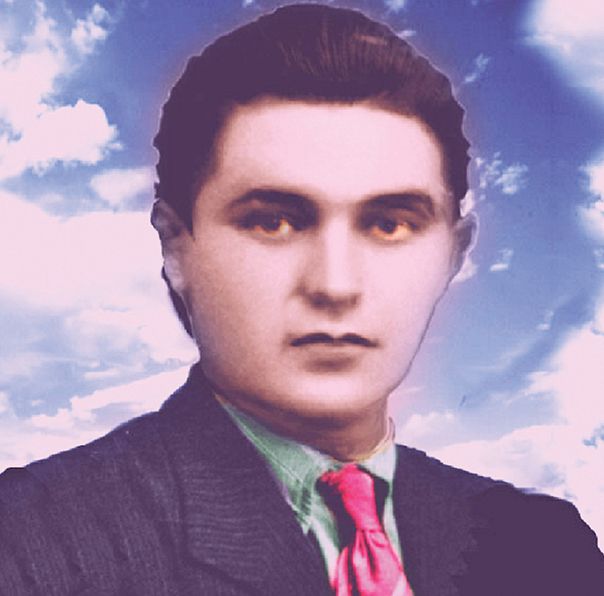 In 1997, a town called Viterbo outside of Rome became overrun with Satanists, who performed their black masses in the woods. A group of Catholic vigilantes called the Committee for the Sanctity of Morals took it upon themselves to combat these devil worshippers, documenting their rituals and passing the evidence on to the media. A film of one of the black masses even made its way onto primetime Italian television news programmes. But it was all fake: the Satanists and the vigilantes alike. The LBP had made it all up to show how ridiculous the Satanic panic was.

QAnon’s methods are similar. They spread conspiracy theories about Satanic rituals and allow them to infiltrate wider society. It has made the ridiculous notion of deep state paedophile cannibals almost mainstream.

The essential difference is that the LBP prided itself on debunking its own claims. “Our media pranks always had precise aims,” Wu Ming 1 says. “Firstly, to raise awareness of important issues and the way the media covered them. Secondly, the pranks had an ‘educational’ aspect: we always did the reverse engineering ourselves, publicly revealing their falsehood and explaining in detail what cultural automatisms and bugs in the information system we had taken advantage of. The account of how we had played the prank was more important than the prank itself.”

There is no debunking when it comes to QAnon. “Nowadays, spreading fake news and hoaxes is easier than it ever was,” Wu Ming 1 says. “One key difference is that nobody claims responsibility for them. And what’s become nearly impossible is to keep that balance, that educational aspect, that sense of communal purpose, the belief that critical thought is not the enemy of the search for wonder, and vice versa. Now you have the partisans of critical thought on one side (the debunkers) and people who’ve fallen prey to their need for wonder on the other (those who believe in absurd conspiracy theories etc.).”

Between the LBP and the novel Q, a whole playbook was laid out for QAnon to follow. But the Italian art movement was decidedly and outwardly left wing. QAnon on the other hand fosters far-right thinking, encourages the spread of fake news about Trump’s opponents and is virulently anti-semitic.

Bigoted conspiracy theories aside, the LBP, with its group-focused anonymity and media-centric pranking, was also a precursor to some of the most important political and social subcultures of today: “In retrospect, it was the perfect training ground,” Wu Ming 1 says. “It contained many of the characteristics that would define later radical movements, social upheavals and subversive practices, anticipating the likes of Anonymous, and inspiring the white-overall tactic at demonstrations across Europe in the early 2000s.”

Does Wu Ming 1 regret that the group’s work may have inspired this decade’s most destructive, far-right conspiracy theory? “How did the Beatles feel about the Manson family using lyrics from ‘Helter Skelter’? McCartney is still playing the song, even in his recent tours, which means he doesn’t feel that guilty. And he’s right. Once a novel, or a song, or any work of art is in the world out there, you can’t prevent people from citing it, quoting it or making references to it.”