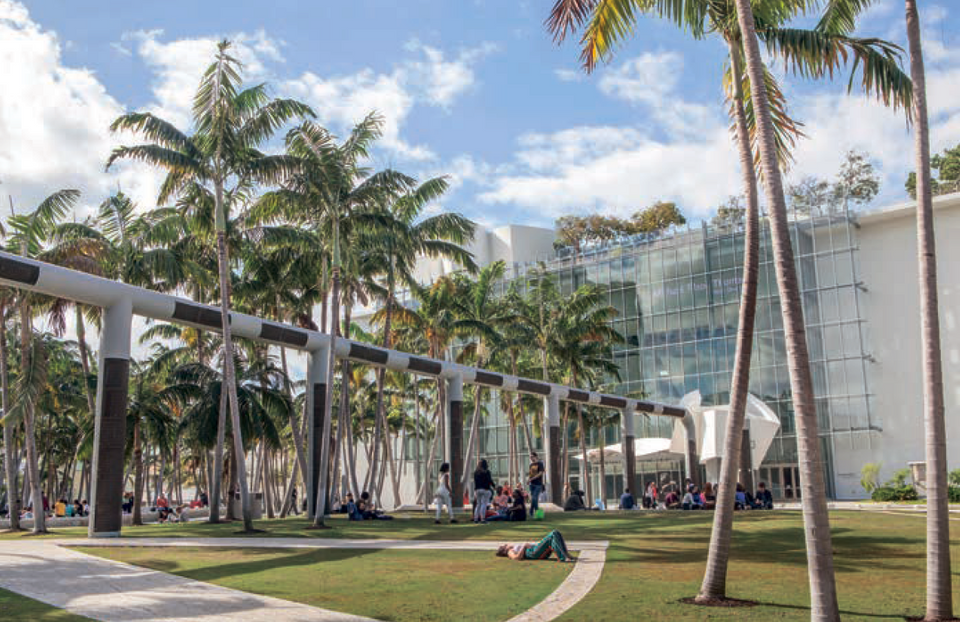 What do you hear when you dream? For the San Francisco-based sound artist Bill Fontana, it might be something like his new permanent public art work Sonic Dreamscapes, recently installed in the New World Symphony’s SoundScape Park. The audio-visual piece is the first in a series of works commissioned by the City of Miami Beach’s Art in Public Places Program to inaugurate the new convention centre. During the day, the whole park is filled with a moving concerto of sounds drawn from the Miami Beach and South Florida environment—water, rustling palms, birdsong—to be joined at night by videos projected on to the Frank Gehry-designed Symphony building’s façade. “It’s a way of creating a space made out of sound and fantasy,” Fontana says of the immersive piece. We talked to the artist ahead of the work’s unveiling.

The Art Newspaper: What is it about sound that drew you as an artist?

Bill Fontana: I grew up within walking distance of the Cleveland Orchestra. Ever since I can remember, I’ve had a fascination with music, and my dream was to become a composer. When I tried to create music, I needed to have a sort of hyper-focus to do it, and when I was in this state of mind, it affected my perception of sounds. And I started to feel that if I really focused, I could make music that was a way of experiencing the world. I was also a philosophy major and interested in Henry David Thoreau who wrote something that John Cage often quoted: “Music is continuous; only listening is intermittent.”

So I started to make my first recordings in a similar way to how a visual artist uses a camera. I remember being in a music theory class at the Cleveland Institute of Music, and being asked what my theory of composition was. They hated my answer: for me, the act of listening is the same as creating music.

I was getting more and more frustrated [in Cleveland] and, when I felt like I was reaching a dead end, I decided to go join John Cage’s Experimental Composition class at the New School in New York. And in that context, I was able to think more about these ideas, and that’s why I’m doing what I’m doing now.

I really started out as an artist 60 years ago when I saw an exhibit at New York’s Museum of Modern Art in 1968 called The Machine as Seen at the End of the Mechanical Age. It was the first time I’d seen a work by Marcel Duchamp, and in his notes he describes a “musical sculpture” as: “Sounds lasting and leaving from different places and forming a sounding sculpture that lasts.” That completely blew my mind. That’s when I started to call my work sound sculptures. 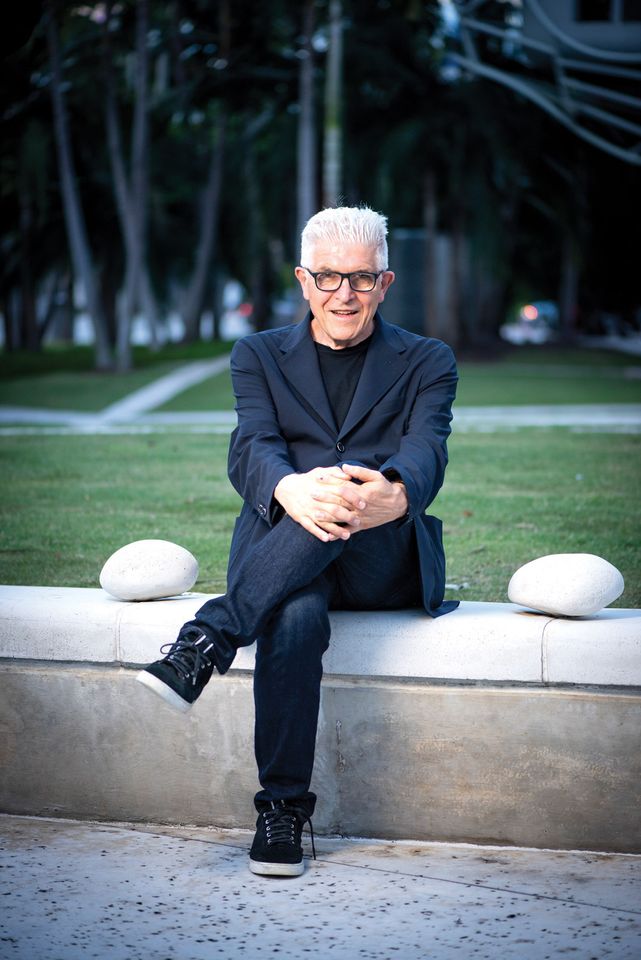 How did the project in Miami come about?

I’ve built a sculpture using sound as the material. Sound is a very evocative medium, because you’re using a musical vocabulary or a sound language that is familiar to everybody. I’m taking sounds of the sea, of different textures of water, of birds—these are not generated strands of sound. They somehow touch people’s memories in different ways.

As a sound artist, one of the most important things is the quality of the sound. I can make something, but if the loudspeakers aren’t up to it, then I’m wasting my time. So I was happy to learn that SoundScape Park has a 72-channel loudspeaker system around its perimeter that is usually used for outdoor concerts. It’s made by a company called Meyer Sound, which from my experience, is the Stradivarius of loudspeaker systems. Another unique feature is the Frank Gehry-designed building, which has a large video wall. There are a lot of days when the whole system isn’t used, and the city wanted to commission a permanent work for the park.

The technology that runs the audio system is called D-Mitri, which is a sophisticated digital audio control brain that you can use to create all kinds of amazing sound choreography. I’ve worked with this kind of system at the Pritzker Pavilion in Chicago, at Rome’s MaXXI museum and most recently for a project at the Museum of Art, Architecture and Technology in Lisbon.

I work backwards: I create the sounds first and then add the moving image

So it’s a familiar instrument for you? 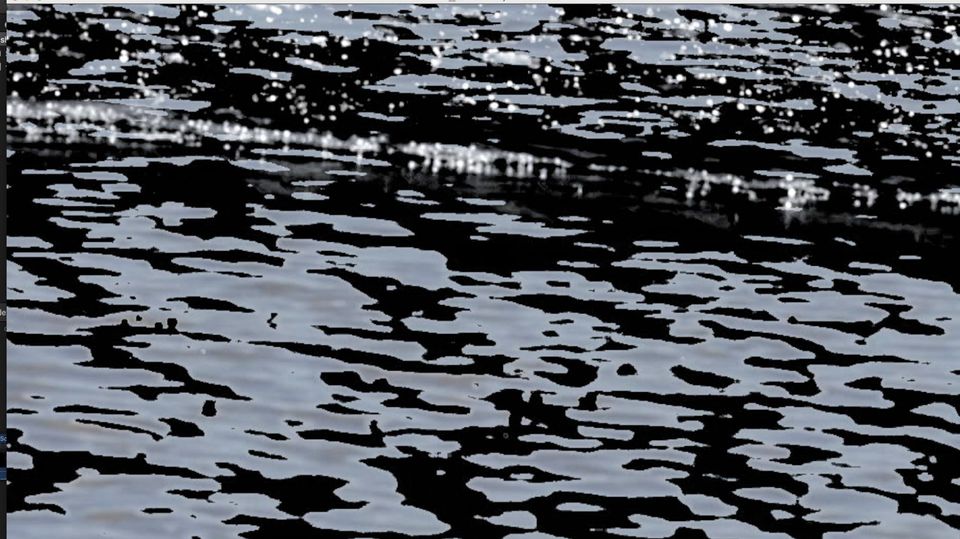 How did you find the sounds for this work?

The environmental issues of South Florida, such as the rising sea levels along the coast, are very present in people’s minds. So I did underwater recordings at the pump stations that are protecting Miami from rising sea; these sounds are amazing, very textural and melodic. Basically, you have a soundtrack of the expansive world of Florida’s seacoast, moving and spreading through the park. I then discovered that the mockingbird, which is a very interesting songbird, is the state bird of Florida. It made me think of the evolution of birdsong, and the different species that have developed it. I wanted the mockingbird to invoke that sonic history, so I played some tricks with that sound. I wanted to express the magic of it.

When I record sounds digitally, the recorders have clocks. When I put it in the mixer, I adjust the clock setting, so if you record at a high sampling rate but set your digital clock at a slow sampling rate, the recording expands in time. The resulting mix sounds like an ancient jungle; I wanted to create a sense of timelessness.

The final mix moves through 72 points in space, so it’s pretty immersive. And the way I approached the moving image matches the way I played with sound in the mix. I created some truly abstract images of moving water— I didn’t want to just have a pretty visual.

Have you ever shown your work at an art fair before?

No, no, no. I’m an art fair virgin. [Laughs.] What’s really funny for me is that this project is across the street from Art Basel in Miami Beach. I’ve been working for 50 years and have done a lot of interesting projects for museums. I was even once, for a brief time, represented by the Haunch of Venison gallery, which closed. I’m lucky that I’ve had opportunities to do these things, but I feel like a real outsider to that world. I’m curious to see what kind of interactions I’ll have afterwards.