In one of his last interviews, Christo speaks about life in lockdown and wrapping the Arc de Triomphe 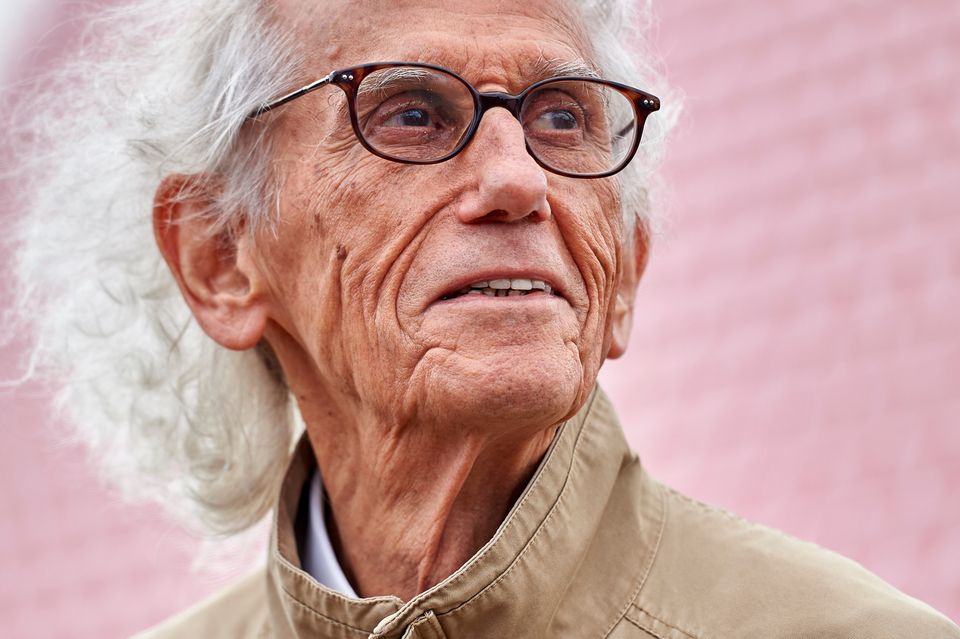 If this was his last interview, Christo was in sparkling form. "I am an artist who is totally irrational, totally irresponsible and completely free", he said cheerfully speaking by video link from his New York studio. We spoke for an hour on Monday 11 May.

As someone who grew up in Stalinist Bulgaria, Christo valued freedom perhaps more than most in the West. But the reality was that he spent his last few months—happily enough—holed up at home. Since coronavirus, he had been too frightened to go out.

Home and studio, since 1964, was a converted five-storey 19th-century industrial building in Manhattan’s SoHo. Since lockdown, he had not ventured out at all. "Nobody comes here", he said. "The invisible enemy can come at any time."

But Christo was in fine fettle, full of energy and anecdotes, gesturing with his hands, reflecting on this project and that, and looking forward to wrapping the Arc de Triomphe in Paris. The only hint of frailty was thin medical tubes looped around his ears, presumably to improve his oxygen supply. Our interview was paused briefly so they could be tightened up.

When Christo needed exercise, he went for a walk up on the roof above his studio and looked out onto the city. "The air is very clear, the sky very blue, very surreal", he said. New York at this time felt "intense"; he had never known his adopted city quite like this.  His assistant, Lorenza told me afterwards "as long as he works and draws, he’s happy!", and at that moment, there was plenty to do.

"Nobody needs my projects," declared Christo, almost gleefully. "The world can live without these projects. But I need them and my friends [do]." This seemed to be what Christo always said; his simple and endearing way of pre-empting criticism and mockery.

"I am flabbergasted", he said that he had been given permission to wrap the Arc de Triomphe. He had first imagined doing so in 1962, and still had the photomontage to prove it. He was clearly excited, talked about the importance of the site, "its incredible history", "its incredible power", "its commanding presence" on the top of a hill.

He was clearly relishing the engineering challenge, the complexity of wrapping a 50-metre-high monument. Eight different companies, French and German, will be involved in fabricating the materials and putting them up, he said. A team of rock-climbers—50 of them—will hang the fabric.

Again, his excitement was infectious. He said that he never wrapped "an inner space" like this: "the cross of the four arches" with a non-stop wind blowing through. The fabric would be "like a living person". Christo held up a small rectangle of the wrapping material; silver on one side, blue on the other. He indicated that it would shimmer in the changing light, held together with red rope.

Christo was "a bit relieved", as he put it, that the project had been delayed until September 2021. He was "a bout de souffle", breathless  to prepare and fabricate drawings to pay for the project. He had already sold nine or ten works, with a top price €1.5m.

He estimated that wrapping the Arc would not leave much change out of $14m. He now had more time to make the preparatory drawings and artwork that would pay for it. The estimated cost was "€13,14,15m"—he could not give an exact figure.

How will the money be found now, I wonder? Christo and Jeanne-Claude always retained control of a valuable archive of their work in Basel, Switzerland; always kept back pieces from each project. And this archive had provided collateral for bank loans to finance the next project when needed. Will it now do so again? Christo reeled off a list of banks—Credit Suisse, Deutsche Bank, Julius Baer, Prince of Liechtenstein—that helped in the past.

During our interview, Christo habitually talked about "we" and Jeanne-Claude, his late wife and artistic partner, as if she had just stepped out of the room for a moment.  In life, as he admitted, she was "an incredible critic, very argumentative, very clever" and a great problem-solver.

As a final question, I asked him where he—among all their works—would he rank the wrapping of the Arc de Triomphe? "I don’t like to rank", Christo said. "Of course, the Arc de Triomphe will be [at] the end of my life, if I’m still alive to see it", and he half-laughed.  Rather, he said, it should be seen as part of "a connecting chain of things in my life of 85 years".

Christo would have been 85 this month, the birthday he shared with Jeanne-Claude. They were both born on 13 June 1935—"in the same hour", as Jeanne-Claude used to say.