After the British Museum, Berlin’s Ethnological Museum, which will be housed in the Humboldt Forum, has the most Benin bronzes in Europe © Staatliche Museen zu Berlin, Ethnologisches Museum / Martin Franken

The news that Germany is laying the groundwork to return Benin bronzes in museum collections to Nigeria has raised questions about one of the first exhibitions planned at the Humboldt Forum in Berlin. Its subject is the Benin bronzes, looted by British troops in a violent attack on the royal palace in 1897.

Will they still be in Berlin? Is it appropriate to show them if so? In an interview with Der Spiegel, Bénédicte Savoy, the co-author of a report commissioned by French President Emmanuel Macron on African heritage in French museums, said she did not believe the bronzes could be displayed. “With every month, every day, it becomes less likely that the bronzes can be shown without disgracing oneself,” she was quoted as saying. “Blood sticks to the Benin bronzes.”

But the curators of the exhibition, now scheduled for early 2022, are forging ahead with their plans. “A lot of the criticism of it has been wildly fantastical because most of the people criticising it have no idea what it’s going to say,” says Jonathan Fine, the head curator at the Ethnological Museum in Berlin. “Precisely because this issue is so pressing it's important for museums to engage with it, and not just at the level of rhetoric or moving a couple of labels around.”

The timing and scope of Germany’s restitution has not yet been announced. The Foreign Ministry is negotiating with partners in Nigeria—the government of Edo State, the royal court, and the National Commission for Museums and Monuments—on an agreement it expects to finalise by the summer. 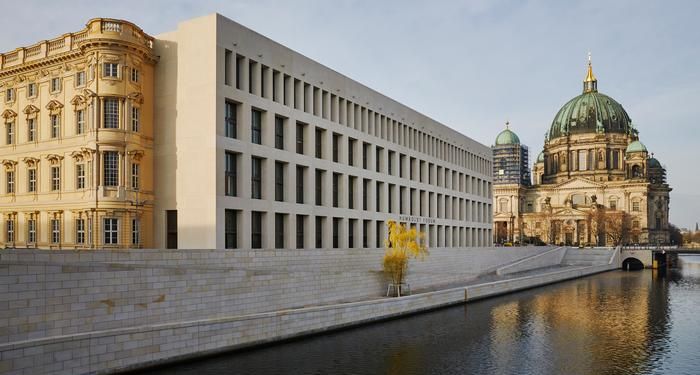 For Foreign Minister Heiko Maas, “the question of returning cultural heritage is part of an honest approach to colonial history. It’s a question of justice.” Culture Minister Monika Grütters is planning an April meeting to bring together museums and state culture ministers to define a “national strategy” on the Benin bronzes in German museum collections, which she said will “of course” include restitutions.

Berlin’s Ethnological Museum, to be housed in the Humboldt Forum, has the largest contingent of Benin bronzes in Europe after the British Museum. Fine says the provenance of around 440 of 520 objects from the kingdom of Benin in the collection can be traced back to the 1897 attack by British troops.

He says the Humboldt Forum exhibition is planned over two rooms; one focussed on the “very long, rich and incredible history of the Benin kingdom over 1,000 years.” The second will focus specifically on the 1897 attack by British troops: “the invasion, the violence, and the plunder; and how after the plunder, works of art, ritual objects and everyday objects were scattered throughout the world.”

A centrepiece of the second room will be “interviews with stakeholders from Nigeria and from European institutions talking about what the Benin bronzes are, what their loss has meant, and what should happen to them in the future,” Fine says.

Hermann Parzinger, the president of the Prussian Cultural Heritage Foundation, wrote in an article in the Frankfurter Allgemeine Zeitung on 27 March that he expects the exhibition to show around half of the Benin bronzes in the museum’s collection. “That by no means rules out later returns of the objects that will be exhibited in the Humboldt Forum,” he wrote.

The timetable for the restitution depends on the Nigerian partners and the trustees of the Prussian Cultural Heritage Foundation, the organisation that oversees Berlin’s museums, Fine says. But he does not appear concerned about how that could impact the exhibition.

“I always expected that as objects went back to Nigeria, we would approach that in different ways,” he says. “The museum made plaster casts of some of them earlier in the 20th century, and there are different ways to talk about how objects aren't always on display. The museum isn't cast in stone, but part of a process of transformation.”