Forced to flee Uganda after being outed as a lesbian in the press, Babirye's show at Stephen Friedman Gallery addresses the legacy of British colonialism

Leilah Babirye was forced to flee Uganda in 2015 after being outed as a lesbian in the press Photo by Xiao Mina. Courtesy Leilah Babirye; Stephen Friedman Gallery, London and Gordon Robichaux, New York

The Ugandan artist Leilah Babirye began carving wooden masks just over a decade ago after attending a concert with a group of LGBTQ art students in Kampala. Upon entering the venue, Babirye was surprised to observe that during the event many of her peers wore traditional West African masks to conceal their identities. “This art form suddenly took on a new meaning,” she says. “I was deeply saddened to see this was the reality we lived in.”

That reality would eventually prove life-threatening once Babirye was outed as a lesbian by a local newspaper in 2015 after collaborating with a queer activist group. Forced to flee Uganda’s severe anti-LGBTQ legislation, she was granted asylum in the US, receiving support from human rights organisations and artists including Kehinde Wiley who paid for her plane ticket. Settling in Brooklyn in 2016 she soon met the dealer Sam Gordon, the owner of Gordon Robichaux in Manhattan. She has since had two solo shows at the gallery of her ceramic, wood and found object sculptures of semi-abstracted masks, busts and figures that bear weathered surfaces and draw from a range of African and European artistic traditions.

The largest of these to date, a totemic 13-ft-tall blue ceramic work, will debut at her first European solo show at Stephen Friedman Gallery during London Gallery Weekend. Based around the royal families of Uganda, most of the show's sculptures are named after various queen mothers who historically held dominant positions in society. Somewhat uniquely, Babirye says, Uganda’s monarchical clan system required a king to be part of his mother’s clan, while forbidding him from choosing a wife from his own, meaning rulership is passed around groups, promoting "harmony and respect".

Donning gender-bending beards and ornaments typically associated with trans femme groups, the works are resolutely queer and celebrate kinship among the kuchu community, a “secret Lugandan word”, Babirye says, that LGBTQ people use to refer to one another. 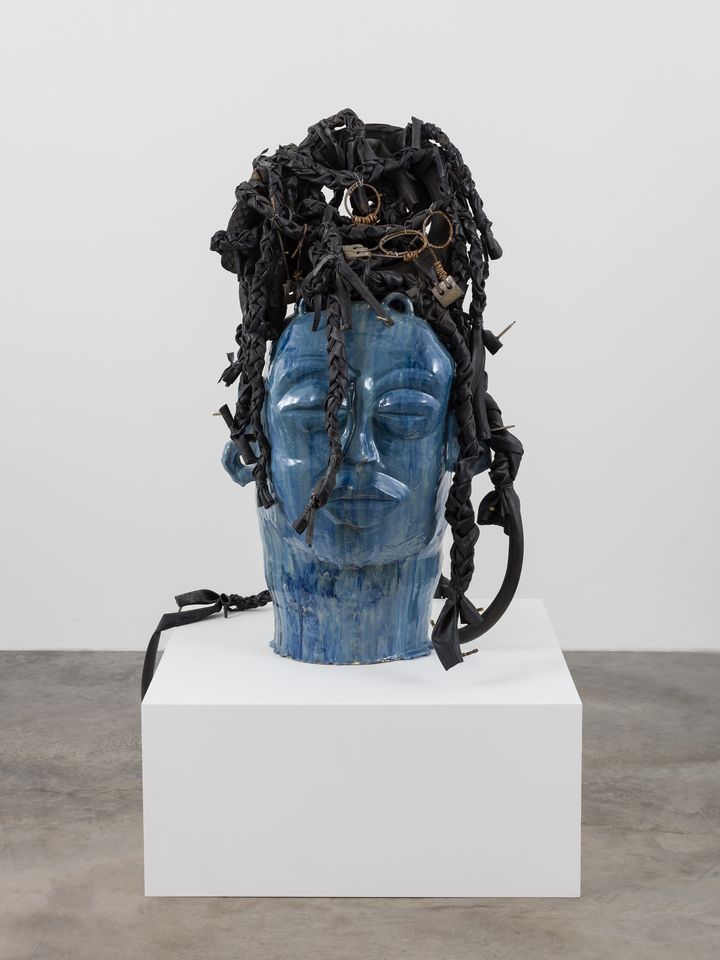 Other sculptures, including one named after the late 19th-century King Mwanga II of Buganda who openly married men and kept harems of page boys, further exemplify the tolerant attitudes towards non-heterosexual relationships held across parts of Africa prior to European colonisation. When Uganda became a protectorate of the British Empire in 1894, its settlers refused to acknowledge the elevated role held by Black women, while also establishing rigid and harmful categories for defining sexuality. For Babirye, the unveiling of these queer African royals in the capital of the former British Empire is a chance to subvert existing power structures. In doing so, she revisits a history in which people like her were accepted, rather than persecuted.

Much of the work is composed from debris that Babirye scavenges from the streets of New York, such as bicycle tires that she braids into hair, or discarded chains and tin cans that she welds and hammers into earrings. Beyond giving the work a rough, industrial materiality, the choice of repurposing waste has a deeper symbolic resonance. In Luganda, a common pejorative slang for gay people is ebisiyaga (trash). 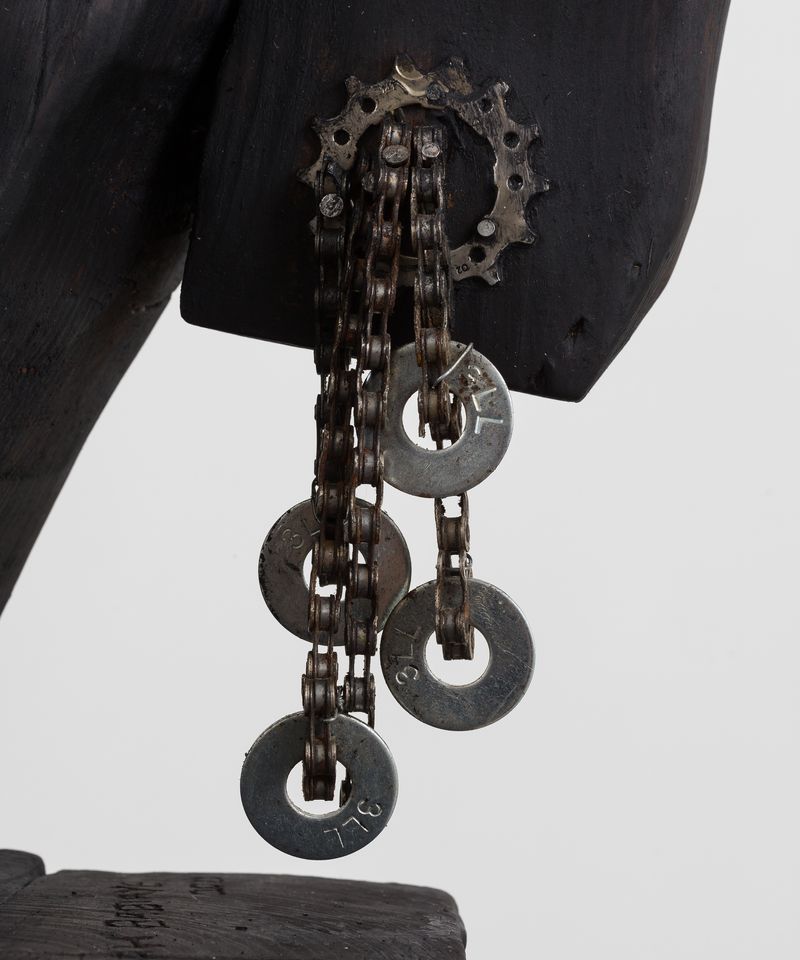 The wooden sculptures in the London show are typically burned with a blowtorch that chars and blisters the surface, a technique that calls back to the artist’s days studying at Makerere University in Kampala. “When I first began making art that addressed my sexuality, my professors would dismiss my work telling me it was worthless and that made me so frustrated. So I began burning my art to destroy it. But in the process it began to look beautiful, like it was reborn.” To this day, Babirye’s codename in the Ugandan gay community is “Burns”. "If someone calls me Burns, it means they truly know who I am. It means they are my real family."

But whether she has found this sense of kinship in the US is less certain. “The truth is I come from a very different place and the queer culture here is foreign to me. We do things differently back home, things aren’t so fast...” Babirye says that she has tried to maintain long distance girlfriends or date in Ugandan expatriate communities, but inevitably, the vast majority of lesbians she meets are still closeted. Her work too, she says, is more readily understood by Western audiences who are more receptive to the “ugliness” and "roughness" of these genderqueer figures.

The sense of dissonance that comes from being exiled from one's home and caught between cultures might explain why Babirye creates groups of statues that resemble a large extended queer family. “As an artist, I try to create my own community and right now, clay is my best friend,” she says.

Painting too affords her a similar sense of comfort, and shown at Stephen Friedman are works on paper depicting faces of "visibly queer people" that she has seen in public places in Kampala such as railway stations. Much like her sculptures, which she builds up gradually with no sketches, Babirye says that she tries to reimagine these people with no photographic references, allowing their spirits "to speak through her, and in the process befriending them".

More recently, Babirye has been focusing her attention on African queer-rights advocacy, using her growing public platform to pressure Ugandan politicians to overturn the country's draconian laws against homosexuality. She mentions that while comments on her social media posts are often vitriolic, she has also received an overwhelming amount of positive messages from LGBTQ Ugandans and from the wider queer community, who celebrate the progress that is being made.

"In my last body of work I used chains and locks because I was representing how trapped I once felt. Now I have started to use bicycle tyres because I'm thinking about moving forward, about progress" Babirye says. "I don't want these works to just dwell on the pain of my community. I want them to elevate us as royalty—a testament to our beauty, of what we can offer to the table."