The US pioneer of digital art discusses her passion for cutting-edge biology and its influence on her new multimedia exhibition, Anti-Bodies

Few artists have pioneered digital and virtual technologies and explored their societal implications as deeply as Lynn Hershman Leeson. Based in San Francisco, she has worked across photography, video, film, performance and various digital formats. She made the first laserdisc work in 1984—Lorna, an interactive piece—and early contributions to internet art. As long ago as 1995 she was working with artificial intelligence technologies. Perhaps her best-known work was a “private performance” involving her creation in minute detail of Roberta Breitmore, a woman with her own personality traits who, over five years, developed a real, documented existence. Made in 1973-78, it foreshadowed 21st-century identity-themed social media works, such as those by Amalia Ulman on Instagram.

For her show at Haus der Elektronischen Künste in Basel (until 5 August), Hershman Leeson presents her most ambitious work yet relating to her interest in biotechnologies. The exhibition, Anti-Bodies, includes the eight-room installation The Infinity Engine (2014), which resembles a laboratory. Viewers don a lab coat “so the visitor becomes the lab investigator as they go through these various rooms”, she says, which explore everything from bioprinting, ethics and genetic modification to DNA. Among the imagery is a projected photograph which evokes Michelangelo’s The Creation of Adam (1508-12), only in this image, the hands clasp syringes. In the last room, which is locked in reference to Duchamp’s final masterpiece Étant donnés (1946-66), the visitor sees newly created DNA and antibodies in mirrored boxes. “I see that as the simmering essence, so it becomes the haiku of the whole process,” Hershman Leeson says. She is also showing two works as part of the Art Basel film programme and is participating in a talk on Friday. 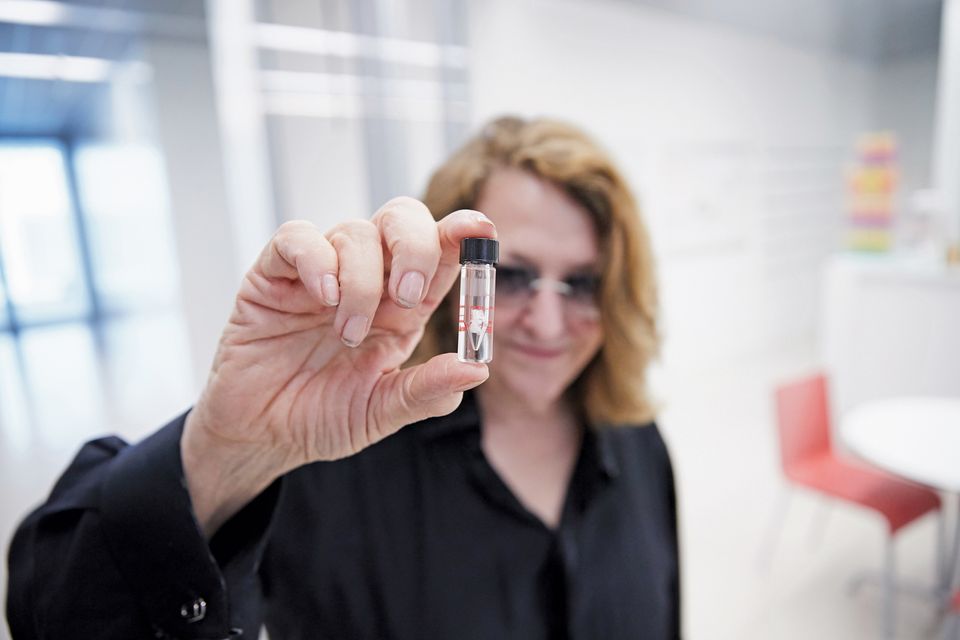 The Art Newspaper: You studied biology—how much of what you’re doing now is a natural extension of the language you were learning as a scientist?

Lynn Hershman Leeson: I think I’ve always been an artist, since I was maybe two years old; it was the language that I knew, that I could communicate, though not to many people. But my mother was a biologist and my family are all scientists—my daughter is a scientist, my brother is a scientist. So, to me, science is magic, and of course it has changed enormously, particularly in the past 15 years, so it’s like a completely new language. But I think there’s been a fascination for me in what’s happening to our species and particularly since CRISPR [Clustered Regularly Interspaced Short Palindromic Repeats, a bacterial defence system at the heart of a form of genome editing technology] and since the genome was programmed, and the choices that we have now, it seemed like this was one of the more important elements of our human condition, and really the condition of all living things. So that’s what interested me in it. But I do think it helped me that I could talk to scientists, because I think they didn’t expect me to understand what they were saying and then when I did, the conversation deepened.

Yes, and these are the people who invented and developed CRISPR, who invented the first bioprinting programme, who are the head of the genetics programme, say, at Oxford, or the woman who got the Nobel prize, Elizabeth Blackburn, for developing the telomere. Each one has contributed enormously to the field. So therefore, I was very fortunate that I got to talk to them and really began to understand more deeply what’s going on. Elizabeth Blackburn was maybe the second person I spoke with and the reason she would talk to me was because she saw my film Conceiving Ada [1997, in Thursday’s film programme], which was about Ada Lovelace [the 19th-century mathematician and computer algorithm pioneer] and she identified with the character. Because she had watched the film, we were able to have this conversation, and it opened a lot of questions for me. 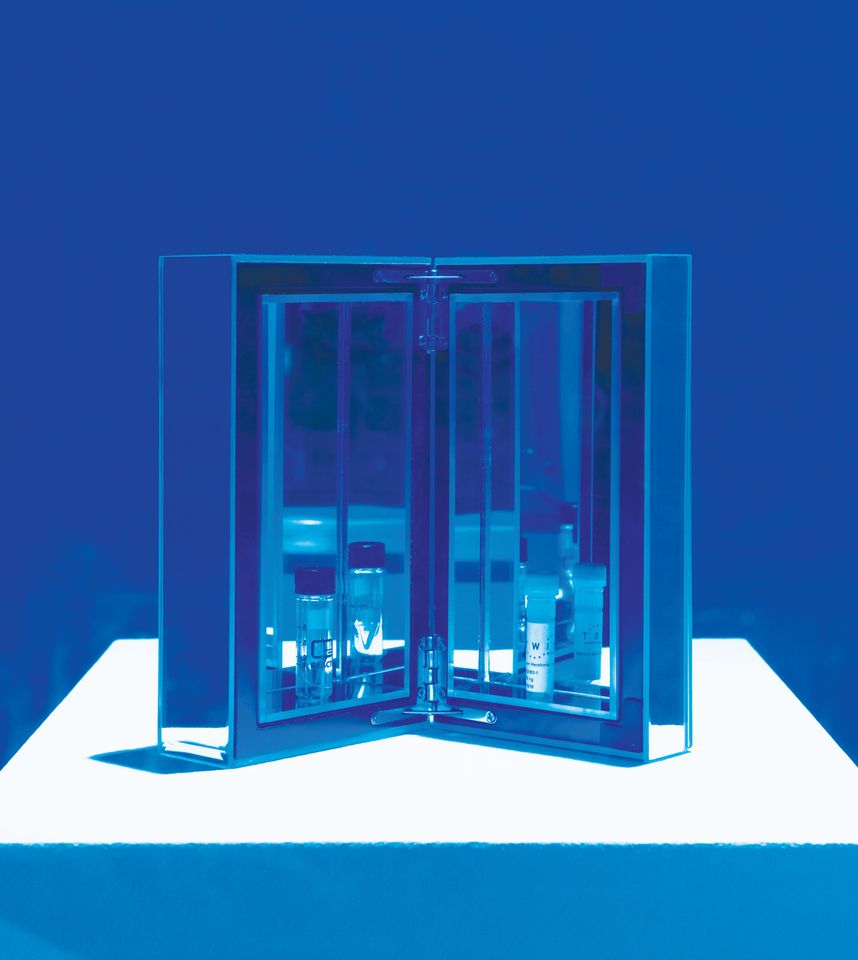 A detail from The Infinity Engine (2014) Franz J. Wamhof

I’m intrigued by the balance between fact and metaphor and question in the work. The show is called Anti-Bodies and there’s the creation of an antibody called Lynn Hershman Leeson…

There’s one for Roberta, too.

Brilliant. But also, the phrase “anti-bodies” evokes an ethical dimension, in terms of how the biotechnological science might be used.

In the best parts of it, it becomes a deeply poetic metaphor for where we are in our universe on this planet, of looking towards the future and looking towards survival and looking towards sustainability. Of course, it’s informed by real information, but then again, you wouldn’t have real information projected against a mirror, or you wouldn’t have the two syringes being like Michelangelo’s touching [The Creation of Adam]. There are things that take a lot of liberties, and that kind of metaphor maybe has a deeper resonance in getting to what this is all about, just in the initial imagery. Or there’s a room that’s completely wallpapered with some of the new life forms that have developed because of CRISPR, and indeed our whole planet is being wallpapered with new living systems that we have no idea about. Thousands every day are being created, and then these will create more of these new living systems. 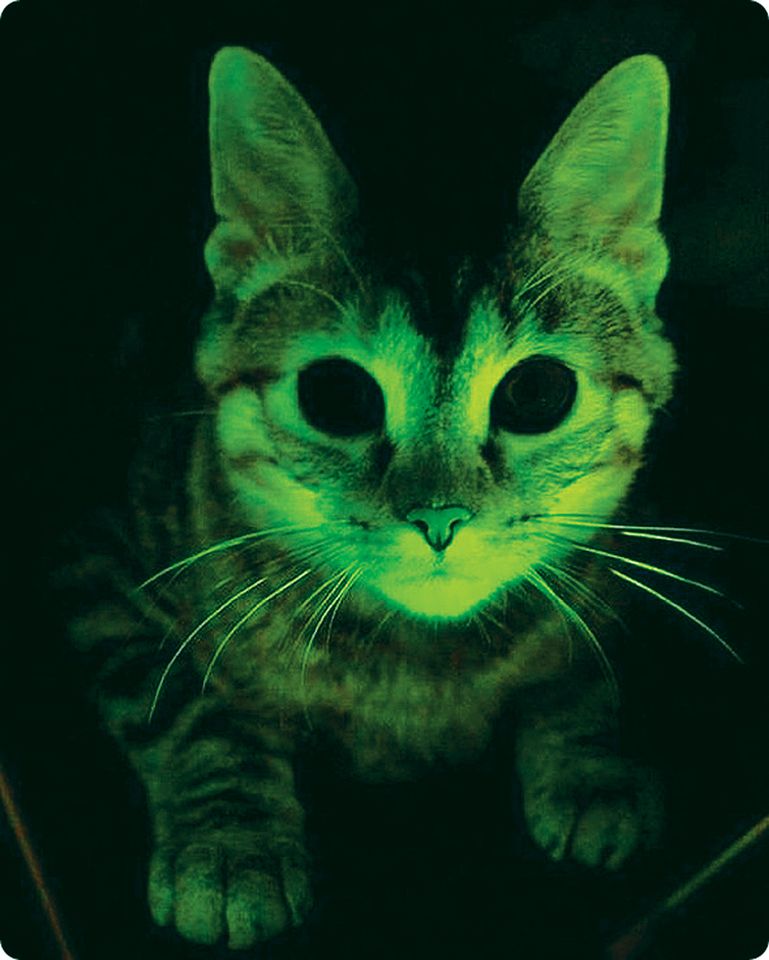 We are in a political climate where there is a distrust of climate science and also biological science, especially within conservative politics, in America. Would you say that The Infinity Engine is a political statement?

Absolutely. All of my work is. Having grown up in Berkeley in the 1960s, you get vaccinated with finding a voice and using that voice to speak about elements of repression and freedom and our future and how we can change things, so I think it’s absolutely political. Because if we are unaware of the dangers that we’re facing, we can never change them, so you’re dealing with difficult issues and topics that many people have never heard about, and you’re able to look through the records of a lot of the supreme court cases against some of these giant conglomerates who are trying to control gene editing and access to pharmaceuticals, and that has to be a political statement.

There is the Michelangelo reference in The Infinity Engine, but you’ve also talked about how you see what you do as a kind of post-Cubist way of thinking about the world.

Absolutely, it really just extends the ideas of Braque and Cubism and Duchamp into the present, and even Cézanne: looking at something from all sides, and presenting different versions of seeing something, sometimes simultaneously, sometimes sequentially. It always seemed to me, particularly in doing interactive works, that the full reference goes back to that origin. 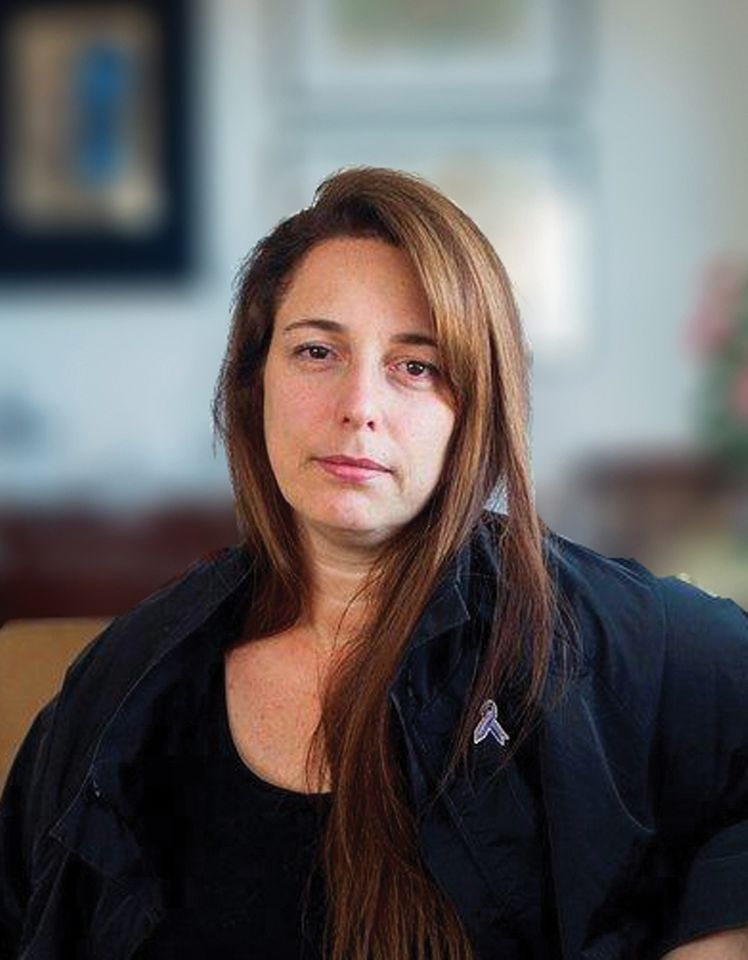 Tania Bruguera Courtesy of the artist

Lynn Hershman Leeson on her film collaboration with Tania Bruguera

In Tania Libre (2017), Hershman Leeson made a film about the Cuban artist Tania Bruguera (below) and the aftermath of Bruguera’s eight-month imprisonment in her homeland. “I had made a film on Steve Kurtz, who was arrested for bio-terrorism,” Leeson recalls. Strange Culture (2007), as it was called, which Hershman Leeson says she made “for ten cents”, had a dramatic effect. “Steve and many people feel that the film is what got his charges dropped,” she says, “and so you see the power of using art and media to inform people, but actually to take action and make changes in the real world. So, when I heard about Tania’s plight, that she was imprisoned, she couldn’t get out, she didn’t know when she would get out, I thought that maybe I could help by doing something.” She initially made contact with Bruguera’s sister, but the artist herself was released from prison soon after Hershman Leeson started her film. “We met within ten days of her release and she felt that she was suffering from post-traumatic stress. So we went to the man who named post-traumatic stress: his name is Frank Ochberg and he lives in Michigan, and we had a three-day therapy session about post-traumatic stress and the effect that it was having. And that related both to the family structure, the time you grew up in, as well as the cultural conditions for repression. Basically that became the film: the whole thing was really about how one escapes, in her case through her art, or the means to survive this kind of silencing.”