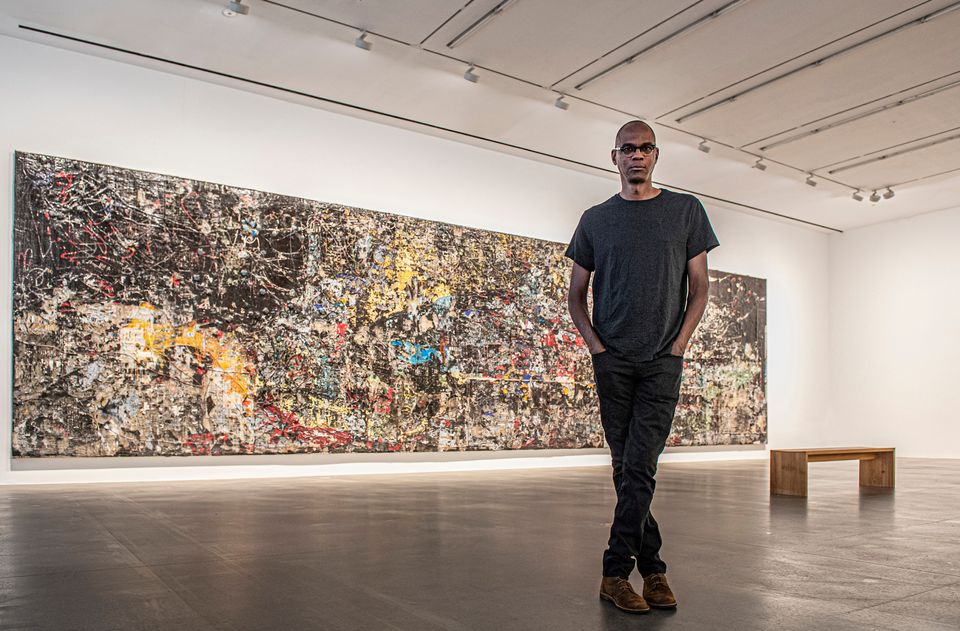 Mark Bradford has titled his exhibition at Hauser & Wirth in London Cerberus after the three-headed dog that guards the underworld in ancient myth. But, as he tells us in the latest podcast from The Art Newspaper, he is using this ferocious beast to address the horrors of the present. “Cerberus for me was about modern-day gatekeeping, this modern-day xenophobia,” he says. “And I live on a border, I live in between the US and Mexico. So all of the language at the moment is absolutely about watching out, watchdogs, invasions, ‘they're coming’.”

But there is another leap in time that Bradford takes in addressing his subject: the starting point for the nine huge paintings and the video that accompanies them was the Watts Rebellion in Los Angeles in 1965, a seminal moment in the US civil rights story. In August that year, an African American man, Marquette Frye, was arrested for drunk driving on the edge of the Watts neighbourhood. A struggle between the police and three members of the Frye family, witnessed by many in the area, triggered six days of riots; 34 people died, more than a thousand people were injured and huge numbers of properties across the district were destroyed. Martin Luther King, who visited Watts in the aftermath, spoke of the “economic deprivation, social isolation, inadequate housing, and general despair” of black communities living in ghettos as “the ready seeds which give birth to tragic expressions of violence”. He added later that the Watts riots were “the beginning of a stirring of those people in our society who have been bypassed by the progress of the past decade”.

A map in the McCone Commission report, the analysis of the riots commissioned by the California governor and released in December 1965, is the bedrock of Bradford’s vast new works using his trademark layers of paper and washes of paint—the one titled Cerberus is more than 13 metres wide. He was interested, he explains, in “the way that [the commission] delineated the data” with coloured dots—“they had blue for looted and red for deaths, and these little hot spots really kind of fascinated me. So that's really where I started, with laying this map with these hotspots.” But soon, he says, “imagination took over and you start with accumulating more and more hotspots and it starts to float on top. So it's almost like the social became abstraction. That's what I love to do: to take something social and abstract it. But you know that it's not going to ever fully belong to the history of abstraction, it's not going to fully belong to the landscape of where it came—it exists somewhere in between. And that for me as an artist gives me that space. I can work out my ideas, my pain, my trauma, my position in that in-between space.”

In the film, Bradford took vintage film of Martha and the Vandellas performing their hit Dancing in the Streets, released the year before the riots, and drove around the Watts area, projecting the footage onto the buildings that stand there today. Bradford was three years old when the riots happened and says that his relationship with the events “is all through stories. It's almost like myth-building by this point.” And that influenced his decision to use the Motown classic: Dancing in the Streets has “a double meaning” relating to the events in Watts, he says. “One side is that it was a beautiful 1965 summer song… another side was that it was actually a call to arms for people who protested when the city was actually burning.” He adds: “Everything that I understood about 1965 was through my mother, through her friends.” When he spoke to them about the song, he says: “One of her friends said: ‘Absolutely no, it was just a wonderful song for Motown summer.’ And my mom was like: ‘Absolutely it was a revolutionary song, it was a call to arms and it went through the airwaves and we knew exactly what it was.’ So it still, to this very day, has this fabric of myth. And that's why I use that that song.”

Driving around the city projecting the video onto buildings was another way of mapping the site of the Watts Rebellion, he says. “I wanted the difference between God's view [in the paintings], and [the video] was very micro, very up-close. And I really wanted to make the faces big so it felt like this psychogeography, that had this ghost of memory on top of it. And I really wanted to keep it in the part of the city that would have been part of 1965: buildings in that part of the city would have burned down.” Those that stand there today reflect how “wars and unrest re-map parts of the city very quickly”, Bradford says.

In his works, he has said there is a sense of nature reclaiming the city, suggested by the McCone Commission map being obliterated by layers of paper, rope and poured paint. It’s partly an evocation of the collapse of civilisation—Bradford has likened it to Angkor Wat in Cambodia. And despite his deep concern about the present realities that prompted him to think of ancient three-headed dogs, the obliteration could also be a metaphor for hope. “It'll turn around,” he says. "it always does."

You can hear the full interview on The Art Newspaper Podcast, in association with Bonhams, which you can also find on Apple Podcasts, Soundcloud, TuneIn or wherever you usually subscribe to your podcasts. Also in this bumper episode, made to coincide with the Frieze art fairs, Louisa Buck talks to Ai Weiwei, we hear from Peter Doig about his latest exhibition, we talk to Hettie Judah about her book Art London and we explore what the Frieze fairs tell us about the market in the UK and beyond.