'We need to dance our asses off': artist and activist Patrisse Cullors on the joys of Black resistance 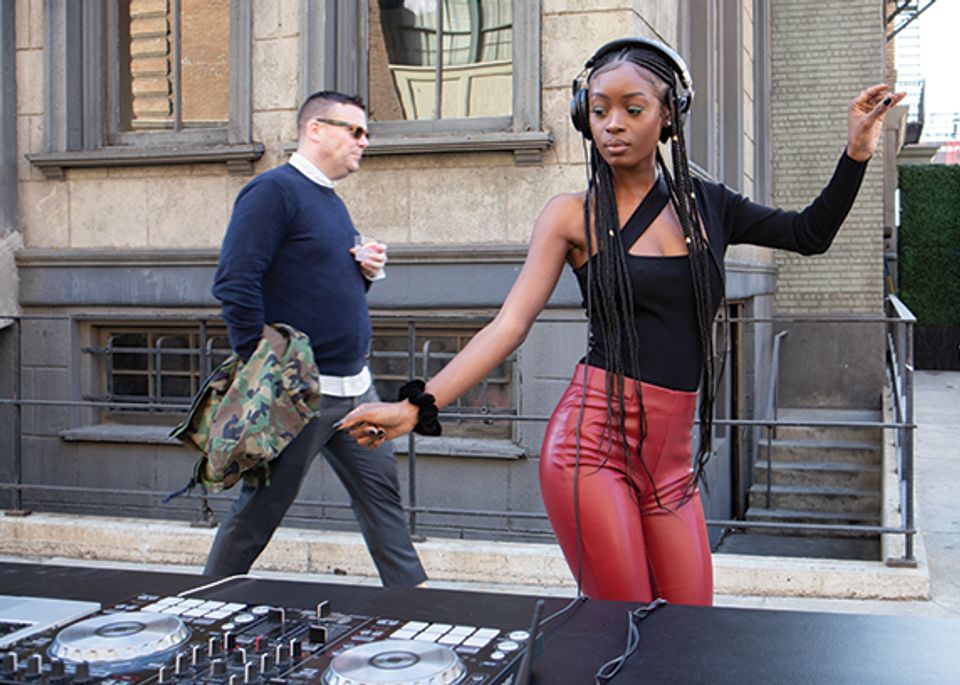 The Los Angeles-based activist, artist and writer Patrisse Cullors is an influential figure in social justice movements tied to imprisonment, mental health and violence against Black and other marginalised communities. She co-founded Black Lives Matter in 2013 shortly after the acquittal of 17-year-old Trayvon Martin’s murderer, and she is the founder of Dignity and Power Now. Cullors is also the co-author, with Asha Bandele, of When They Call You a Terrorist: A Black Lives Matter Memoir.

At Frieze Los Angeles, Cullors will offer up an iterative and participatory project in the Paramount backlot, Fuck White Supremacy, Let’s Get Free. The performance, organised with the support of LTD Gallery, which specifically represents women and people of colour, was first conceived in the wake of the detainment and forced separation of child asylum seekers at the US-Mexican border.

We spoke with Cullors in Los Angeles about her upbringing, her involvement with numerous movements and how a line dance—the Electric Slide—can become a method for collective healing and fellowship. 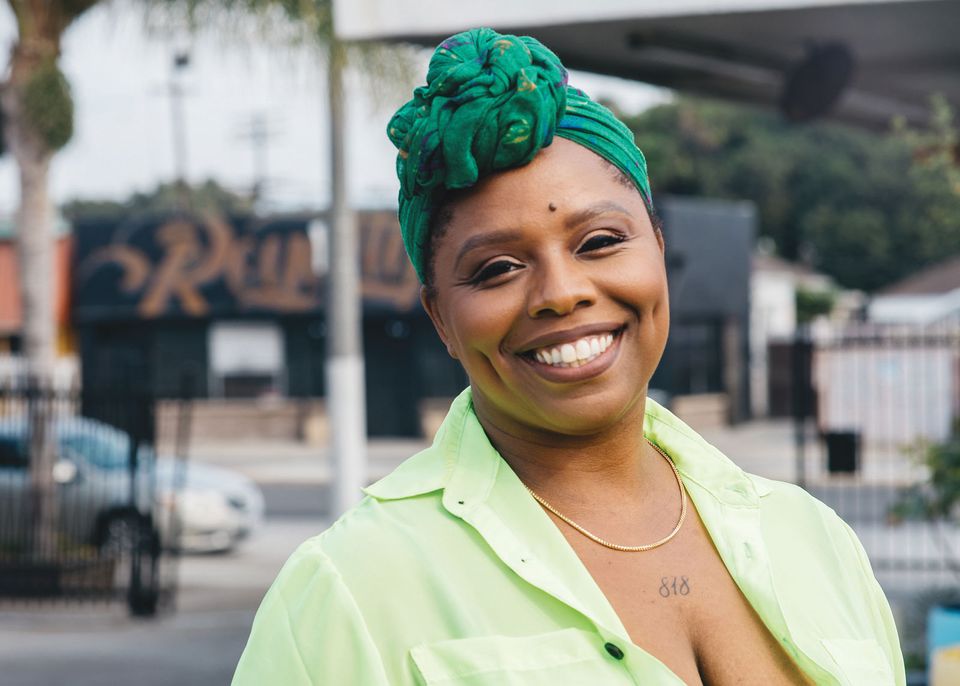 The Art Newspaper: When I speak with Black artists, I like to get a sense of how their ancestors moved through this country. Where are your people from and when did they come to Los Angeles?

Patrisse Cullors: I love this question. I don’t think any journalist has ever asked me this. On my mom’s side, her mom is from Des Moines, Iowa. My grandmother’s father was from Cuba and her mother was also from Iowa. My great-grandmother on my mom’s dad’s side is from Arkansas and Oklahoma, and migrated to California in the 1940s. Then, on my dad’s side, both of his parents are from Louisiana: a small town called Eunice.

Since your family has been here for multiple generations, and Los Angeles is so embedded in your work and activism, can you tell me more about when you started working in performance?

I grew up dancing. My great-grandmother Jennie Endsley, who’s from Arkansas, planted a seed—“You know you really should be in dance classes”—and I didn’t know that was a thing. I ended up going to a performing arts middle school in Sherman Oaks, California that really transformed my understanding of expression and creativity. I finally found a place where so much of my childhood antics became a thing that could be professionalised. From there, I put myself in a dance studio. When the Yellow Pages still existed, I looked through all the dance schools in my neighbourhood and cold-called them, and asked for scholarships because I knew my mom couldn’t pay for it. A studio in Northridge actually accepted and I convinced my father to take me down there; I danced with that company for four years. By then, as I was becoming politicised, my dancing kind of shifted into performance.

We are in this moment where there are many artists who aim to blur the lines between art-making and having a social or radical practice. How do you feel about this idea that art can change the world?

If we look at the history of social movements, there’s always been a deep element of artistic and creative practice that is in conjunction with those movements. We look at the Black Arts Movement and I feel like I am a part of that legacy of taking these really political concepts and expressing creativity around them.

A big part of the Black Arts Movement was imagining a new freedom for us. The way in which we understand art has so much to do with the canon. For Black people, art is not necessarily about the gallery or museum: it is literally how we live our lives. There’s no way we could have survived—slavery, Jim Crow, the Black Code, incarceration—if we didn’t have a creative practice and expression. There are all these ways in which we’ve been violated and yet there’s a resilience in us.  I don’t want to paint us as a magical negro, or this archetype character, but there’s something really profound about a people who have been able to continue to be present for themselves and their communities and recreate expression. 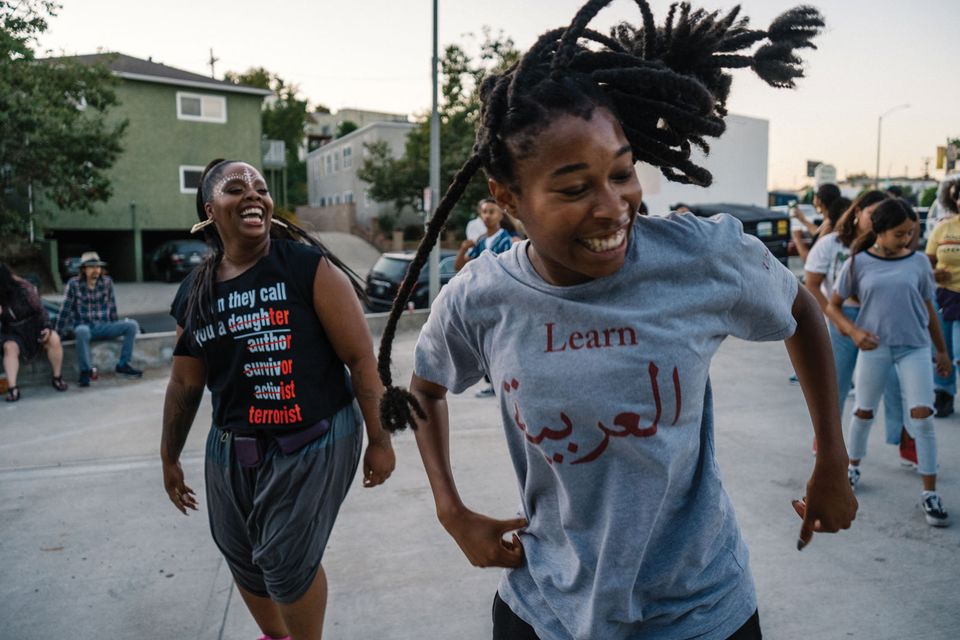 Fuck White Supremacy, Let’s Get Free was developed in response to the detainment of children at the US-Mexican border Photo: Giovanni Solis; courtesy of the artist and LTD Los Angeles

What was the motivation for Fuck White Supremacy, Let’s Get Free and how do you see it functioning in the context of an art fair?

The main thing I was trying to respond to was the fact that all these children are in cages, at the border. It was when all of the images of their caging were being released. It’s so hard in those moments because it’s like, “What the fuck can you do?” And the moment I saw the images, I thought: “We need to go fucking dance.” We need to be in the streets, and we need to dance our asses off. The last four years of this administration has been demoralising: part of the response is to not allow them to take away our joy—not allow them to take away our laughter, our creativity. And the Electric Slide [which is central to the performance] is a staple for Black folks when we go to every event. At least one time, you gotta do the Electric Slide.

I wanted to show people how my fightback isn’t just a protest, isn’t just changing lives; it’s also showing up and enjoying myself in community. It’s really important that it happens in community. And so Fuck White Supremacy, Let’s Get Free is really an ode to people at the border in particular, our communities at the border, and communities who are caged throughout our country and the world.

We will also have merchandise co-created with Katula by Africana, a West African shop in Los Angeles, to support the Vote Yes on R campaign [to reform Los Angeles prisons] that I’ve been working on for the past two years.