In person: Pilar Ordovas on playing hard to get and striking out on her own 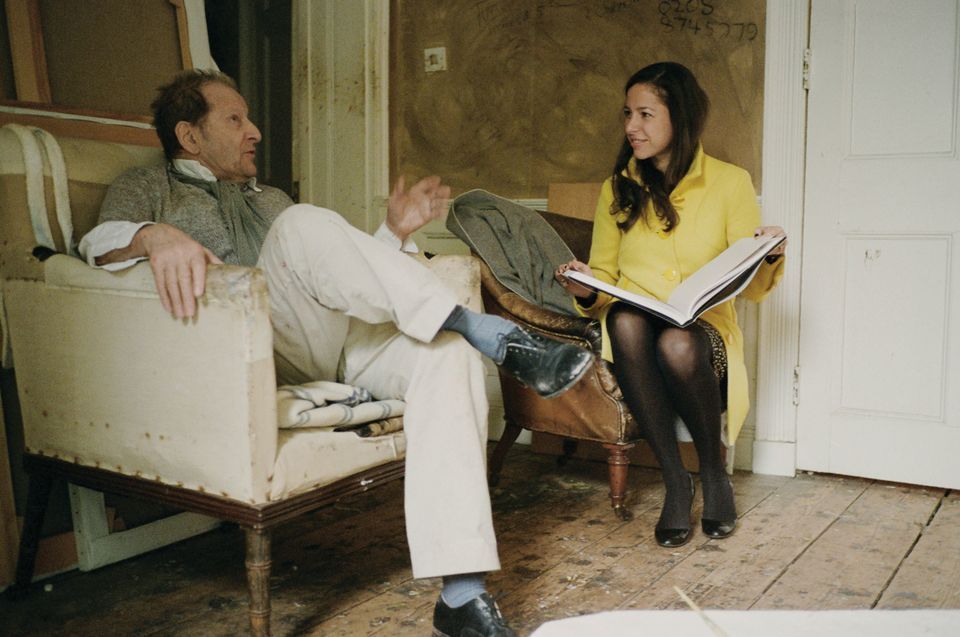 Pilar Ordovas brought Lucian Freud’s 1995 Benefits Supervisor Sleeping to auction in 2008 (she is pictured with the artist, below); the portrait sold for a record price in Christie’s New York salerooms © David Dawson

In an age of over-exposure, Pilar Ordovas likes her art to play hard to get. That is why she refuses to do fairs, art’s equivalent of speed dating, of sell-and-tell. Ordovas prefers the intimacy of the private viewing room.

“I go to Art Basel and see identical booths that I’ve seen in five locations. I prefer to keep out of it – instead of exposing my works in that way, and burning them if they don’t sell. I prefer to do a few exhibitions a year in London and New York,” says Spanish-born Ordovas, her IWC Schaffhausen watch offset by a broken finger – she fell while running to meet her husband, the film producer Simon Astaire, for breakfast in Los Angeles. But, she reassures me, her phone was ok. Ordovas is polished, stylish, but with the grit of a doer.

Ordovas has stuck to a discreet path ever since she opened her sleek Savile Row gallery in London’s Mayfair neighbourhood with a show called Irrational Marks: Bacon and Rembrandt in 2011. For that, she persuaded the Musée Granet in Aix-en-Provence to lend Rembrandt’s Self-Portrait with Beret (around 1659). It was a loan show, nothing was for sale, setting the tone for the scholarly exhibitions that have followed, including Painting from Life: Carracci Freud, staged in collaboration with the Dulwich Picture Gallery, bringing together head studies by Lucian Freud and Annibale Carracci.

A newly independent dealer launching their first commercial gallery with a show in which nothing is for sale seems contrary and begs the question: how it is viable? “The way that my exhibitions work is that there is not necessarily something for sale on the walls,” she says. “I do need to sell things and, of course, on the back of the exhibition, I’ll be selling something. I might have a Bacon and Rembrandt show that is only loans, but I’ve sold a large Bacon triptych that you will never know about.” Sometimes she will have already sold a work, and then does a related show. “It doesn’t necessarily go hand in hand, but there’s always some sort of relationship,” she says, but adds, “you, as a member of the press, will never know if something is for sale.” She smiles openly but her dealings are a closed book.

Such secrecy is at odds with increasing calls for transparency and yet, as auction price data becomes ever more accessible online, there are those – such as Ordovas – who continue to value privacy. Keeping the price of a work confidential, and restricting access, safeguards it, she says. But, how? In Ordovas’s view, knowing the price of a work might encourage chancers to “start shopping that piece around to other people, sending images, approaching auction houses. It is a responsibility that one has when one is handling something really important, to keep it protected and fresh”.

Ordovas cut her teeth in an auction house. After graduating from Edinburgh University, she joined Christie’s as an intern in the Modern British art department and left 13 years later as international director and deputy chairman of post-war and contemporary art in Europe. Christie’s was a “roll up your sleeves and learn” experience. When she joined the contemporary department, “there were four or five people in Europe”; by the time she left the company, there were 100. “The wonderful thing about starting when the market was much smaller was that I got involved in so much more.”

Recognising she needed a niche, Ordovas decided early on to concentrate on two artists, Francis Bacon and Lucian Freud. “I got to know where all the works were, who collected them. That’s one of the things that really changed my career.” She met Freud after consigning to Christie’s a landscape that he had painted in the 1970s and had not seen since. “He invited me to his studio, that’s how our friendship started. I started bringing works for him to see. His knowledge on Bacon was phenomenal. He was the only person that really went on a regular basis to his studio. I would take Lucian’s own works to him, but I would also take works by Bacon and others that I knew he was interested in. He loved horses and he was always interested in seeing drawings of horses by Degas.”

Freud would, Ordovas says, make her “look at things in a completely different way, that way of showing you things in a very practical way, like ‘stand here, look at it without this. What do you see?’”.

Little surprise, then, that Larry Gagosian started calling, asking her to work with him and “develop the secondary market side” at his London gallery. In 2009, as supply of major works dwindled post-Lehman Brothers crash, she did. “The auction world really slowed down” Ordovas says. “Christie’s wanted me to do more private sales but, well, when you spend all your professional life trying to persuade people to sell at auction and then you have to tell them ‘no, sell privately’… it didn’t feel right.”

Freed from the auction treadmill, Ordovas spent six months planning her first show for the gallery, about Francis Bacon, Lucian Freud and Alberto Giacometti. Gagosian’s managing style was “very hands off – as long as you are making him money, he doesn’t really get involved. He is very hands on in terms of putting pressure on all his team to produce. But if you produce results, you have pretty much all the freedom you want”. That said, Ordovas started wondering what was stopping her from doing it alone. So, in 2011, she opened on Savile Row, followed by a New York space in 2015.

"It was easier when I was on my own"

Some long-term clients had been wary when she joined the Gagosian stable. “He divides opinion, he’s very American and ruthless. I almost had to justify that I was still personally looking after them and not to worry,” she says. “So, it was sort of easier when I was on my own.”

The secondary market is Ordovas’s bread and butter – she does not represent living artists, though equally she does not rule out the possibility. She did represent one estate, that of the Spanish sculptor Eduardo Chillida, but lost it to Hauser & Wirth in July last year. That hurt. “It was hard, but I understood. They’re a family of eight, it was going to become a huge family issue. In some ways, looking back on it on with a bit of distance, they took a huge problem off my hands, but it was also a great sadness.” Hauser & Wirth’s gallery is immediately opposite Ordovas’s – on leaving I remark on its proximity. She smiles ruefully.

Though from Madrid, Ordovas went to school and university in the UK, where she has spent her whole professional life. Inevitably, I ask her about Brexit. She sighs heavily: “I have built my life and my career in this country, I employ lots of UK citizens. And I don’t even get to have an opinion because I am a Spanish citizen. I am a child of the EU, so I am very upset about what is happening in the country that I love.”

She adds: “I hope I won’t have to move, but I do think...let’s see what happens. I mean, we don’t even know what’s going to happen with regard to the free circulation of works of art. There are still a lot of question marks.”

We live, she reflects, in strange times: “I spent a lot of time in America and this sense of disbelief, of uncertainty, I feel it now on both sides of the ocean for different reasons. Economically things are very stable over there, but you hear the news and you want to cry.”

Ordovas’s next show, opening on 24 September, commemorates Peggy Guggenheim’s short-lived London gallery, Guggenheim Jeune, opened just around the corner at 30 Cork Street in 1938. The gallery was only open for 18 months, its life cut short by the Second World War, and the building was later bombed. “Peggy came to London with no business experience not knowing whether she wanted to open a bookstore or a gallery,” Ordovas says. “London was a really crucial experience, because she realised that she wanted to open a museum. One year really shaped who she became afterwards.”

The show will tell the story of the gallery through paintings and sculptures by Jean Arp and Yves Tanguy – two artists championed by Guggenheim – including some loans from the National Gallery in Scotland and the Hepworth Wakefield, alongside vitrines of archival material. Perhaps some will be for sale but, if they are, Ordovas is not telling me.