What is the best way to spend your money at Frieze Los Angeles? The answer may be written in the stars, according to the artist Lisa Anne Auerbach. For the fair’s first edition, she is presenting a performance piece called Psychic Art Advisor (2019) in which visitors enter a brownstone in the backlot of Paramount Pictures Studios to receive one-on-one psychic readings that aim to unshroud their doubts around collecting and the art market.

The Los Angeles-based artist is an associate professor of art at Pomona College. She is primarily known as a photographer and for her politically charged textile works, which are both wall-hung and wearable. In the 2014 Whitney Biennial, Auerbach presented large-scale knitted pieces with text and images referencing grassroots activist groups ranging from the Russian feminist punk band Pussy Riot to the Danish movement Honsestrik (“chicken knit”), which encourages people to create their own knitting combinations rather than succumb to mass-produced patterns.

She has had solo shows at the Aspen Art Museum, the University of Michigan Museum of Art and Nottingham Contemporary in England, among others. She currently has an exhibition at Gavlak gallery in Hollywood (until 16 March). The Art Newspaper: How did the idea for a psychic art advisory come about?

Lisa Anne Auerbach: I have an ongoing series that I started in 2003 where I photograph small freestanding businesses around the US, and in 2014 I began another project that focused on storefronts for psychic advisers in Los Angeles. Most of these “apartment psychics” are running businesses out of their homes or in these half-closed places where you can’t exactly tell whether it’s a real business or a front. When I visited the backlot of Paramount Pictures Studios and thought about what I could do for Frieze, it struck me that the brownstones look similar to the types of places these psychics operate from in urban cities.

This project also builds on the idea of artists opening businesses of some sort. Around two years ago, I opened my own freestanding business out of a shed in our backyard called The Meow, and we had different people operate in that space, including a tattoo shop, a record store and a store specialising in Sillisculpts [the kitschy statuettes popular in the 1960s and 70s]. So the Frieze project brings together those ideas.

How does the businesses of psychic advisory and art advisory overlap?

A good connecting idea is that you’re entrusting the people in both jobs with potentially big decisions. You’re asking them to predict the future, or you’re asking them to think about choices you’ve already made and affirm that those are the right decisions. Often, when people go to psychics, they go there knowing what they want to hear but they want someone else to validate it. With art advisers, that relationship is very similar.

It’s also been illuminating to understand the relationship between the psychic and the customer. It’s the same relationship between the collector and the adviser, or someone who is interested in art and the artist. The relationships are both one-on-one opportunities to make a difference in someone’s life or proselytise about something that you’re really interested in, in a way that feels real and intimate. Also, a lot of art advisers and psychics use their homes as their office, and they are primarily women, in my personal experience. 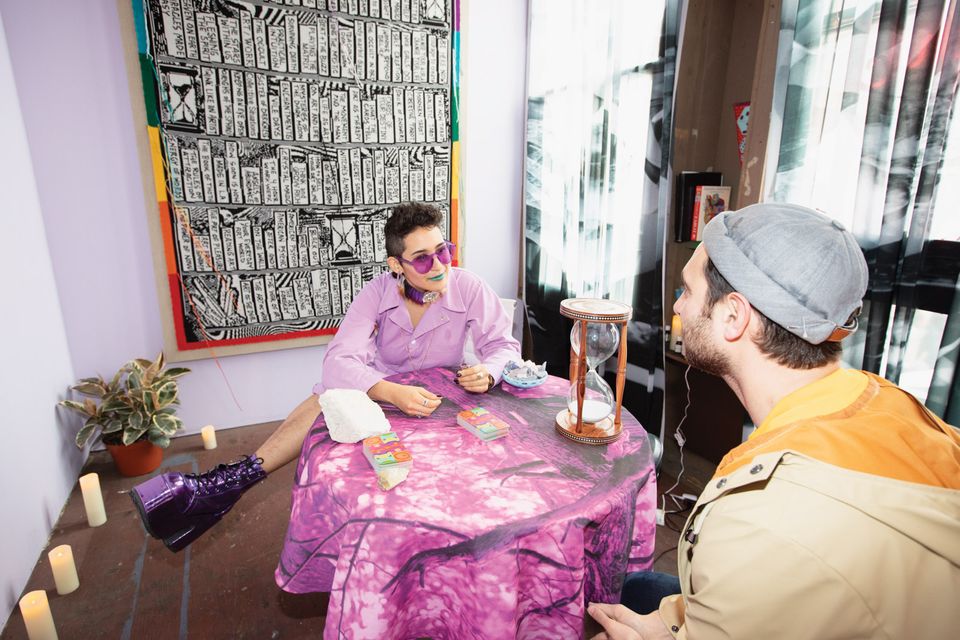 It’s intentionally funny. There’s a big neon sign and it reflects on art advisory as another kind of freestanding business that someone might open in a backlot. What’s interesting to me is work that’s not totally didactic and humourless but that uses humour as a way to maybe help the audience look at something in a different or more meaningful way.

What can the art world expect from their psychic readings?

I’m not the one performing the readings. Alpine Moon, the nom de psychic of the Los Angeles-based performance artist Estela Sanchez, is the psychic art adviser for most of the [fair’s run] and then a few other performers are also stepping in. Each person has a 25-minute session and none of it has been pre-rehearsed. It’s all improvised on the spot. People bring in their questions about the three Cs—curating, collecting and creative endeavours—and through some tools we will settle some of those issues.

We have five-sided rainbow dice to roll for divination and there are a deck of oracle-style cards with my photographs called the Readings Deck. Around 100 copies of these decks are being printed and the images are evocative of a number of different things. I believe you can tease out all sorts of illusions and ideas in any image when you really take the time to examine them. Inside the space, there are some of my textile pieces as part of the decor.

You’ve said that Los Angelenos seem to be interested in alternative spirituality. Why?

I feel like that’s always been the case with California in general. It’s this place for seekers and dreamers—or at least that’s the myth of California, anyway. I grew up in Michigan and we always referred to California as the land of fruits and nuts. It’s the reputation of the state, although I don’t know if it’s even that emblematic of California anymore. It seems to be everywhere now, especially among young people I know who refer to astrology as a real thing and spend their time consulting decks and the stars.

Outside of the fair, where else can the Frieze Los Angeles crowd see your work?

I have a show called Libraries at Gavlak gallery consisting of a series of knitted images of bookshelves. The bookshelves are based on a few different libraries, including that of a colleague who teaches sociology classes focused on terrorists and extremists, the library of a yoga studio and an imagined library belonging to Donald Trump that is, as you might imagine, stocked primarily with books he has written.