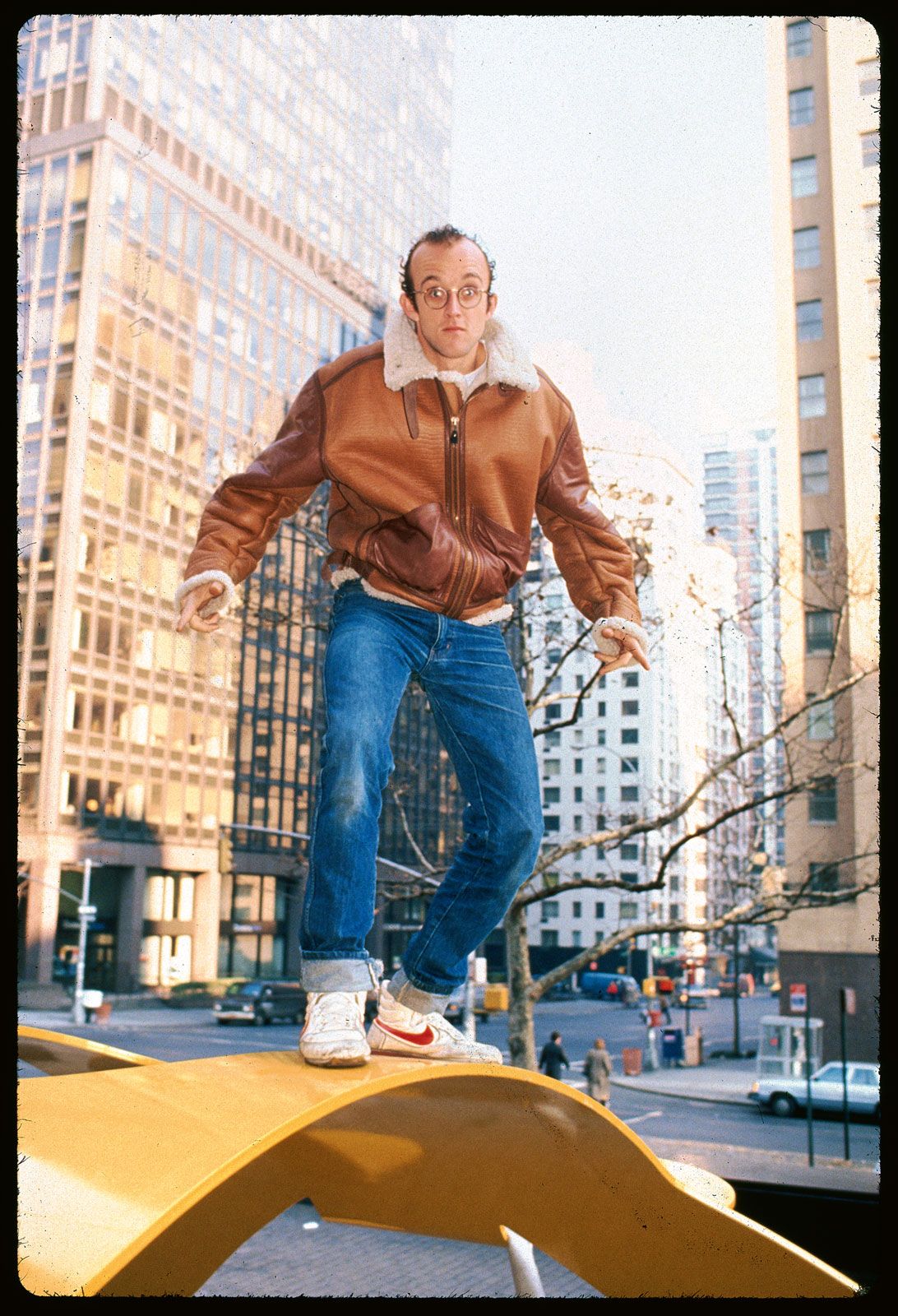 Keith Haring on top of one of his sculptures © Getty

The remarkable life of the US artist Keith Haring and the frenzied spirit of the New York City art world in the 1980s are brought to life in a new book written by Simon Doonan. The British writer, fashion commentator, bon vivant and former creative ambassador of Barney’s department store, delves deep into Haring’s world. Doonan says he is “not an academic” and wanted to write a book that was “accessible and captured that era where different aspects of culture—like fashion, music and art—were colliding and creating an incredible energy”.

From Haring’s activism in the Aids and crack epidemics to the over-the-top parties he attended alongside Madonna and Andy Warhol, Doonan’s fly-on-the-wall account provides an intimate glimpse into Haring’s rise as an artist, his populist ideals, the sharp criticism he faced during his lifetime and his legacy, which was cut tragically short when the artist died from complications from Aids in 1990. Keith Haring (2020) is published this month by Laurence King Publishing as part of its Artist Lives series. 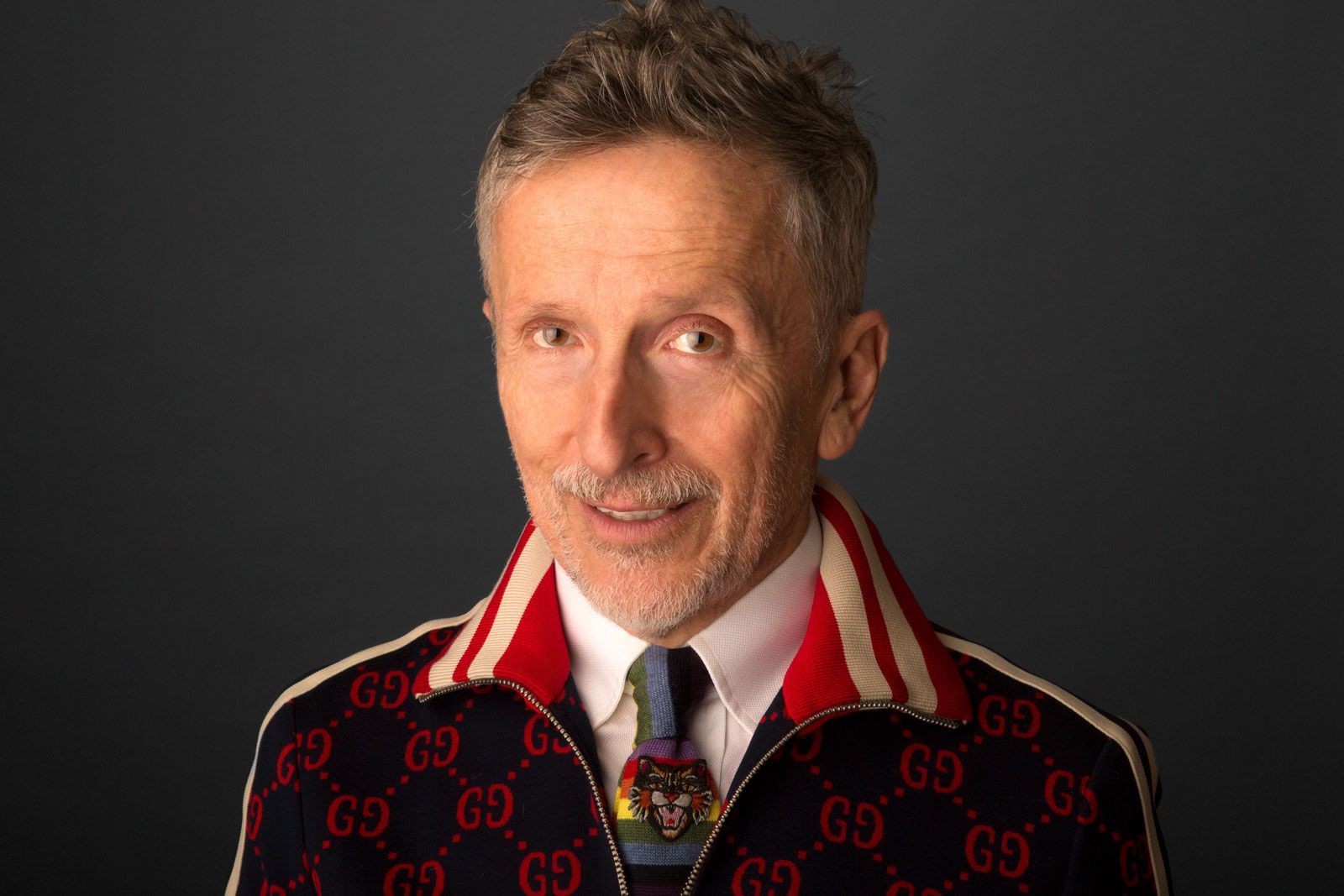 The Art Newspaper: You describe first encountering Haring’s work on your friend’s t-shirt, which Haring had drawn on during an opening in New York in 1982. You mention there was a buzz building up around him at that time but he hadn’t been elevated to “superstar” status yet. What was your initial impression?

Simon Doonan: While I didn’t know who Haring was at the time, I remember thinking his work was so energised, fun and unusual. It was cartoon-like and reminded me of graffiti. I met him later because it was hard not to run into him if you were an artist living in downtown Manhattan and going to places like the Area Nightclub, Limelight or Palladium. He was gregarious—as I was at the time, too.

You flash forward three years to a charity event at Barney’s, where Haring—along with Jean Michel-Basquiat, Robert Rauschenberg and Warhol—is partying with Madonna, his work now internationally known and collected. But you note that one memorable aspect of that evening was that the artists involved generally seemed much “less neurotic and much more freewheeling” than they are now.

That observation maybe stems from the fact that the art world was a much smaller universe back then. It was a small group of people and there just weren’t that many events. You could call on a group of people and they would reliably show up. Now the art world is a global enterprise, with Art Basel and Frieze fairs here, there and everywhere. If you’re a publicist today then you’re battling day and night to get key people to come to your events—pre-coronavirus, obviously—but, back then, people wanted to be a part of this new world that was taking shape. This particular event was also the first Aids benefit held inside a store, so I think people sensed that there was something major happening. There was a budding cultural shift where art, music and fashion were colliding in ways they hadn’t so much in the past.

A lesser-known facet of Haring’s career is that he faced relentless backlash from the art world during his lifetime for being too “commercial”, market-conscious and for selling branded products, which is more common today but still sometimes viewed as low-brow. Do you think the criticism was warranted?

He was daring in the way he approached art and [was] also very much encouraged by Warhol, who told him not to worry about what people said or thought, and who believed that he was onto something great. He wanted to communicate something to regular people rather than being an esoteric artist who didn’t, but, in doing that, there was the risk of being accused of being too commercial. I always thought that type of criticism was silly but, when you achieve that level of fame, people can be envious. He had so much drive and was also so good at promoting himself, and that can bring out the green-eyed jealousy in some people.

Haring’s auction record, for an untitled work he made in 1982, is nearly $7m. And although he was highly successful in his lifetime, in the book you note a Village Voice interview where he says he never sold a work for more than $10,000. What would he think about the current circus of the art market and the astronomical mark-up of his work?

He would indeed think the art world was this crazy “circus” that got out of hand but would have likely enjoyed it, too. He would want to be part of it and would be part of it, I think. 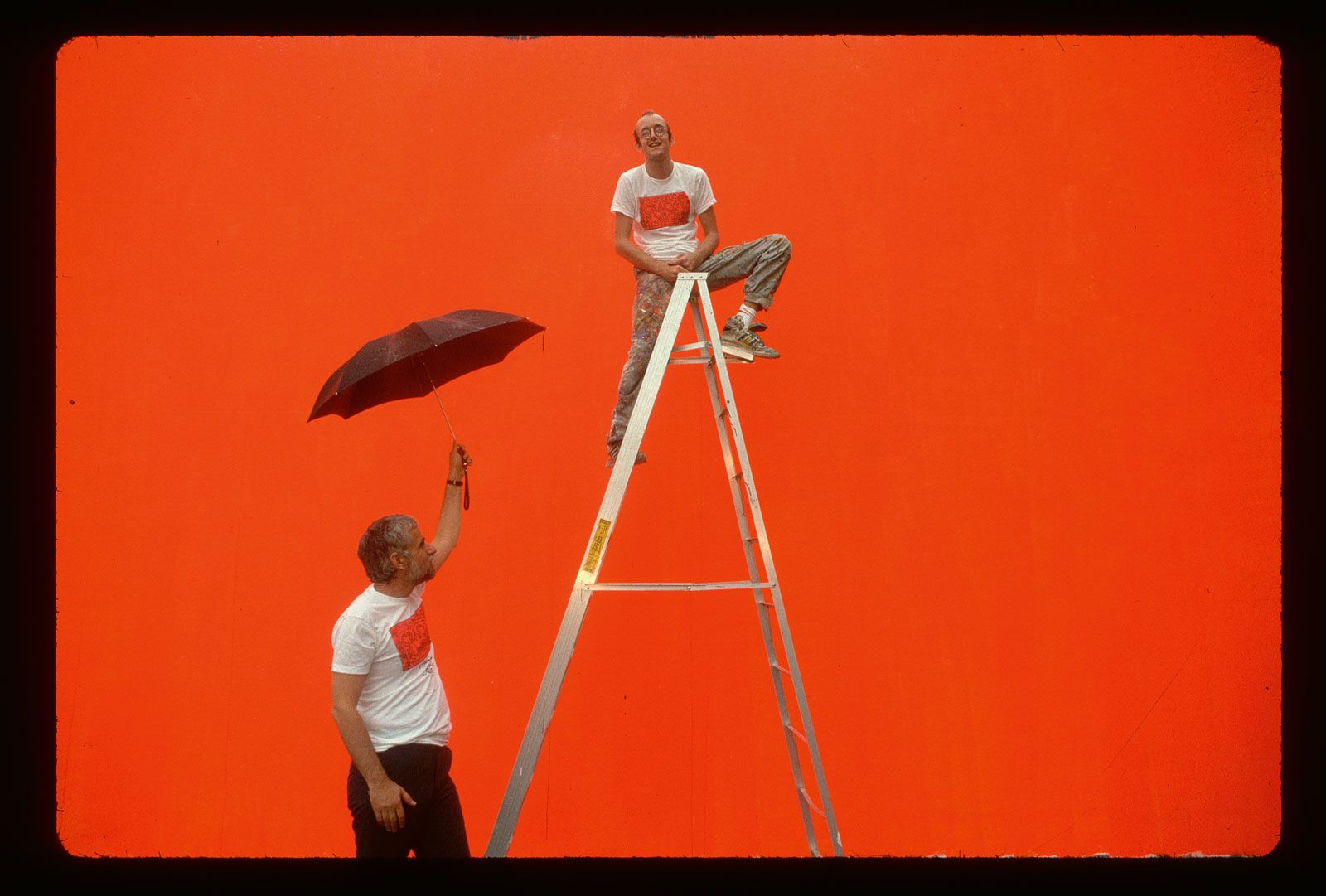 Keith Haring on a ladder, in front of the bright orange undercoat on which he would paint his mural Crack is Wack, with the New York Park Commissioner Henry Stern holding an umbrella © Getty

You also mention that comparisons of Haring with Warhol are inevitable but that, unlike Warhol, Haring’s work tended to be less “camp” and amusing and deal with more serious social issues, like the Aids and crack epidemics. Do you believe that is why Haring’s work still resonates today, especially with younger generations?

Social justice issues related to race, politics, drugs and so on are now central to the art world, and topics that Haring regularly incorporated into his artworks. That wasn’t really the case with artists going into the 1990s like Jeff Koons, Damien Hirst and other “sensation” artists who didn’t have that focus and wanted to make extravagant, shocking and attention-getting statements. One is not better than the other, but ideas change and evolve over time, and are often cyclical. In the last three or four years, I believe people are rediscovering Haring because he was very much an activist, and that may be the reason his work is enjoying such a bump and his images are so widely licensed. It feels right.

What else people should know?

I think people who are interested in becoming full-time artists would find this book interesting because it shows what kind of tenacity you need to make it in the art world. It’s a hard profession to get recognition in, and Haring was so resilient and so positive and always working hard. That’s how he got from a small town to the apex of the art world. Anyone interested in him would also find it fun to read his journals, where you get a sense of the arc of his life and what he went through as he became incredibly famous. He is quite heroic to gay men, artists and many other people for many reasons, and someone who left the world a more interesting place. 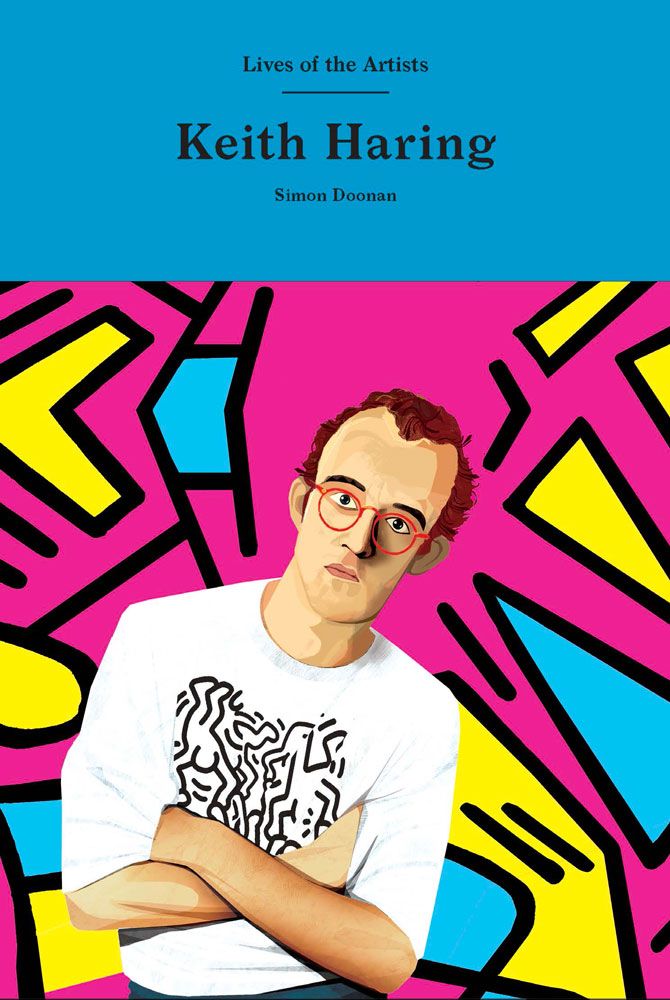