Teresita Fernández, an artist of place, brings her art home to Miami 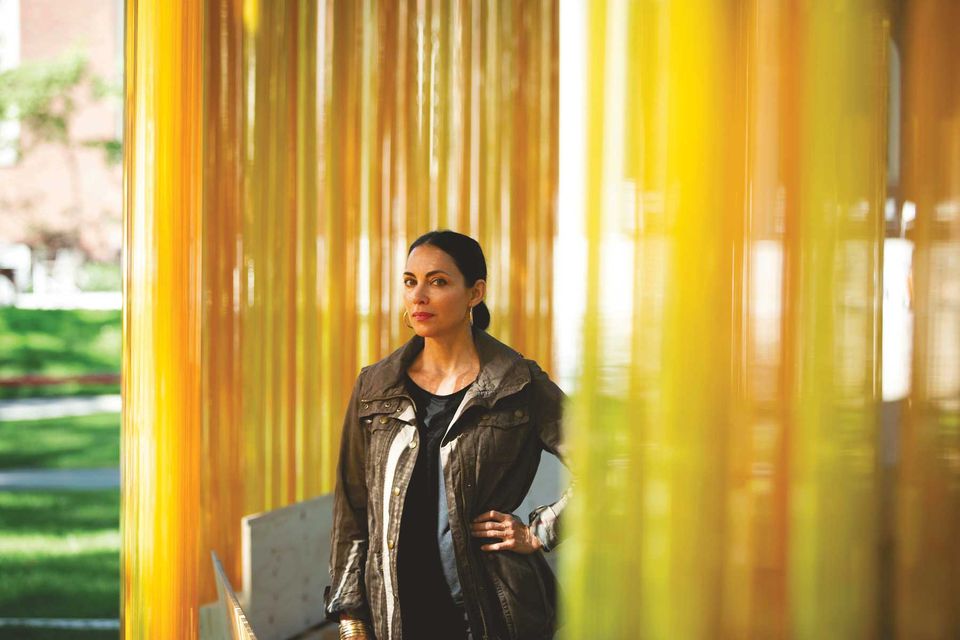 The Miami-born artist Teresita Fernández has returned home for her first mid-career survey, which is being shown at the Pérez Art Museum Miami (Pamm)—a venue that did not exist when she graduated from Florida International University in 1990. When she was a student, it was known as the Center for the Fine Arts (and later the Miami Art Museum), and was the first art museum built with public money in Miami-Dade County, which then Mayor Stephen Clark said was “evidence of the maturation of a city and its peoples”. This large-scale exhibition of more than 50 sculptures, installations, drawings and wall pieces, made by the MacArthur “genius” award-winning artist over the past 20 years, is a further sign of how much Miami has grown.

The Art Newspaper: This is your first full museum retrospective, and a return to the city of your birth and the place where you got your start as an artist. What was it like being a young artist in Miami?

Teresita Fernández: Yes. Just to clarify, though, I’ve lived in New York for more than 20 years. But I did go to undergraduate school in Miami, before going to graduate school in Virginia, and then travelling the world. But Miami was the place that I moved back to after graduate school, and where I first started working on my own. It’s really important that my first mid-career retrospective is in my hometown because so much of my work is about place and about unravelling one’s relationship to place. So it was loaded in lots of ways, personally as well, to be able to contextualise it within that framework.

It also seems like a city that really encapsulates a lot of the themes you explore in your work—this idea of the American landscape and how that’s changed, not just naturally but also politically and socially.

Absolutely. Miami is an immigrant city built on the labour of immigrants and black and brown people. My family happens to be from Cuba; they came right after the revolution. But certainly Miami, which is a very young town as well, was built on the labour of Bahamians, Haitians and Cubans. So, this expansive sense of a Caribbean presence in the city goes back a long way. 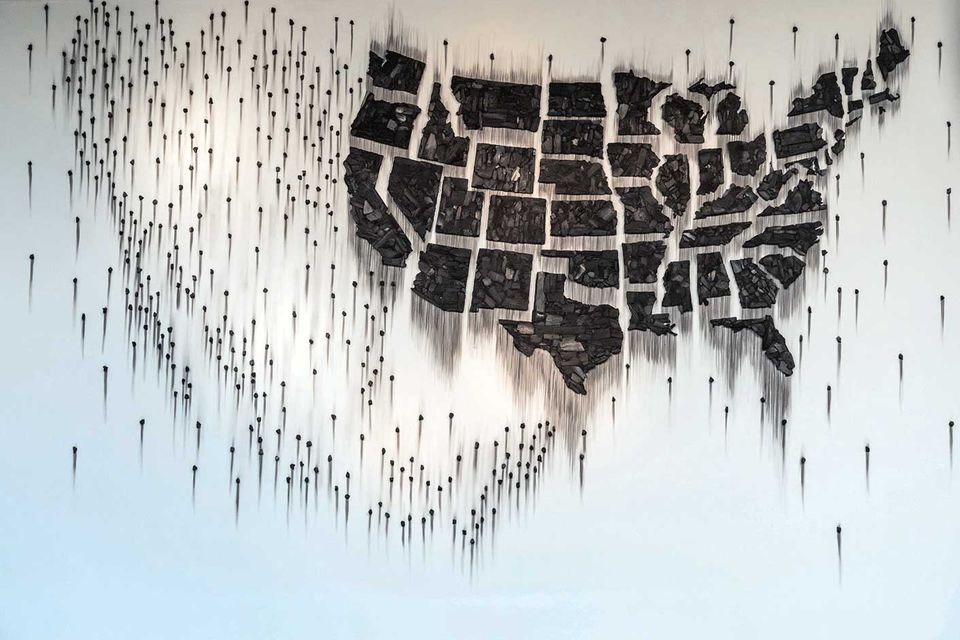 Teresita Fernández’s Fire (United States of the Americas) 3, (2017) is made from lumps of charcoal Courtesy of the artist and Lehmann Maupin

You had one of your first big public installations at the Museum of Contemporary Art, North Miami.

In 1996, I was part of the inaugural exhibition at what was then referred to as North Miami MoCA. I created a site-specific installation that looked like an empty swimming pool. It referenced a design by the Austrian architect Adolf Loos for a house that was never built for Josephine Baker. It was an installation that you could walk inside of… it was immersive and had windows and reflections. It was about this idea of a voyeuristic or a narcissistic gaze, and different ways of looking at yourself and at one another. So, in a roundabout way, even though the work was very much rooted in feminist architecture, I was already thinking about place and landscape.

The audience becomes an integral part of your work, especially in these large-scale installations.

Yes, absolutely. In fact, in the early days, when my work looked more architectural, people would often ask about my relationship to architecture, or if I was an architect or had studied architecture. I didn’t. I was very much a sculptor, a conceptual artist, whose practice was rooted in sculpture. But I always said that my connection to architecture had to do with human scale. It had to do with that immersive component, of you as a viewer being immersed in a spatial context and negotiating that.

Miami was built on the labour of Bahamians, Haitians and Cubans. So, this expansive sense of a Caribbean presence in the city goes back a long way.

One of these early immersive installations, Borrowed Landscape (1988), that was part of your residency at Artpace in San Antonio, Texas, is in the current show.

Yes. The piece consists of five sculptural volumes made out of fabric, wood, drawing and artificial light. They reference 17th-century formal gardens, as well as Japanese traditional gardening techniques that have to do with distal cues. The idea of unravelling a space by tracing the geometric patterns with your moving body, which is essentially what you do when you’re moving through one of those shaped parterre hedges at places such as Versailles or the Château de Vaux-le-Vicomte. I hadn’t seen the piece for 20 years, so it was a delightful moment to be able to pull it out of storage and install it again. 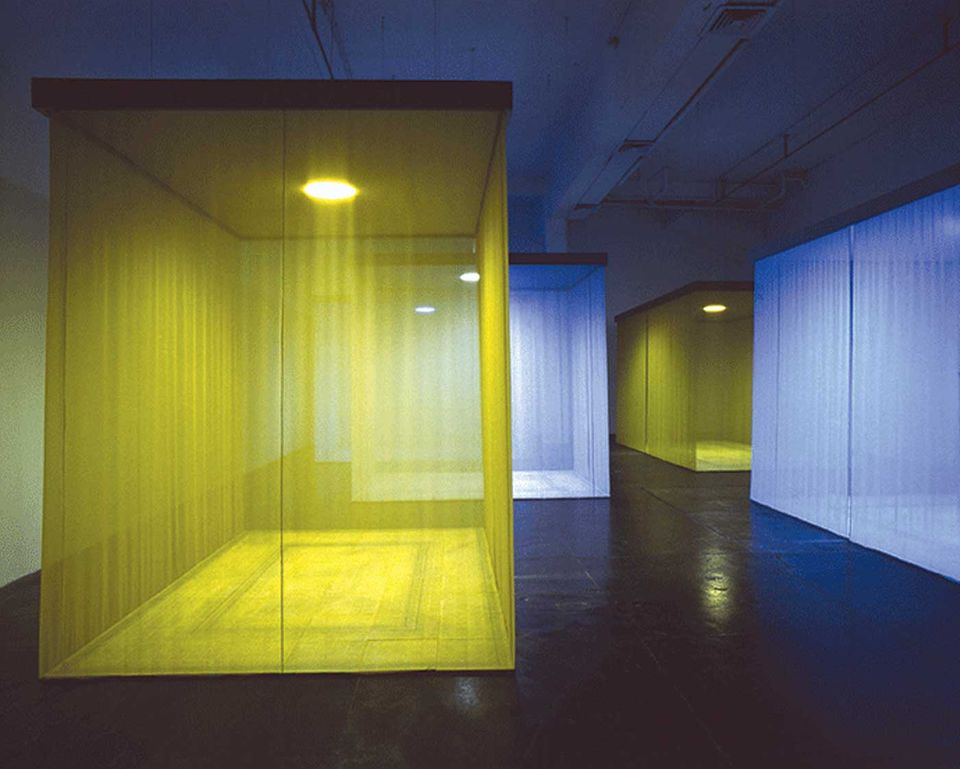 What is it like revisiting some of those early works?

It’s a kind of exercise in mining one’s past. In some cases, I was pleasantly surprised and found works in the show that felt very fresh and connected to the work I’m doing now, especially conceptually.

I was also surprised to see how well some of them had held up. I’m not talking about their physical conditions, but their kind of laser focus on specific themes that are still important to me. And how, as a young artist, I was very much unravelling these notions of the viewer navigating and way-finding on all of these different levels that are physical, and immersive, like you mentioned before, but also metaphorical and poetic. They have a lot to do with imagining and projecting oneself into different scenarios and spaces.

In this exhibition, I’ve used the landscape of the gallery. It’s a series of big gallery spaces, almost a kind of landscape that you’re traversing, like a journey.

So, I’ve taken a lot of old works, arranged sort of by period of time, but also by themes—such as subterranean, nocturnal, radiance, different sorts of visual cues. I’ve arranged them so that they’re installations made out of a lot of different individual works. They’ve never been seen in that way.

You might walk into a room and walk underneath the piece Vertigo (sotto in su) (2007) that is suspended over your head. And then you might look down onto another work on the floor—a mirror that you’re reflected in, but that also reflects everything around it. The shadows and the reflection of one work spill into the work next to it, so all of the works together are creating their own installation as well.