2015's most popular exhibitions by genre and city

We look at the shows that topped their categories

TOP TEN POST-IMPRESSIONIST & MODERN It is a third straight year at the top of this list for the Centro Cultural Banco do Brasil, which, in its different outposts, has four shows in the top ten and another in 11th place. Together with the Salvador Dalí exhibition at the Instituto Tomie Ohtake, this means that half of the top ten are Brazilian shows, all of them free. The museums have tapped into an extraordinary public appetite for tried-and-tested Modern masters—in this case, Picasso and Kandinsky as well as Dalí. With the top European shows also of perennially popular artists Matisse and Bonnard as well as the Fondation Louis Vuitton’s gathering of Modernist masterpieces in Keys to a Passion, the presence in the list of the relatively little-known artist Yasuo Kuniyoshi, a Japanese-born American painter and contemporary of Edward Hopper and Georgia O’Keeffe, is a welcome surprise. Two more US shows, of Dubuffet at MoMA and Cubism at the Met, are just outside the top ten. — Ben Luke

TOP TEN CONTEMPORARY With three shows in the top ten, the National Gallery of Victoria, Melbourne, dominates this category, after being absent from our 2014 list. Its shows of David Shrigley, Carlos Amorales and Ryan Trecartin were all free, but notably this list contains fewer non-paying exhibitions than in previous years—four, compared with eight, in 2014. 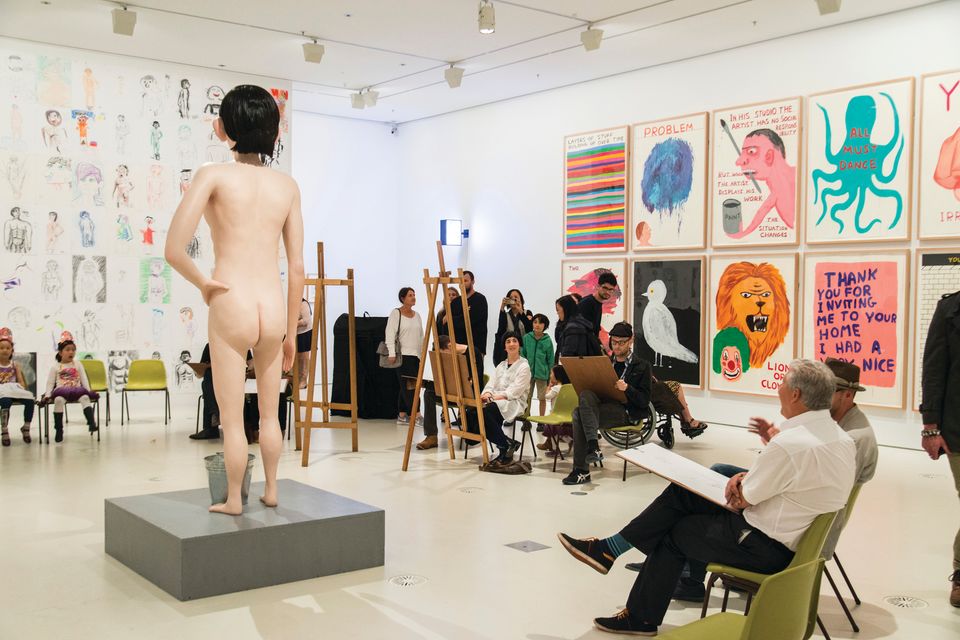 Two of the paying shows were dedicated to Jeff Koons, whose retrospective’s stop-offs in Bilbao and Paris attracted more than a million visitors between them. Indeed, it was a strong year for American or American-based artists, with Robert Gober, Jean-Michel Basquiat, Trecartin and Yoko Ono also in the top ten. Brazilian galleries continue to attract big audiences, with shows in Rio and São Paulo the seventh and eighth most popular; the Ron Mueck exhibition in São Paulo also featured in 2014’s top ten, for its showing in Rio. — Ben Luke

Visitros to the Ai Weiwei exhibition at the Royal Academy of Arts. Photo: J Ludbrook

Saatchi Gallery continues to dominate the free shows in London, but notable mention should go to the Lynette Yiadom-Boakye exhibition (2,170 a day), which was the Serpentine’s most visited show in half a decade. Henri Matisse: the Cut-outs—the number one paid show in London in our 2014 survey when it was at Tate Modern (3,907 a day)—was seen by 6,033 people a day at the Museum of Modern Art, New York, which co-organised the show. But this was not enough to beat the Metropolitan Museum of Art’s exhibition on the influence of China on Western fashion, which had 6,581 visitors a day. An American in Paris topped the bill with 4,989 visitors a day at the Centre Pompidou when the Jeff Koons retrospective rolled into town, beating Bonnard at the Musée d’Orsay and Velázquez at the Grand Palais. — José da Silva 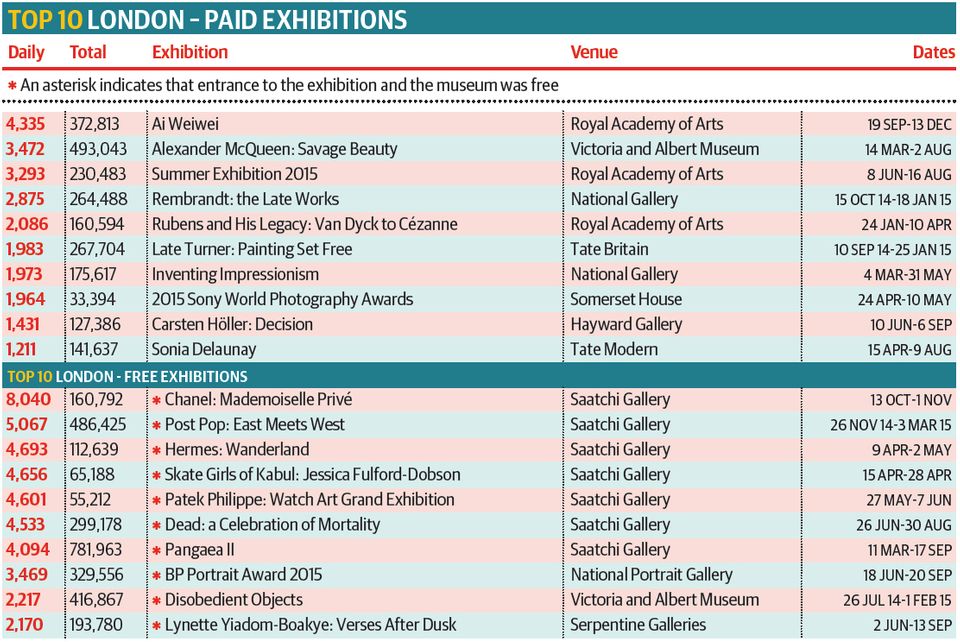 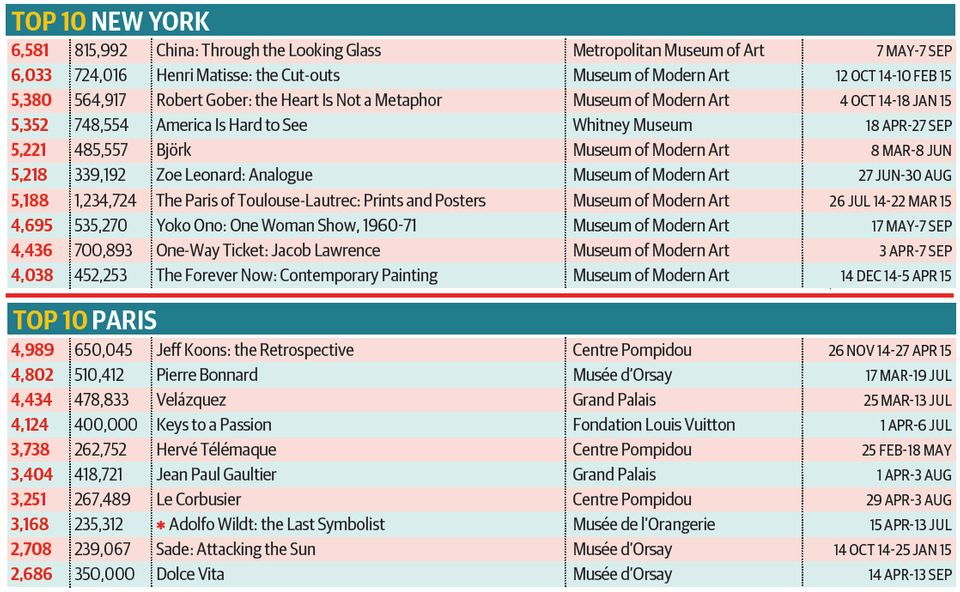 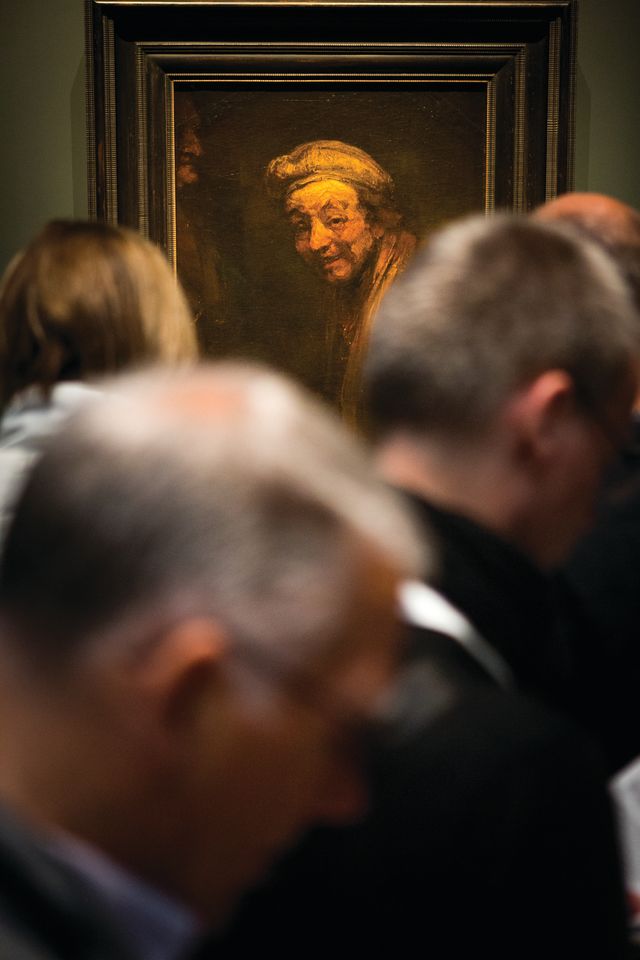 Attendance figures for Old Master exhibitions in 2015 deviate from the annual phenomenon of several top-ten shows featuring Italian Renaissance and Baroque art. Only two Italians, Leonardo da Vinci and Andrea del Sarto—the latter as a draughtsman rather than as a painter—made the cut this time. Dutch Golden Age artists also always score, but instead of the perennial Vermeer, it was Rembrandt’s turn, travelling from London to Amsterdam and with an independent appearance in Israel. Spanish artists exhibited outside Spain seldom make it, so Velázquez is the real star, pulling crowds to the travelling monographic show in Paris and Vienna. That three drawings exhibitions should be so popular is a surprise (as drawings are much more “difficult” than paintings), but that 2,000 people a day should flock to see 30 drawings (albeit by first-rate artists) at the Albertina, Vienna—not a centre of mass tourism—is a real puzzle. — Donald Lee

TOP TEN 19TH-CENTURY ART That the Impressionists should draw more than 10,000 visitors a day in Tokyo comes as no surprise as they are a mania with the Japanese, but it raises serious questions about the nature of viewing art in sardine-tin-like conditions. The paucity of French 19th-century art in Japanese and Brazilian public collections also contributes to its popularity in those countries and elsewh ere outside France. 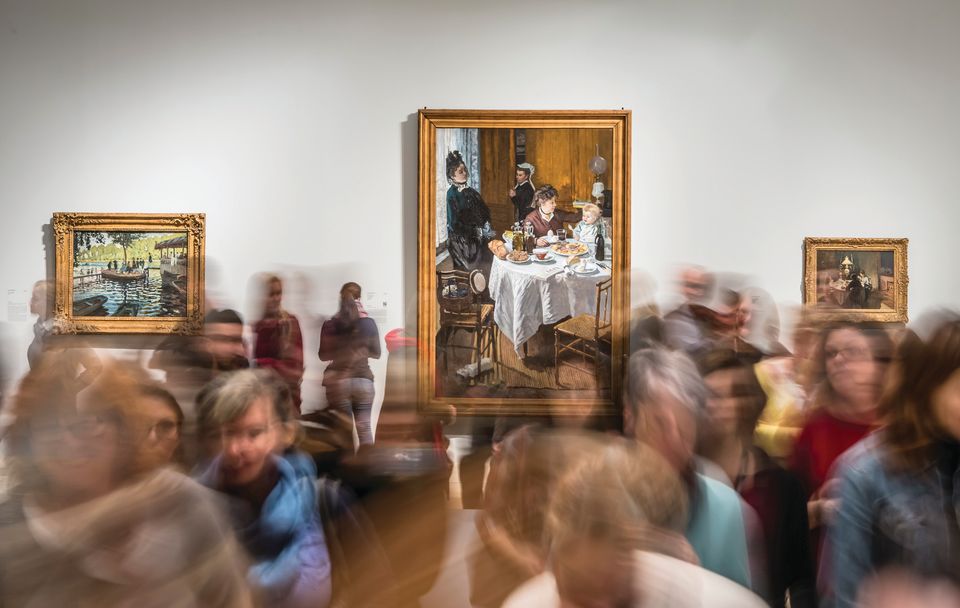 In a category normally dominated by French artists, it is noteworthy that half of the top ten exhibitions were of works by Sargent, Turner and the Pre-Raphaelites, albeit exclusively in the Anglo-Saxophone world. — Donald Lee