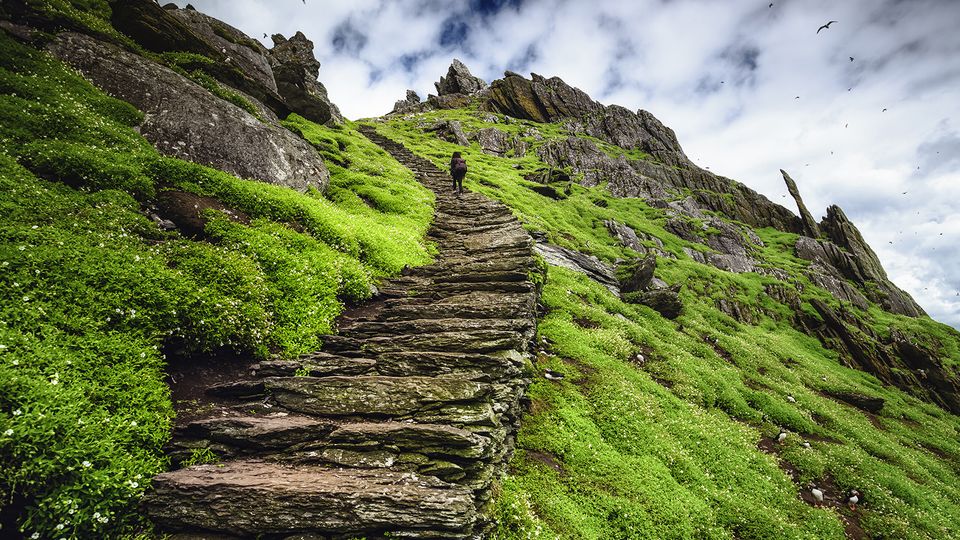 Use the Force: the only way to reach the ruins of the monastery at the top of Skellig Michael are the 600 granite steps built by monks when they first arrived there some time between the sixth and eight centuries Photo: Caspar Diederik

A furious row has broken out over access to a Unesco World Heritage site that was used as a filming location for Star Wars: The Force Awakens.

Skellig Michael, a craggy island with the remains of a medieval monastery at its summit, rises out of the Atlantic Ocean 11km off the west coast of Ireland. It served as the backdrop for the final scene of the blockbuster movie: it is where Rey, the film’s heroine, finally finds Luke Skywalker after a galaxy-wide search.

Since the film’s release last December, businesses in Portmagee, County Kerry, the departure point for tourist boats to the remote island, say there has been a massive surge of interest in visiting Skellig Michael and in bookings for hotels on the mainland. 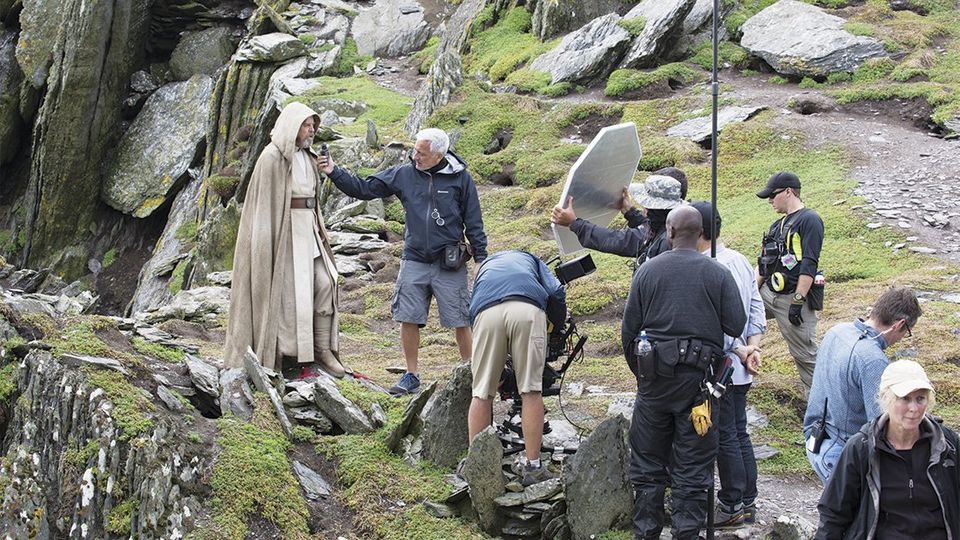 But the many Star Wars fans that hope to visit the site are likely to be disappointed. Skellig Michael is only accessible from May to October and there is a strict cap of 180 visitors per day. To make matters worse, up to half of the open days are lost every year due to bad weather.

Boatmen who hold licences to ferry tourists to Skellig Michael are now calling on the Office for Public Works (OPW), which administers the site, to extend the tourist season by opening the island from April to November.

“Every boatman, bed and breakfast owner, and hotel in Portmagee feels the same way,” says Dermot Walsh, one of the 15 boatmen who hold a licence to take visitors to Skellig Michael. “People are ringing us every day wanting to book.” 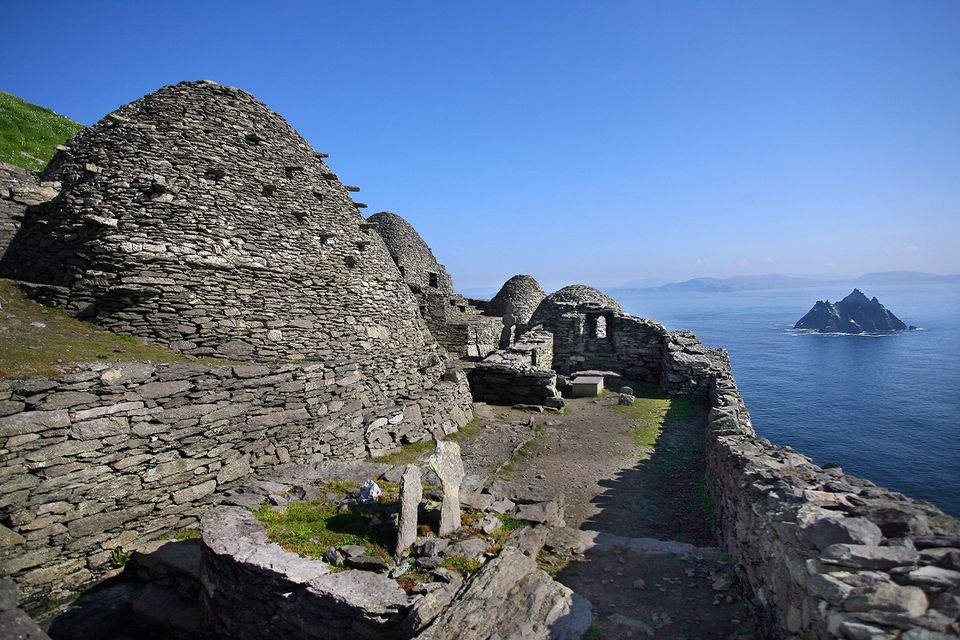 A group of stone beehive huts where the monks slept on Skellig Michael, the terraces they built to enclose their vegetable gardens, and even the monastic latrine, are all remarkably well preserved Photo: Caspar Diederik

Joe Roddy, another boatmen, says he has been ferrying tourists there for 40 years and that the site used to open six weeks earlier, at Easter. A third boatman who asked not to be named says: “The OPW say they cut the season for health and safety reasons but that’s not true. It’s a budget issue. It’s very hard for us boatmen to make a living. The OPW have taken 70 days off our season. They have decimated the area. The people on the West Coast of Ireland have been forgotten by politicians.”

Despite the demand, Frank Shalvey of the OPW says there are no plans to extend the site’s opening and he denies that access has been restricted to cut costs. “Access to Skellig Michael is not straightforward,” he says. The only way to reach the ruins of the monastery at the top of the island are the 600 granite steps built by monks when they first arrived there some time between the sixth and eight centuries. “It is quite difficult for people, there is no elevator, no handrail. And there have been fatalities: in 2009 two visitors fell from the steps and died from their head injuries,” Shalvey says. The OPW installs three rangers trained in emergency procedures on Skellig Michael during the open season, but outside medical help can take up to 90 minutes to arrive from the mainland.

To ensure that Skellig Michael is as safe as it can be, the OPW sends a crew out every year before the public opening to fix dislodged steps, even the paths, and check the stability of overhanging rocks. This maintenance work can take up to three weeks, says Shalvey and because of the stormy weather, OPW crews are only able to access the island in April. 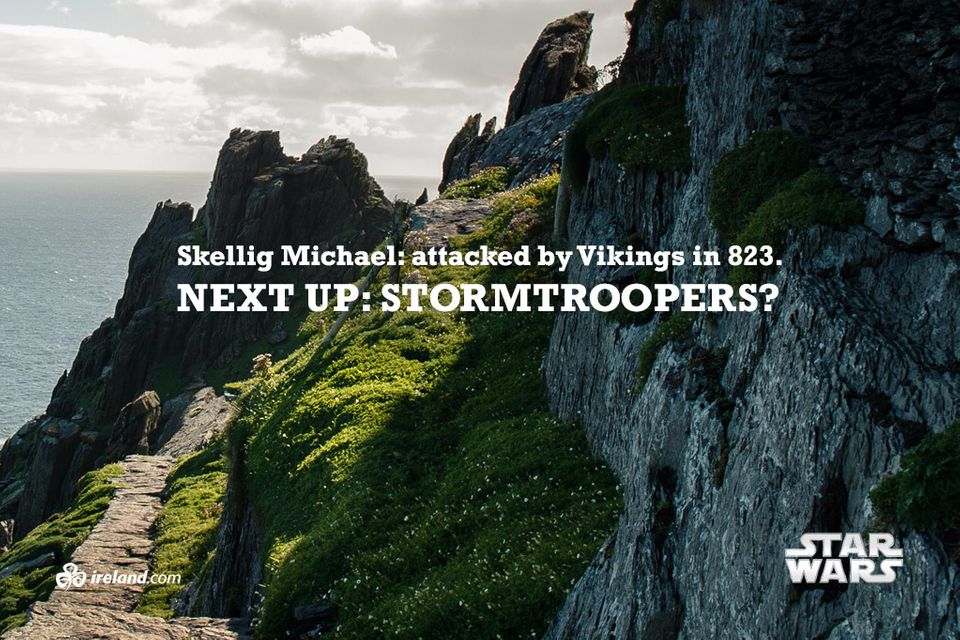 The demand to visit Skellig Michael outweighs these challenges the area’s business owners argue. “People will be coming to Portmagee from as far away as America and even Australia and they will be so disappointed if they can’t go out there,” says Gerard Kennedy, the owner of the Moorings Guesthouse in Portmagee. “The season really does need to be extended.”

Kennedy says bookings at his guesthouse are up 50% following the release of the film and he has now launched a Star Wars accommodation package—two nights bed and breakfast, a tour to local pre-production sites, the inside story of the making of the movie, plus t-shirt for €149—which he says is selling “extraordinarily well”. He has also posted a video of Star Wars actor Mark Hamill, who plays Luke Skywalker, pulling a pint of Guinness at the Moorings pub.

While businesses in Portmagee want more visitors to be allowed to Skellig Michael, conservationists and island tour guides want fewer. As well as its ancient architectural remains, the site is home to colonies of puffins, Manx shearwaters and storm petrels. Some birds were inadvertently killed by the Star Wars production crew during the filming, which led to stricter guidelines being imposed. 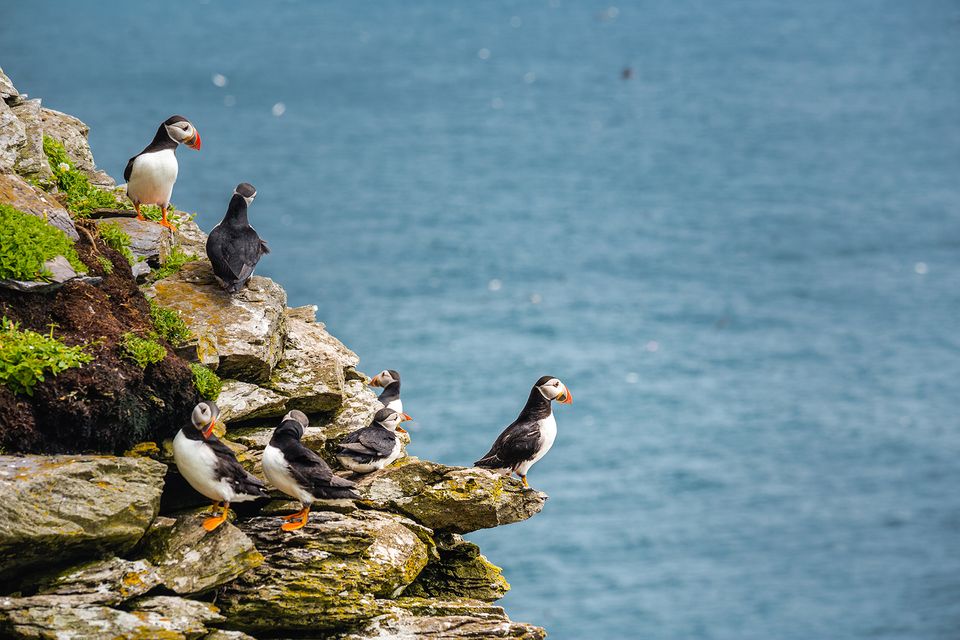 As well as its ancient architectural remains, the site is home to colonies of puffins, Manx shearwaters and storm petrels Photo: Caspar Diederik

“The marketing initiatives that are out there in relation to Star Wars and Skellig Michael are the biggest threat the island has encountered in the last century,” Claire O’Halloran, a local tour guide, told CBC radio in Ireland. The ecosystem on the island is “extremely fragile,” she says, and filming there should never have been allowed.

When Unesco listed Skellig Michael as a World Heritage Site in 1996 it described it as a “unique example of an early religious settlement… which illustrates as no other site can, the extremes of Christian monasticism characterising much of North Africa, the Near East, and Europe”.

The monastery at the island’s summit was continuously occupied until the 12th century. A group of stone beehive huts where the monks slept, the terraces they built to enclose their vegetable gardens, and even the monastic latrine, are all remarkably well preserved. The site’s remoteness “has allowed an exceptional state of preservation and, until recently, hardly any visitors,” Unesco said in its 1996 report. That, at least, is set to change.