A monument to the Holocaust in textile: Anni Albers’s Six Prayers

On this week’s podcast, we hear about the solemn memorial at the heart of Tate Modern’s survey of the Bauhaus artist 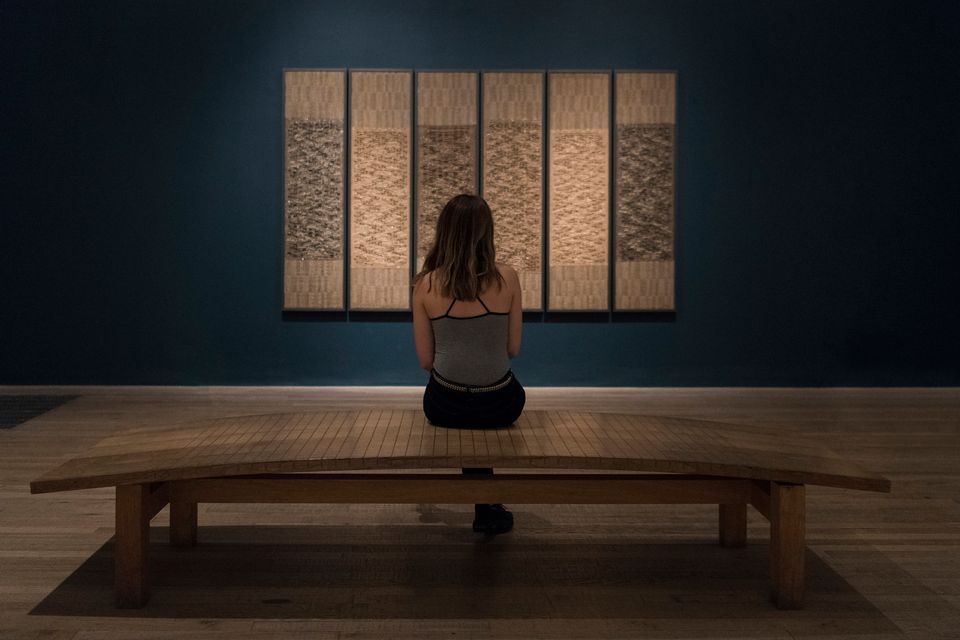 At the heart of the beautifully designed, light and airy exhibition of Anni Albers’s work at Tate Modern in London (until 27 January 2019), is a solemn, darker space. Here, you find Six Prayers (1966-67), a six-part work commissioned by the Jewish Museum in New York to memorialise the six million Jews who died in the Holocaust.

In the latest edition of The Art Newspaper podcast, we hear about the six panels, whose presence in the exhibition is “a rare chance to see this work that has been very little exhibited”, according to Briony Fer, the co-curator of the exhibition. Six Prayers is the largest of what Albers called her “pictorial weavings”, works that were intended to be individual works of art, rather than to be mass produced as textiles or to act as architecture, like other works in the exhibition.

“It shows her thinking on a much larger scale than we might have expected, and using ideas about writing and pictographic forms and hieroglyphic forms, to imagine a monument in textile, a monument that’s haptic as well as optical,” Fer says. “You can really feel those textures… It’s as if they’re six prayer rolls, and she’s using and drawing on certain conventions within the Jewish tradition. It’s the one instance in her work where we see her really engaging with the question of Jewishness. She is a Jewish woman and Josef Albers was not Jewish, but obviously this—and not only the closing down of the Bauhaus—was the reason why it was essential for the Albers to leave Germany.” They left in 1933 and the US was their home for the rest of their lives.

It’s the one instance in her work where we see her really engaging with the question of Jewishness.

As Charles Darwent, the author of the new biography Josef Albers: Life and Work tells us on the podcast, Anni Albers was from a family that was “the nearest thing that Jewish Germany came to aristocracy. Her mother Toni Ullstein was from the Ullstein dynasty of publishers: they published things like the Berliner Zeitung and they published [Erich Maria Remarque’s 1928 novel] All Quiet on the Western Front; quite a serious family.” Fittingly, given Anni’s later career, “they really made their money by selling sewing patterns—schnittmuster—that’s where the real money was,” Darwent says. “So she grew up with an Irish governess and butlers and nannies.” A far cry from the poor conditions Albers would later encounter in her Bauhaus days in Weimar in the 1920s.

Anni had in fact been baptised in the Protestant church and referred to herself as Jewish only “in the Hitler sense”. But Six Prayers is shown among other works she did for synagogues as part of “a really very forward-thinking architectural movement in synagogue design”, Fer says. She adds: “There’s something very abstract about the script and the scriptural nature of it, but it’s deliberately illegible, it’s not as if we are invited to read the message… It’s a very enigmatic work. It has these metallic threads, so it has a mystical, contemplative effect. So it’s a much quieter space in the exhibition, to really look long and hard.”

You can hear the rest of the interviews with Fer and Darwent, as well as interview with Nicholas Fox Weber, the director of the Josef and Anni Albers Foundation, on The Art Newspaper Podcast, which you can also find on iTunes, Soundcloud and TuneIn. The podcast also includes a lengthy investigation into the Banksy stunt at Sotheby’s on 5 October, including a conversation with Jonathan Cheung from Maddox Gallery, who was bidding for the painting in the auction room.