A parody of data mining: Kenneth Baker on Christian Marclay at Fraenkel Gallery

In American parlance, "street photography" refers to the snapshot glosses on urban sociology by camera-workers such as William Klein, Garry Winogrand and Lee Friedlander. But Christian Marclay, an American-born artist educated in Europe and now resident in London, narrows and deepens the term's meaning in a series of video animations on view for the first time anywhere at the Fraenkel Gallery in San Francisco. (In July, they will travel to Les Rencontres de la Photographie in Arles, France.)

Looped, soundless video projections are the presentational mode of these "animations," as Marclay calls them, but he thinks of them and composes them as sequenced photographs.

Rather than tatters of strangers' unrehearsed behavior, his pictures capture discarded evidence of their habits: smoking, drinking, gum-chewing and littering.

Looking down at the streets on his daily walks in London, Marclay noticed certain sorts of litter preponderating and, in a touchless reprise of found object-scavenging, began to collect them with his camera. He sorted them by category and, from archives of between a couple hundred and a couple thousand images, set about ordering them in endlessly repeating sequences, each lasting a minute or two. His seemingly straightforward approach has yielded a startling range of allusions and insinuations, seemingly little-contrived.

Lids and Straws (One Minute) (2016) lasts precisely a minute. It surveys drinking cup lids penetrated by flattened straws, centered on screen, each straw angled relative its predecessor so that—each shot lasting one second—it traces the ticks of a second hand.

This self-timing piece commemorates Marclay's master-work, the 24-hour chronometric montage epic The Clock (2010). It also announces a theme of the new animations: rhythms of addictive consumption—of sugar, alcohol, tobacco, even methamphetamines—as the backbeat of unself-conscious urban life. (Only after he began collecting snaps of Q-tips—or "Cotton Buds," as Britons call them—did Marclay learn that they appear so often on the streets because they serve as meth addicts' paraphernalia.) 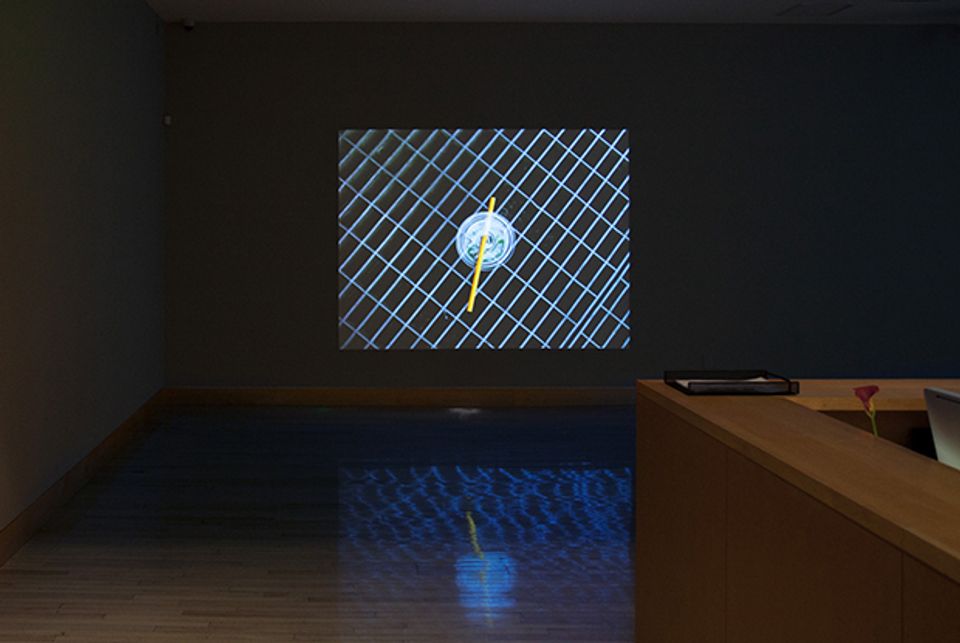 In it, blobs of chewed gum mashed onto pavements proliferate and dance through various arrays with jerky editing reminiscent of primitive astral cinema. The pieces of gum merge and split like some instructional slideshow illustrating cell division. The blobs expand and morph, winking out references to Jean Fautrier, Jean Dubuffet and Irving Penn's photographs of similar subjects. The work hints at the demotic, event witless common culture from which creative expression emerges.

Chewing Gum also brings the narrative potential of Marclay's art to the fore, an aspect that pinnacles in Cigarettes (2016).

Here an all but motionless cigarette sits against a juddering ground, the brand markings changing second by second, the cigarette growing a tail of ash, then seeming to restore itself nearly to full length, intact, before fraying into unburnt tobacco fibers.

Literary references appear seldom in Marclay's work, but here viewers may find it hard to keep out of mind Italo Svevo's, Simon Gray's or Scott McEwen's comical accounts of the agonies of quitting smoking.

The frame rates of Marclay's animations vary from one per second (Lids and Straws, both from 2016) to 15 per second in the silent drinkers' anthem, Bottle Caps.

Surprisingly, the weak link in Marclay's new series is Straws, the piece most obviously pertinent to music, which is the inspiration or medium for some of his most inventive work.

In Straws, a multi-coloured sequence of fallen drinking straws dance, at times appearing to duel, at times to woo and finally to play like soundless, abstracted drumsticks. Yet nothing else in the exhibition so calls to mind the arbitrary silliness with which products or product-symbols are made to jive around, by means similar to Marclay's, in low-budget television commercials.

Marclay's magic frequently consists of making something out of almost nothing by taking something he's noticed to an extreme. Straws may hew too close to nothing.

Still, the ensemble of works at Fraenkel suggests a sort of parody of data mining by old-fashioned means, even as it excavates an informal stratum of urban existence in which every viewer will feel implicated—maybe even a little guiltily. Too little contemporary art can support such a claim.

Kenneth Baker retired in 2015 after 30 years as resident art critic for The San Francisco Chronicle. He is an Art Newspaper correspondent based in San Francisco.