Object lessons: a petite Magritte, a zombie infestation by a cult favourite and a Navajo weaving chosen by an oil heiress 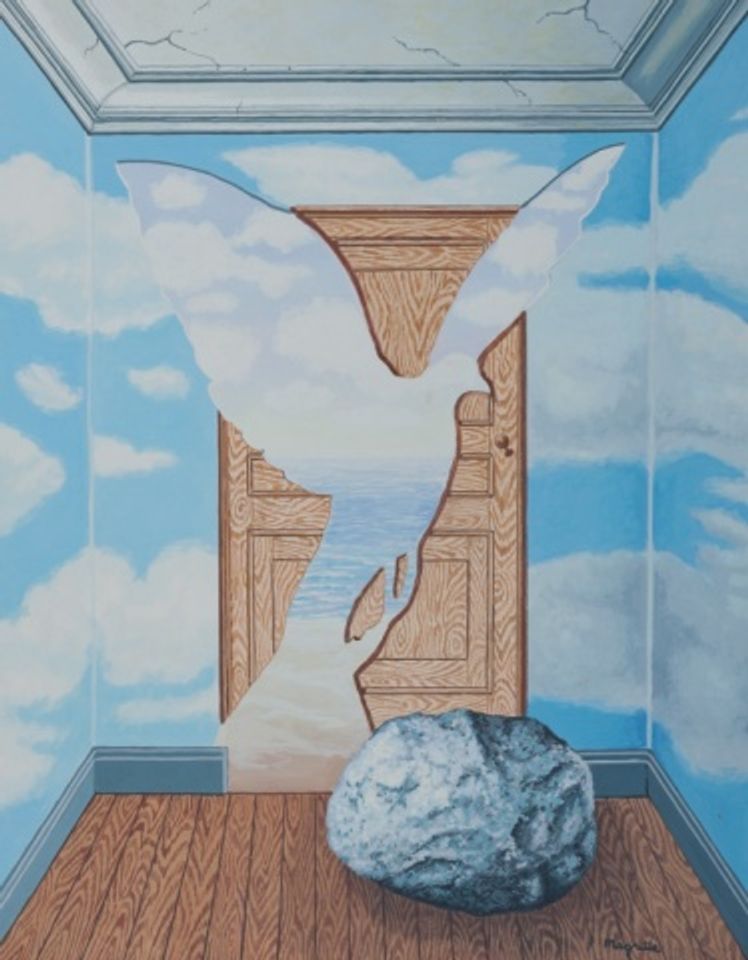 This small gouache on paper by the Belgian Surrealist contains some of his most famous motifs, including the "dove of peace" at the centre and an anchored boulder, which, like his apples, wooden frames, clouds and blue skies, holds symbolic meaning. The work has been consigned by a Los Angeles private collector and originally belonged to Miguel Lopez Pumajero, a late Colombian ambassador to the US, who acquired it from New York's Julien Levy Gallery, a major avenue for Surrealist and avant-garde artists of the 1930s and 40s. Levy mounted Magritte's first solo exhibition in the US in 1936, the same year that the artist was included in the Museum of Modern Art's landmark exhibition of Dada and Surrealist art. The unframed work "has generated a lot of interest as it incorporates so many of the artist's favourite subjects and features a scene that is so beautifully executed", according to a specialist at the auction house. Sotheby's New York scored a record price for a gouache on paper by Magritte in 2015 with Le maître d'école (1955), which fetched around $6.7m; last year, Christie's New York set a new auction high for the artist with the oil on canvas L'empire des lumières (1949), which achieved around $20.6m (est $14m-$18m). 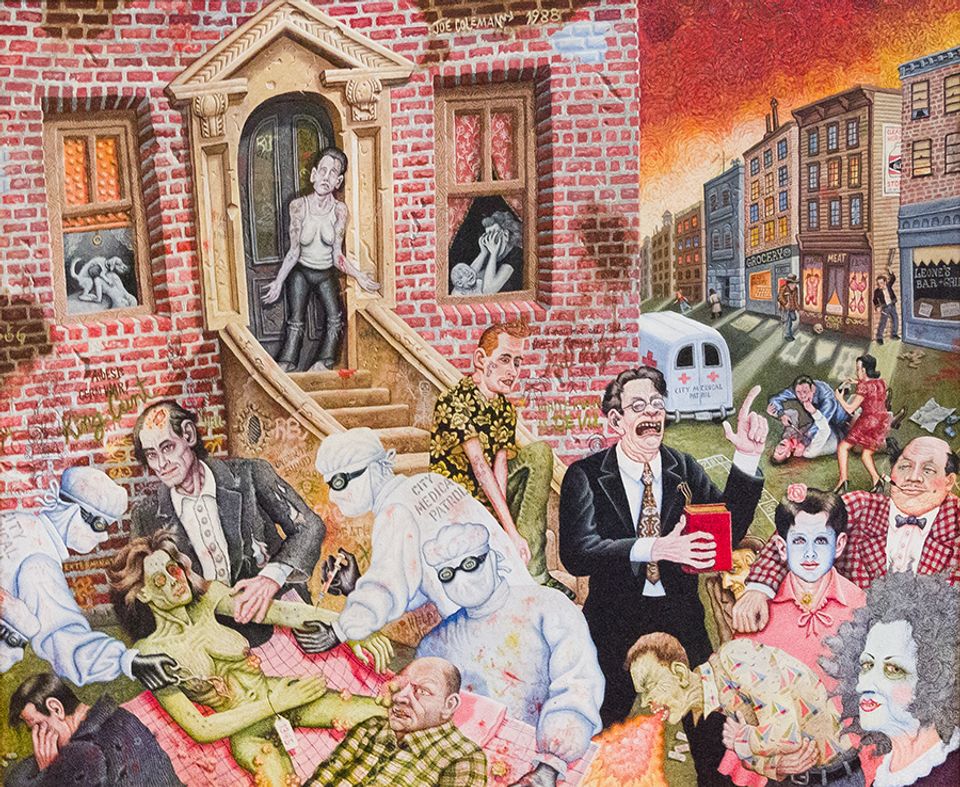 Hailing from the noted Outsider art collection of Howard and Judith Tullman, this acrylic on masonite by the Chicago artist Joe Coleman shows his "typical intricately grotesque fashion-a zombie disease outbreak ravishing a gritty urban street [that] perhaps self-referentially eludes to the scourge of heroin addiction that Coleman battled in the 1980s", says Zachary Wirsum, the auction house's head of sales. The artist, celebrated for detailed narrative paintings and portraits, is "to some degree an artist of the Outsider tradition", adds Wirsum, "but has been embraced by the mainstream, with a clientele of rock, movie and art star patrons." With Coleman executing these detailed works with a single-haired paintbrush under the magnification of a jeweller's loupe, "the result is reminiscent of a Flemish [Old Master] illustrating a Mad Magazine fold-in", says Wirsum. Christie's New York set the artist's auction record in 2011 with a later and more complex work, which earned $98,500. 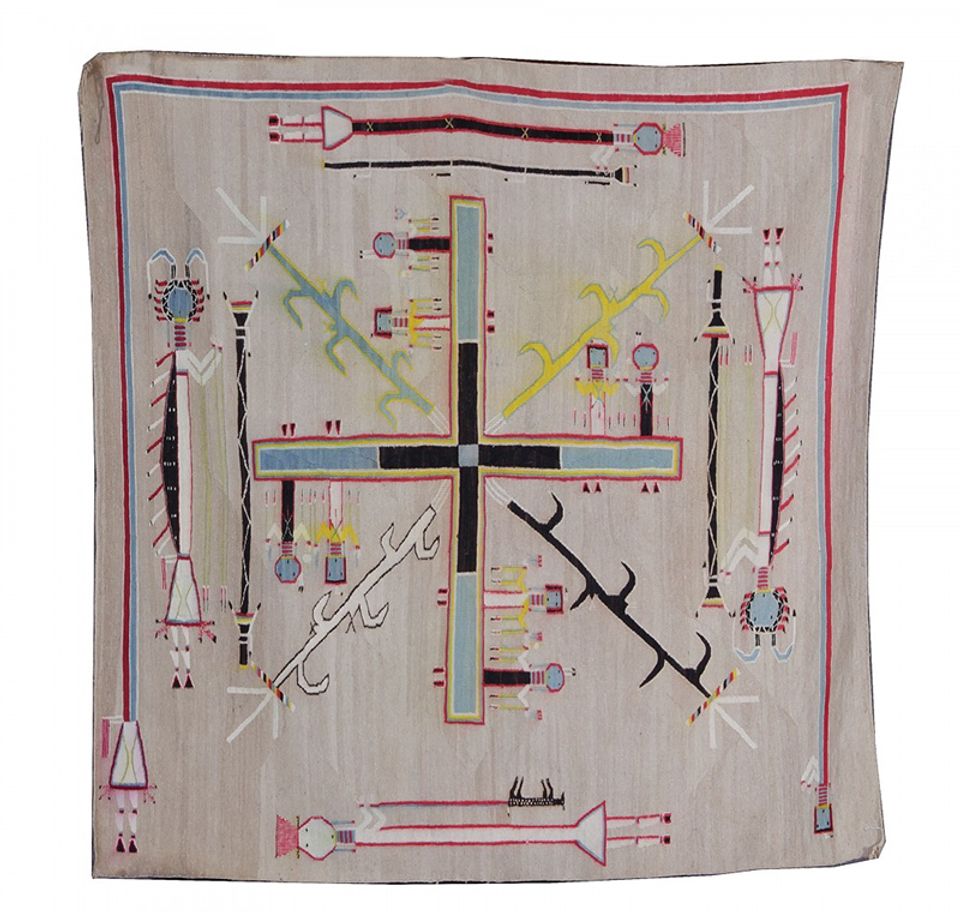 This hand-spun wool weaving comes from the collection of the Standard Oil heiress and philanthropist Millicent Rogers, who acquired it for Turtle Walk, a 71-acre home she built in Taos, New Mexico, in 1947. The sandpainting on top features a "whirling log" design, a Navajo symbol that denotes abundance, healing and luck; this example relates to the Nightway Chant, a days-long ceremony to restore harmony and health to a member of the tribe. The work was likely created by Hosteen Klah, a Navajo medicine man who defied convention by becoming a master weaver, a role typically reserved for women, or his niece Gladys Manuelito. A similar weaving by Manuelito produced in the early 1950s made around $27,000 at Cowan's Auctions of Cincinnati in 2015. According to Kinga Bender, Charlton Hall's fine and decorative art director, Rogers "was not known to collect Native American art until the last decades of her life" but she was deeply connected to the Southwest, and died there in 1953. Three years later, her sons founded a museum in Taos in her name to display Native American, Hispanic and Euro-American art from her home. Last year, Turtle Walk, which had been occupied on and off by relatives for decades, sold for $2.9m to an overseas couple allegedly interested in preserving historic sites.