A world away from the rest: David D'Arcy on Paula-Modersohn Becker at Galerie St. Etienne

Paula Modersohn-Becker (1876-1907) is a painter whose work still falls short of recognition in the US, despite fame in Germany and a back-story that’s overloaded with drama.

Her paintings and drawings, now on view at Galerie St. Etienne in New York, blend the austere landscape of northern Germany with the palette of Parisian post-Impressionism. Portraits by Modersohn-Becker are stark and bold, but with an improbable warmth. Her female nudes carry an additional element of surprise, since nudes of women, painted by women, were not regularly shown in her lifetime, and were rarely painted.

Then there is her short life. Paula Becker was born in Dresden to a father who urged her to become a teacher, since painting had never been enough to support a woman. She gravitated to the anti-academic artists’ community of Worpswede, outside Bremen, where she dispensed with the sentimentality of her teacher, Heinrich Vogeler, and made studies of empty meadows and solitary trees. In 1901, she married Otto Modersohn, an artist 15 years older, but was drawn more to Paris and to the colors of Paul Cézanne and Paul Gauguin. Her ambitions and desires filled her journals from the age of 14 and her later correspondence with the poet Rainer Maria Rilke (whom she also painted) is now a classic text about a frustrated path to fulfillment.

Trips to Paris filled her with inspiration but left her without funds. In early 1907, at the age of 30, Modersohn-Becker became pregnant after the belated consummation of her marriage to Modersohn. Shortly after giving birth in November, she died of an embolism at 31. A year later, Rilke poured his grief into the poem Requiem for a Friend, which was published in 1909.

Seen together—a rare opportunity in the US—Modersohn-Becker’s works are an opportunity for anyone interested her short life as a painter and her role as a woman in what was a closed men’s world.

A self-portrait from around 1903 at Galerie St. Etienne shows her with a quiet smile of delight, a mischievous indication that the painter knows far more than what she might admit. There is none of the studied, somber seriousness of the artist preparing for a grand destiny. Inspiration came from a source that Modersohn-Becker often credited, the Fayum portraits of ancient Egypt that were on view in European museums in the late 19th century. In some of those portraits, we also find the colours that Henri Matisse began to discover in Morocco in 1912. 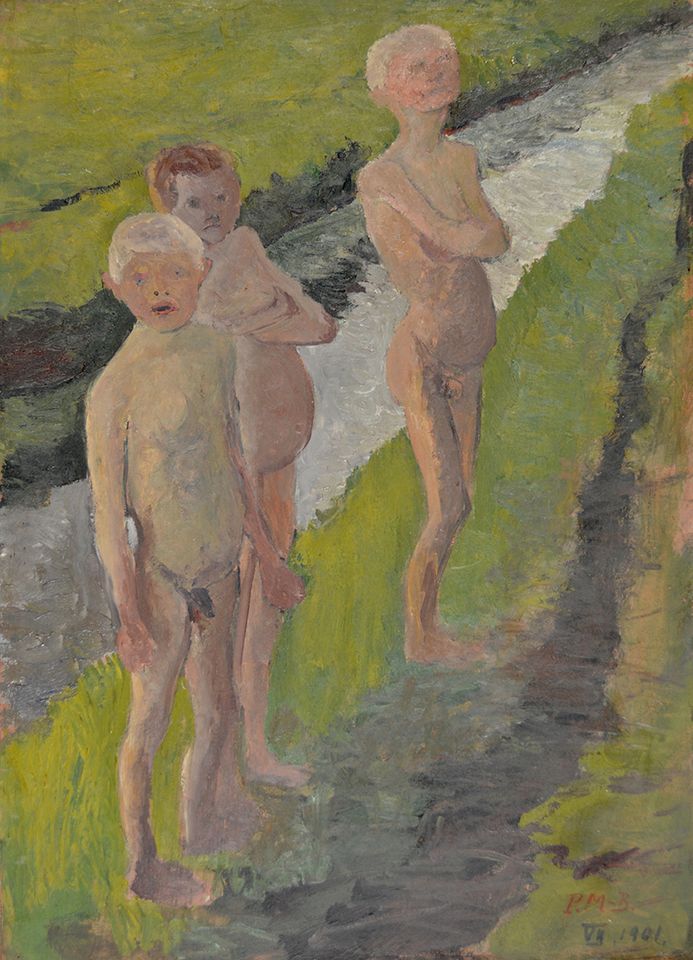 Modersohn-Becker also painted nude self-portraits, although fewer than hype might justify. Yet one such picture that is not in the New York show, showing her from the waist up wearing only a necklace (possibly a playful homage to Titian’s Young Woman with a Fur Coat of around 1535), suggests oneness with her earth-toned surroundings that could have been borrowed from Gauguin.  Absent from this picture, and from her landscapes, is any feel of exoticism.

Exotic is not the word that comes to mind in scenes of the windswept bogs of Worpswede. Figures of three nude boys by a canal in a green field (Three Bathing Boys By the Canal, 1901) are spectral and cadaverous, bolts of flesh surrounded by scrub vegetation, anything but the graceful bathers of Cézanne or of Gauguin’s seductive Tahitian girls. Modersohn-Becker has taken cues from those artists, but her eye and her subjects are a world away. There is also a confident looseness in the brushwork of her scene, all the more apparent after one considers a huge drawing on paper nearby that shows several boys depicted with rigorous academic precision.

Her Reclining Female Nude (1905-6) is a case in point. Her serene model seems unaffected by anyone’s gaze, and Modersohn-Becker has piled so much impasto on the figure’s torso that the body seems incised in relief. It’s a daring turn—the nude and the impasto—and she may once again be borrowing from classic friezes of antiquity.

Children were frequent subjects because they were more affordable models than adults, but they have a foreboding when Modersohn-Becker paints them. She would die from a complication that arose from being bed-ridden after giving birth, and it’s tempting to link her fate to the grimness of her surroundings and to a calculated decision, gone awry, to fulfill herself by becoming a mother. It makes for a weepy ending to a courageous life. Modersohn-Becker at her death was chillingly unsentimental and as disarming as any of her self-portraits.

Was she the first Modern female artist, as Diane Radycki suggests in her recent biography, Paula Modersohn-Becker: The First Modern Woman Artist? In rural Worpswede, Modersohn-Becker resisted walking in lockstep with the mandate for “the painting of modern life” that Édouard Manet and Berthe Morisot followed. Yet Modersohn-Becker’s experiments and her ambitions make her as modern as any artist of her time.

David D’Arcy is a correspondent for The Art Newspaper.