A year after George Floyd’s death, art memorials are at a crossroads

Efforts to preserve murals and street art are growing, as are threats to sites around the country, including the intersection where Floyd was killed 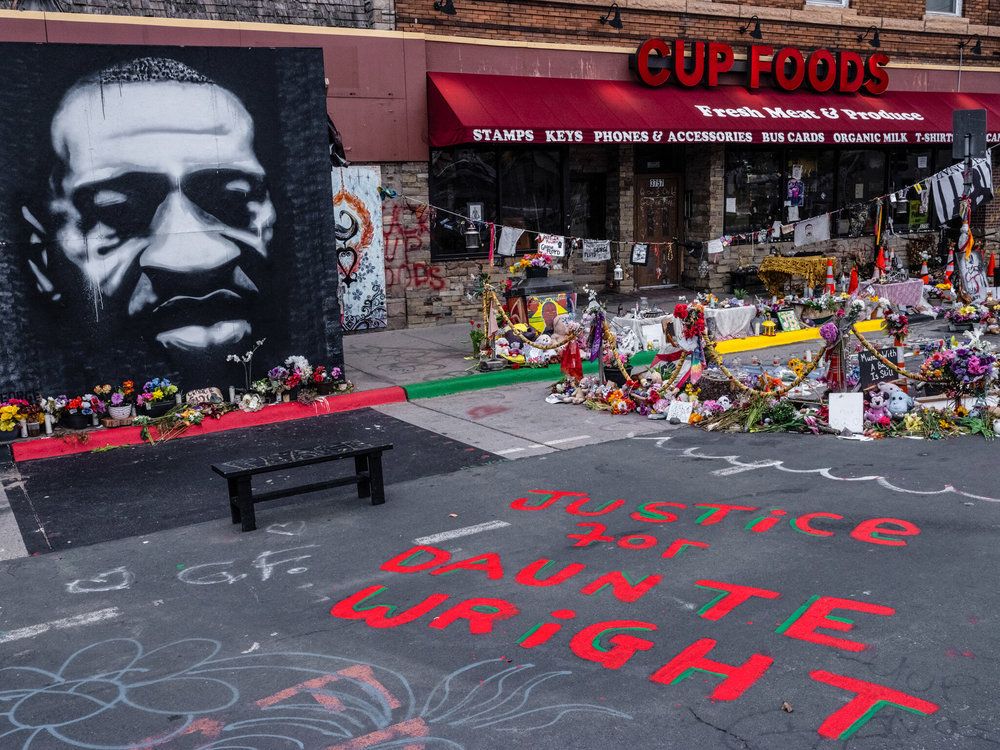 "Justice for Daunte Wright" is written on the street outside of Cup Foods, where George Floyd was murdered and a community-built memorial has taken over the intersection Courtesy of the George Floyd and Anti-Racist Street Art database

When George Floyd was killed one year ago, protests against police violence erupted on the streets, first in Minneapolis, and soon across the country. Murals dedicated to Floyd and other Black lives lost also started to appear on the streets, a spontaneous creative act to memorise victims, call for justice and celebrate the power of community. Today, efforts to preserve and document these urgent outpourings of street art are growing, including a crowdsourced online database run by the University of St Thomas in Saint Paul.

The university’s George Floyd and Anti-Racist Street Art open access database now includes more than 2,000 images and descriptions of works, submitted by users from around the world. The project started last June as a way to record “some of the cultural production inspired by the moment, and keep it in a place people can come back and look at it for as long as the computers are running,” said professor Todd Lawrence, who runs the Urban Art Mapping project with fellow faculty Paul Lorah and Heather Shirey, in a university news release. “This is a way we’ll be able to revisit this moment and continue to think about what’s important.”

Recent submissions include the words “Justice for Daunte Wright”, referring to the 20-year-old man killed in April by police in Brooklyn Center, Minnesota, painted on the asphalt in front of a now famous portrait of George Floyd by the street artist Peyton Scott Russell, installed outside the Cup Foods convenience store where the 46-year-old was killed. Another vibrant mural painted on the side of the gallery Monster Children in LA’s Chinatown by the artist Lauren YS urges, “Stop Asian Hate” and “Protect Our Elders”, reflecting the rise of violence against Asians in the past year.

Meanwhile instances of vandalism have broken out at some sites, such as racist slurs written on a mural of Floyd painted in his hometown of Houston. Daniel Anguilu, the artist who painted the work, said he has had to restore it three times. In one shocking incident this weekend, an axe-wielding man attacked the memorials and protest art installed at the intersection of East 38th Street and Chicago Avenue South in Minneapolis, now known as George Floyd Square. Repairs have already been made, and the site will serve as a gathering point on 25 May for a celebration of Floyd’s life, including music, art and family events starting at 1pm, and ending with a candlelight vigil at 8pm.

Protestors have barricaded the area from traffic since Floyd’s murder last year, and there have been calls to make the community-built memorial centred around a sculpture of a raised fist a permanent feature. Local officials, businesses and many residents have pushed to reopen the roads, however, citing outbreaks of violence in the square. Signs around the site speak to the ongoing concerns of protestors: “No Justice, No Streets.”