Artist continues efforts to bring performance art to the masses as she collaborates with file-sharing platform and its editorial arm, WePresent Marina Abramovic’s quest for world domination continues apace with her latest venture—a partnership with WePresent, the editorial arm of the file-sharing platform WeTransfer. Later this year, Abramovic will unveil a digital manifestation of The Abramovic Method on the site. According to the artist the participatory performance is “the exploration of being present in both time and space. It incorporates exercises that focus on breath, motion, stillness and concentration.” This meditative task “will be available to everyone, all day, every day, reaching 70 million people worldwide”, says the company.

“Ana Prvacki’s medium is performance, her tools are her wit and humour, through which she delivers a clear message straight to the public,” says Abramovic. A detailed text by writer and producer Allyssia Alleyne outlines Prvacki’s innovations and achievements, describing how the artist uses “music to communicate both personal and collective loss. In Lacrimoso, performed as part of Abramovic’s Sky Arts takeover in December 2020, she cried into her flute in an expression of pandemic mourning, accompanied by soprano Francesca Chiejina.”

Beijing-born Koh rose to prominence in the 2000s and dropped out of view just as quickly in 2014 when he retired from the art scene and moved to the Catskill mountains in New York (he has since exhibited in New York City, Hamburg and Los Angeles). “Early on, Terence developed a reputation for provocation and controversy, with paintings infused with semen, statues of Jesus and the Virgin Mary with oversized erections, and gold-plated chunks of excrement that sold for a purported $500,000 at Art Basel in 2007,” says Alleyne. 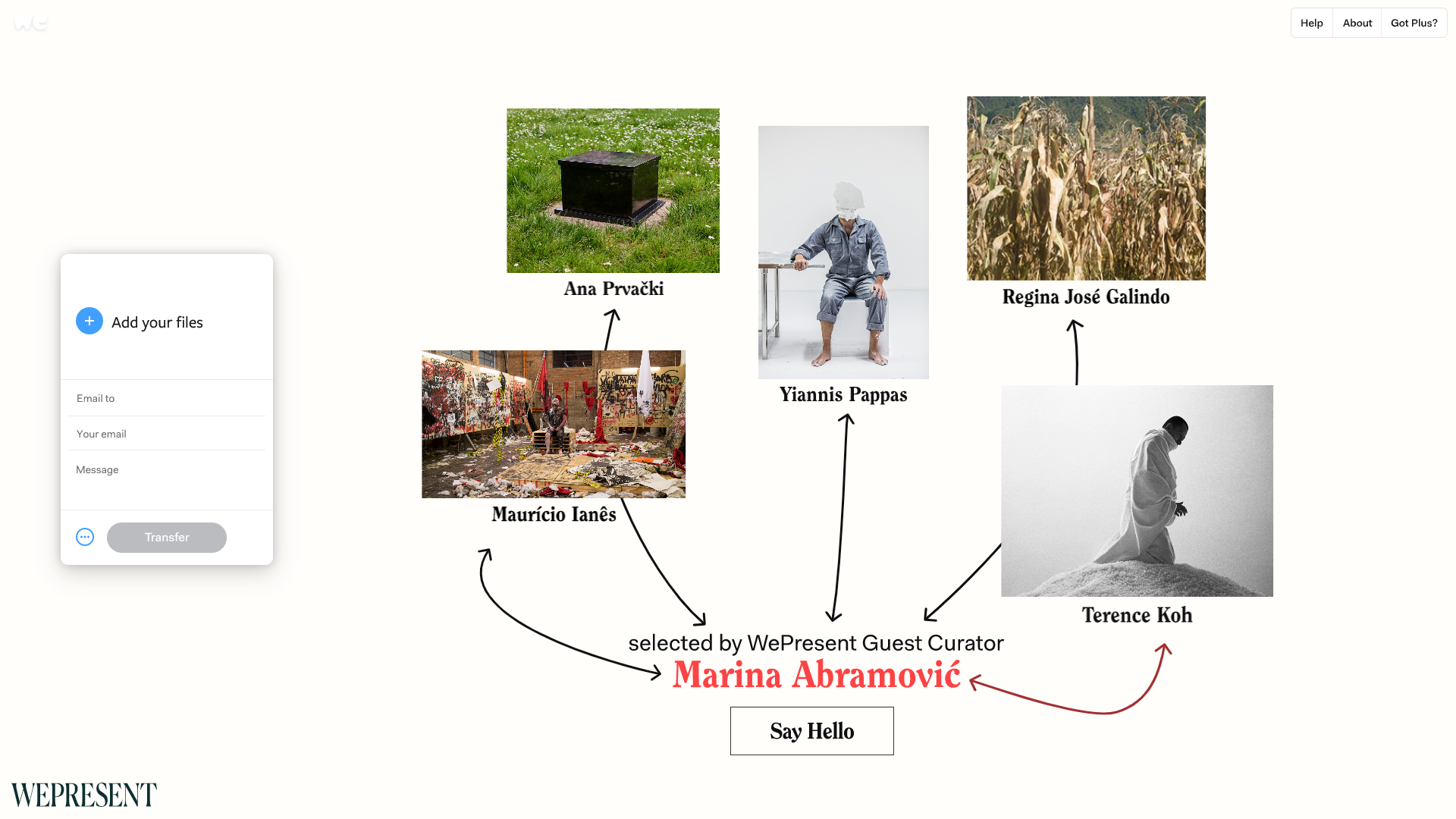 Yiannis Pappas's videos, Half-Staff (2017) and Refugio (2018), are shown on the platform. “Pappas has an anthropological and phenomenological approach to his work, using a vast range of mediums: photography, language, video, and performance. Most of the time, his own body is the centre of the work,” says Abramovic.

Holly Black’s timely commentary on Regina José Galindo points out that “encounters with ground-breaking artists such as Ana Mendieta and Teresa Margolles helped Regina grapple with the agency that could be found within her own body, one that, as a woman, she found was constantly under public scrutiny, both as a site of violence and of objectification.” Black also discusses Brazilian artist Mauricio Ianês’s confrontational art; in 2014, he invited visitors to argue the case for having their entrance ticket refunded as part of the group exhibition Something Less, Something More at the Palais de Tokyo in Paris.

WeTransfer has committed a fee to commission new works for the collaboration and in support of the Marina Abramovic Institute, which "shares WePresent’s dedication to supporting artistic talent around the world," a spokeswoman says.

"WePresent is a long-term supporter of the arts, and has collaborated with 1,000 artists from over 100 countries to date," she adds.