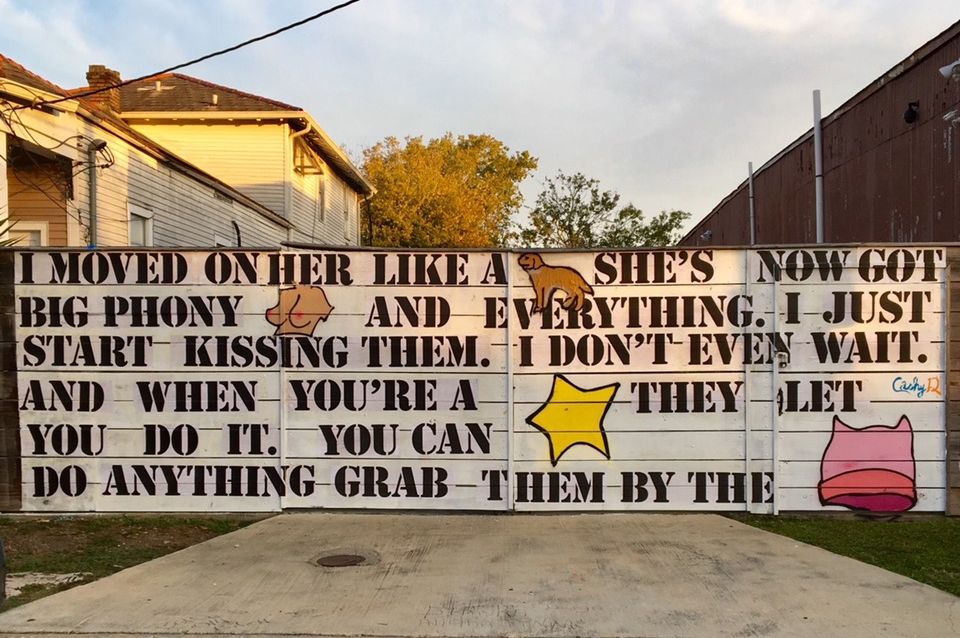 The mural, by the artist Cashy-D, depicts a quote from the 2005 Access Hollywood Tape in which US President Donald Trump brags about grabbing women’s genitals with impunity—with select nouns replaced by images Neal Morris

The American Civil Liberties Union (ACLU) has filed a lawsuit against the City of New Orleans on behalf of the resident Neal Morris, who is facing potential jail time over a mural painted on his private property that the city has demanded he remove. The mural, by the artist Cashy-D, depicts a quote from the 2005 Access Hollywood Tape in which US President Donald Trump brags about grabbing women’s genitals with impunity—with select nouns replaced by images.

“The City of New Orleans’ murals-permit scheme is a multipronged assault on the First and Fourteenth Amendments that requires Plaintiff, artists and their patrons to obtain government approval before engaging in their constitutionally protected freedom of expression,” says the court filing, dated 13 March.

“Murals are considered public art” according to the City of New Orleans Comprehensive Zoning Ordinance's on-site development standards. “No person, firm, or corporation may commence a mural installation on a site without development plan and design review approval by the Executive Director of the City Planning Commission and the Design Advisory Committee in accordance with Section 4.5. A separate application is required for each mural on a site,” it continues.

The court papers say that Morris, a real estate developer, visited City Hall last October to research the permit process, but that city officials were “unable to provide the requested information”. (In non-legal speak, Morris calls the process “whack”.) He did not file a permit for the mural before it was painted by Cashy-D on a fence next to a warehouse Morris owns on 4 November last year.

Shortly after, on 14 November, the city sent Morris a notice of a zoning violation that also said his failure to comply would yield “a maximum fine or jail time for each and every day the violation continues plus court costs”.

"Additionally, the Department of Code Enforcement issued a violation letter to the property owner for graffiti,” the spokesman continued.

“I sent the City a letter asking them to clarify their violation notice because the code section that was reference does not exist,” Morris says. “I never received a reply to that letter and I did not subsequently apply for a permit.”

The application process, which has a $500 base fee, is both unduly onerous and opaque, the ACLU argues in the court filings. “Applicants for mural permits are forced to pay exorbitant fees, submit extensive documentation, and are forbidden from installing any mural without a ‘development plan and design review’ by multiple government officials and committees.” According to the papers, the standards for approval were “vague, overbroad, uncabined or nonexistent”.

I wanted to spur that dialogue, because I think it’s an interesting question: why can the president say this un-ironically, and that’s OK, but to say it ironically with a cartoon image in New Orleans… is offensive?

According to the city zoning development standards, required submittals for approval include a “building elevation drawn to scale” with such elements as existing murals, the proposed mural’s dimensions and the building’s eave and roofline.

The court documents also allege that the city has “selectively enforced” the murals-permit scheme. For instance, a Yoko Ono Mural reading HAVE YOU SEEN THE HORIZON LATELY painted on the exterior of the Ogden Museum of Southern Art for the Prospect.4 biennial in the city does not have a permit, but has not been challenged. “Under the aegis of aesthetic regulation, the City has unconstitutionally deemed itself an arbiter of permissible artistic expression,” the court documents read. “This is exactly the kind of heavy-handed government intrusion that the First Amendment was designed to prevent,” says an ACLU blog post about the lawsuit.

Morris says he “didn’t anticipate conflict with the city”, largely due to other uncontested murals without permits. But because the city learns about and pays attention to something people complain about, they “effectively end up making restrictions on content”, he argues. (He is quick to point out, however, that he does not feel animosity towards the employees at the Department of Safety and Permits.) 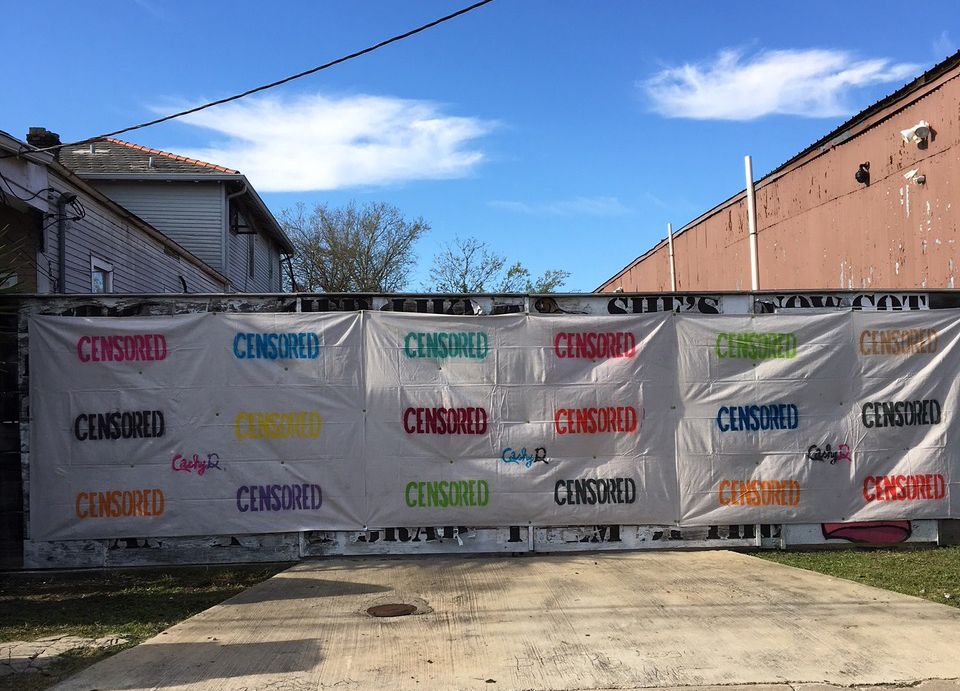 “I knew that there would be controversy over the Trump part—which I thought was welcome,” Morris says. “I wanted to spur that dialogue, because I think it’s an interesting question: why can the president say this un-ironically, and that’s OK, but to say it ironically with a cartoon image in New Orleans… is offensive?” Morris has since covered the mural with a tarp stencilled with the words "censored".

"The City is currently reviewing the lawsuit. After review, the City will determine the appropriate path forward," says the spokesman for the mayor's office.

The lawsuit, which requests an injunction to bar New Orleans from enforcing the mural ordinance and legal fees, “is about something bigger”, Morris says. He hopes that the “political pressure against the city” will lead to negotiations, and that this can serve as a model for other cities.

The ACLU’s “ultimate goal”, says Colleen Kane Gielskie, the assistant director at the ACLU of Louisiana, “is to protect not just Neal’s rights, but the rights of any other artists and residents that may be similarly targeted in the future”.

This article was amended on 22 March to include quotes from the Comprehensive Zoning Ordinance and statements from the office of the mayor of the City of New Orleans.