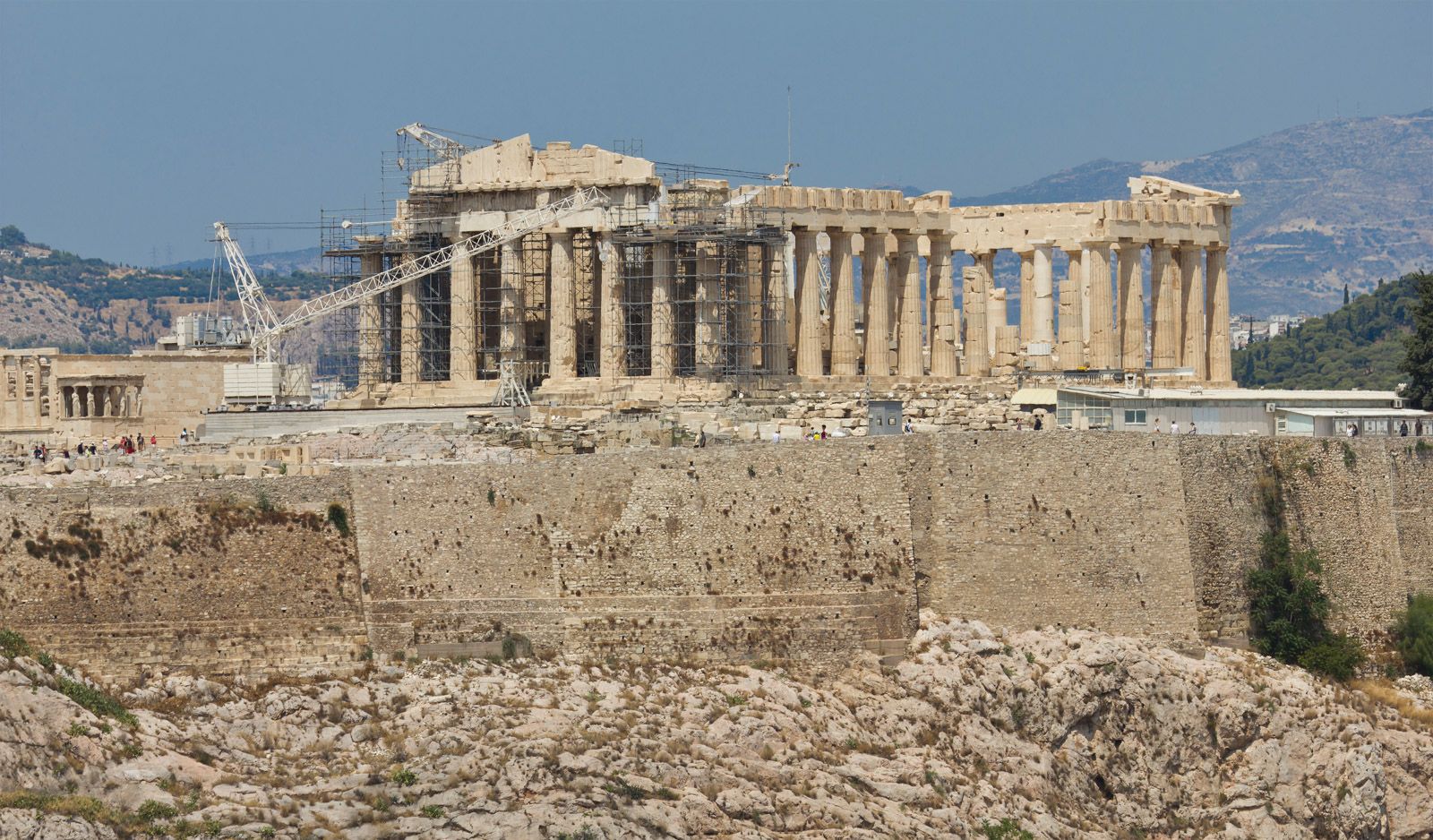 The renovations are intended to “remove erroneous interventions of the past”, says the ministry of culture, but those who oppose the project say it is “contrary to the internationally recognised principles concerning the safeguarding of antiquities” © A. Savin

Plans for a major renovation project to the western entrance of the Acropolis have met with strong opposition from archaeologists in Greece and across the world. In an open letter to the public, the signatories, including figures from the universities of Oxford, Durham and Brown, called for the -cancellation of a project they believe will lead to the “devaluation, concealment and degradation of the greatest archaeological and artistic treasure that has been bequeathed to modern Greece”.

The Acropolis is a Unesco World Heritage Site and the most visited archaeological site in Greece, welcoming more than three million visitors in 2018, according to the Hellenic Statistical Authority. The site has been subject to continual and regular restoration and excavation projects since the emergence of the independent Greek state and the choice of Athens as its capital city in the early 19th century. These have variously affected both access to, and the appearance of, the site.

This latest renovation is intended to improve access and traffic management of visitors and, according to a statement from the ministry of culture, “remove erroneous interventions of the past”. However, for the opposition, the plans are “contrary to the internationally recognised and established principles concerning the preservation, conservation and safeguarding of antiquities” and “mark an extremely dangerous path”.

Run in with archaeologists

The plans were unanimously approved by the Central Archaeological Council on 3 February, after a proposal made by the architectural restorer Manolis Korres, the president of the Acropolis Monuments Conservation Committee (ESMA). Following this approval, the ministry announced that a comprehensive scientific study will be carried out in the autumn.

The focus of the plan is on the -restoration of the ascent to the Acropolis, including a large marble staircase constructed in the first century AD, the return of an ancient southern access to the terrace and the removal of what ESMA deem to be incorrect -restoration work.

The plans show the government again at loggerheads with the archaeological community following a recent dispute regarding the legal status of Greece’s five largest archaeological museums. The signatories fear that these interventions “will change dramatically the form of the Acropolis Monument”, and will cause serious functional and conservational problems.

A major concern is what constitutes the “correct appearance” of the site. According to the critics, the planned work places a modern framework of renovation which has no basis in history. Most notably, they question why the specific form of the western access to the Acropolis in the fifth century AD has been chosen as the “correct form” of this part of the site, while for the plateau, it is the form of the fifth century BC.

The works apparently also bypass “international and national legal frameworks and standards”. In particular they state the Central Archaeological Council “examines and decides only on completed studies and not mere proposals”. This follows criticism of restoration work already done in 2020, whereby the old pathways to the Acropolis were paved with reinforced concrete and a new, larger lift access was added to upgrade access and accommodate people with disabilities.

Heavy rains in December 2020 led to flooding on the site, which the signatories state was a “predictable consequence” of the new paving. These interventions were also criticised for their negative aesthetic impact and the damage caused to the ancient architecture and the rock itself, as well as not “fulfil[ling] the stated justification” to improve disabled access. Ultimately, they say, the focus of the works was “to accommodate even larger crowds of summer tourists”.

Open-air archaeological sites were finally reopened in Greece on 21 March, following the ongoing national lockdown that began in November 2020, allowing the public and the wider archaeological community to see the impact of the works so far.

The Greek government is desperately trying to push forward with its typical summer season-—despite the ongoing Covid-19 pandemic—that is a vital part of the national economy.

Back to its original beauty

The ministry of culture could not be reached for comment; but, in a statement released on 15 March, ESMA rejected the claims of the letter, stating that the new paving is “easily reversible” and that the interventions to the Propylaea gateway will return it to its “original ancient form” of the first century AD, based on “exhaustive archaeological-architectural documentation”. They also state that the “oldest traces will not be covered but will remain visible and accessible”.

However, speaking with The Art Newspaper, Tasos Tanoulas, an architect and member of the technical staff of committee for the restoration of the Acropolis Monument since 1977, refuted these comments, in particular the reversibility of these works.