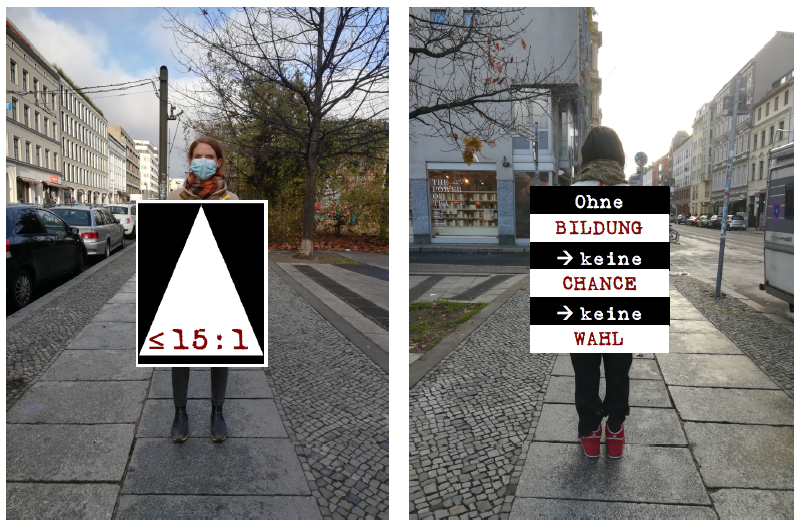 Adrian Piper and her followers will be holding sandwich boards that read ≤15:1 on one side and ‘Ohne Bildung -> keine Chance -> keine Wahl’ (Without Education -> No Chance -> No Choice) on the other © Adrian Piper Research Archive Foundation, Berlin

The New York-born artist Adrian Piper, who is based in Berlin, is planning a demonstration outside Germany’s parliament, the Bundestag, on 15 May to protest what she perceives to be overcrowding in German schools.

Piper’s demonstration, for which she says she has received permission from the police, is part of her ongoing campaign, Wahlkampagne, which she conceived in 2019 and launched in January, calling for a student-teacher ratio of no more than 15 students per class. The artist and her followers will be holding sandwich boards that read “≤15:1” on one side and “Ohne Bildung -> keine Chance -> keine Wahl” (Without Education -> No Chance -> No Choice) on the other.

The Adrian Piper Research Archive Foundation will distribute lapel pins bearing those words at the protest, and Piper has persuaded the owners of six buildings in Berlin to display the signs on their facades.

Piper tells The Art Newspaper that her goal is to emphasise the importance of education in the run-up to Germany’s general elections in September: “The German word Wahl means both ‘choice’ and ‘vote’: 2021 is election year in Germany, so Wahlkampagne is targeting Germany’s political class, virtually all of whom are up for [re-)election.”

She adds: “The aim is to encourage all German citizens and residents to surround German politicians with reminders – in front of the Bundestag, on all of the buildings and on everyone’s lapels – that a first-class education for everyone is a necessary precondition for solving any of the other pressing problems–poverty, immigration, Covid-19, climate change, political extremism–to which they regularly give pride of place.”

The number of students per class in Germany is determined by regulations in the country’s federal states, or Länder. A spokesman for Germany's ministers of education and cultural affairs says: "Germany's federal states use different assessment methods to determine the class size of various year groups and types of schools. The numbers of students in classes have generally decreased over the past few decades and vary from 13 to 33 students per class."

This is not the first time that Piper, a retired emeritus professor of the American Philosophical Association who moved to Berlin 16 years ago, has criticised Germany’s education system. In 2015, when she won a Golden Lion for best artist at the Venice Biennale, the artist wrote a letter to Germany’s federal minister of education and research to complain about “overcrowded, understaffed classes”.

Piper, who taught philosophy at six universities in the US, has also raised these issues at pedagogical conferences.