An exhibition at the Royal Geographical Society, London draws on an archive of more than 100,000 of the country, taken by military helicopter

Using military helicopters, the team of the Aerial Photographic Archive for Archaeology in the Middle East have been photographing Jordan’s archaeological sites since 1997. They have built up an archive of over 100,000 images, some of which are now on view at the Royal Geographical Society, London in an exhibition that highlights the country’s rich heritage while also drawing attention to the risks that certain sites now face.

Although taken for research and documentary reasons, the photographs in the show Aerial Archaeology in Jordan and Beyond (until 6 April) beautifully capture the country’s cultural past, from the prehistoric phase through to the Islamic Period. Well-known locations, such as the coastal city of Aqaba and Petra’s rock-hewn architecture, are featured alongside newly discovered sites and images illustrating recent damage and destruction. 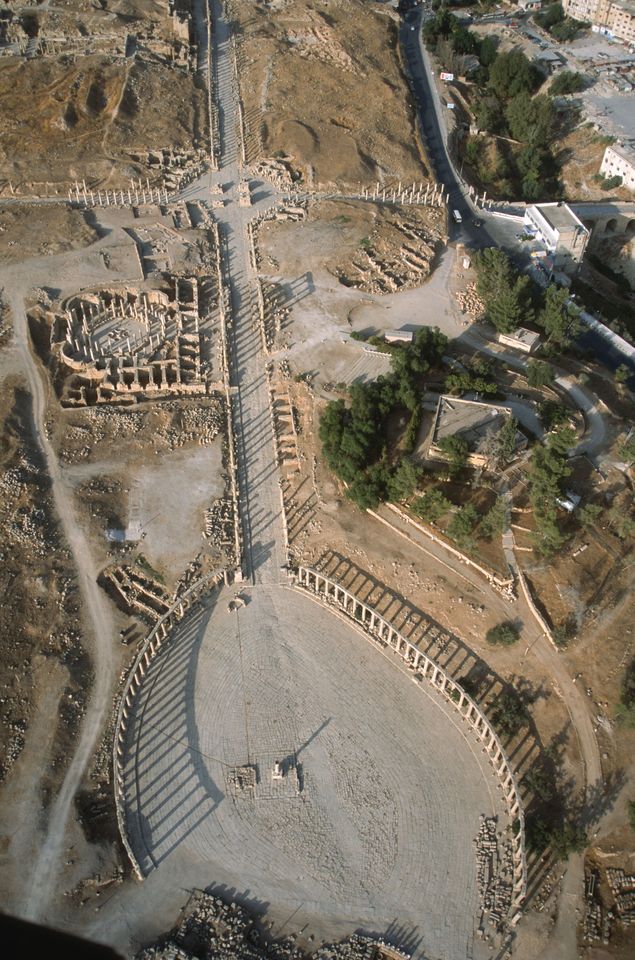 The Piazza at Jarash. © APAAME

Among the exhibition’s highlights are the unusual prehistoric earthworks known to archaeologists as “big circles”—ranging from 200m to over 450m in diameter—and “kites” which were used by desert people for hunting, capturing and killing migratory animals. There are also many images of Crusader period fortifications in dramatic settings, such as Qalat ar-Rabad and Kerak Castle.

The changes to Jordan’s landscape and archaeological damage can be seen in a number of images, such as those of Ma’an el-Hammam, which is shown untouched in 1998 but with its main site bulldozed by 2000, seemingly to make way for olive trees. Images of Early Bronze Age cemeteries dotted with pits also reveal site looting in Jordan—a much rarer occurrence than in countries such as Syria or Iraq.

• To see more images recorded by APAAME, go to their Flickr page.